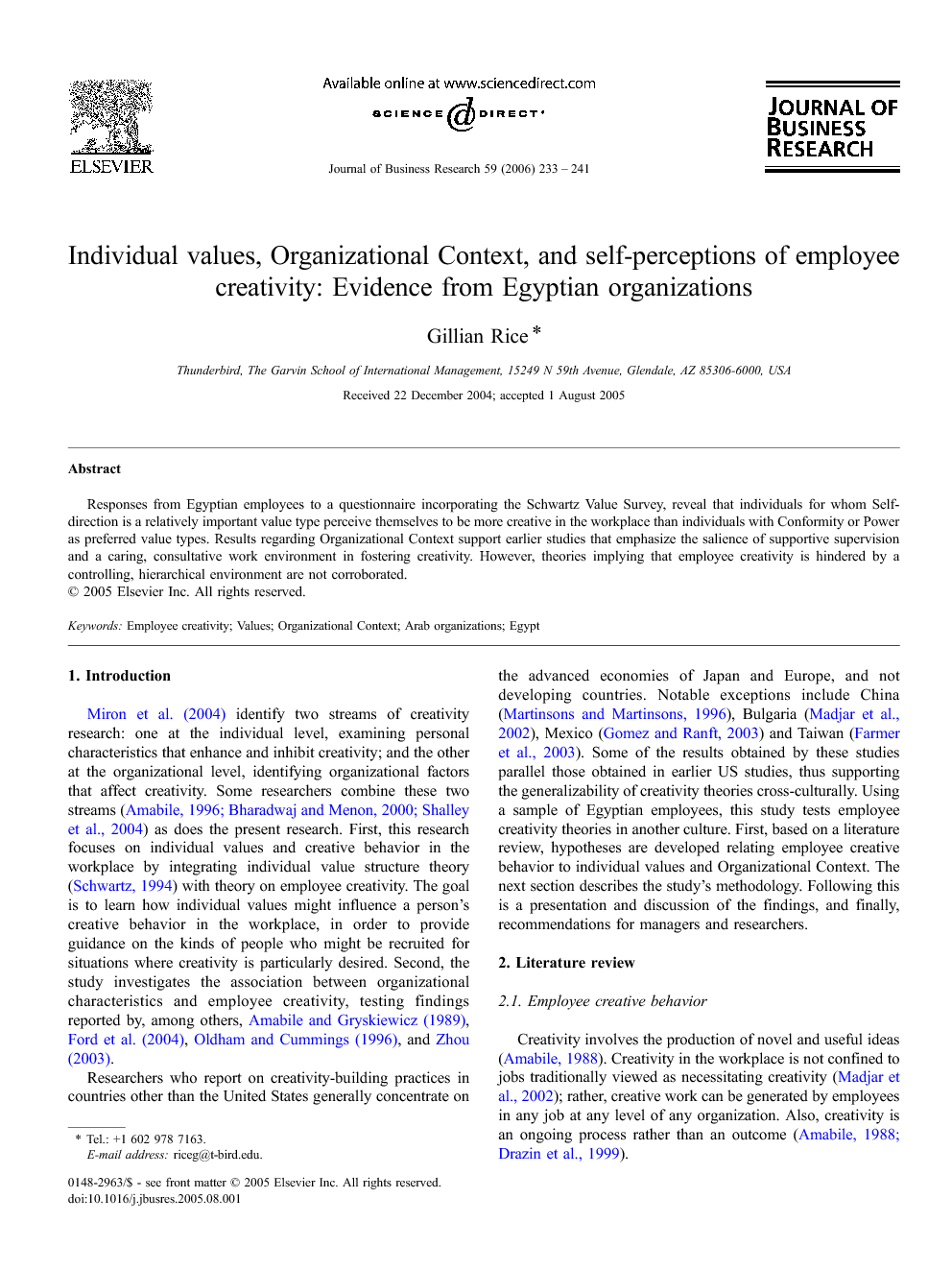 Responses from Egyptian employees to a questionnaire incorporating the Schwartz Value Survey, reveal that individuals for whom Self-direction is a relatively important value type perceive themselves to be more creative in the workplace than individuals with Conformity or Power as preferred value types. Results regarding Organizational Context support earlier studies that emphasize the salience of supportive supervision and a caring, consultative work environment in fostering creativity. However, theories implying that employee creativity is hindered by a controlling, hierarchical environment are not corroborated.

Miron et al. (2004) identify two streams of creativity research: one at the individual level, examining personal characteristics that enhance and inhibit creativity; and the other at the organizational level, identifying organizational factors that affect creativity. Some researchers combine these two streams (Amabile, 1996, Bharadwaj and Menon, 2000 and Shalley et al., 2004) as does the present research. First, this research focuses on individual values and creative behavior in the workplace by integrating individual value structure theory (Schwartz, 1994) with theory on employee creativity. The goal is to learn how individual values might influence a person's creative behavior in the workplace, in order to provide guidance on the kinds of people who might be recruited for situations where creativity is particularly desired. Second, the study investigates the association between organizational characteristics and employee creativity, testing findings reported by, among others, Amabile and Gryskiewicz (1989), Ford et al. (2004), Oldham and Cummings (1996), and Zhou (2003). Researchers who report on creativity-building practices in countries other than the United States generally concentrate on the advanced economies of Japan and Europe, and not developing countries. Notable exceptions include China (Martinsons and Martinsons, 1996), Bulgaria (Madjar et al., 2002), Mexico (Gomez and Ranft, 2003) and Taiwan (Farmer et al., 2003). Some of the results obtained by these studies parallel those obtained in earlier US studies, thus supporting the generalizability of creativity theories cross-culturally. Using a sample of Egyptian employees, this study tests employee creativity theories in another culture. First, based on a literature review, hypotheses are developed relating employee creative behavior to individual values and Organizational Context. The next section describes the study's methodology. Following this is a presentation and discussion of the findings, and finally, recommendations for managers and researchers.

To test for the structure of relations of similarity and distance among the value items in Egypt, smallest space analysis (SSA), a nonmetric multidimensional scaling technique (Guttman, 1968) was performed, on an aggregate of three Egyptian samples. One sample comprised the employees in this study. The other two consisted of a sample of high school teachers and a sample of university students. All samples were collected in Cairo by the author during the same time period. The total number of usable responses for the SSA was 502. It was necessary to analyze the three samples together in order to have a sample size that would yield reliable results. The basic set of higher order value domains (Openness to change, Conservation, Self-enhancement and Self-transcendence; see Fig. 1), and the two main oppositions were present. The coefficient of alienation was 0.290, above the conventional level for good representation of the correlation matrix, but a reasonable stress value when 57 items are represented in two-dimensional space (Ros et al., 1999). The SSA revealed 11 errors, i.e., locations of value items not in the expected regions of the theory depicted in Fig. 1. However, only six of these were for any of the 46 items that are part of the indices making up the ten value types. Only 46 items out of the 57 items included in the SVS are recommended for calculating the indices because these 46 items emerged in their postulated region in at least 75% of samples studied, or in this or adjacent regions in 95% of samples (Schwartz, 2004). Thus, for the present study, corrections had to be made to the value items that, based on the a priori theory (Schwartz, 2004), should have been included in each value type index. These corrections were made based on the SSA results for all three Egyptian samples. The items included in the indices of the value types relevant to this particular study are those italicized in Table 1. The italicized single value items representing a value type were summed, and then divided by the number of items included. Prior to forming the indices, the employee data were standardized within subjects, according to Schwartz et al. (1997).