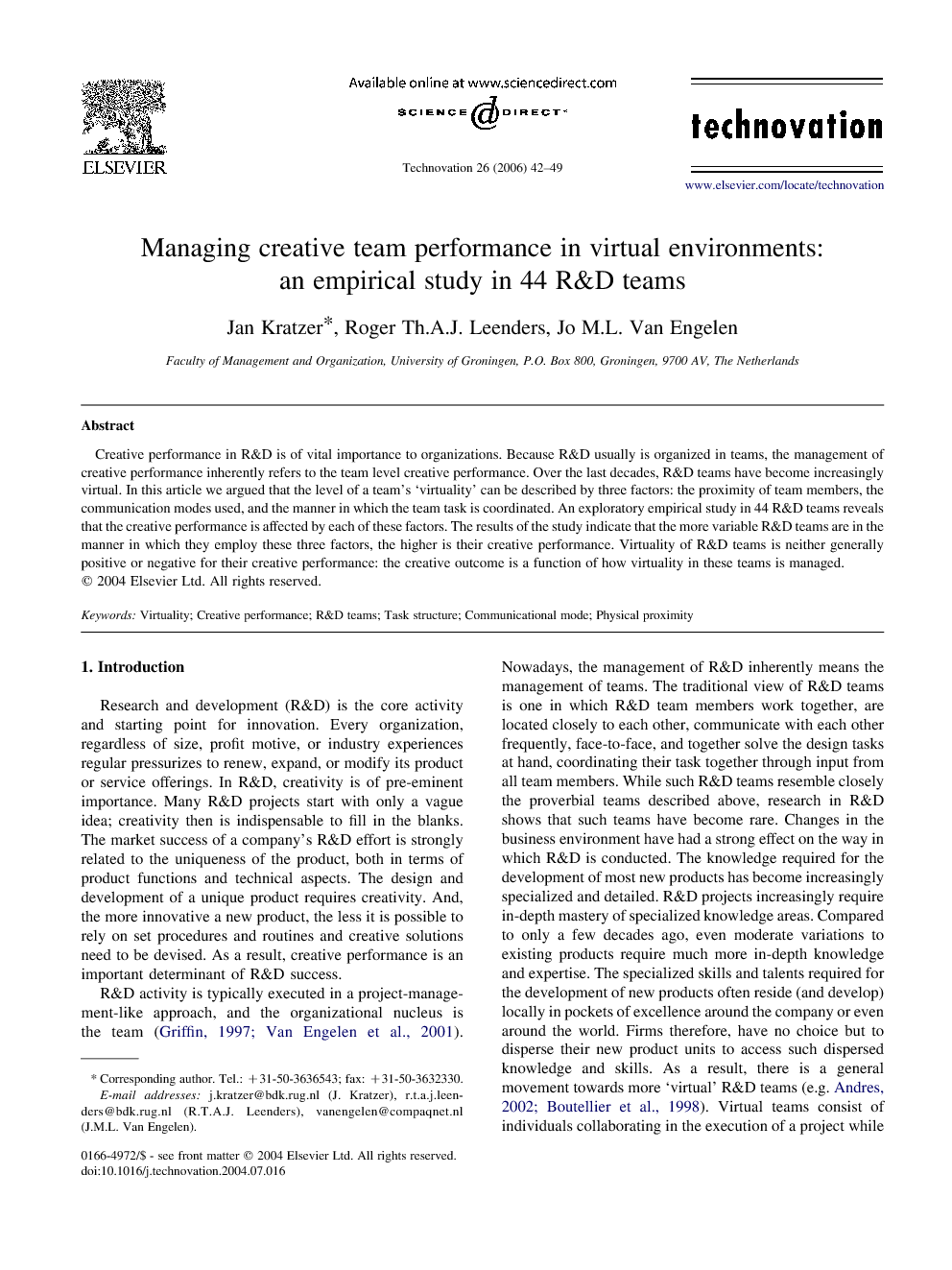 Research and development (R&D) is the core activity and starting point for innovation. Every organization, regardless of size, profit motive, or industry experiences regular pressurizes to renew, expand, or modify its product or service offerings. In R&D, creativity is of pre-eminent importance. Many R&D projects start with only a vague idea; creativity then is indispensable to fill in the blanks. The market success of a company's R&D effort is strongly related to the uniqueness of the product, both in terms of product functions and technical aspects. The design and development of a unique product requires creativity. And, the more innovative a new product, the less it is possible to rely on set procedures and routines and creative solutions need to be devised. As a result, creative performance is an important determinant of R&D success. R&D activity is typically executed in a project-management-like approach, and the organizational nucleus is the team (Griffin, 1997 and Van Engelen et al., 2001). Nowadays, the management of R&D inherently means the management of teams. The traditional view of R&D teams is one in which R&D team members work together, are located closely to each other, communicate with each other frequently, face-to-face, and together solve the design tasks at hand, coordinating their task together through input from all team members. While such R&D teams resemble closely the proverbial teams described above, research in R&D shows that such teams have become rare. Changes in the business environment have had a strong effect on the way in which R&D is conducted. The knowledge required for the development of most new products has become increasingly specialized and detailed. R&D projects increasingly require in-depth mastery of specialized knowledge areas. Compared to only a few decades ago, even moderate variations to existing products require much more in-depth knowledge and expertise. The specialized skills and talents required for the development of new products often reside (and develop) locally in pockets of excellence around the company or even around the world. Firms therefore, have no choice but to disperse their new product units to access such dispersed knowledge and skills. As a result, there is a general movement towards more ‘virtual’ R&D teams (e.g. Andres, 2002 and Boutellier et al., 1998). Virtual teams consist of individuals collaborating in the execution of a project while geographically and often even temporally distributed, possibly anywhere within (and beyond) their parent organization. Virtual teams work across boundaries of time and space by utilizing modem computer-driven technologies. The use of virtual teams is perhaps most evident in the area of R&D (Boutellier et al., 1998). Since creative performance is a vital ingredient for the success of most R&D efforts, this study explores ways how the creative performance of (virtual) R&D teams is affected by their virtual nature. We do this as follows. First, we discuss what ‘virtual’ means. As we will argue, an R&D team is not either virtual or not; rather, virtuality is a matter of degree. As a result, we consider virtuality to be a continuum, running from fully traditional to fully virtual. Next, we will describe three factors that capture how virtual a team is. We then derive three hypotheses connecting each virtuality factor to its effect on R&D team creativity. We subsequently test these hypotheses, using social network analysis methodology. We end this article with conclusions that can be drawn from our study.

Generally, the study shows that variable management of physical proximity, of the use of communication modalities, and of the manner in which the team task is coordinated has a strong effect on the creative performance of R&D teams. This result has several practical consequences. First, the creativity requirements of R&D projects are rarely-if ever-stable over time as the nature of projects and the demands imposed on them vary over time. Generally, the early stages of R&D projects require higher levels of creativity and variability than do projects that are in their final stages. Since the need for creativity varies over time, the set-up and design of the R&D team cannot remain constant. When high creative performance is necessary, high variability is productive. But when only minor levels of creativity are required, low variability scores are more productive for the team's performance. As a result, there is no general optimal level of variability, and variability itself needs to be managed. In most cases, the project and team managers have to work together to make this work. Second, managers need to evaluate their resources and managerial options for the management of team variability. For example, increasing communication variability requires the availability and support of multiple modes of communication. Not every manager can easily pull additional communication modes out of a hat. This means that managers need to know what there options are in advance, and may need to lobby for more options in time. Finally, altering variability may not require large changes to the team; many changes may be made on a local scale. For example, while managers may not necessarily have the authority to change team member proximity by physically moving members to different buildings, team member proximity can also be altered powerfully by changing places locally or by reassigning desk configuration. This article has focused on how the three factors affect creative R&D team performance. Future research will have to uncover how each factor is affected by management action. Moreover, future research may strengthen the findings of this paper. First, we measured each factor at only one point in time. Longitudinal data may reveal how creative performance is affected by each factor over time. Perhaps some factors have almost immediate effects on team creativity, whereas the effect of another factor may affect creativity more slowly. Second, in this study we have considered the joint effect of the three factors only in an exploratory fashion. Further research is warranted to study the interplay of these factors. Perhaps high variability on one factor can outweigh a lower variability on another. Or perhaps creative performance is determined by the weakest link: the factor with the lowest variability. Future research—preferably, with longitudinal data—is necessary to resolve this question. If one were to summarize the findings of this study, it would be that virtuality of R&D teams is neither generally positive nor negative for their creative performance: the creative outcome is a function of how virtuality is managed over time. If it is managed well, virtuality can make R&D teams immensely creative. If it is not, not even the most creative members will make the team truly and consistently creative.