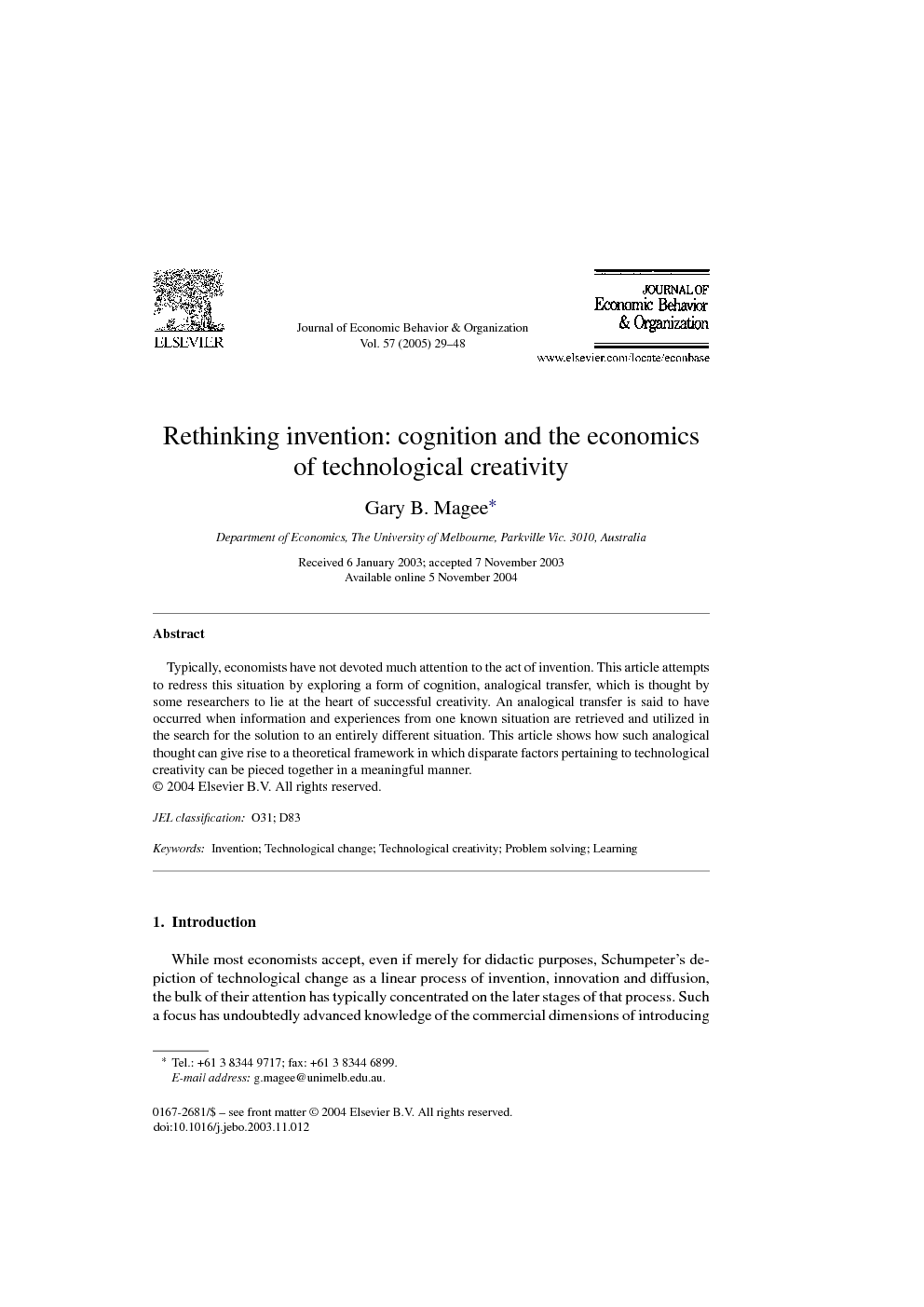 Typically, economists have not devoted much attention to the act of invention. This article attempts to redress this situation by exploring a form of cognition, analogical transfer, which is thought by some researchers to lie at the heart of successful creativity. An analogical transfer is said to have occurred when information and experiences from one known situation are retrieved and utilized in the search for the solution to an entirely different situation. This article shows how such analogical thought can give rise to a theoretical framework in which disparate factors pertaining to technological creativity can be pieced together in a meaningful manner.

While most economists accept, even if merely for didactic purposes, Schumpeter's depiction of technological change as a linear process of invention, innovation and diffusion, the bulk of their attention has typically concentrated on the later stages of that process. Such a focus has undoubtedly advanced knowledge of the commercial dimensions of introducing and developing new technologies; it has, however, shed little light on the topics of invention, technological creativity and knowledge production. Where do ideas come from? As Weitzman (1996, p. 209) notes, in economics: ‘New ideas’ are simply taken to be an exogenously determined function of ‘research effort’ in the spirit of a humdrum conventional relationship between inputs and outputs. Essentially, this approach represents a theory of knowledge production that tries to do an end run around describing the creative act that produces the new ideas. Recent evolutionary approaches to technological change have altered this situation little (Dosi, 1997 and Teece, 2000). Although firmly grounded in empirical findings, this research program has yet to provide an explicit theory of knowledge creation. Instead, such approaches offer only a description, albeit a relatively sophisticated one, of the outcome of technological creativity. They tell us that new technologies tend to be incremental, local, firm-specific, following certain clearly defined paths as determined by the reigning technological paradigm and a range of inducement mechanisms. They do not tell us, however, how new technological ideas with such characteristics actually come about. On the whole, therefore, other than a dispute over whether the process is essentially demand- or supply-driven, economics has not had much to say about invention. What explains this apparent lack of interest? There seem to be two explanations. First, it is generally believed that invention is of no economic importance, the true economic value of an idea coming of age only with the successful completion of the process of innovation. Second, it is often contended that invention simply cannot be modelled. McCloskey (1995, pp. 115–116, 119, 120), for example, has argued that ‘profitable creativity … cannot possibly be mechanical. It cannot possibly be because if it were then everyone would buy the machine and use it. The new technique would then become routine and unprofitable, contrary to the premiss’. In other words, ‘creativity itself cannot be produced by formula, or else it would already have been’. How valid are these views? Let us consider each in turn. Is invention really unrelated to innovation and, hence, unimportant? If a short-term, commercial perspective of technological change is adopted, such a statement has plausibility. A firm choosing which technology to adopt, after all, cares little about from whence the original idea for the technology came. However, when we look at the process of technological change from a broader, more dynamic perspective, it seems less persuasive. The reality of the matter is that throughout history, economies that have been technologically creative have demonstrated considerable flair in both the acts of invention and innovation (Mokyr, 1990, p. 11). This is hardly surprising; persistently successful innovation and, ultimately, sustained economic growth require a constant stream of new ideas so as to prevent diminishing returns to innovative efforts from setting in Mokyr (2002, p. 3). What of McCloskey's impossibility theorem? Clearly, she is right in stating that existing theories of creativity and invention have proved particularly impotent in producing creativeness on demand; yet, all such an exercise demonstrates is the limits of our existing knowledge, not that there are fundamental limits to what we can possibly know about the subject. McCloskey is also wrong to claim that if we did have a perfect understanding of creativity, profitable invention would come to a halt because everyone would have access to such knowledge. It would not. In the unlikely event that everyone did have a full understanding of the mechanics of creativity, there is no likelihood whatsoever that they would all produce the same, or even similar, ideas. In other words, McCloskey's hypothetical creativity ‘machine’ would not produce the same widgets. Moreover, it is worth bearing in mind that creativity is a process, not an outcome. While a specific technology can lose its profitability, the creative process almost by definition cannot. The theoretical study of creativity and invention is possible because what it aims to model is the process, not the fruit, of idea generation. Widespread use of such a model would result in an efflorescence of diverse creativity, not the multiple discoveries of the same idea. In short, then, invention and technological creativity are valid and important fields of study. This article attempts to further discussion among economists of these issues by positing a framework for the study of technological creativity. This framework can be applied at the firm, industry or national level. In the next two sections, the generation of new ideas is viewed through the visor of cognitive psychology. The implications of this analysis are discussed in Section 4.

Invention is a terra incognita of economics. While the economies of learning have become standard features of the economic analysis of technological change, they have been presented more often than not as stylized facts rather than processes whose underpinnings and determinants deserve fuller investigation. This article has attempted to begin to fill this hiatus in our knowledge by exploring a form of cognition, analogical transfer, that is thought by many researchers to lie at the heart of successful creativity. It has shown how such analogical thought can give rise to a theoretical framework in which disparate factors pertaining to creativity can be pieced together in a meaningful way. It has also shown how analogical learning is compatible with the notion of increasing returns to the production of knowledge. Of course, no claim of definitiveness is, or can be, made here. While this article has identified a number of factors that might make effective analogical thinking more probable, there can be no guarantee that such thinking will automatically follow. Nor can it articulate, other than by general abstractions and examples drawn from the histories of past inventors, how one in the future can turn an existing experience into a specific new idea. To seek a theory of creativity with such explanatory power is to wish for a philosopher's stone. Nevertheless, the study of what drives creative thought and makes certain environments more conducive to creativity is an important and worthwhile activity. The framework of creative efficiencies and experiences that has been proposed in this article merely represents a first step towards such a fuller understanding of the economics of invention. It is hoped that this article will encourage more economists to think further about the origins of new technologies.