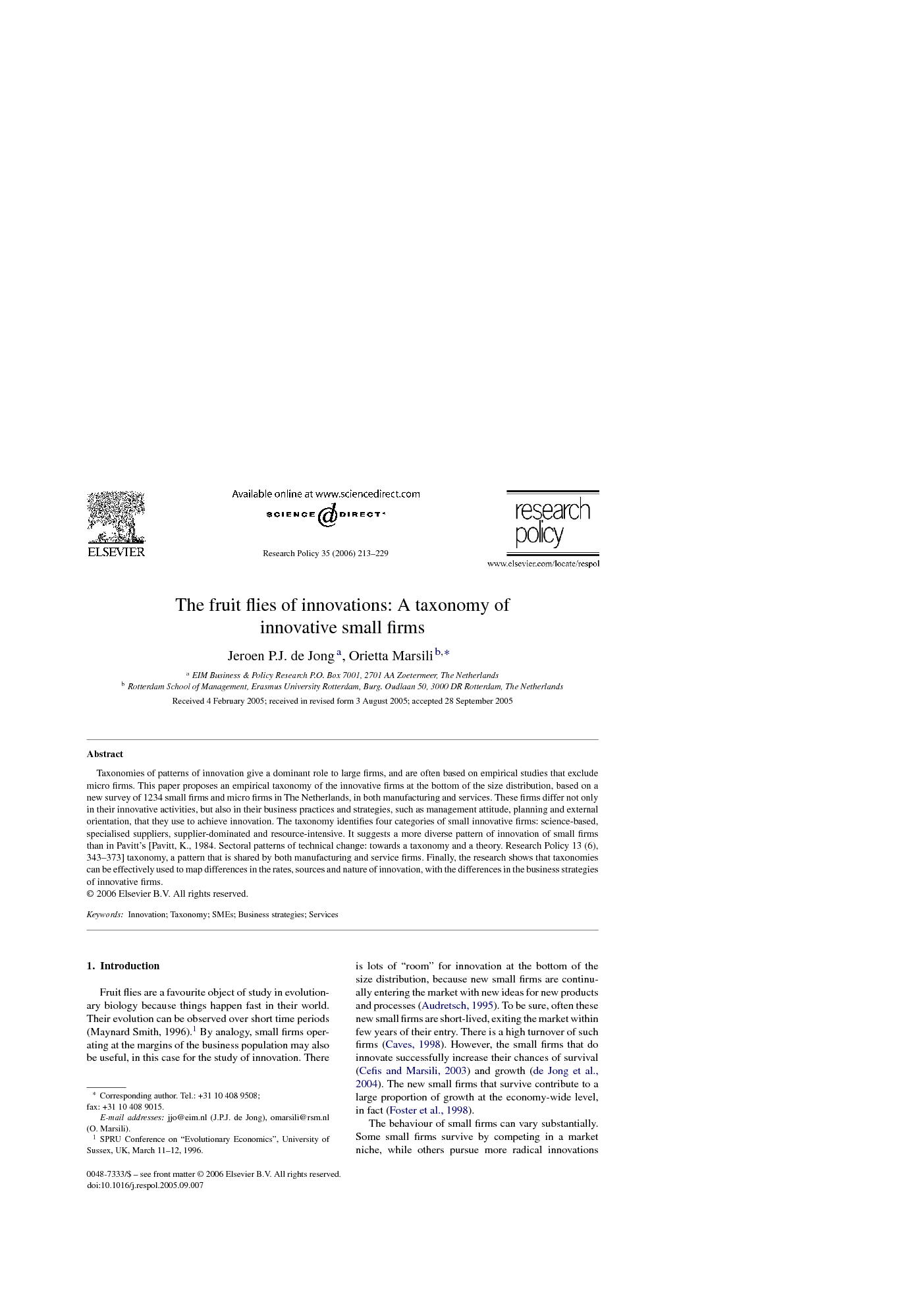 Taxonomies of patterns of innovation give a dominant role to large firms, and are often based on empirical studies that exclude micro firms. This paper proposes an empirical taxonomy of the innovative firms at the bottom of the size distribution, based on a new survey of 1234 small firms and micro firms in The Netherlands, in both manufacturing and services. These firms differ not only in their innovative activities, but also in their business practices and strategies, such as management attitude, planning and external orientation, that they use to achieve innovation. The taxonomy identifies four categories of small innovative firms: science-based, specialised suppliers, supplier-dominated and resource-intensive. It suggests a more diverse pattern of innovation of small firms than in Pavitt's [Pavitt, K., 1984. Sectoral patterns of technical change: towards a taxonomy and a theory. Research Policy 13 (6), 343–373] taxonomy, a pattern that is shared by both manufacturing and service firms. Finally, the research shows that taxonomies can be effectively used to map differences in the rates, sources and nature of innovation, with the differences in the business strategies of innovative firms.

Fruit flies are a favourite object of study in evolutionary biology because things happen fast in their world. Their evolution can be observed over short time periods (Maynard Smith, 1996).1 By analogy, small firms operating at the margins of the business population may also be useful, in this case for the study of innovation. There is lots of “room” for innovation at the bottom of the size distribution, because new small firms are continually entering the market with new ideas for new products and processes (Audretsch, 1995). To be sure, often these new small firms are short-lived, exiting the market within few years of their entry. There is a high turnover of such firms (Caves, 1998). However, the small firms that do innovate successfully increase their chances of survival (Cefis and Marsili, 2003) and growth (de Jong et al., 2004). The new small firms that survive contribute to a large proportion of growth at the economy-wide level, in fact (Foster et al., 1998). The behaviour of small firms can vary substantially. Some small firms survive by competing in a market niche, while others pursue more radical innovations and, eventually, themselves become market leaders. This diversity among new small firms cannot easily be reduced to a general model. Their variability demands a taxonomy, a classification system that can be used to identify the many variables that might be in play. Taxonomies are a regular part of evolutionary biology, and have contributed much to the study of fruit flies. The taxonomic approach is similarly beneficial to the study of small firms. There has been little study done of the innovative behaviour of small and micro firms using taxonomies. The lack of an obvious taxonomy to apply in identifying the variables to be studied may be part of the problem. As well, it could be argued that there was so much variation among small firms that no clusters of common characteristics could be identified, although the validity of this assertion can easily be demonstrated by carrying out research. The most commonly used taxonomy for identifying variables affecting innovation is Pavitt's, but Pavitt focused his study on sectors, although he examined firms. He found many commonalities amongst firms in the same sector, so much so that he spoke about industries: the chemical industry, for example. Pavitt's taxonomy focuses on large firms. Other studies that consider variables related to innovation in small firms do not pay much attention to sectors or industries. This paper takes up the challenge of studying innovation patterns in small and micro firms. It develops a classification system for such firms, based on a study of small and micro firms in The Netherlands. The results of our research provide a useful snapshot of the innovative behaviour of small firms, but they also demonstrate that the classification system that we developed to analyse variables in the innovative behaviour of these firms is very similar to that developed by Pavitt, despite the different orientations of the research. The paper begins with a theoretical discussion of several taxonomic schemes for studying innovation, which are summarized in a table at its conclusion. It then provides a discussion of other methodological issues that arose in developing a classification system for our study. Once these tasks have been done, the paper reports on the study. It concludes by discussing the relevance of Pavitt's taxonomy to the kind of study that we carried out, and it comments on the significance of the differences we found between his study and our own.

Empirical taxonomies have proven to be a useful tool for understanding the diversity of innovative behaviour that can be observed across firms. In this paper, we have attempted at extending the taxonomic approach to small firms (below 100 employees), which are often excluded or under-represented in taxonomies of innovation. In particular, within this class of firms, our research covers a dominant proportion of micro firms, that is, firms with less than 10 employees. The class of micro firms is not dealt with to any great extent in earlier empirical taxonomies of innovation. We derived a taxonomy of four types of innovative firms, with a profile that supports but also qualifies and extends Pavitt's taxonomy, as it might apply to small firms in both manufacturing and services. Table 6 summarizes the characteristics of the four clusters of firms. This table reports on the levels and relevant categories, in comparison to the mean scores for the key variables defining the taxonomy. The similarities of the first three clusters to Pavitt's taxonomy are manifest. It was appropriate for us to use the same labels. The last cluster departs from Pavitt's four categories. Although firms in this fourth category share some traits with Pavitt category of scale intensive firms, such as the combination of in-house resources and reliance on suppliers as sources of innovation, there is not much similarity with the resource-intensive firms, because our classification is not based on firm size. Notwithstanding our observation about the usefulness of Pavitt's taxonomy, we conclude that the innovation patterns in small firms are more diverse than generally believed, more diverse than was suggested in Pavitt's taxonomy, in which they are represented mainly by two categories. However, the similarity between our categories of small firms and Pavitt's taxonomy does suggest that small and micro firms can indeed play a role as the fruit flies of innovation. Small firms are more sensitive in their fast changing environment. Some of the underlying properties of technological change likely to be found in the more stable and less selective setting of large and established firms are easily found in these small firms. Second, our research shows that the diversity of patterns in service firms is at least as broad as that observed in manufacturing firms. The two sectors, manufacturing and services, share, to a large extent, many common patterns. Our research findings are consistent with the results of previous studies that have focused on classifications, following Pavitt, of the service sector. These studies have revealed highly differentiated patterns of innovation in the service firms (Evangelista, 2000). Our findings are also in line with Archibugi (2001) who proposes that the two sectors, manufacturing and services, share some of the fundamentals in the process of innovation, such as the interaction with suppliers and innovation intensity. This is also consistent with the observation that the boundaries between manufacturing and services have blurred as services and manufacturing activities are often closely bundled within organizations (Miles, 1993 and Schmoch, 2003). In our findings, we differ from Pavitt, who chose to differentiate manufacturing and services in his taxonomy. Finally, our results confirm that taxonomies of innovation that are based on differences in the patterns of innovation—as defined by the rates, sources and directions of innovation—can usefully be extended to map differences in business practices and strategies. These particular variables are especially important, as we want to capture the more informal aspects of the innovation process, the aspects that are typical of small firms. These aspects cannot be measured by traditional indicators of input and output. As in Souitaris (2002), we find that the differences in a number of strategy-related variables, such as innovation budget, business strategy and management attitude, can be systematically linked to differences in the rates, sources and nature of innovation. This supports Souitaris's view of Pavitt's taxonomy as an “integrative tool” of the management perspective and the economic perspective in the study of the determinants of innovation. Here, our research supports the usefulness of Pavitt's taxonomy. In this paper we used the firm as level of analysis of the diversity of innovation patterns. Another source of diversity resides in the type of innovation. The same firm may implement various types of innovations, especially if it is active in different product markets. Each single innovation may display different patterns. Although the degree of diversification may be expected to be less problematic for small firms than for large firms, the patterns observed at the firm level may in fact average differences at a lower level of aggregation. At the same time, the sector in which the firm is active is a source of diversity in innovation. Our results do not show a clear-cut relationship between industrial sectors and clusters of firms. Although this result may partly reflect the high level of aggregation of sectors used in the analysis, the taxonomy seems to support the existence of different “strategic groups” (Caves and Porter, 1977) within an industry. As a consequence, originally pointed out by Caves and Porter (1977, p. 251), “the industry becomes segmented but does not disappear”. A suggestion for future work is to integrate the different levels of analysis and disentangle the influence that conditions specific to single innovations and to industrial sectors have on the diverse clusters of innovative firms.