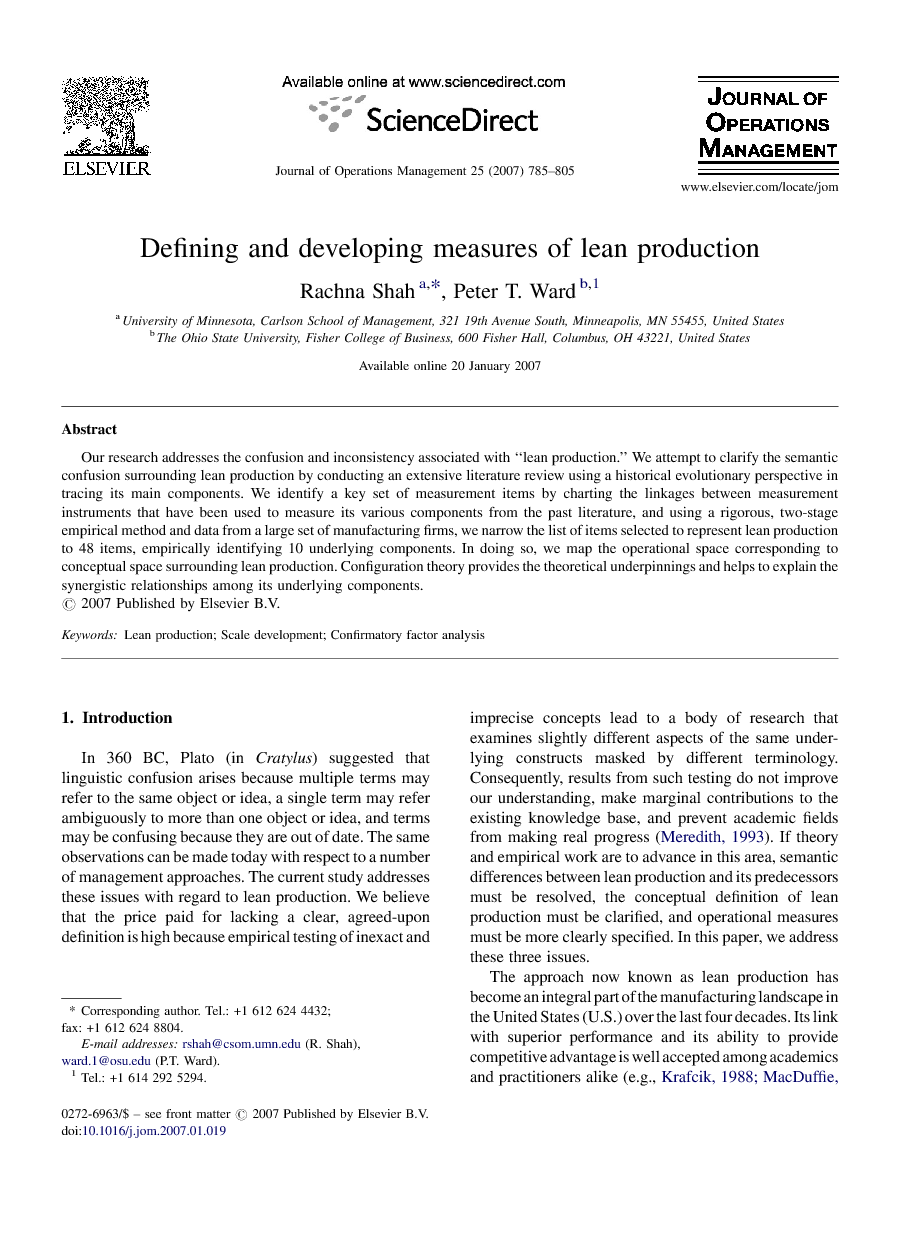 Our research addresses the confusion and inconsistency associated with “lean production.” We attempt to clarify the semantic confusion surrounding lean production by conducting an extensive literature review using a historical evolutionary perspective in tracing its main components. We identify a key set of measurement items by charting the linkages between measurement instruments that have been used to measure its various components from the past literature, and using a rigorous, two-stage empirical method and data from a large set of manufacturing firms, we narrow the list of items selected to represent lean production to 48 items, empirically identifying 10 underlying components. In doing so, we map the operational space corresponding to conceptual space surrounding lean production. Configuration theory provides the theoretical underpinnings and helps to explain the synergistic relationships among its underlying components.

In 360 BC, Plato (in Cratylus) suggested that linguistic confusion arises because multiple terms may refer to the same object or idea, a single term may refer ambiguously to more than one object or idea, and terms may be confusing because they are out of date. The same observations can be made today with respect to a number of management approaches. The current study addresses these issues with regard to lean production. We believe that the price paid for lacking a clear, agreed-upon definition is high because empirical testing of inexact and imprecise concepts lead to a body of research that examines slightly different aspects of the same underlying constructs masked by different terminology. Consequently, results from such testing do not improve our understanding, make marginal contributions to the existing knowledge base, and prevent academic fields from making real progress ( Meredith, 1993). If theory and empirical work are to advance in this area, semantic differences between lean production and its predecessors must be resolved, the conceptual definition of lean production must be clarified, and operational measures must be more clearly specified. In this paper, we address these three issues. The approach now known as lean production has become an integral part of the manufacturing landscape in the United States (U.S.) over the last four decades. Its link with superior performance and its ability to provide competitive advantage is well accepted among academics and practitioners alike (e.g., Krafcik, 1988, MacDuffie, 1995, Pil and MacDuffie, 1996, Shah and Ward, 2003 and Wood et al., 2004). Even its critics note that alternatives to lean production have not found widespread acceptance (Dankbaar, 1997) and admit that “lean production will be the standard manufacturing mode of the 21st century” (Rinehart et al., 1997, p. 2). However, any discussion of lean production with managers, consultants, or academics specializing in the topic quickly points to an absence of common definition of the concept. This lack of clarity is evident from the multiplicity of descriptions and terms used with respect to lean production. The ambiguity stems in part because lean production evolved over a long period of time (Hopp and Spearman, 2004, Womack et al., 1990 and Spear and Bowen, 1999) and because of its mistaken equivalence with other related approaches. Hopp and Spearman (2004) note that using closely related terms in the titles of some of the earliest publications may have also contributed to this confusion (see for example Sugimori et al., 1977). These primarily semantic differences between lean and its predecessors are unfortunate but can be resolved fairly easily. A greater source of confusion, however, is the more substantive disagreement about what comprises lean production and how it can be measured operationally. Our objectives in this paper are as follows. First, we attempt to resolve the semantic confusion surrounding lean production and explain the different perspectives invoked in describing it using a historical evolutionary lens. Second, in our pursuit of a commonly agreed upon definition of lean production, we propose a conceptual definition that encompasses its underlying multidimensional structure. Finally, using a rigorous empirical method, we identify a set of 48 items to measure lean production and its main components. Additionally, we chart the linkages among the items and the components and map the operational space as it corresponds to the conceptual space. In short, we develop the concept of lean production based on extant knowledge and use data from a sample of manufacturers to develop an operational measure that consists of 10 reliable and valid scales.