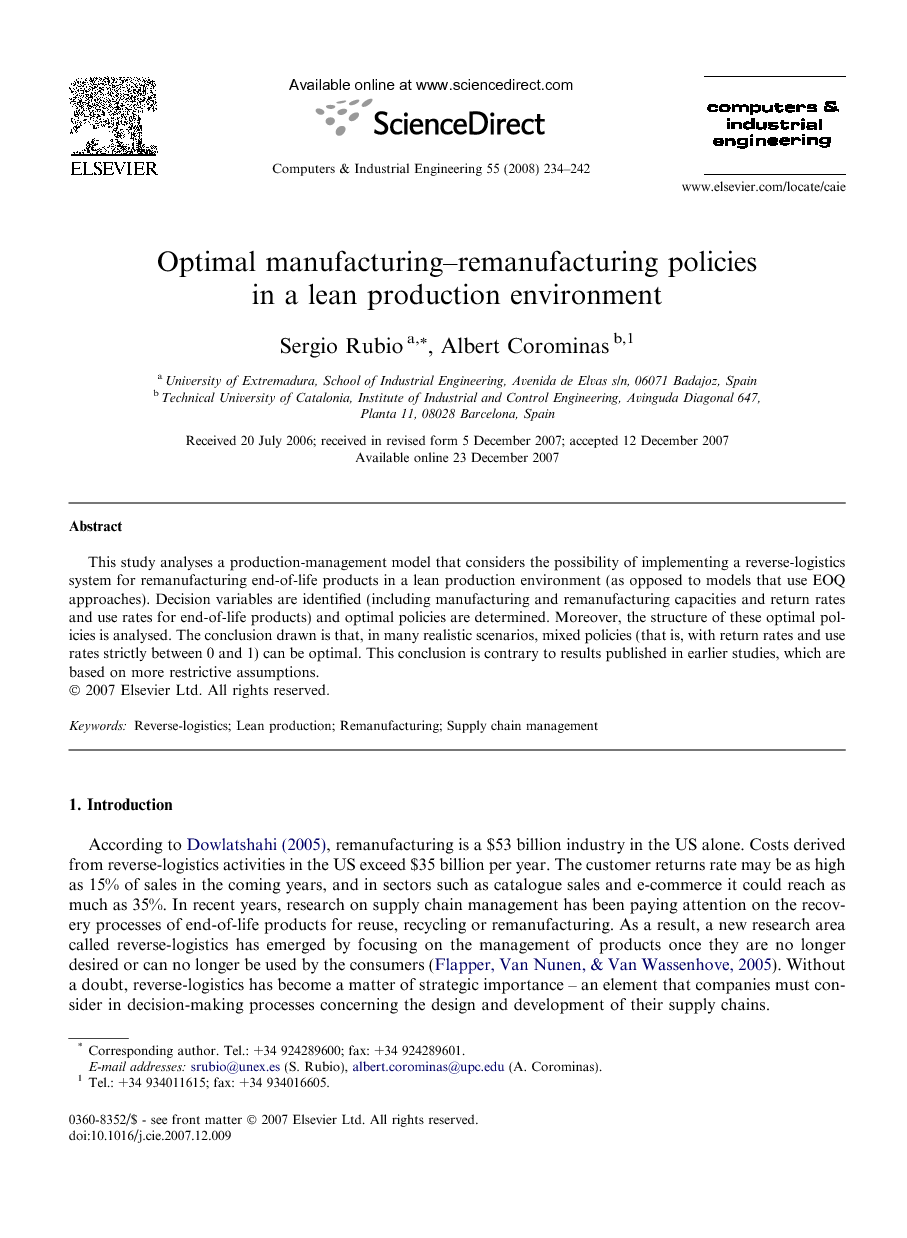 This study analyses a production-management model that considers the possibility of implementing a reverse-logistics system for remanufacturing end-of-life products in a lean production environment (as opposed to models that use EOQ approaches). Decision variables are identified (including manufacturing and remanufacturing capacities and return rates and use rates for end-of-life products) and optimal policies are determined. Moreover, the structure of these optimal policies is analysed. The conclusion drawn is that, in many realistic scenarios, mixed policies (that is, with return rates and use rates strictly between 0 and 1) can be optimal. This conclusion is contrary to results published in earlier studies, which are based on more restrictive assumptions.

According to Dowlatshahi (2005), remanufacturing is a $53 billion industry in the US alone. Costs derived from reverse-logistics activities in the US exceed $35 billion per year. The customer returns rate may be as high as 15% of sales in the coming years, and in sectors such as catalogue sales and e-commerce it could reach as much as 35%. In recent years, research on supply chain management has been paying attention on the recovery processes of end-of-life products for reuse, recycling or remanufacturing. As a result, a new research area called reverse-logistics has emerged by focusing on the management of products once they are no longer desired or can no longer be used by the consumers (Flapper, Van Nunen, & Van Wassenhove, 2005). Without a doubt, reverse-logistics has become a matter of strategic importance – an element that companies must consider in decision-making processes concerning the design and development of their supply chains. The following are the most often-cited reasons (Thierry et al., 1995, De Brito and Dekker, 2004 and Ravi et al., 2005) as to why companies establish or participate in reverse-logistics systems: 1. Economic reasons, both direct (consumption of raw materials, reduction of disposal costs, recovery of the added value of used products, etc.) and indirect (an environmentally friendly image and compliance with current and future legislation). 2. Legal reasons, because current legislation in many countries (including, for example, members of the European Union) holds companies responsible for recovering or properly disposing of the products they put on the market. 3. Social reasons, because society is aware of environmental issues and demands that companies behave more respectfully towards the natural environment, especially with regard to issues like emissions and the generation of waste. The legal reason has traditionally been viewed as having a negative effect on companies’ ability to compete, due to the costs involved in adapting processes and industrial operations to comply with regulations. Nevertheless, according to Porter and van der Linde (1995), properly designed environmental laws can spur innovations capable of compensating for the cost of compliance. These “innovation offsets” not only reduce the net cost of compliance but also generate sustainable competitive advantages by reducing overall manufacturing costs and time to market and increasing the value of the product for the consumer. Thus, in addition to companies’ legal responsibility, the potential for gaining competitive advantages by complying with environmental legislation is a further reason for adopting environmentally friendly policies such as reverse-logistics systems. This interest in reverse-logistics has attracted the attention of not only companies and professionals but also academia, which has been tackling this issue in recent years (Prahinski & Kocabasoglu, 2006). Many of the studies published on reverse-logistics have focused on aspects of production planning and inventory management (Rubio, Chamorro, & Miranda, 2008). Some of the most notable works have analysed the effects of the flow of returned products on traditional inventory-management models (see, for example, Fleischmann et al., 1997, De Brito and Dekker, 2003, Minner, 2003 and Fleischmann and Minner, 2004, for a review of the same). However, these studies assume that such a return flow exists, without questioning whether its establishment is appropriate in economic terms and in light of the traditional producer–consumer logistical structure. It seems reasonable to assume that a company considering the development of a reverse-logistics system must first analyse how the introduction of such a recovery system would affect the capacity and resources of its current production system. Traditionally, the studies that have analysed these matters have predetermined the capacity of both the production systems (manufacturing and remanufacturing) and the systems that manage them (for example, EOQ models in constant–demand scenarios), thereby obtaining results that ultimately consist of optimal strategies that call for using all available capacity in either the manufacturing process or the remanufacturing process (Richter, 1996 and Dobos and Richter, 2003 and Dobos & Richter, 2004) rather than adopting mixed strategies (manufacturing and remanufacturing). Our study explores these matters through an analysis carried out in a deterministic environment in which we assume that market demand is constant. Under this assumption, we propose a model that could be described as lean or just-in-time (JIT) production, in contrast to other models covered in the literature that are based on economic order quantity (EOQ) or some variation of this model (Harris, 1913). Lean production is one of the most influential manufacturing paradigm of recent times (Holweg, 2007) that can be considered as a multi-dimensional approach that encompasses a wide variety of management practices, including just-in-time, quality management, work teams, etc., in an integrated system that produces finished products at the pace of the customer demand with little or no waste (Shah & Ward, 2003). One of the early messages of JIT philosophy is related to ‘zero inventories’ or ‘stockless production’; in this sense, Bicheno, Holweg, and Niessmann (2001) indicate that JIT or lean thinking has raised the idea of batches should always be as small as possible, in order to achieve one-piece flow with batches sizes of one. In addition, Hines, Holweg, and Rich (2004) point out that lean production has been extended considerably over its lifespan, from automotive to manufacturing, and even to services, and indicate, as a need for research, to analyse how lean systems can be created in a ‘green field’ environment, so the application of lean thinking to remanufacturing can be regarded as a contribution in this area. The main goal of this study is to analyse under what conditions (capacity, return rate, remanufacturing rate) a reverse-logistics system should be introduced at a company that uses a JIT production-management system. The idea is for the manufacturing process to be able to adjust its capacity to the demand in order to avoid inventory generation and excess capacity. The next section briefly reviews some earlier studies that have analysed these matters. In subsequent sections we present our model, describe the assumptions and scenarios we use and illustrate them with a numerical exercise. The last section presents the main conclusions of this study.

This study proposes a model for analysing the decision to introduce a reverse-logistics system for remanufacturing used products. This model is considered in a lean production environment, unlike other models widely used in the literature that use approaches based on economic order quantity. We identified the decision variables (which include manufacturing and remanufacturing capacities, return rates, and use rates for end-of-life products) and determined the optimal policies. Our model allows us to examine the effects of modifying the capacity of the system by establishing a process of economic recovery of used products. By considering variable capacity costs, we can analyse the transfer of capacity between manufacturing and remanufacturing lines, which allows us to consider new production-management policy options. The analysis of these policies makes it clear that, in very general cases, they may be either pure or mixed. This conclusion is different from those of earlier studies, which start with assumptions that are more restrictive and probably unrealistic in many cases. Although there is a general agreement that remanufacturing is an efficient and profitable activity (Ferrer & Swaminathan, 2006) unfortunately it is still a minority option for most Original Equipment Manufacturers (OEMs) that decide not adopt the remanufacturing option because of cost and internal cannibalization (Ferguson & Toktay, 2006). Nevertheless, remanufacturing is an emerging market with many opportunities for OEMs. The results of this paper show that remanufacturing is compatible with lean production practices and the implementation of a mixed strategy that combines manufacturing, partial recovery, disposal and remanufacturing can generate economic advantages helping to companies to improve their competitiveness.