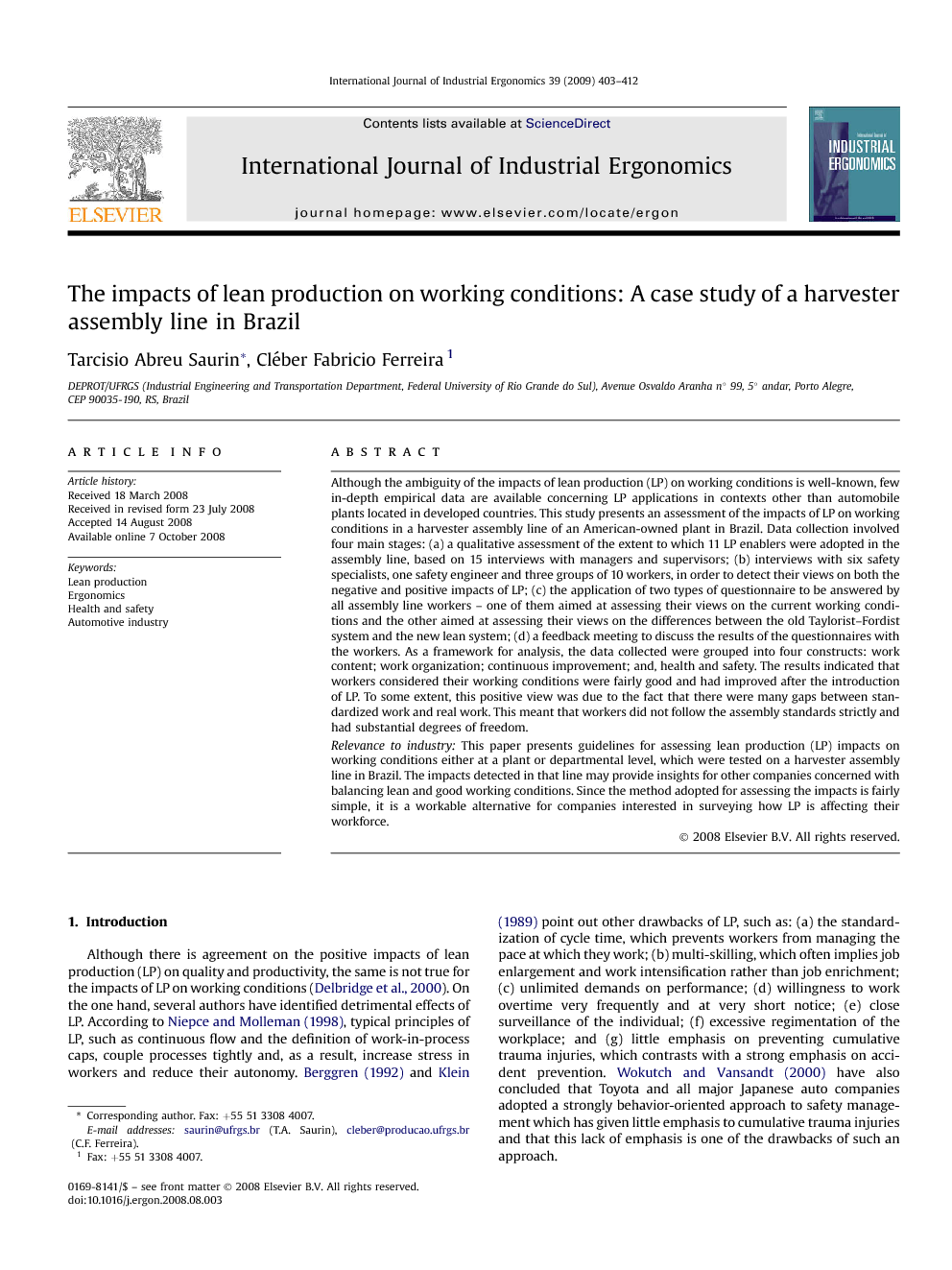 Although the ambiguity of the impacts of lean production (LP) on working conditions is well-known, few in-depth empirical data are available concerning LP applications in contexts other than automobile plants located in developed countries. This study presents an assessment of the impacts of LP on working conditions in a harvester assembly line of an American-owned plant in Brazil. Data collection involved four main stages: (a) a qualitative assessment of the extent to which 11 LP enablers were adopted in the assembly line, based on 15 interviews with managers and supervisors; (b) interviews with six safety specialists, one safety engineer and three groups of 10 workers, in order to detect their views on both the negative and positive impacts of LP; (c) the application of two types of questionnaire to be answered by all assembly line workers – one of them aimed at assessing their views on the current working conditions and the other aimed at assessing their views on the differences between the old Taylorist–Fordist system and the new lean system; (d) a feedback meeting to discuss the results of the questionnaires with the workers. As a framework for analysis, the data collected were grouped into four constructs: work content; work organization; continuous improvement; and, health and safety. The results indicated that workers considered their working conditions were fairly good and had improved after the introduction of LP. To some extent, this positive view was due to the fact that there were many gaps between standardized work and real work. This meant that workers did not follow the assembly standards strictly and had substantial degrees of freedom.

Although there is agreement on the positive impacts of lean production (LP) on quality and productivity, the same is not true for the impacts of LP on working conditions (Delbridge et al., 2000). On the one hand, several authors have identified detrimental effects of LP. According to Niepce and Molleman (1998), typical principles of LP, such as continuous flow and the definition of work-in-process caps, couple processes tightly and, as a result, increase stress in workers and reduce their autonomy. Berggren (1992) and Klein (1989) point out other drawbacks of LP, such as: (a) the standardization of cycle time, which prevents workers from managing the pace at which they work; (b) multi-skilling, which often implies job enlargement and work intensification rather than job enrichment; (c) unlimited demands on performance; (d) willingness to work overtime very frequently and at very short notice; (e) close surveillance of the individual; (f) excessive regimentation of the workplace; and (g) little emphasis on preventing cumulative trauma injuries, which contrasts with a strong emphasis on accident prevention. Wokutch and Vansandt (2000) have also concluded that Toyota and all major Japanese auto companies adopted a strongly behavior-oriented approach to safety management which has given little emphasis to cumulative trauma injuries and that this lack of emphasis is one of the drawbacks of such an approach. On the other hand, positive impacts of LP on working conditions have also been emphasized. The study of Berggren (1992), which was based on the analysis of Japanese transplants into the US and European auto industry, identified a set of these impacts, such as: (a) job security; (b) its egalitarian character (i.e. white-collar employees and blue-collar employees enjoy similar status); (c) a carefully selected and highly qualified workforce and; (d) management giving value to workers' proposals for improvement. Jackson and Mullarkey (2000) identified both positive and negative effects of LP in terms of autonomy, physical demands and social climate. The ambiguity of the impacts of LP on working conditions was also detected by Ferreira (2006), who analyzed 52 scientific articles on the subject, and listed the number of positive or negative impacts that were cited. Overall, 48% of the citations referred to positive impacts and 52% referred to negative impacts, even though most studies indicated that positive and negative impacts occurred simultaneously (Ferreira, 2006). In addition to the intrinsic characteristics of LP, such ambiguity may also be caused by a number of factors, such as: (a) the influence of each company's organizational culture, especially the extent to which safety and ergonomics are core values; (b) the different levels of maturity of companies' lean systems, which in turn are dependent on a set of variables (e.g. the types of products and processes, the length of time since LP was adopted); (c) the socio-economic context of the region where the plant is located (e.g. unemployment rates; labor standards, the role of unions); (d) the level of workforce involvement in the LP implementation process. Also, Schouteten and Benders (2004) consider that the ambiguity is due to the lack of an external assessment framework supported by validated research instruments. In line with these arguments, Mullarkey et al. (1994) and Jackson and Martin (1996) concluded that LP is not necessarily detrimental to working conditions, since, to a large extent, this depends on the context in which it is implemented. It does depend heavily on management choices in designing and operating lean systems (Conti et al., 2006). Moreover, individuals' views of their jobs are determined both by their actual working conditions and earlier experiences and by their living conditions in general (Berggren, 1992). Therefore, workers' satisfaction with LP may greatly vary depending on whether they are in a Taylorist–Fordist environment or one that has been socio-technically designed. Since the use of surveys has been the most frequent research strategy to evaluate the human impacts of LP, it has been difficult to undertake deep investigations into this issue based on qualitative data. For instance, surveys have been conducted by Conti et al., 2006, Angelis, 2004 and Sepälä and Klemola, 2004 and Lewchuk et al. (2001). Landsbergis et al. (1999) and Dankbaar (1997) have discussed the subject based on reviews of the literature, without the support of empirical data. Some of these studies, such as the one undertaken by Kato and Rob (1993), seem to be biased by ideological points of view. Polarization in the debate and the strong influence of ideological positions in some studies were also detected by Schouteten and Benders (2004). Also, since most previous studies have not carried out an investigation into the extent to which LP has been adopted (Conti et al., 2006), there is the risk of characterizing LP either as positive or negative to workers without evaluating the extent to which the work environment is in fact lean. In this respect, most studies take organizations as a whole, which is a drawback since the level of LP implementation may vary across company departments. With regard to the drawbacks of previous studies, it seems to be necessary to carry out further investigations into the impacts of LP on working conditions. In this context, this study seeks to present guidelines for assessing LP impacts on working conditions either at a plant or departmental level. The guidelines were applied to the harvester assembly line of a manufacturer of heavy machinery in Brazil. Differently from most previous similar studies, data collection involved extensive face-to-face interviews with workers and managers as well as plenty of opportunities for direct observations of the work environment and a qualitative assessment of the LP enablers on the shop floor. Moreover, the plant under study is located in a developing nation, which is in contrast with previous studies that have mostly focused on plants in the USA and Europe. This study is based on the assumption that, due to the wide possible variations in organizational contexts and the maturity levels of instances of LP implementation, it is key that companies conduct assessments of the impacts of LP on working conditions for their specific reality, so they can identify their particular drivers for either positive or negative impacts.

Differently from most previous assessments of LP impacts on working conditions, which were based on surveys, this study was based on multiple sources of evidence, such as face-to-face interviews, questionnaires, direct observations and the analysis of production procedures. However, the fairly large number of issues raised by workers and managers during the interviews made it difficult to perform a deep investigation into every topic encompassed by the four constructs established for data analysis (work content; work organization; continuous improvement; and, health and safety). Another drawback was that the company did not allow the collection of some data that had been included in the original design of the study. Such constraints were particularly detrimental for assessing the LP impacts on issues that required quantitative evidence, such as work intensity and work pace (e.g. in these cases, data on cycle times and pauses would be necessary). It is also worth emphasizing that this piece of research was conducted during a period of economic crisis in the company under study, and this is likely to have had an impact on the results. In particular, workers emphasized that job insecurity was a source of stress and, because of this, they may have been less demanding in terms of seeking good working conditions. Nevertheless, the results indicated that workers considered that their working conditions were fairly good and that they had improved after the introduction of LP. To a certain extent, this positive view was due to the fact that there were substantial gaps between standardized work and real work – this gap meant that workers did not follow strictly assembly standards and had substantial degrees of freedom. It is likely that three factors have contributed to this gap: (a) the complexity of the product (as a basis for comparison, a harvester is a substantially more complex and larger vehicle than an average car), which made it difficult to devise strict assembly standards; (b) the long cycle times (i.e. about 50 min), which was a result of product complexity; (c) the workforce was formed by fairly experienced personnel (84% had been in the assembly line for at least three years), who had probably developed shortcuts and adaptive assembly strategies. Since the company applied the assessment method used in this study on a regular basis, useful data would be continually available for integrating ergonomics and LP. For instance, an action plan based on the results of this study should include measures to involve the workforce in the work standardization process. In this respect, the action plan should also question the extent to which work standardization is feasible and necessary for such a complex product like a harvester. A natural sequel to this study would be to apply a similar research method to assess the LP impacts on the working conditions of white-collar employees. A deep assessment of the impact of specific lean enablers (e.g. continuous flow and standardization) on working conditions could also provide new insights. Moreover, this study reinforced the conclusion that LP and ergonomics are not necessarily in conflict and that there are plenty of opportunities for synergy between both areas.