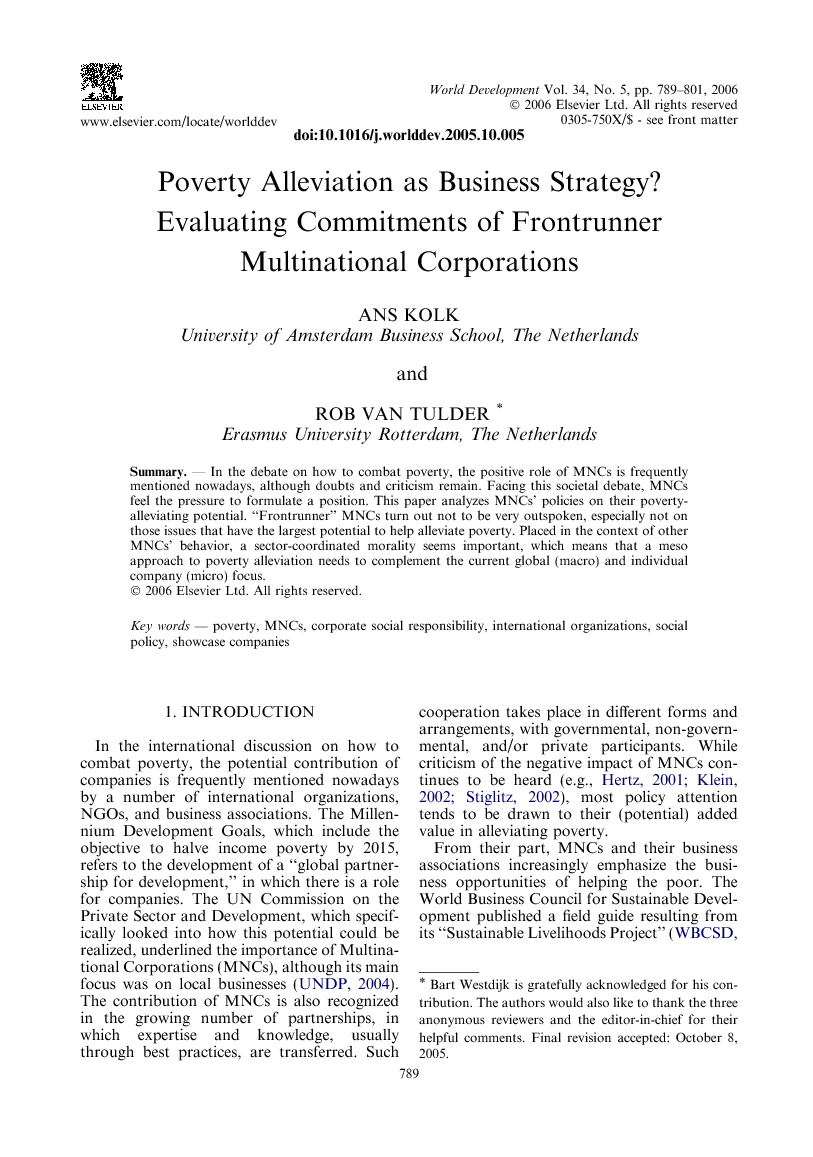 In the debate on how to combat poverty, the positive role of MNCs is frequently mentioned nowadays, although doubts and criticism remain. Facing this societal debate, MNCs feel the pressure to formulate a position. This paper analyzes MNCs’ policies on their poverty-alleviating potential. “Frontrunner” MNCs turn out not to be very outspoken, especially not on those issues that have the largest potential to help alleviate poverty. Placed in the context of other MNCs’ behavior, a sector-coordinated morality seems important, which means that a meso approach to poverty alleviation needs to complement the current global (macro) and individual company (micro) focus.

In the international discussion on how to combat poverty, the potential contribution of companies is frequently mentioned nowadays by a number of international organizations, NGOs, and business associations. The Millennium Development Goals, which include the objective to halve income poverty by 2015, refers to the development of a “global partnership for development,” in which there is a role for companies. The UN Commission on the Private Sector and Development, which specifically looked into how this potential could be realized, underlined the importance of Multinational Corporations (MNCs), although its main focus was on local businesses (UNDP, 2004). The contribution of MNCs is also recognized in the growing number of partnerships, in which expertise and knowledge, usually through best practices, are transferred. Such cooperation takes place in different forms and arrangements, with governmental, non-governmental, and/or private participants. While criticism of the negative impact of MNCs continues to be heard (e.g., Hertz, 2001, Klein, 2002 and Stiglitz, 2002), most policy attention tends to be drawn to their (potential) added value in alleviating poverty. From their part, MNCs and their business associations increasingly emphasize the business opportunities of helping the poor. The World Business Council for Sustainable Development published a field guide resulting from its “Sustainable Livelihoods Project” (WBCSD, 2004). The description of almost 20 cases served to underline the fact that “doing business with the poor” could help MNCs to reach a so far largely untapped market of four billion potential customers. This is thus not just philanthropy, but a corporate social responsibility (CSR) strategy that also makes economic sense and can give companies active in this way a competitive edge (cf., Prahalad & Hart, 2002). Such a perspective posits that MNCs can realize this by focusing on activities related to their core competencies and unique resources and capabilities (see, Barney, 1991 and Hamel and Prahalad, 1990), utilizing local capabilities and knowledge about markets, production, and distribution, and external expertise through partnerships. MNCs might then “do good” in both an economic and a societal sense at the same time, thus addressing criticisms that companies need to concentrate on profit maximization and not be distracted from that objective (Henderson, 2001 and Whetten et al., 2002). While the potential and opportunities of MNCs in relation to poverty alleviation are receiving considerable attention, the exact components for fulfilling such a role, in the context of international efforts to delineate poverty and the contribution of MNCs in this regard, have hardly been addressed—let alone that their actual policies have been evaluated in this way. As an exploratory contribution, this paper develops a framework to analyze MNC policies, using the poverty issues outlined by international organizations. It subsequently examines to what extent MNCs that present themselves as frontrunners address the different elements in their policy statements. On the basis of these results, policy options for involving MNCs in poverty alleviation are also discussed, as part of an evaluation of their strategic position vis-à-vis other MNCs. In the first section, this broader background of MNCs and poverty—sometimes placed in the context of CSR—will be indicated briefly.