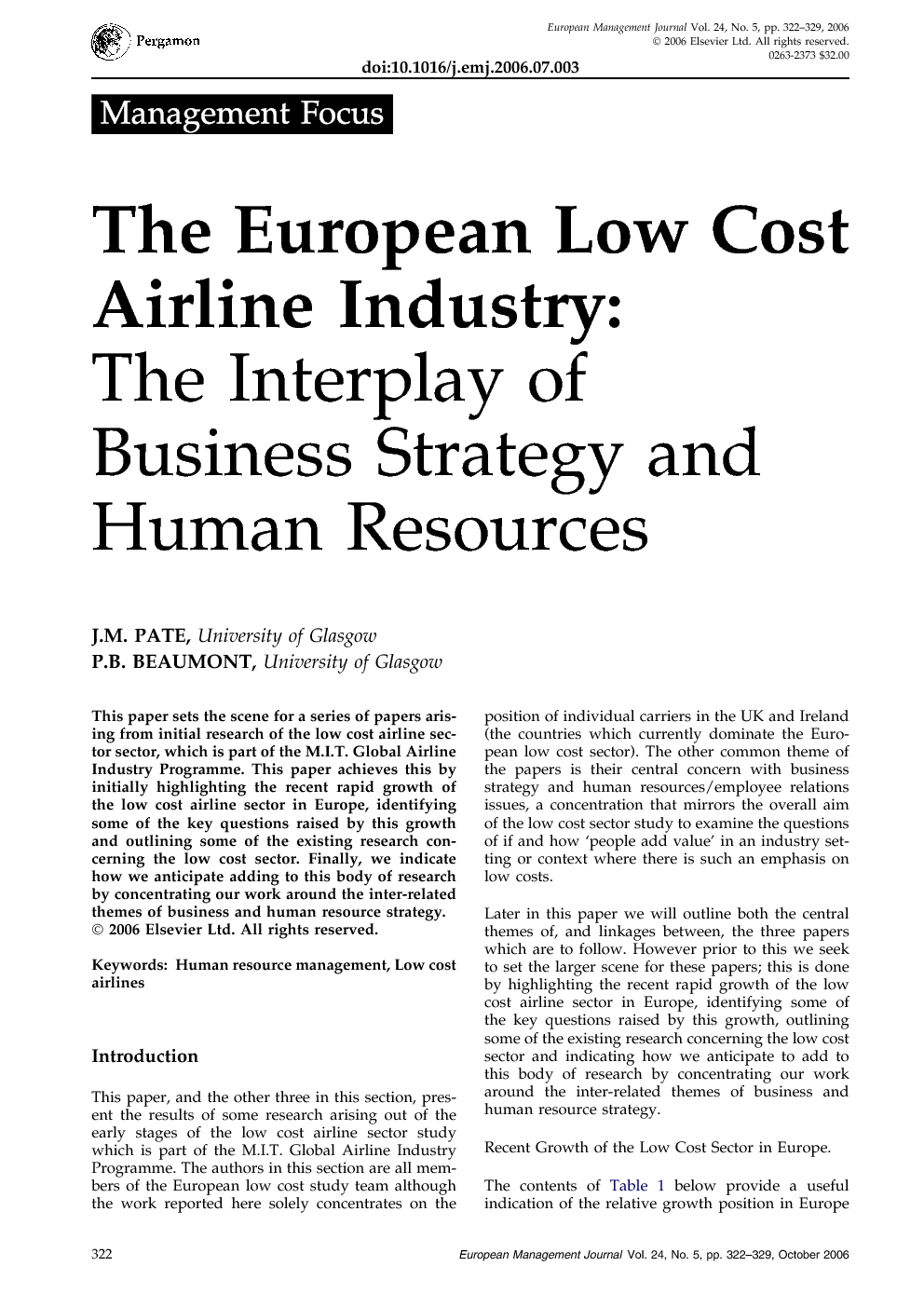 This paper sets the scene for a series of papers arising from initial research of the low cost airline sector sector, which is part of the M.I.T. Global Airline Industry Programme. This paper achieves this by initially highlighting the recent rapid growth of the low cost airline sector in Europe, identifying some of the key questions raised by this growth and outlining some of the existing research concerning the low cost sector. Finally, we indicate how we anticipate adding to this body of research by concentrating our work around the inter-related themes of business and human resource strategy.

This paper, and the other three in this section, present the results of some research arising out of the early stages of the low cost airline sector study which is part of the M.I.T. Global Airline Industry Programme. The authors in this section are all members of the European low cost study team although the work reported here solely concentrates on the position of individual carriers in the UK and Ireland (the countries which currently dominate the European low cost sector). The other common theme of the papers is their central concern with business strategy and human resources/employee relations issues, a concentration that mirrors the overall aim of the low cost sector study to examine the questions of if and how ‘people add value’ in an industry setting or context where there is such an emphasis on low costs. Later in this paper we will outline both the central themes of, and linkages between, the three papers which are to follow. However prior to this we seek to set the larger scene for these papers; this is done by highlighting the recent rapid growth of the low cost airline sector in Europe, identifying some of the key questions raised by this growth, outlining some of the existing research concerning the low cost sector and indicating how we anticipate to add to this body of research by concentrating our work around the inter-related themes of business and human resource strategy. Recent Growth of the Low Cost Sector in Europe. The contents of Table 1 below provide a useful indication of the relative growth position in Europe of the low cost sector in the early years of this century. For present purposes the most revealing figures in Table 1 are that the European growth rate in the number of flights (140%) was nearly three times the growth rate for the sector as a whole (48%). By 2004 there were 60 low cost airlines in Europe, carrying 80 million passengers (up from 47 million in 2003). This involved some 20% of the European market, a figure predicted to rise to 40% by 2010 (Economist, January 27th, 2005). In late 2005 we conducted a web-based exercise which revealed over 70 low cost airlines at the time; these were geographically dispersed with clusters in both east and west Europe. As the Economist put it (27th January 2005): “although the low cost revolution began in Britain and Ireland, and is still best established in these two countries… the new EU members in Central Europe are the latest to catch the bug”. There are two broad types of low cost carriers: (1) the free-standing ones such as Ryanair and EasyJet and (2) the airline within an airline such as bmibaby within the BMI group. Some Key Questions Raised by this Growth. This recent, rapid growth of the low cost sector in Europe obviously raises key questions for the established more conventional full service carriers (how will they respond?) and for the low cost carriers themselves. In the case of the latter, the first, and most obvious, question is whether all existing low cost carriers will survive the combination of short run pressures (e.g. the recent rises in crude oil) and longer term developments in the industry such as increasingly saturated markets and more extensive and intensive head to head competition within the low cost sector? The answer is almost certainly no! Indeed Air Polonia, V-Bird, Volare and Eujet are just some examples of recent low cost airlines which have suspended operations. More generally, as some industry commentators have put it (McKinsey Quarterly, August 2005): “… all the ingredients are in place for the low cost segments consolidation, and airlines need a strategy to manage it. Ryanair and EasyJet together account for about 50% of the seat capacity in Europes low cost market. From 2000 to 2004, Ryanair had an average operating margin of 29.4%, EasyJet 8.9% and all other companies combined had −3.5%. Many of today’s names will be gone in the short to medium term.” As well as managing these consolidation challenges, the existing low cost carriers will also need to control their costs, identify new sources of revenue and reassess their basic business model. The changing nature of the latter will be a major theme of the next section of this paper. As background to the discussion of the next section Table 2 presents some relevant business performance measures for Ryanair; the largest low cost airline in Europe. What is particularly instructive for our purposes is to place the contents of this Table alongside the contents of Table 3, which looks at the human resource/ employment record of Ryanair in the period 2000–2005.