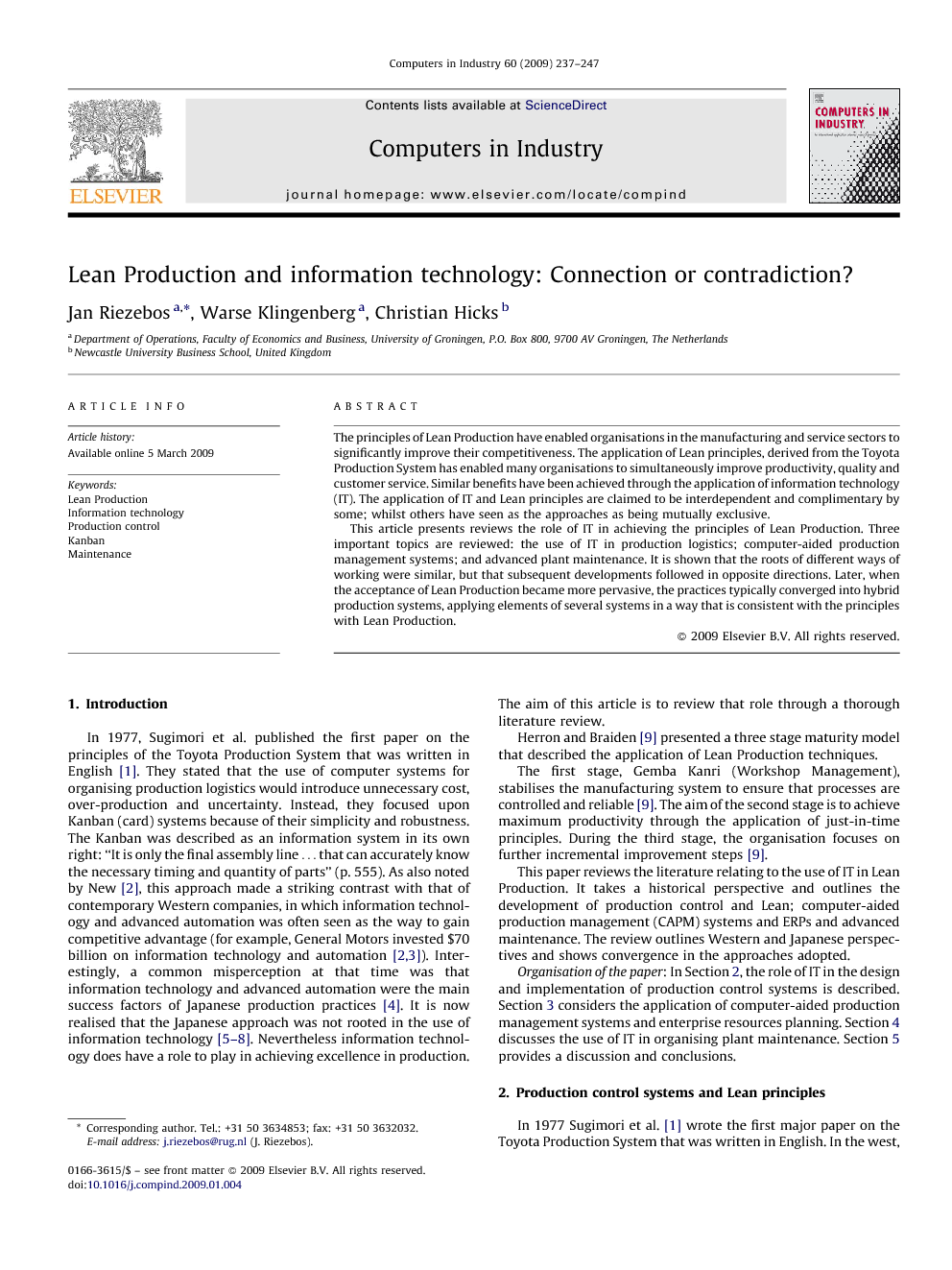 The principles of Lean Production have enabled organisations in the manufacturing and service sectors to significantly improve their competitiveness. The application of Lean principles, derived from the Toyota Production System has enabled many organisations to simultaneously improve productivity, quality and customer service. Similar benefits have been achieved through the application of information technology (IT). The application of IT and Lean principles are claimed to be interdependent and complimentary by some; whilst others have seen as the approaches as being mutually exclusive. This article presents reviews the role of IT in achieving the principles of Lean Production. Three important topics are reviewed: the use of IT in production logistics; computer-aided production management systems; and advanced plant maintenance. It is shown that the roots of different ways of working were similar, but that subsequent developments followed in opposite directions. Later, when the acceptance of Lean Production became more pervasive, the practices typically converged into hybrid production systems, applying elements of several systems in a way that is consistent with the principles with Lean Production.

In 1977, Sugimori et al. published the first paper on the principles of the Toyota Production System that was written in English [1]. They stated that the use of computer systems for organising production logistics would introduce unnecessary cost, over-production and uncertainty. Instead, they focused upon Kanban (card) systems because of their simplicity and robustness. The Kanban was described as an information system in its own right: “It is only the final assembly line … that can accurately know the necessary timing and quantity of parts” (p. 555). As also noted by New [2], this approach made a striking contrast with that of contemporary Western companies, in which information technology and advanced automation was often seen as the way to gain competitive advantage (for example, General Motors invested $70 billion on information technology and automation [2] and [3]). Interestingly, a common misperception at that time was that information technology and advanced automation were the main success factors of Japanese production practices [4]. It is now realised that the Japanese approach was not rooted in the use of information technology [5], [6], [7] and [8]. Nevertheless information technology does have a role to play in achieving excellence in production. The aim of this article is to review that role through a thorough literature review. Herron and Braiden [9] presented a three stage maturity model that described the application of Lean Production techniques. The first stage, Gemba Kanri (Workshop Management), stabilises the manufacturing system to ensure that processes are controlled and reliable [9]. The aim of the second stage is to achieve maximum productivity through the application of just-in-time principles. During the third stage, the organisation focuses on further incremental improvement steps [9]. This paper reviews the literature relating to the use of IT in Lean Production. It takes a historical perspective and outlines the development of production control and Lean; computer-aided production management (CAPM) systems and ERPs and advanced maintenance. The review outlines Western and Japanese perspectives and shows convergence in the approaches adopted. Organisation of the paper: In Section 2, the role of IT in the design and implementation of production control systems is described. Section 3 considers the application of computer-aided production management systems and enterprise resources planning. Section 4 discusses the use of IT in organising plant maintenance. Section 5 provides a discussion and conclusions.

There is no doubt that the Kanban and similar logistics systems, which are simple, robust and strictly limit WIP are, and always have been, very successful [1]. These systems were much more successful than early automation and computerised planning and control approaches [3]. However, there have since been many successful developments in both automation and computer-aided production management. Companies that stuck to the limited choices advocated by Sugimori et al. [1] would have missed important opportunities to improve their competitiveness. This article has presented a topical review and historical overview of the developments in the use of IT and their relation to Lean Production. It has focused upon three related subject areas: the use of IT in production planning and control systems; computer-aided production management systems and enterprise resource planning; and advanced plant maintenance. It has been shown that the origins of the different approaches are similar, but that subsequent developments followed in opposite directions. Later, when the acceptance of Lean Production became more pervasive, the practices typically converged into hybrid production systems, applying elements of several systems in a way that is consistent with the principles with Lean Production. 5.1. Production planning and control systems Section 2 described the developments in the USA, Europe and Japan which were shown to be different, which has had an important impact on the organisation of production and production control in these parts of the world. Together with a historical overview and review of production planning and control systems, the development of ‘pull’ control systems for make-to-order production environments was discussed in detail. Kanban, ConWIP, and Polca ‘pull’ systems were discussed and compared. The review concludes that the developments in ‘pull’ system design focuses upon adapting well-known ‘pull’ mechanisms to different situations. The differences between the three systems relate to the characteristics of different production environments. The developments also place new demands on the type of IT support needed to implement these systems successfully in practice. 5.1.1. Computer-aided production management In terms of modern computer-aided production management, the functionality of MPS, MRP, CRP, Inventory control, shop floor control and vendor measurement were discussed. In a brief historical overview, protectionist government policy did not help in stimulating efficient practice or encouraging low levels of inventory. The use of ERP, despite its high implementation costs has become widespread. In recent years (and unlike before), companies appeared to no longer make principle and company-wide choices between ‘push’ and ‘pull’, but are building hybrid environments, taking advantage of aspects of both systems were possible, facilitated by the developments in IT. 5.1.2. Advanced maintenance processes Section 4 described the development of the maintenance function, partially aided by the developments in IT. Four important approaches were discussed; TPM, RCM, RBM and CBM. The literature describes applications of these approaches in industry. It appears that TPM overlaps with the principles of Lean Production. Other approaches, in particular CBM, show the ability to support Lean principles, since it allows prevention of disturbances and support reliable operations of production equipment. The most common IT application found in industry is the MMIS which is comparable to ERP (but specifically aimed at supporting Maintenance). RCM and RBM are focussed approaches of which evidence of (varying degree of) adoption by industry is available. However, a gap was identified between significant efforts in advanced maintenance modelling papers and limited application in practice. Identifying causes for the apparently limited use of a wealth of quantitative models and tools in practice, and possibly finding solutions for these causes, may be an important suggestion for further work. 5.1.3. Suggested research directions Based on the observations made in this review, the authors would suggest the following topics for further research: • The recent development of hybrid production environments, as described in Section 3, appears to have received limited attention in the academic literature so far. Typically, researchers tend to select one particular topic for in-depth study. The hybrids are broad in their scope. Their development and use appears to be an important development in practice and requires attention. • Opportunities were identified for the further development of specific ‘pull’ applications such as Polca that can be facilitated by IT. • The combination of Lean Production with computerised methods provides an effective way to manage the supply chain. Research in Lean Production and its relationship with information technology should adopt a supply chain perspective. • There appears to be significant opportunities for the use of CBM in various situations. The literature has shown that the CBM principles can be used in practical situations, but its usage does not appear to be commonplace as yet. This means that for many specific situations/requirements, the development of specific CBM solutions needs further work. • In the literature on maintenance (e.g. RBM), a gap was identified between significant modelling efforts and limited application in practice. Effort is required in translating the theoretical progress into actual practical use.