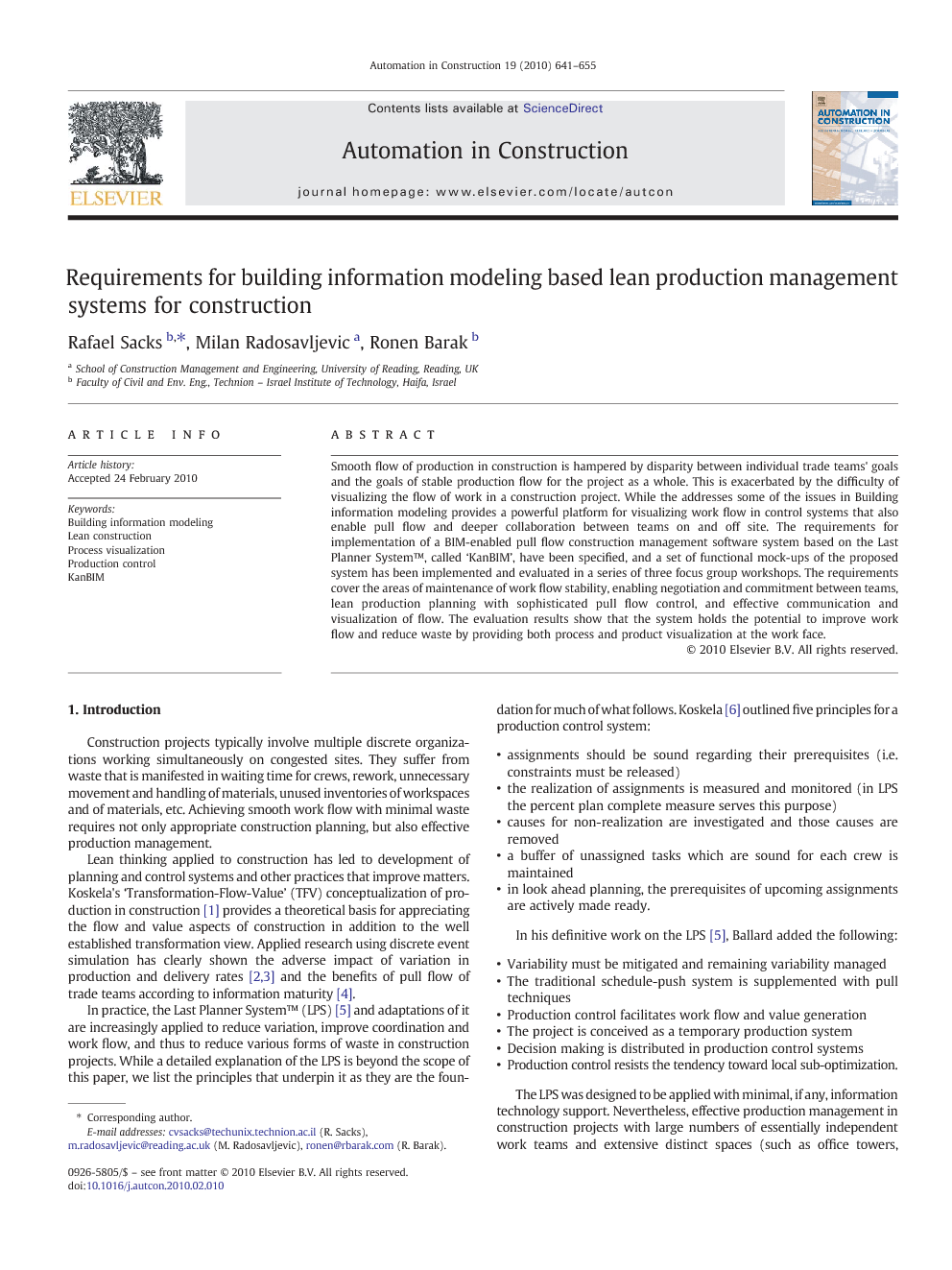 Smooth flow of production in construction is hampered by disparity between individual trade teams' goals and the goals of stable production flow for the project as a whole. This is exacerbated by the difficulty of visualizing the flow of work in a construction project. While the addresses some of the issues in Building information modeling provides a powerful platform for visualizing work flow in control systems that also enable pull flow and deeper collaboration between teams on and off site. The requirements for implementation of a BIM-enabled pull flow construction management software system based on the Last Planner System™, called ‘KanBIM’, have been specified, and a set of functional mock-ups of the proposed system has been implemented and evaluated in a series of three focus group workshops. The requirements cover the areas of maintenance of work flow stability, enabling negotiation and commitment between teams, lean production planning with sophisticated pull flow control, and effective communication and visualization of flow. The evaluation results show that the system holds the potential to improve work flow and reduce waste by providing both process and product visualization at the work face.

A set of guiding requirements for implementation and operation of a BIM-based lean production management system for construction has been compiled through development of the KanBIM concept. The requirements were derived through research in which a system was specified, prototype interfaces were implemented and tested using a touch-screen unit for site communications, and in which the approach was evaluated with construction companies. The key requirements concern issues of visualization of the construction process and its status; visualization of the construction product and work methods; support for planning, negotiation, commitment and status feedback; implementation of pull flow control; maintenance of work flow and plan stability; and formalizing production experiments for continuous process improvement. The requirements emphasize the role of a KanBIM system in supporting human decision making, negotiation among trade teams to coordinate weekly work plans, reduction of the granularity of planning to a daily level, real-time evaluation of task constraints to compute task maturity, and implementation of the language/action perspective. The primary contribution of the KanBIM concept is that it provides visualization not only of the construction product, but of the production process. It extends the LPS by providing the information infrastructure to reduce the granularity of planning coordination from weekly to daily. It enables negotiation between parties affected by changes and informs – and thus empowers – all others on and off site of any changes agreed to the plan in real-time. As such, it can contribute to relieving the need for construction managers to ‘fight fires’ and enable them to focus on establishing the production systems, setting policy and continuous improvement. If used with the priority pull flow index, it will also extend the LPS's ability to stabilize plans by enabling implementation of a CONWIP production system. The qualitative feedback resulting from the discussions and questionnaires used in the three workshops indicates that practitioners were generally supportive of the system and its aim to improve management in construction but they agreed that the system requires careful addressing of potential problems. According to the received feedback site conditions, security and human behavior are among the most serious problems that could affect the implementation of the system. Project team integration by means of sub-contractors’ involvement in the detailed planning process and the need to better visualize production/process information were all found to be highly significant for the successful production management. However, adequate testing on site in order to establish to what extent technical difficulties can impact upon the usefulness of the system and behavioral investigation of its use have been identified as prerogative before the system could see the full scale application in the industry. This paper has outlined the concept and defined the requirements and presented a system design for a BIM-enabled lean production management system for construction. Evaluation to date has identified the value of the system concept, but also shortcomings in the interface designs. Clearly, further research is needed before a full scale KanBIM system can be built. Future work will include testing of the algorithms for calculation of work package and task maturity, development of the pull flow index and its computation, experimentation to explore the feasibility for guiding teams’ progress through projects using the touch-screen or other interfaces, and the information technology challenges of maintaining an updated construction process model within a construction BIM tool.