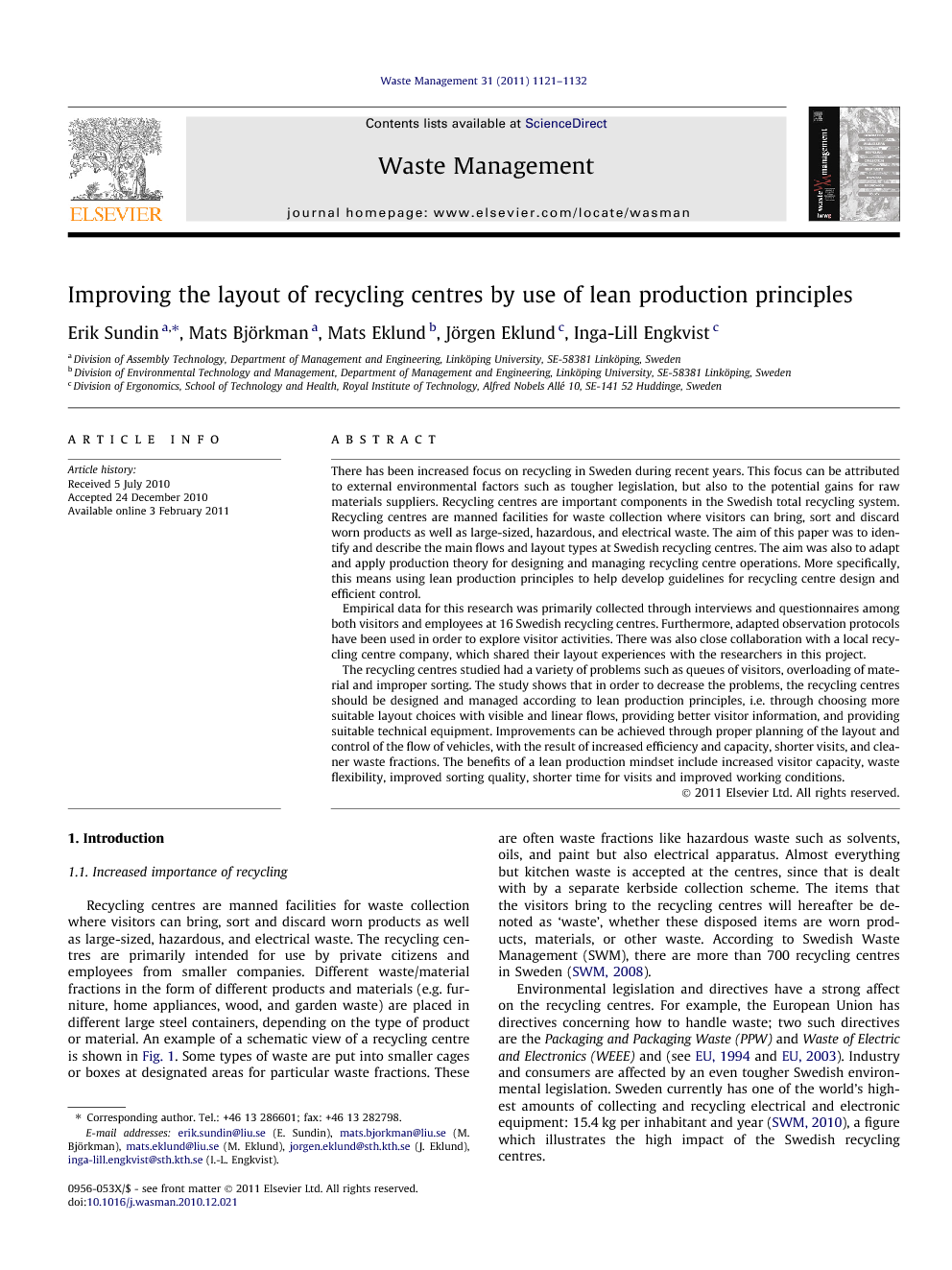 There has been increased focus on recycling in Sweden during recent years. This focus can be attributed to external environmental factors such as tougher legislation, but also to the potential gains for raw materials suppliers. Recycling centres are important components in the Swedish total recycling system. Recycling centres are manned facilities for waste collection where visitors can bring, sort and discard worn products as well as large-sized, hazardous, and electrical waste. The aim of this paper was to identify and describe the main flows and layout types at Swedish recycling centres. The aim was also to adapt and apply production theory for designing and managing recycling centre operations. More specifically, this means using lean production principles to help develop guidelines for recycling centre design and efficient control. Empirical data for this research was primarily collected through interviews and questionnaires among both visitors and employees at 16 Swedish recycling centres. Furthermore, adapted observation protocols have been used in order to explore visitor activities. There was also close collaboration with a local recycling centre company, which shared their layout experiences with the researchers in this project. The recycling centres studied had a variety of problems such as queues of visitors, overloading of material and improper sorting. The study shows that in order to decrease the problems, the recycling centres should be designed and managed according to lean production principles, i.e. through choosing more suitable layout choices with visible and linear flows, providing better visitor information, and providing suitable technical equipment. Improvements can be achieved through proper planning of the layout and control of the flow of vehicles, with the result of increased efficiency and capacity, shorter visits, and cleaner waste fractions. The benefits of a lean production mindset include increased visitor capacity, waste flexibility, improved sorting quality, shorter time for visits and improved working conditions.

The design of recycling centres can be improved by considering vehicle flows and visitor activities. By applying lean production principles on recycling centre operations, existing flow problems can be decreased. For example, the recycling centres need to be managed in a better way by choosing a suitable layout, signs, and opening hours. Considering a lean production engineering mind-set on recycling centres, several improvements can be achieved, e.g. shorter visiting times and cleaner waste fractions. Queues, peak flows, bottlenecks, capacity, flexibility, lead time, and efficiency can be influenced through some lean production-based guidelines concerning the design of the recycling centres. Firstly, many containers should be positioned within short walking distances from the parked vehicle; unnecessary long and time-consuming transportation is considered as ‘waste’ in lean production. Also, the area should not have crossing traffic, and the centre design should allow a second turn around the large container area in order to avoid reversing vehicles, as visible and linear lows are cornerstones in lean production. Further, there should be a spacious area of large containers, and the layout should be intuitive in that sense that is easy for the visitors to understand where they should drive their cars. In an ideal layout, it should it be obvious for the visitor where to drive and where to stop their cars. This is important in order to avoid queues and bottlenecks. A problem is to achieve this at the same time as the layout is adapted to the topography, the terrain and the economic constraints. Space for a large number of vehicles at the same time creates a smooth flow of traffic, which is advantageous both for the visitors and the employees. Waste fractions that have seasonal peaks (e.g. garden waste) should be placed separately from the other waste fractions in order to avoid seasonal overloading and queues. Another way to limit overloading is to increase opening hours. If the opening hours are prolonged during evenings and weekends, there would be more time available for visitors to choose when planning to go to the recycling centre. Several adjacent recycling centres may have opening hours that complement one another.