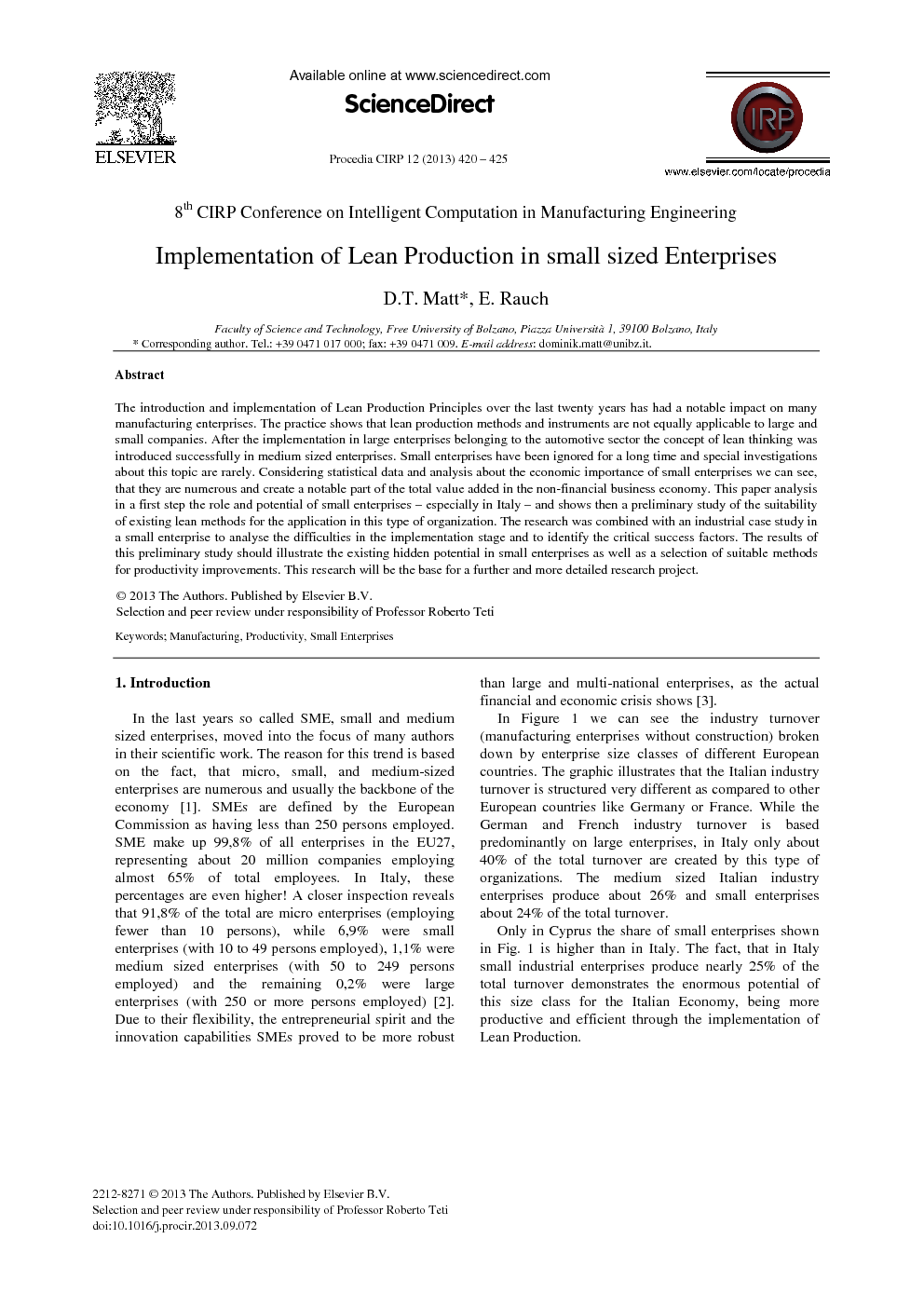 The introduction and implementation of Lean Production Principles over the last twenty years has had a notable impact on many manufacturing enterprises. The practice shows that lean production methods and instruments are not equally applicable to large and small companies. After the implementation in large enterprises belonging to the automotive sector the concept of lean thinking was introduced successfully in medium sized enterprises. Small enterprises have been ignored for a long time and special investigations about this topic are rarely. Considering statistical data and analysis about the economic importance of small enterprises we can see, that they are numerous and create a notable part of the total value added in the non-financial business economy. This paper analysis in a first step the role and potential of small enterprises – especially in Italy – and shows then a preliminary study of the suitability of existing lean methods for the application in this type of organization. The research was combined with an industrial case study in a small enterprise to analyse the difficulties in the implementation stage and to identify the critical success factors. The results of this preliminary study should illustrate the existing hidden potential in small enterprises as well as a selection of suitable methods for productivity improvements. This research will be the base for a further and more detailed research project.

In the last years so called SME, small and medium sized enterprises, moved into the focus of many authors in their scientific work. The reason for this trend is based on the fact, that micro, small, and medium-sized enterprises are numerous and usually the backbone of the economy [1]. SMEs are defined by the European Commission as having less than 250 persons employed.SME make up 99,8% of all enterprises in the EU27,representing about 20 million companies employing almost 65% of total employees. In Italy, these percentages are even higher! A closer inspection reveals that 91,8% of the total are micro enterprises (employing fewer than 10 persons), while 6,9% were small enterprises (with 10 to 49 persons employed), 1,1% were medium sized enterprises (with 50 to 249 persons employed) and the remaining 0,2% were large enterprises (with 250 or more persons employed) [2]. Due to their flexibility, the entrepreneurial spirit and the innovation capabilities SMEs proved to be more robust than large and multi-national enterprises, as the actual financial and economic crisis shows [3].In Figure 1 we can see the industry turnover(manufacturing enterprises without construction) broken down by enterprise size classes of different European countries. The graphic illustrates that the Italian industry turnover is structured very different as compared to other European countries like Germany or France. While the German and French industry turnover is based predominantly on large enterprises, in Italy only about 40% of the total turnover are created by this type of organizations. The medium sized Italian industry enterprises produce about 26% and small enterprises about 24% of the total turnover. Only in Cyprus the share of small enterprises shown in Fig. 1 is higher than in Italy. The fact, that in Italy small industrial enterprises produce nearly 25% of the total turnover demonstrates the enormous potential of this size class for the Italian Economy, being more productive and efficient through the implementation of Lean Production.Knowing the potential in the introduction of Lean Principles, we have to think about how to realize it in every single production unit. To quantify the number of small enterprises we analysed the structure of the Italian Industry (see Fig. 2). We can observe, that in Italy exist a lot of micro enterprises with up to 9 employees (81,34%), only 2,12% medium sized and 0,30% large sized enterprises. About 75.000 enterprises fall in the category of small sized organizations (16,24% of all enterprises).Therefore special research and investigations are needed to create simple and practically guidelines for the implementation of Lean Production in this size class of enterprises as well as we need the work of universities, the local chambers of industry and commerce and the responsible associations to put it into practice through Know-how transfer and training.

In the introduction of this paper was illustrated how important are small enterprises for the whole economy.They are not only numerous (16% of all enterprises in Italy) but create also about 25% of the total Italian sales volume in the industry. The literature shows, that most of the medium and large companies have introduced productivity improvement programs. In the actual situation, the interviews in several small enterprises showed, that small companies hesitate to make the same move, because they fear the needed resources in form of personnel, time and capital as well as the lack of Knowhow. The case study in this paper showed in form of an action research in a small company with 25 employees,that the introduction of Lean Production methods is not only possible, it brought also improvements and advantages for the described company. We have seen also that a lot of business owners expect from local and national associations and chambers initiatives to enhance the Know-how Transfer. Based on the results of this preliminary study will be started in 2012 a research project with the chamber of crafts to analyse and prove in a more detailed study the suitability of productivity improvements methods in small enterprises.