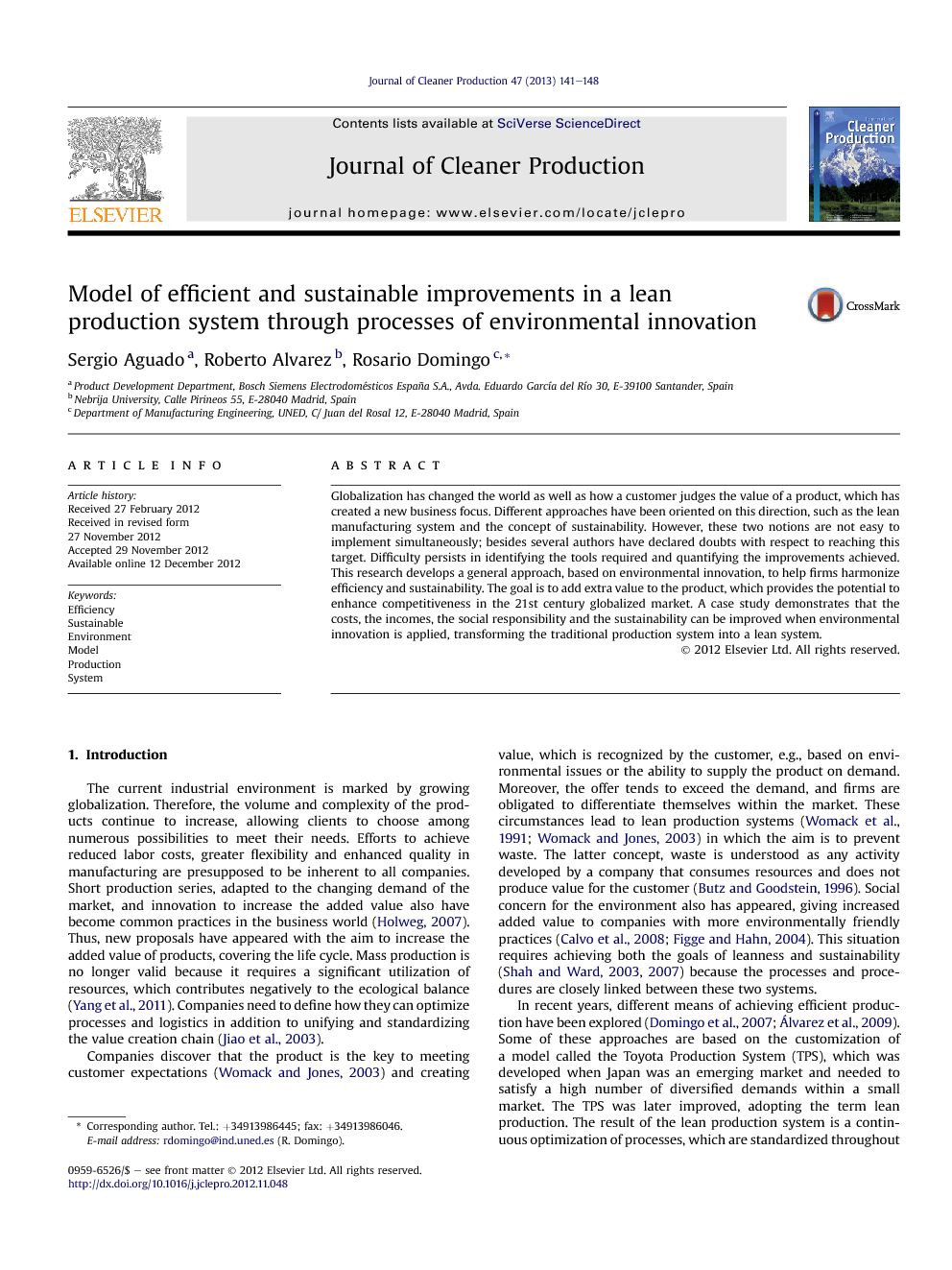 Globalization has changed the world as well as how a customer judges the value of a product, which has created a new business focus. Different approaches have been oriented on this direction, such as the lean manufacturing system and the concept of sustainability. However, these two notions are not easy to implement simultaneously; besides several authors have declared doubts with respect to reaching this target. Difficulty persists in identifying the tools required and quantifying the improvements achieved. This research develops a general approach, based on environmental innovation, to help firms harmonize efficiency and sustainability. The goal is to add extra value to the product, which provides the potential to enhance competitiveness in the 21st century globalized market. A case study demonstrates that the costs, the incomes, the social responsibility and the sustainability can be improved when environmental innovation is applied, transforming the traditional production system into a lean system.

The current industrial environment is marked by growing globalization. Therefore, the volume and complexity of the products continue to increase, allowing clients to choose among numerous possibilities to meet their needs. Efforts to achieve reduced labor costs, greater flexibility and enhanced quality in manufacturing are presupposed to be inherent to all companies. Short production series, adapted to the changing demand of the market, and innovation to increase the added value also have become common practices in the business world (Holweg, 2007). Thus, new proposals have appeared with the aim to increase the added value of products, covering the life cycle. Mass production is no longer valid because it requires a significant utilization of resources, which contributes negatively to the ecological balance (Yang et al., 2011). Companies need to define how they can optimize processes and logistics in addition to unifying and standardizing the value creation chain (Jiao et al., 2003). Companies discover that the product is the key to meeting customer expectations (Womack and Jones, 2003) and creating value, which is recognized by the customer, e.g., based on environmental issues or the ability to supply the product on demand. Moreover, the offer tends to exceed the demand, and firms are obligated to differentiate themselves within the market. These circumstances lead to lean production systems (Womack et al., 1991; Womack and Jones, 2003) in which the aim is to prevent waste. The latter concept, waste is understood as any activity developed by a company that consumes resources and does not produce value for the customer (Butz and Goodstein, 1996). Social concern for the environment also has appeared, giving increased added value to companies with more environmentally friendly practices (Calvo et al., 2008; Figge and Hahn, 2004). This situation requires achieving both the goals of leanness and sustainability (Shah and Ward, 2003, 2007) because the processes and procedures are closely linked between these two systems. In recent years, different means of achieving efficient production have been explored (Domingo et al., 2007; Álvarez et al., 2009). Some of these approaches are based on the customization of a model called the Toyota Production System (TPS), which was developed when Japan was an emerging market and needed to satisfy a high number of diversified demands within a small market. The TPS was later improved, adopting the term lean production. The result of the lean production system is a continuous optimization of processes, which are standardized throughout all areas within the firm. Based on this approach, the customer requirements are satisfied in terms of cost, quality and delivery times, and therefore, the competitiveness of the company increases. In fact, Toyota has continuously improved its competitive position to become a benchmark for other manufacturers (Domingo et al., 2007) by adapting its system to the changing market. Other initiatives have been described to achieve a sustainable development process (Veleva and Ellenbecker, 2001; Ahmed, 2011), particularly one capable of meeting the current needs without compromising the ability of future generations (Sundkvist and Finnveden, 2007). The main difficulty in this process is associated with the quantification of added value (Jiao et al., 2003), which is obtained by the final product. Therefore, it is essential to identify the existing variables (Sleeswijk et al., 2008) in accordance with the methodology of the life cycle analysis, which includes both economic and social criteria (Benedetto and Klemes, 2009). In relation to these economic and social criteria, businesses must identify the environmental aspects, which are understood as the elements of the activities, products or services in an organization capable of interacting with the environment (ISO 14001, 2004). These aspects are difficult to measure and belong to different areas that are not verifiable; hence, a translation into comparable factors, called the environmental impact, is essential. Some authors have analyzed this translation, as Noteboom (2007), and a wide range of applications exists to quantify them. Several examples include Ecotax (Finnveden et al., 2006), the EPS (Steen, 1999), the Ecovalue08 (Ahlroth and Finnveden, 2011) and the Eco-indicator 99 – EI99 – (Goedkoop and Spriensma, 1999). The EI99 is the result of a prioritization process that considers the negative environmental impacts that most affect the region. The fossil Cumulative Energy Demand (CED) also could be used for environmental performance as an alternative to performing a full Life Cycle Assessment (LCA) (Huijbregts et al., 2006); this approach is based on the relationship between the use of fossil fuels and several environmental impacts. This research primarily uses EI99 and CED to ratify the quality of the results, but any of the alternatives identified above could be used by businesses to help in their decision-making. Intuitive applications have been developed to facilitate the use of Eco-indicators (Shu et al., 1996), but these applications are still generic and difficult to use in detailed processes. The following subjects are suggested based on the social burden to the environment, and they are supported by an Integrated Product Policy (Sundkvist and Finnveden, 2007). Policy is the function of the public authorities utilized to ensure sustainable development, using relevant, voluntary or mandatory legislation. The product should be considered because all products and services are covered and finally, the product policy is integrated because it includes the life cycle of the products. These activities demonstrate the interest of society, companies and public administration toward achieving sustainable development (Porter and Linde, 1995a, 1995b). An economic interest (Benedetto and Klemes, 2009), embodied in the policies that encourage companies to become involved, also exists. The common point is the relevance of the final product's value. Butz and Goodstein (1996) define the value concept for the customer, and according to these authors, it is the customer who decides when the product has value. The final product value is equal to the emotional union that is established between the consumer and the producer. As a result, the consumer is oriented to buy repeatedly, or even exclusively, from this provider and to recommend the provider. This relationship leads to the creation of a new model, developed in this research. It consists of identifying and quantifying the efficient and sustainable improvements through processes of environmental innovation by waste elimination.