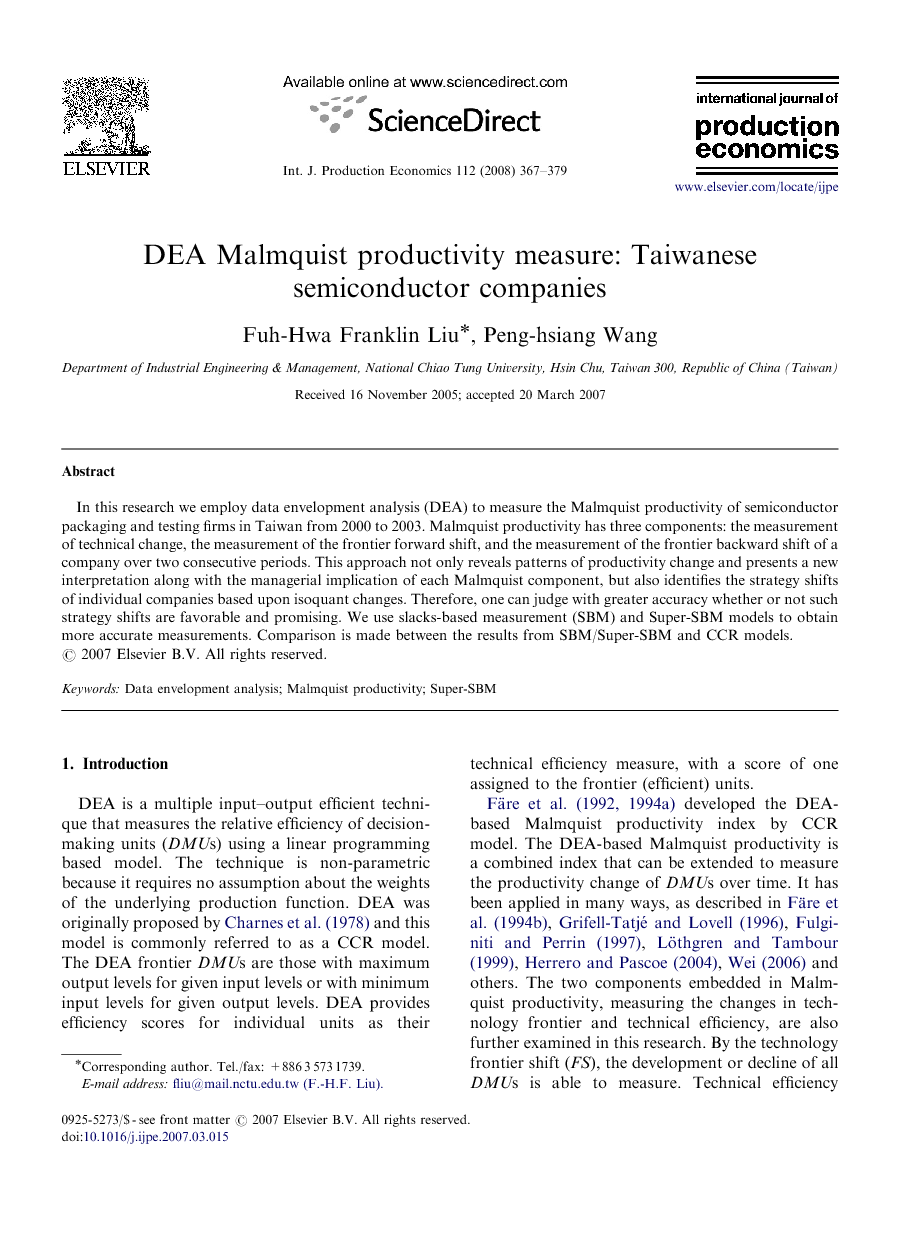 In this research we employ data envelopment analysis (DEA) to measure the Malmquist productivity of semiconductor packaging and testing firms in Taiwan from 2000 to 2003. Malmquist productivity has three components: the measurement of technical change, the measurement of the frontier forward shift, and the measurement of the frontier backward shift of a company over two consecutive periods. This approach not only reveals patterns of productivity change and presents a new interpretation along with the managerial implication of each Malmquist component, but also identifies the strategy shifts of individual companies based upon isoquant changes. Therefore, one can judge with greater accuracy whether or not such strategy shifts are favorable and promising. We use slacks-based measurement (SBM) and Super-SBM models to obtain more accurate measurements. Comparison is made between the results from SBM/Super-SBM and CCR models.

DEA is a multiple input–output efficient technique that measures the relative efficiency of decision-making units (DMUs) using a linear programming based model. The technique is non-parametric because it requires no assumption about the weights of the underlying production function. DEA was originally proposed by Charnes et al. (1978) and this model is commonly referred to as a CCR model. The DEA frontier DMUs are those with maximum output levels for given input levels or with minimum input levels for given output levels. DEA provides efficiency scores for individual units as their technical efficiency measure, with a score of one assigned to the frontier (efficient) units. Färe et al., 1992 and Färe et al., 1994a developed the DEA-based Malmquist productivity index by CCR model. The DEA-based Malmquist productivity is a combined index that can be extended to measure the productivity change of DMUs over time. It has been applied in many ways, as described in Färe et al. (1994b), Grifell-Tatjé and Lovell (1996), Fulginiti and Perrin (1997), Löthgren and Tambour (1999), Herrero and Pascoe (2004), Wei (2006) and others. The two components embedded in Malmquist productivity, measuring the changes in technology frontier and technical efficiency, are also further examined in this research. By the technology frontier shift (FS), the development or decline of all DMUs is able to measure. Technical efficiency change (TEC) is used to measure the change in technical efficiency. It is also a measure of how much closer to the frontier the company (DMU) is when crossing the two consecutive times. We define TEC and Malmquist productivity as R3 and R4, respectively, in Section 4.1 for the performance measurement. Chen and Ali (2004) applied the DEA Malmquist productivity measure to the computer industries by the CCR model to assess the four distance functions of Malmquist productivity. Moreover, they discovered more information about the two components that obscure in the Malmquist productivity index. We define them as R1 and R2 in Section 3 for the performance measurement in this research and account for the attributes. Their approach not only reveals patterns of productivity change and presents a new interpretation along with the managerial implication of each component, but also identifies the strategy shifts of individual DMUs in a particular time period. They determined whether such strategy shifts were favorable and improving. However, the ratio efficiency θ0* by the CCR model is not able to take account of slacks. For instance, the optimal solution θ0*=1 might be with positive slacks. In the DEA Malmquist productivity, the DMU0 is regarded as efficient but actually, it should be regarded as inefficient. Therefore, it is important to observe both the ratio efficiency and the slacks. Some attempts have been made to unify θ0* and slacks into a scalar measure. Charnes et al. (1985) developed the additive model of DEA, which deals directly with input excess and output shortfalls. But this model has no scalar measure (ratio efficiency) per se. Thus, although this model can discriminate between efficient and inefficient DMUs by the existence of slacks, it has no means of gauging the depth of inefficiency, similar to θ0* in the CCR model. Tone (2001) developed a slacks-based measure (SBM) of efficiency in DEA, which takes account of scalar measure and slacks. Further, Tone (2002) developed a SBM of super efficiency (Super-SBM) in DEA for discriminating between efficient DMUs. Super efficiency measures the degree of superiority that efficient DMU0 possesses against other DMUs. To extend the investigation on influence from slacks to Malmquist productivity index, Chen (2003) proposed a non-radial Malmquist productivity index, which is able to eliminate possible inefficiency represented by the non-zero slacks to measure the productivity change of three Chinese major industries. Instead, we employ the SBM and Super-SBM models in this research. In addition to TEC (R3) and Malmquist productivity (R4) which existed in the traditional Malmquist productivity measurement, we also investigate the two components—R1 and R2 proposed by Chen and Ali (2004) to interpret a more detailed management implication. The next section reviews how the DEA-based Malmquist productivity index works. We also present the Malmquist productivity approach.

We benefited from use of the DEA Malmquist productivity approach employed by Chen and Ali (2004) to discover that in-depth information could be obtained by analyzing each individual component of the Malmquist productivity index. However, the result is more precise using the slacks-based measures. In fact, among these 15 firms in Taiwan, atop firms may have huge influence on their own country, or even, global market. Therefore, the current approach that involves the super efficiency on Malmquist productivity measure is more helpful to analysts who are highly curious about atop firms having DEA efficient performances. According to the comparison with CCR, there are number of differences at the end. Such analyses not only help revise the weak points in the CCR model but also match the reality of Taiwan semiconductor companies. Moreover, it is sometimes very critical to capture a firm's performance through an analysis of the components of the Malmquist productivity index to reveal the managerial implications of each component and limit misleading information. As a result, a firm will be aware of what kind of weaknesses they should watch out for and remedy. Furthermore, in terms of industrial management, this method allows judgments to be made concerning whether or not the strategic shift is favorable and promising.