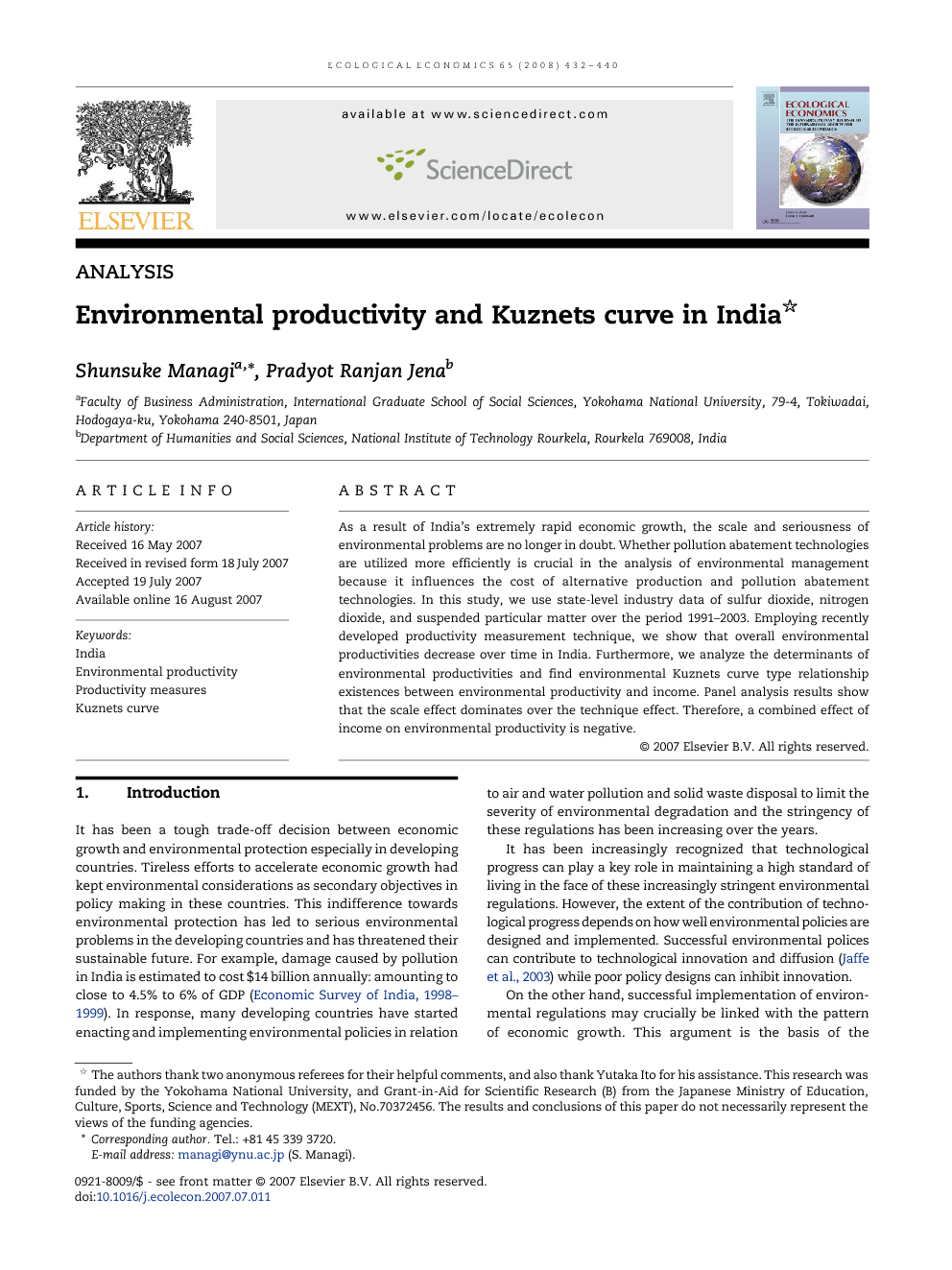 It has been a tough trade-off decision between economic growth and environmental protection especially in developing countries. Tireless efforts to accelerate economic growth had kept environmental considerations as secondary objectives in policy making in these countries. This indifference towards environmental protection has led to serious environmental problems in the developing countries and has threatened their sustainable future. For example, damage caused by pollution in India is estimated to cost $14 billion annually: amounting to close to 4.5% to 6% of GDP (Economic Survey of India, 1998–1999). In response, many developing countries have started enacting and implementing environmental policies in relation to air and water pollution and solid waste disposal to limit the severity of environmental degradation and the stringency of these regulations has been increasing over the years. It has been increasingly recognized that technological progress can play a key role in maintaining a high standard of living in the face of these increasingly stringent environmental regulations. However, the extent of the contribution of technological progress depends on how well environmental policies are designed and implemented. Successful environmental polices can contribute to technological innovation and diffusion (Jaffe et al., 2003) while poor policy designs can inhibit innovation. On the other hand, successful implementation of environmental regulations may crucially be linked with the pattern of economic growth. This argument is the basis of the environmental Kuznets curve (EKC) hypothesis, which has gained tremendous popularity among the researchers over the past decade. EKC draws its roots from the pioneering study by Grossman and Krueger (1993), which established the empirical relationship between measures of environmental quality and national income. An inverted U-shaped relationship of the EKC imply that environmental degradation increases with income at low levels of income and then decreases once a threshold level of per capita income is reached. After the study by Grossman and Krueger (1993), many studies such as Seldon and Song (1994) and Holtz-Eakin and Selden (1995) had investigated this relationship for alternative measures of environmental degradation with levels of pollutants or pollutant intensities (see Dinda (2004), Stern (2004), and Managi (2006) for recent literature). There are studies that supported the EKC relationship between pollution and per capita national income. Their argument for such finding was that after a certain level of income, concern for environmental degradation becomes more relevant and a mechanism to reduce environmental degradation is put in place through necessary institutional, legal and technological adjustments. However, a major criticism against these studies is that they have adopted a reduced form approach to examine the relationship between per capita income and pollution emissions (Stern, 1998). These two variables are merely the outcomes of a production process but they do not explain the underlying production process, which converts inputs into outputs and pollutants. In fact, the transformation of this production process may lead to environmental improvement at a higher level of income (Zaim and Taskin, 2000). Therefore, studies that examine the transformation of production process by quantifying the opportunity cost of adopting alternative environmentally superior technologies are more relevant to our study. The more efficient utilization of pollution abatement technologies, at least in part, influences the cost of alternative production and pollution abatement technologies (e.g., Jaffe et al., 2003). An extensive body of theoretical literature examines the role of environmental policy in encouraging (or discouraging) productivity growth. On the one hand, abatement pressures may stimulate innovative responses that reduce the actual cost of compliance below those originally estimated. On the other hand, firms may be reluctant to innovate if they believe regulators will respond by ‘ratcheting-up’ standards even further. Therefore, in addition to the changes in environmental regulations and technology, management levels also affect environmental performance level or environmental productivity, which explains how efficiently pollutions are treated, defined by Managi et al. (2005). Thus, whether environmental productivity increases over time is an empirical question.1 Against this backdrop, the objective of this paper is two-fold; First, attempts are made to measure technological/productivity change for environmental (non-market) outputs of data of sulfur dioxide (SO2), nitrogen dioxide (NO2), and suspended particular matter (SPM) in India using state-level industry data over the period 1991–2003; second, the change in environmental productivity in different states are linked with their respective per capita income to find an EKC type relationship. We intend to measure environmental productivity following the traditional productivity literature.2 The regulations requiring more stringent pollution abatement do not necessarily change environmental productivity since the linear expansion of pollution abatement costs and pollution reduction does not necessarily change the pollution reduction per abatement cost. The paper is structured as follows. Section 2 briefly reviews the environmental policies in India. The empirical model and data are explained in Section 3 while the results are presented in Section 4. The concluding remarks and further discussions are provided in Section 5.