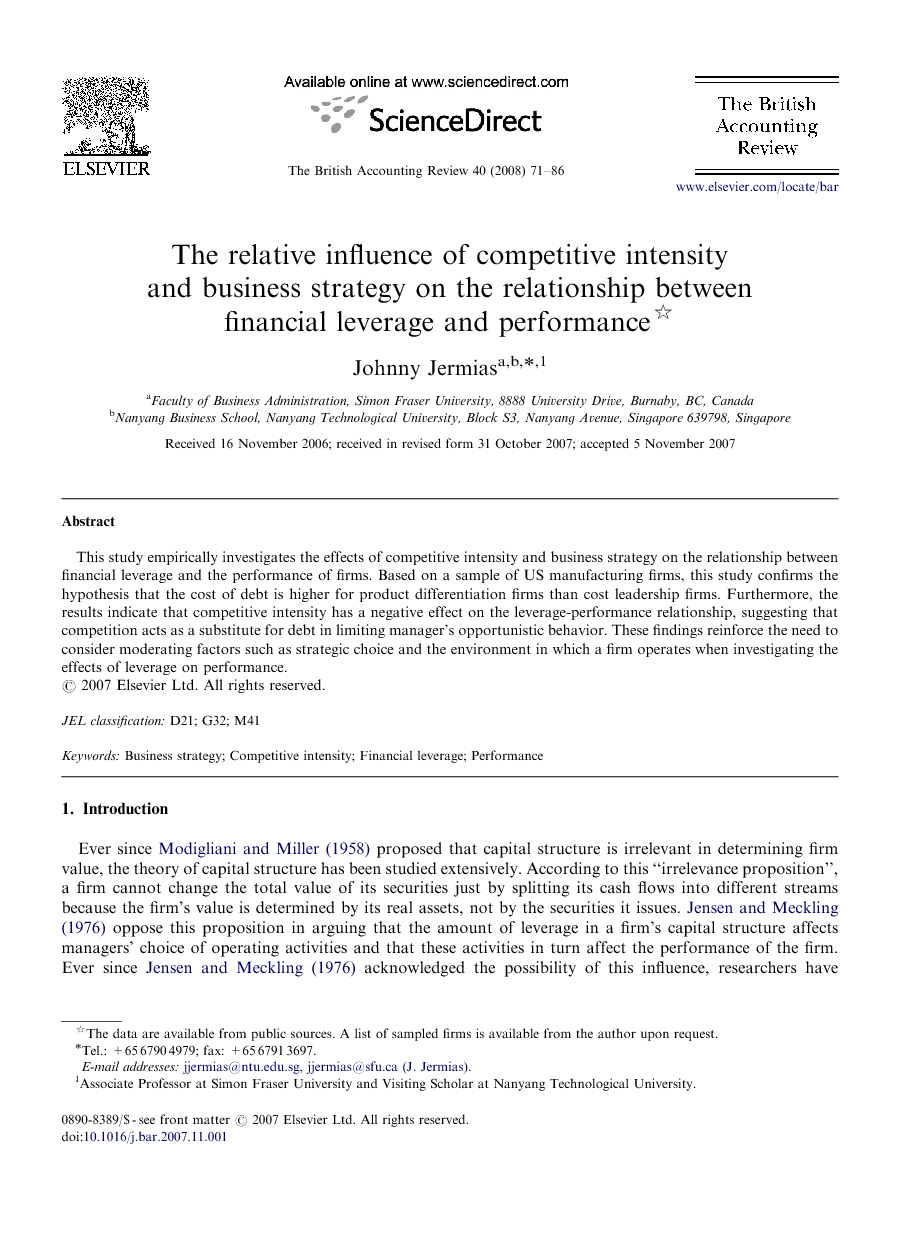 This study empirically investigates the effects of competitive intensity and business strategy on the relationship between financial leverage and the performance of firms. Based on a sample of US manufacturing firms, this study confirms the hypothesis that the cost of debt is higher for product differentiation firms than cost leadership firms. Furthermore, the results indicate that competitive intensity has a negative effect on the leverage-performance relationship, suggesting that competition acts as a substitute for debt in limiting manager's opportunistic behavior. These findings reinforce the need to consider moderating factors such as strategic choice and the environment in which a firm operates when investigating the effects of leverage on performance.

Ever since Modigliani and Miller (1958) proposed that capital structure is irrelevant in determining firm value, the theory of capital structure has been studied extensively. According to this “irrelevance proposition”, a firm cannot change the total value of its securities just by splitting its cash flows into different streams because the firm's value is determined by its real assets, not by the securities it issues. Jensen and Meckling (1976) oppose this proposition in arguing that the amount of leverage in a firm's capital structure affects managers’ choice of operating activities and that these activities in turn affect the performance of the firm. Ever since Jensen and Meckling (1976) acknowledged the possibility of this influence, researchers have conducted numerous studies that aim to explain the relationship between financial leverage and the performance of firms. Nevertheless, previous studies that tried to solve the leverage–performance puzzle continue to report mixed and often contradictory findings (Ghosh, 1992; Harris and Raviv, 1991). Some researchers (e.g., O’Brien, 2003; Robinson and Mcdougall, 2001; Barton and Gordon, 1987) argue that the conflicting evidence reported by prior studies may be due in part to the approaches used. Most prior studies have examined only the direct effects of financial leverage on performance. However, O’Brien (2003) argues that the effect of financial leverage on performance may be contingent upon competitive intensity and the strategy pursued by the firm and researchers note the need for studies that examine the influence of these variables. This is the challenge that is explored by the study presented in this paper. The purpose of this study is to investigate the effects of competitive intensity and business strategy on the relationship between financial leverage and firm performance. Building on agency theory, I predict and find that the effect of leverage on performance is more negative for firms attempting to be differentiators than those attempting to be cost leaders. Furthermore, I hypothesize and find that competitive intensity negatively affects the leverage–performance relationship. This study contributes to the literature about the relationship between financial leverage and the performance of firms and has policy implications for practitioners. Its findings indicate that substituting one form of capital for another does affect performance, but the effects are moderated by competitive intensity and the firm's strategy. They reinforce the need to consider theoretically justified moderating variables (such as strategic choice and the environment in which a firm operates) when making financing decisions because the costs and benefits of debt depend on these variables. These findings are inconsistent with the equity theory of accounting and the irrelevance proposition made by Modigliani and Miller (1958) and instead support the notion that financing decisions, strategic choice and competitive intensity do affect the performance of firms (Harris, 1994; Jensen and Meckling, 1976). The findings also have the potential to help practitioners to realize that the tax advantages of debt financing and the ability of debt covenants to control managers’ opportunistic behavior might work against performance for firms that adopt a strategy of product differentiation. The remainder of this paper proceeds as follows. The next section reviews the related literature and presents the study's hypotheses. Section 3 describes the research method and Section 4 details the data analyses and the results of statistical tests. The final section discusses the study's major findings and limitations, as well as its implications for future research in this area.