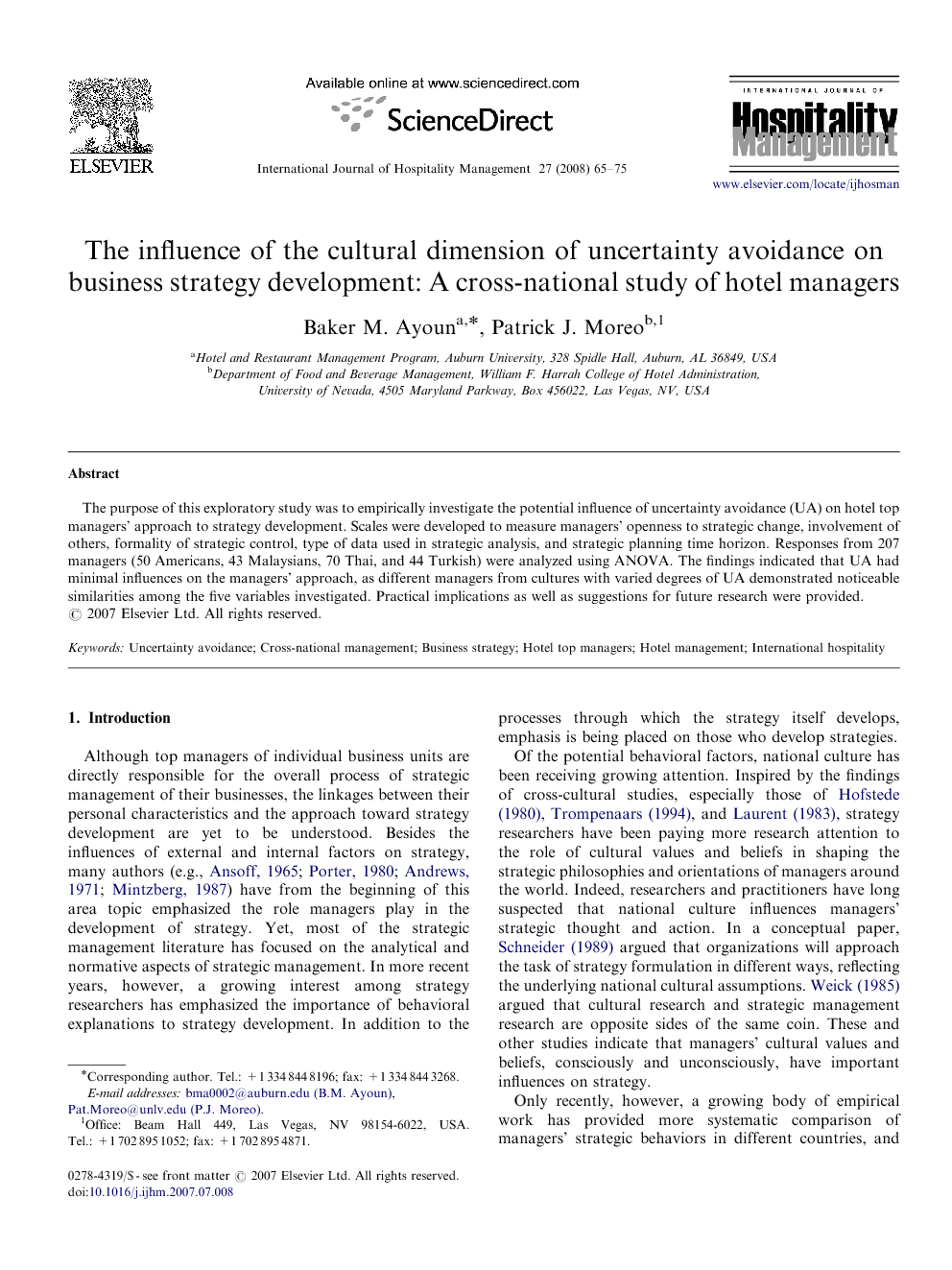 The purpose of this exploratory study was to empirically investigate the potential influence of uncertainty avoidance (UA) on hotel top managers’ approach to strategy development. Scales were developed to measure managers’ openness to strategic change, involvement of others, formality of strategic control, type of data used in strategic analysis, and strategic planning time horizon. Responses from 207 managers (50 Americans, 43 Malaysians, 70 Thai, and 44 Turkish) were analyzed using ANOVA. The findings indicated that UA had minimal influences on the managers’ approach, as different managers from cultures with varied degrees of UA demonstrated noticeable similarities among the five variables investigated. Practical implications as well as suggestions for future research were provided.

Although top managers of individual business units are directly responsible for the overall process of strategic management of their businesses, the linkages between their personal characteristics and the approach toward strategy development are yet to be understood. Besides the influences of external and internal factors on strategy, many authors (e.g., Ansoff, 1965; Porter, 1980; Andrews, 1971; Mintzberg, 1987) have from the beginning of this area topic emphasized the role managers play in the development of strategy. Yet, most of the strategic management literature has focused on the analytical and normative aspects of strategic management. In more recent years, however, a growing interest among strategy researchers has emphasized the importance of behavioral explanations to strategy development. In addition to the processes through which the strategy itself develops, emphasis is being placed on those who develop strategies. Of the potential behavioral factors, national culture has been receiving growing attention. Inspired by the findings of cross-cultural studies, especially those of Hofstede (1980), Trompenaars (1994), and Laurent (1983), strategy researchers have been paying more research attention to the role of cultural values and beliefs in shaping the strategic philosophies and orientations of managers around the world. Indeed, researchers and practitioners have long suspected that national culture influences managers’ strategic thought and action. In a conceptual paper, Schneider (1989) argued that organizations will approach the task of strategy formulation in different ways, reflecting the underlying national cultural assumptions. Weick (1985) argued that cultural research and strategic management research are opposite sides of the same coin. These and other studies indicate that managers’ cultural values and beliefs, consciously and unconsciously, have important influences on strategy. Only recently, however, a growing body of empirical work has provided more systematic comparison of managers’ strategic behaviors in different countries, and the results were inconclusive. On the one hand, several studies (e.g., Geletkanycz, 1997; Hitt et al., 1997; Kotha et al., 1995; Schneider and De Meyer, 1991) found clear differences in general perceptions and models of business strategy among managers in different countries, and the differences were attributed to the cultural heritage of the managers surveyed. By contrast, other researchers (Moussetis et al., 2005; Parnell, 2004; Harris and Ghauri, 2000; Markoczy, 2000) found mixed results for similar strategic concepts they investigated, and cultural background failed to provide consistent influences on strategic behavior. Interestingly, the cultural dimension of uncertainty avoidance was pointed out in many of these studies as the least understandable among the cultural factors. For instance, Moussetis et al. (2005) found significant differences between American and Jordanian managers with regard to the influence of several cultural characteristics (risk propensity, time orientation, openness to change, and managerial perception of control over the environment). Uncertainty avoidance was the only non-significant indicator of difference between these managers. Similarly, results revealed by Schneider and De Meyer (1991) indicated that while cultural differences were found in interpreting and responding to strategic issues by culturally diverse managers, the logic of uncertainty avoidance failed to provide convincing explanation for some of the findings. Related findings by Newman and Nollen (1996) showed that the hypotheses that work unit performance is higher when management practices are congruent with national culture were supported for four of the five cultural dimensions investigated, with the exception being the dimension of uncertainty avoidance. More research is needed to clarify the relationship between uncertainty avoidance and strategic behavior of managers, which the current study tries to achieve. Building on the existing literature, the current study empirically attempts to establish whether there is any influence of the cultural dimension of uncertainty avoidance on the approaches to business strategy development, comparing hotel managers from countries that rank differently on this cultural dimension. The dramatic changes in the contemporary landscape of the international hotel business have created conditions that offer compelling reasons for a study that explores the relationship between national culture and the development of hotel strategy that this study addresses. More of the hotel companies are engaging in networks of business relationships that there is now a record number of international strategic alliances, mergers, and acquisitions among hotel chains (Malley, 1997; Withiam, 1997), and this trend is expected to accelerate even more in the future (Hall, 1998; Malley, 1997). Different types of international partnerships between hotel companies often result in the appointment of managers from different countries to the top management team, and cultural differences are expected to create differences and conflicts in management practices that these different managers prefer, including their strategic philosophy and orientation. While there has been a fair amount of research on foreign managerial jobs and the adjustments needed by expatriate hotel managers (e.g., Kaye and Taylor, 1997; Jayawardena and Haywood, 2003; D’Annunzio-Green, 2002; Pang et al., 1998), researchers have not yet examined the relation between national culture and the strategic behavior and philosophy of hotel managers.

To sum up, it can be concluded that the cultural dimension of uncertainty avoidance had minimal influences on the approach managers might adopt toward developing their business strategies. These approaches were found to be converging, as different managers from cultures with different degrees of uncertainty avoidance demonstrated noticeable similarities in their openness to strategic change, involvement of others, data types and sources, and formality of strategy control. Of value to the current findings is the explanation provided by Newman and Nollen (1996) that uncertainty avoidance may simply be improper as a concept in countries labeled as low uncertainty avoidance, as clarity of policies and direction is a good management practice not dependent on the national culture. They also questioned its relevance to the Asian societies, citing Hofstede and Bond (1988) study of Chinese values that could not establish uncertainty avoidance as a dimension that discriminated among countries. Schneider and De Meyer (1991) questioned whether this dimension corresponds to notions of environmental analyzability as discussed in the organizational theory literature. Therefore, it is not incomprehensible that uncertainty avoidance in the current study contributed little to the understanding of differences in managers’ approach toward strategy development. The findings of this study are important not only to extend the theoretical knowledge of strategic behavior, but also because they have practical values for the hotel organizations around the world. The results suggested that international hotel organizations are well advised to give minimal consideration to the cultural dimension of uncertainty avoidance when recruiting and selecting their managers. For example, US hotel companies can hire local Thai and Turkish managers in their local hotel properties as the match between deep-rooted uncertainty avoidance cultural traits of such managers with their organizational policies could greatly improve the probability of success for both parties. The findings also suggest that the knowledge and understanding of culture will provide information to help hotel companies identify potential partners in different world regions to increase the probability of success in international business partnerships. As with any exploratory study, especially in cross-cultural management, this quantitative research presented several limitations that should be considered prior to a generalization outside its immediate scope. The study suffered from biases inherent to its methods of data collection. The accuracy of the findings of this study relied on the self-report data. While self-reporting has been shown to have some vigor (Crampton and Wagner, 1994), and has been acknowledged as an appropriate method to employ when conducting strategy research (Conant et al., 1990), there is always a danger of reporting bias and error. It would be beneficial to measure the dependent variables analyzed in this study in alternative ways. Similar results obtained by these different scales of the same variables would add validity and confidence in the current results. Additionally, uncertainty avoidance was operationalized in the study as the respondent's nationality. However, using actual measure would provide an accurate and current measure of respondents’ country status of this cultural dimension, making the comparison more meaningful. Future research would need to include other confounding variables not accounted for in this study, namely organizational culture and individual personalities. It would also be useful for future research to use sample frames and data collection methods that may result in improved response rates. Higher response rate might result in less potential for non-response bias. This can be partially realized by collaboration with local researchers in each country of interest. Such diversified research team composition would also increase the functional equivalence of research instruments.