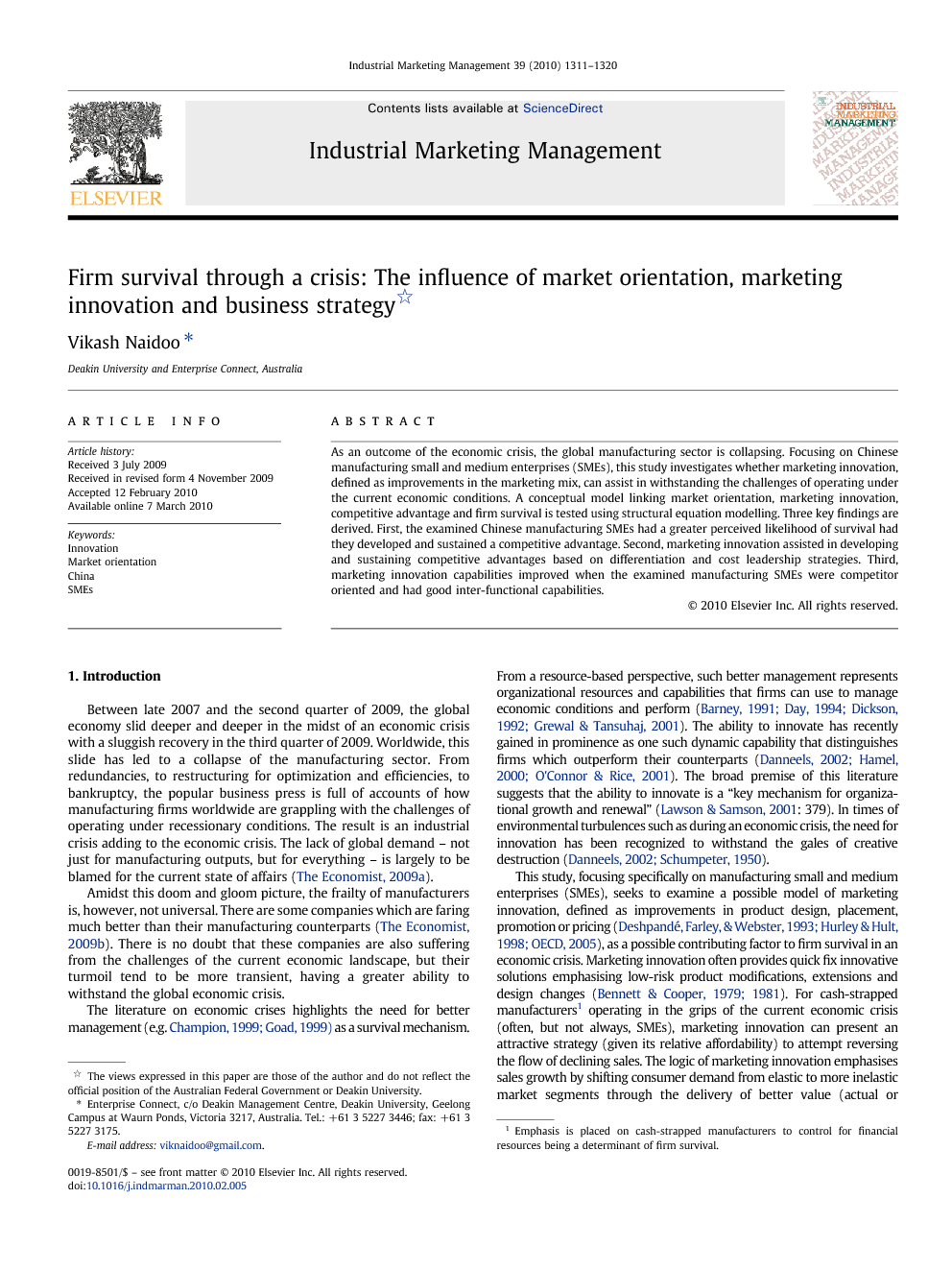 Between late 2007 and the second quarter of 2009, the global economy slid deeper and deeper in the midst of an economic crisis with a sluggish recovery in the third quarter of 2009. Worldwide, this slide has led to a collapse of the manufacturing sector. From redundancies, to restructuring for optimization and efficiencies, to bankruptcy, the popular business press is full of accounts of how manufacturing firms worldwide are grappling with the challenges of operating under recessionary conditions. The result is an industrial crisis adding to the economic crisis. The lack of global demand – not just for manufacturing outputs, but for everything – is largely to be blamed for the current state of affairs (The Economist, 2009a). Amidst this doom and gloom picture, the frailty of manufacturers is, however, not universal. There are some companies which are faring much better than their manufacturing counterparts (The Economist, 2009b). There is no doubt that these companies are also suffering from the challenges of the current economic landscape, but their turmoil tend to be more transient, having a greater ability to withstand the global economic crisis. The literature on economic crises highlights the need for better management (e.g. Champion, 1999 and Goad, 1999 as a survival mechanism. From a resource-based perspective, such better management represents organizational resources and capabilities that firms can use to manage economic conditions and perform (Barney, 1991, Day, 1994, Dickson, 1992 and Grewal and Tansuhaj, 2001). The ability to innovate has recently gained in prominence as one such dynamic capability that distinguishes firms which outperform their counterparts (Danneels, 2002, Hamel, 2000 and O'Connor and Rice, 2001). The broad premise of this literature suggests that the ability to innovate is a “key mechanism for organizational growth and renewal” (Lawson & Samson, 2001: 379). In times of environmental turbulences such as during an economic crisis, the need for innovation has been recognized to withstand the gales of creative destruction (Danneels, 2002 and Schumpeter, 1950). This study, focusing specifically on manufacturing small and medium enterprises (SMEs), seeks to examine a possible model of marketing innovation, defined as improvements in product design, placement, promotion or pricing (Deshpandé et al., 1993, Hurley and Hult, 1998 and OECD, 2005), as a possible contributing factor to firm survival in an economic crisis. Marketing innovation often provides quick fix innovative solutions emphasising low-risk product modifications, extensions and design changes (Bennett and Cooper, 1979 and Bennett and Cooper, 1981). For cash-strapped manufacturers1 operating in the grips of the current economic crisis (often, but not always, SMEs), marketing innovation can present an attractive strategy (given its relative affordability) to attempt reversing the flow of declining sales. The logic of marketing innovation emphasises sales growth by shifting consumer demand from elastic to more inelastic market segments through the delivery of better value (actual or perceived) to the consumer (Bennett and Cooper, 1979, Bennett and Cooper, 1981 and Hurley and Hult, 1998). In theory, such logic holds weight in a business environment where global demand for manufactured goods has rapidly declined and manufacturers need to hastily reinvent the demand functions of their products if they are to ensure their short to medium-term survival in the current economic landscape. Such an argument has been postulated by many business commentators in the popular business press (e.g. The Economist, 2009b). In practice, however, there is a dearth of empirical evidence which proves the influence of marketing innovation on firm survival during an economic crisis. This study attempts to bridge this gap by providing up-to-date empirical evidence. This article begins with an overview of the current literature and then develops the conceptual framework and hypotheses. A discussion of research methodology follows. Using data from 184 export-oriented Chinese SMEs, this study uses confirmatory factor analysis and structural equation modelling to test the conceptual model empirically. The article concludes with a discussion of the observed findings.

This study has been motivated by a need to improve our understanding of the current crisis being experienced in the global manufacturing sector. Using Chinese small to medium manufacturers as case studies, this study has sought to investigate whether incremental innovation activities could increase the likelihood of surviving the current industrial crisis. Particularly, focusing exclusively on marketing innovation as a form of incremental innovation, this study has examined the link between marketing innovation, defined as improvements in product design, placement, promotion or pricing, and the likelihood of survival. A conceptual model linking market orientation, marketing innovation, competitive advantage and firm survival was theoretically derived and empirically tested using structural equation modelling. Three key findings emerged: (i) the examined Chinese manufacturing SMEs had a greater likelihood of survival had they developed and sustained a competitive advantage, (ii) that marketing innovation assisted in developing and sustaining competitive advantages based on differentiation and cost leadership and (iii) that marketing innovation capabilities improved when the Chinese manufacturing SMEs were competitor oriented and had good inter-functional coordination capabilities. This study has aimed to make three important contributions. First, while innovation as a driver of performance has been well established in the literature (e.g. Butler, 1988, Lengick-Hall, 1992 and Porter and Stern, 2001), marketing innovation as a determinant of performance has received less scrutiny (Han et al., 1998, Hurley and Hult, 1998 and Lukas and Ferrell, 2000). This study adds to the marketing innovation literature. Grounded in the resource-based view of strategy and organizational capability theory, this study views marketing innovation as a key resource and capability that small and medium manufacturers can use to manage their environment, perform and even survive in tough economic times (Grewal & Tansuhaj, 2001). Second, studies examining the “market orientation–innovation–performance” link are scarce in the academic business literature. This study aims at extending extant literature by examining how market orientation allows firms to improve their marketing innovation capability and in turn, perform better. Last but not least, given the empirical modelling was conducted using data from the Chinese organizational context, the third contribution of this paper is to extend the extant enquiry on market orientation which has primarily focused on the North American and Western Europe environment (Grewal & Tansuhaj, 2001). However, as with any research, these findings need to be interpreted with caution because of methodological limitations. First, the caveats concerning self-reported questionnaires apply to this study. For example, the dependent measure of survival used in this study is a perceptual one, informed and developed based on the interviews in the pre-testing stage. The observed Cronbach alpha of 0.68 for survival indicates potential reliability concerns, suggesting the need for measure refinement in future research. This paper attempted to minimise this weakness through a post-hoc correlation analysis using objective dummy measures of survival. However, the collected data is accurate as of the first quarter of 2009. With the industrial and economic crises still ongoing at the time of writing, firms that were noted as survivors might succumb to the ramifications of the economic crisis in the time that this article goes to press. Consequently, the second limitation of this study is that the findings ought to be only exploratory in nature since a cross-sectional study might not adequately capture a longitudinal-type phenomenon such as firm survival. A follow-up study at the end of the current crises would assist in validating the current exploratory findings. Furthermore, it needs to be reinforced that the exploratory nature of this study means that no causal relationships can be inferred from the empirical results. Rather, the empirical analysis indicates observed correlations. Last but not least, this research did not focus on medium to large manufacturers. Additional research is, therefore, required to provide further insights on the role of marketing innovation in assisting medium to large manufacturing firms to manage the current industrial and economic crises.