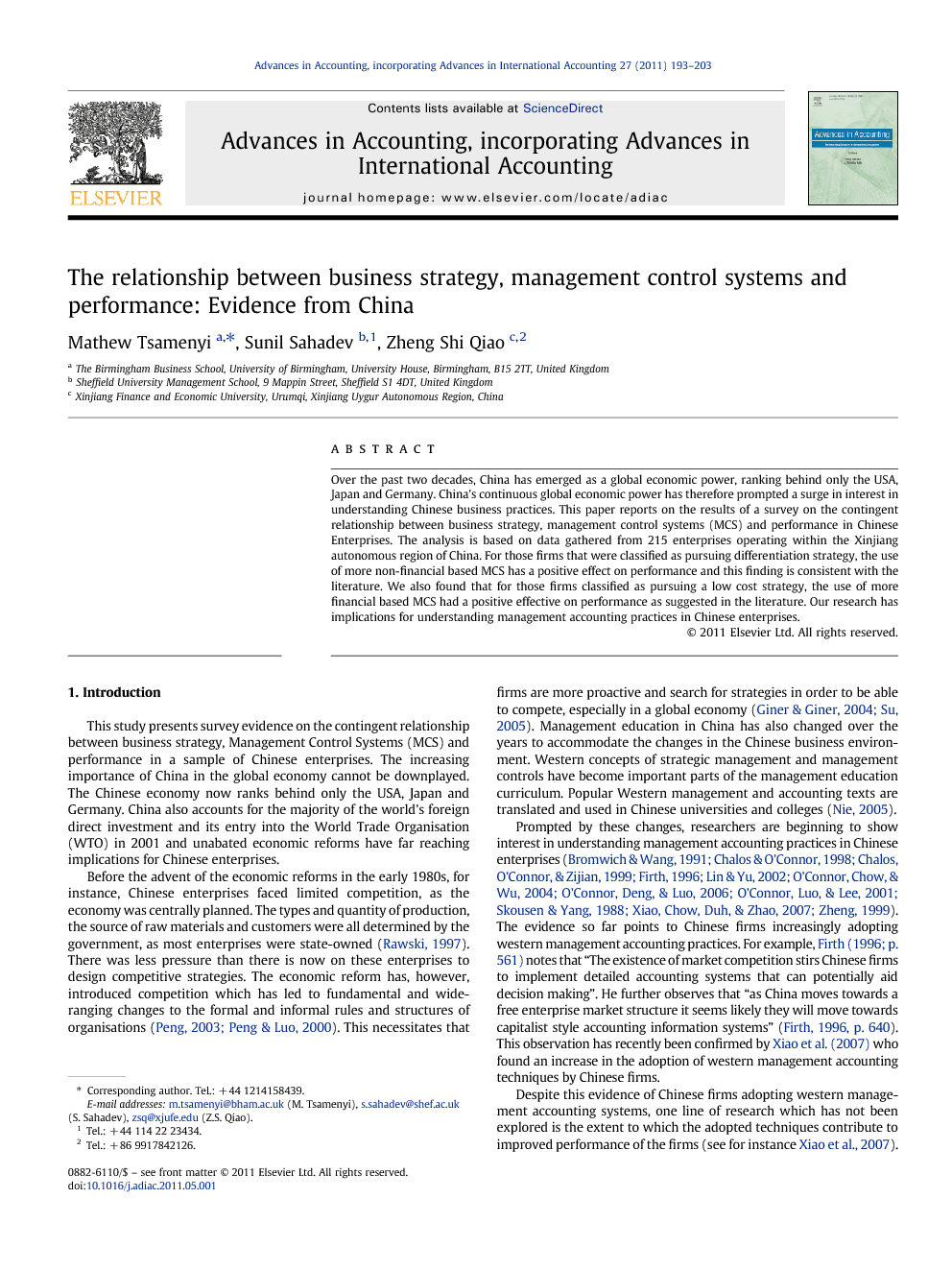 Over the past two decades, China has emerged as a global economic power, ranking behind only the USA, Japan and Germany. China's continuous global economic power has therefore prompted a surge in interest in understanding Chinese business practices. This paper reports on the results of a survey on the contingent relationship between business strategy, management control systems (MCS) and performance in Chinese Enterprises. The analysis is based on data gathered from 215 enterprises operating within the Xinjiang autonomous region of China. For those firms that were classified as pursuing differentiation strategy, the use of more non-financial based MCS has a positive effect on performance and this finding is consistent with the literature. We also found that for those firms classified as pursuing a low cost strategy, the use of more financial based MCS had a positive effective on performance as suggested in the literature. Our research has implications for understanding management accounting practices in Chinese enterprises.

This study presents survey evidence on the contingent relationship between business strategy, Management Control Systems (MCS) and performance in a sample of Chinese enterprises. The increasing importance of China in the global economy cannot be downplayed. The Chinese economy now ranks behind only the USA, Japan and Germany. China also accounts for the majority of the world's foreign direct investment and its entry into the World Trade Organisation (WTO) in 2001 and unabated economic reforms have far reaching implications for Chinese enterprises. Before the advent of the economic reforms in the early 1980s, for instance, Chinese enterprises faced limited competition, as the economy was centrally planned. The types and quantity of production, the source of raw materials and customers were all determined by the government, as most enterprises were state-owned (Rawski, 1997). There was less pressure than there is now on these enterprises to design competitive strategies. The economic reform has, however, introduced competition which has led to fundamental and wide-ranging changes to the formal and informal rules and structures of organisations (Peng, 2003 and Peng and Luo, 2000). This necessitates that firms are more proactive and search for strategies in order to be able to compete, especially in a global economy (Giner and Giner, 2004 and Su, 2005). Management education in China has also changed over the years to accommodate the changes in the Chinese business environment. Western concepts of strategic management and management controls have become important parts of the management education curriculum. Popular Western management and accounting texts are translated and used in Chinese universities and colleges (Nie, 2005). Prompted by these changes, researchers are beginning to show interest in understanding management accounting practices in Chinese enterprises (Bromwich and Wang, 1991, Chalos and O'Connor, 1998, Chalos et al., 1999, Firth, 1996, Lin and Yu, 2002, O'Connor et al., 2004, O'Connor et al., 2006, O'Connor et al., 2001, Skousen and Yang, 1988, Xiao et al., 2007 and Zheng, 1999). The evidence so far points to Chinese firms increasingly adopting western management accounting practices. For example, Firth (1996; p. 561) notes that “The existence of market competition stirs Chinese firms to implement detailed accounting systems that can potentially aid decision making”. He further observes that “as China moves towards a free enterprise market structure it seems likely they will move towards capitalist style accounting information systems” (Firth, 1996, p. 640). This observation has recently been confirmed by Xiao et al. (2007) who found an increase in the adoption of western management accounting techniques by Chinese firms. Despite this evidence of Chinese firms adopting western management accounting systems, one line of research which has not been explored is the extent to which the adopted techniques contribute to improved performance of the firms (see for instance Xiao et al., 2007). This paper explores this issue by investigating how MCS supports the strategic orientation of a sample of Chinese firms. There is evidence to suggest that strategy has become an important issue in Chinese organisations given the increasing competitive environment they now operate in (Li, 2000, Li et al., 2005, Lukas et al., 2001, Peng, 2003, Peng and Luo, 2000, Pyke et al., 2002, Robb and Xie, 2001, Robb and Xie, 2003, Tan and Litschert, 1994, Wang et al., 2004 and Zhao et al., 2005). The Chinese government is also now requesting State-Owned Enterprises (SOEs) to formulate their own strategic plan (Szirmai and Ruoen, 2000 and Zhang et al., 2002). To achieve better performance and competitive advantage, these firms must ensure that their strategies are aligned with their MCS (Auzair and Langfield-Smith, 2005, Cadez and Guilding, 2008, Chenhall, 2005, Collins et al., 1997, Cooper, 1996, Govindarajan, 1988, Govindarajan and Gupta, 1985, Jermias and Gani, 2004, Kald et al., 2000, Simons, 1987 and Simons, 1990). This paper aims to provide empirical evidence on the contingent relationship between MCS, business strategy and performance in Chinese enterprises.

This study was designed to empirically test the contingent relationship between business strategy, MCS and firm performance in a sample of Chinese enterprises. The Chinese economy has changed significantly over the past two decades as a result of the country's economic reforms and membership of the WTO. Businesses operating in China now face increasing competition. Previous studies have documented that Chinese enterprises are adopting western management accounting practices in the face of the changes in the business environment (Firth, 1996 and Xiao et al., 2007). By examining the contingent relationship between business strategy, MCS and performance in our study, we aim to contribute to the understanding of the effectiveness of the adopted MCS. Two main hypotheses were tested in the study. Both the hypotheses were found to be validated in the study. First the finding supports our hypothesis 1 that firms that follow a cost leadership strategy would be better off if they followed financial based MCS (Govindarajan, 1988; Jermias and Gani, 2004 and Langfield-Smith, 1997). Hypothesis 2 is also supported as it is seen that the relationship between differentiation strategy and performance can be enhanced by adopting non-financial based MCS. We have therefore confirmed findings in previous studies that for firms to achieve optimum performance they need to match their MCS with their strategy. While this has been established in the literature, the evidence is largely on western firms. Similar to some recent studies on other emerging economies (such as Jermias & Gani, 2004; and Cadez & Guilding, 2008) our research has confirmed that the strategy/MCS alignment matters to firms in these environments as well. A small number of the firms in our study (about seven firms) cannot explicitly be classified as either low cost or differentiated. Our conclusion is that these firms do not have an explicit strategy as suggested in the literature (Porter, 1980). While it is possible that these firms do not have any strategy at all, it is also possible that they are combining both low cost and differentiated strategies. While Porter (1980) cautioned against this, organisations are now under increasing pressure to produce at low cost and at the same time to provide customers with high quality products and good customer care (Chenhall, 2003). Under this circumstance, empirical questions that need exploring are: what types of MCS are suitable for such a hybrid strategy? What is the balance between financial and non-financial MCS for a hybrid strategy? We believe answers to these questions will shed more light on the strategy-MCS debate. The results presented in the paper contribute towards the understanding of the effectiveness of MCS in Chinese enterprises. However, the study is not devoid of limitations. One major limitation of the study relates to our assumption that strategy is deliberately planned. This approach, while making it easier for us to operationalise the strategy variables, precluded us from exploring the emergent character of strategy (Bhimani and Langfield-Smith, 2007, Mintzberg, 1987a, Mintzberg, 1987b, Mintzberg et al., 1995 and Mintzberg and Waters, 1985) in these firms. MCS is likely to play a different role when strategies are emergent. For example, it has been argued that the adoption of formal MCS could be counter-productive when the strategy is not deliberately planned (Ittner & Larcker, 2003; Cadez & Guilding, 2008). Another limitation of the study relates to the instrument we adopted in measuring strategy. Our instrument assumes that strategy can be measured on a continuum with low cost and differentiated strategies at the opposite end (Govindarajan, 1988 and Jermias and Gani, 2004). However, this approach can be criticised on the grounds that it does not allow us to determine firms that follow both strategies at the same time. A possible solution is to adopt a separate measurement instrument for both sets of strategies (see for instance Auzair & Langfield-Smith, 2005). Third, the study assumes the absence of any variables affecting performance except for the strategy followed and the MCS types. Issues like market conditions have not been taken into consideration. In terms of future research we see the opportunity to examine the role of MCS in strategic decision making in Chinese enterprises using a case study approach. This is necessary since strategies can be emergent and complex than postulated in contingency type studies. For example, we have identified that some of the firms in our sample do not have an explicit strategy. The contingency type of study we adopted could not provide answers to this. We believe case studies can be used to explore some of the unanswered questions from our contingency study. Moreover a case study approach will enable us to have a better understanding of how strategy development and implementation and the role of MCS are embedded in social and political contexts.