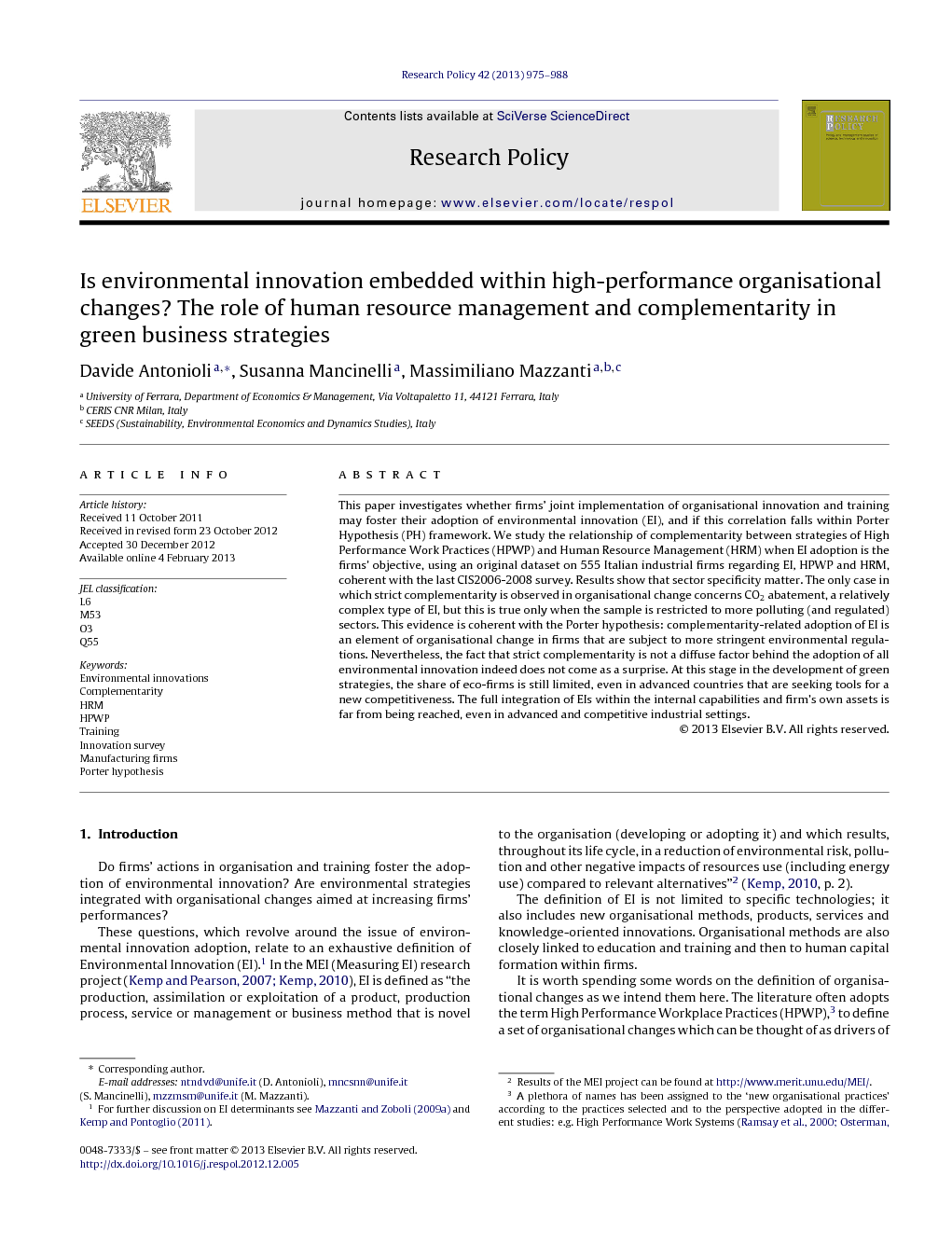 This paper investigates whether firms’ joint implementation of organisational innovation and training may foster their adoption of environmental innovation (EI), and if this correlation falls within Porter Hypothesis (PH) framework. We study the relationship of complementarity between strategies of High Performance Work Practices (HPWP) and Human Resource Management (HRM) when EI adoption is the firms’ objective, using an original dataset on 555 Italian industrial firms regarding EI, HPWP and HRM, coherent with the last CIS2006-2008 survey. Results show that sector specificity matter. The only case in which strict complementarity is observed in organisational change concerns CO2 abatement, a relatively complex type of EI, but this is true only when the sample is restricted to more polluting (and regulated) sectors. This evidence is coherent with the Porter hypothesis: complementarity-related adoption of EI is an element of organisational change in firms that are subject to more stringent environmental regulations. Nevertheless, the fact that strict complementarity is not a diffuse factor behind the adoption of all environmental innovation indeed does not come as a surprise. At this stage in the development of green strategies, the share of eco-firms is still limited, even in advanced countries that are seeking tools for a new competitiveness. The full integration of EIs within the internal capabilities and firm's own assets is far from being reached, even in advanced and competitive industrial settings.

In the aim of providing new understanding about the effects of firms’ organisational changes on EI adoption, we study the relationships between human resource management and internal processes of organisational change in labour and production through the lens of the complementarity theory. Though the relevance of HPWP/HRM for developing relatively new and complex forms of innovations such as EI has been noticed by scholars that contributed to the development of the Porter hypothesis, the lack of integration between environmental economics and HRM disciplines has blocked research in this specific realm. We analyse diverse situations of potential complementarity between HRM and organisational changes, covering 4 different types of EI (CO2 abatement, emissions reduction, EMS/ISO adoption, energy/material efficiency). We show that for EI adopted by firms located in a densely industrial region of the European Union which is highly exposed to international competition, strict complementarity is rarely present. In contrast, when looking at the full sample of manufacturing firms, strict substitutability emerges in one case. Training in key competencies and organisational changes in production seem to suffer from a mismatch when considering their integration which highlights how green strategies are not fully embedded within firms’ reorganisation changes. Though the fact that EI development in countries such as Italy is still in a non-mature phase might be part of the explanation for this, the evidence can signal ‘problems’. We cannot say that observing substitutability is a weakness, given that EIs are possibly correlated to single factors. We note a lack of systemic innovation capability, which is one of the brakes behind the poor competitiveness and environmental performance of some (southern) EU countries at the moment. The evidence confirms the well-known fact that complementarity is not to be taken for granted: it is industry, innovation and factor specific. Its achievement requires a full screening of firms’ ‘existent assets’ and of those that could be ‘created’ (e.g. complementarity between assets as immaterial source of competitiveness). This requires proper investments in the re-engineering of firm organisation. Firms that are on the frontier of environmental technological challenges (more polluting firms, more heavily regulated firms) instead present some evidence which does not reject the ‘Porter hypothesis’ and which we here enrich with complementarity concepts. Complementarity emerges for CO2 abatement, through the integration of training coverage and organisation of production strategies. Sector specificity, namely heavier environmental regulations, influences the way firms behave with respect to the setting up of complementarity strategies. We observe complementarity related adoption of EI as an element of organisational change in firms that are subject to more stringent regulations. Nevertheless, the fact that strict complementarity is not a diffused factor behind the adoption of all environmental innovations comes in no way as a surprise. At this stage in the development of green strategies, the share of eco-firms is still limited even in advanced countries that are seeking for new competitive tools. Integration of EIs with the internal capabilities and firm's own assets is far from being achieved even in advanced and competitive industrial settings. Further research should be aimed both at extending evidence to an EU level (through the CIS2008) and at assessing the effects of EI (among EIs and between EI and other techno-organisational changes) on economic and environmental firms’ performance by also using a complementarity based perspective.