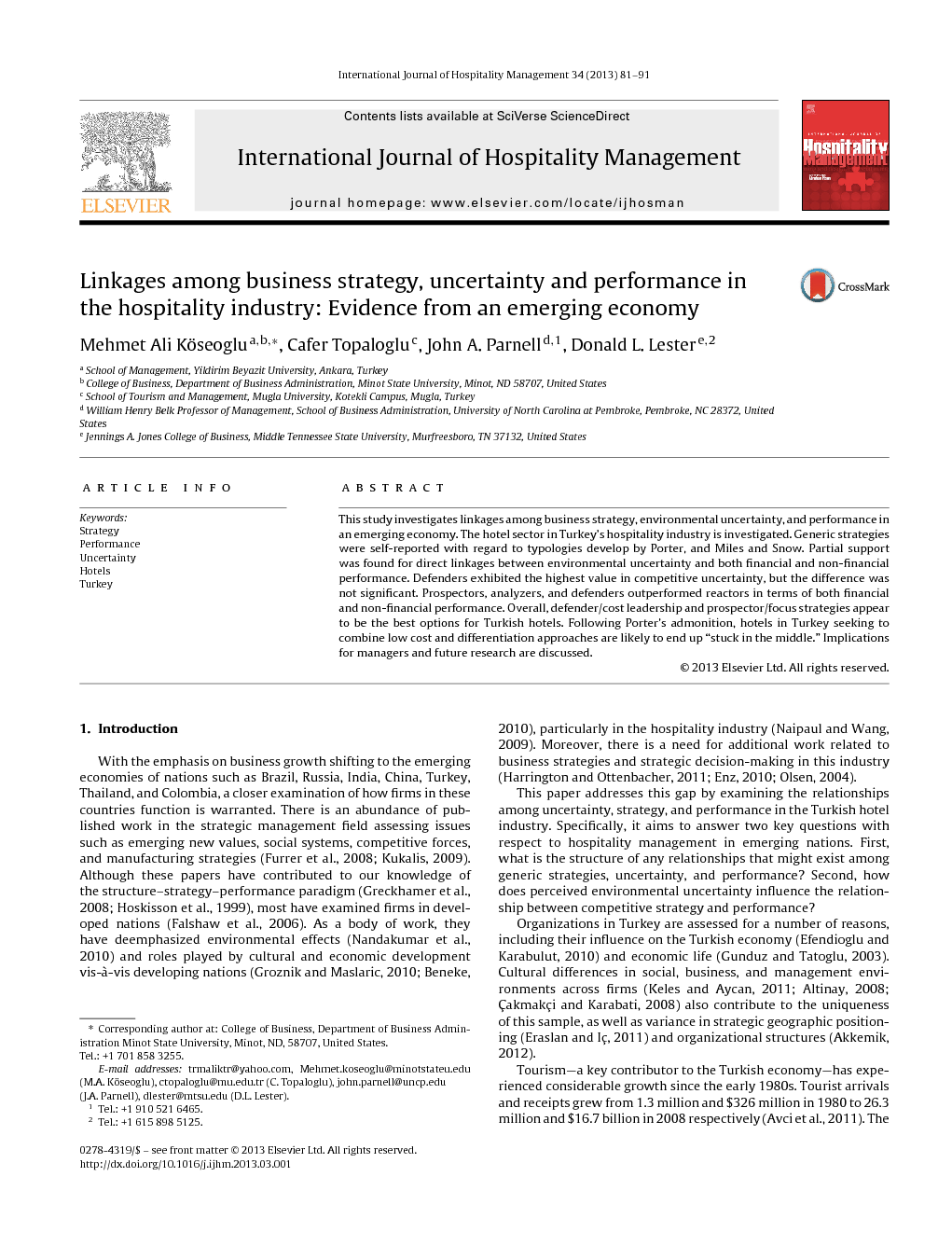 This study investigates linkages among business strategy, environmental uncertainty, and performance in an emerging economy. The hotel sector in Turkey's hospitality industry is investigated. Generic strategies were self-reported with regard to typologies develop by Porter, and Miles and Snow. Partial support was found for direct linkages between environmental uncertainty and both financial and non-financial performance. Defenders exhibited the highest value in competitive uncertainty, but the difference was not significant. Prospectors, analyzers, and defenders outperformed reactors in terms of both financial and non-financial performance. Overall, defender/cost leadership and prospector/focus strategies appear to be the best options for Turkish hotels. Following Porter's admonition, hotels in Turkey seeking to combine low cost and differentiation approaches are likely to end up “stuck in the middle.” Implications for managers and future research are discussed.

With the emphasis on business growth shifting to the emerging economies of nations such as Brazil, Russia, India, China, Turkey, Thailand, and Colombia, a closer examination of how firms in these countries function is warranted. There is an abundance of published work in the strategic management field assessing issues such as emerging new values, social systems, competitive forces, and manufacturing strategies (Furrer et al., 2008 and Kukalis, 2009). Although these papers have contributed to our knowledge of the structure–strategy–performance paradigm (Greckhamer et al., 2008 and Hoskisson et al., 1999), most have examined firms in developed nations (Falshaw et al., 2006). As a body of work, they have deemphasized environmental effects (Nandakumar et al., 2010) and roles played by cultural and economic development vis-à-vis developing nations (Groznik and Maslaric, 2010 and Beneke, 2010), particularly in the hospitality industry (Naipaul and Wang, 2009). Moreover, there is a need for additional work related to business strategies and strategic decision-making in this industry (Harrington and Ottenbacher, 2011, Enz, 2010 and Olsen, 2004). This paper addresses this gap by examining the relationships among uncertainty, strategy, and performance in the Turkish hotel industry. Specifically, it aims to answer two key questions with respect to hospitality management in emerging nations. First, what is the structure of any relationships that might exist among generic strategies, uncertainty, and performance? Second, how does perceived environmental uncertainty influence the relationship between competitive strategy and performance? Organizations in Turkey are assessed for a number of reasons, including their influence on the Turkish economy (Efendioglu and Karabulut, 2010) and economic life (Gunduz and Tatoglu, 2003). Cultural differences in social, business, and management environments across firms (Keles and Aycan, 2011, Altinay, 2008 and Çakmakçi and Karabati, 2008) also contribute to the uniqueness of this sample, as well as variance in strategic geographic positioning (Eraslan and Iç, 2011) and organizational structures (Akkemik, 2012). Tourism—a key contributor to the Turkish economy—has experienced considerable growth since the early 1980s. Tourist arrivals and receipts grew from 1.3 million and $326 million in 1980 to 26.3 million and $16.7 billion in 2008 respectively (Avci et al., 2011). The industry employs over 2.5 million individuals and includes 2514 hotels with operational licenses and 776 with investment licenses. There are many resort hotels in major destinations, including the southwestern cities of Antalya and Mugla. Tourism in Turkey is seasonal, and hotels experience a number of challenges, including low occupancy rates, a high dependency on foreign tour operators, transportation and logistics problems, inadequate infrastructure, a lack of qualified staff, a lack of sound marketing strategies, and crises due to terrorism and international conflicts (Tosun et al., 2008, Okumus and Karamustafa, 2005 and Uyar and Bilgin, 2011). The paper is organized as follows. First, a review of the literature with respect to strategy, uncertainty, and performance from both general and hotel-specific perspectives leads to the development of hypotheses. This is followed by the details of the study methodology and results. A discussion of empirical evidence is then presented. Conclusions, study limitations, and opportunities for future research are highlighted for both academicians and practitioners in the final section.

This study investigates linkages among business strategy, environmental uncertainty and organizational performance in Turkish hotels, employing generic strategy typologies from Porter, and Miles and Snow. Prospectors, analyzers, and defenders outperformed reactors along both financial and non-financial performance measures. Linkages between environmental uncertainty and both financial and non-financial performance were partially supported. The results of this study provide several key implications for managers in hotels and other tourism organizations. Considering the Miles and Snow typology, defender and prospector strategies appear to be the best options for Turkish hotels. With regard to Porter's typology, the polar extremes of cost leadership and differentiation appear to be more appropriate. In other words, hybrid (e.g., analyzer) and combination strategies (e.g., cost leadership and differentiation) do not appear to be the best options. Following Porter's admonition, hotels in Turkey seeking to combine approaches are likely to end up “stuck in the middle,” a finding supported by previous work (Acquaah and Yasai-Ardekani, 2008 and Kim et al., 2004). Competitive strategies at Turkish hotels appear to be influenced by environmental uncertainty although correlations between market uncertainty and performance—both financial and non-financial—were not significant. Earlier studies (e.g., Namiki, 1989 and Parnell, 1997) failed to identify consistent and significant differences in performance across the Miles and Snow business strategies. In the present study, however, uncertainty appears to play a more substantial role (see also Avci et al., 2011). These findings also help explain how managers conceptualize the relationships among typologies proposed by Miles and Snow, and Porter, perceived environmental uncertainty, and financial and non-financial performance. For example, defenders that also pursue a cost leadership strategy tend to enjoy more success in terms of both financial and non-financial performance. Prospectors that employ a focus strategy also tend to perform well. In addition, relationships exist between generic strategies and the constructs of organizational learning (Ribbens, 1997 and Oslan and Yaprak, 1995) and knowledge management (Franken and Braganza, 2006), factors that tend to receive relatively little attention in Turkish firms (Aydoğan et al., 2011, Erigüç and Yalçıin, 2007, Köseoglu et al., 2010a and Köseoglu et al., 2010b). The findings presented herein suggest that joint ventures between multinational firms and Turkish hotels might be fruitful. Turkish hotels tend to emphasize cost leadership and lack requisite organizational and technological capabilities. In contrast, their larger counterparts abroad may be able to provide structural, technological, or management expertise (Meyer and Estrin, 2001). Several shortcomings should be acknowledged. The present study considers only a small region of Turkey, one with strong tourism ties; replications in other emerging nations are needed. The present study also assessed environmental uncertainty only from a subjective perspective (i.e., perceived environmental uncertainty). Moreover, almost one-half of the participating managers graduated from schools without tourism programs and therefore may not be knowledgeable about the fundamental dynamics of the hotel industry. Hence, studies limited to subjects with tourism training might produce different results. Moreover, the sample includes only 3-star, 4-star, and 5-star hotels. Replications in other categories are warranted. Analytical and interpretational problems arise when constructs and surveys are modified or translated to fit samples in other cultures. Although the survey was pretested in the present study, changes in survey instruments require scholars to make judgments that can influence outcomes, an ongoing challenging in cross-cultural research (Parnell et al., 2012 and Punnett and Shenkar, 1994). Survey research is feasible when language barriers can be overcome, but it can be problematic when significant cultural or linguistic differences exist. While methodological consistency in cross-national research is the ideal, some constructs developed in advanced Western nations—such as the notion of perceived environmental uncertainty—may not be completely understood in emerging nations. The development of alternative culture-specific constructs might be required to accurately explain management behavior. The prospects for additional research are attractive. For instance, strategy-uncertainty-performance connections are assessed in the present study by considering the demographic features of managers and hotels. A number of investigations have demonstrated the link between hotel characteristics and competitive strategies (Jonsson and Devonish, 2009). Additional studies can consider this link in greater detail. The present study can be repeated in other developing countries such as Russia, China, Thailand, Colombia, Brazil and India. Moreover, the inclusion of cultural factors can provide additional insight into the uncertainty–strategy–performance nexus.