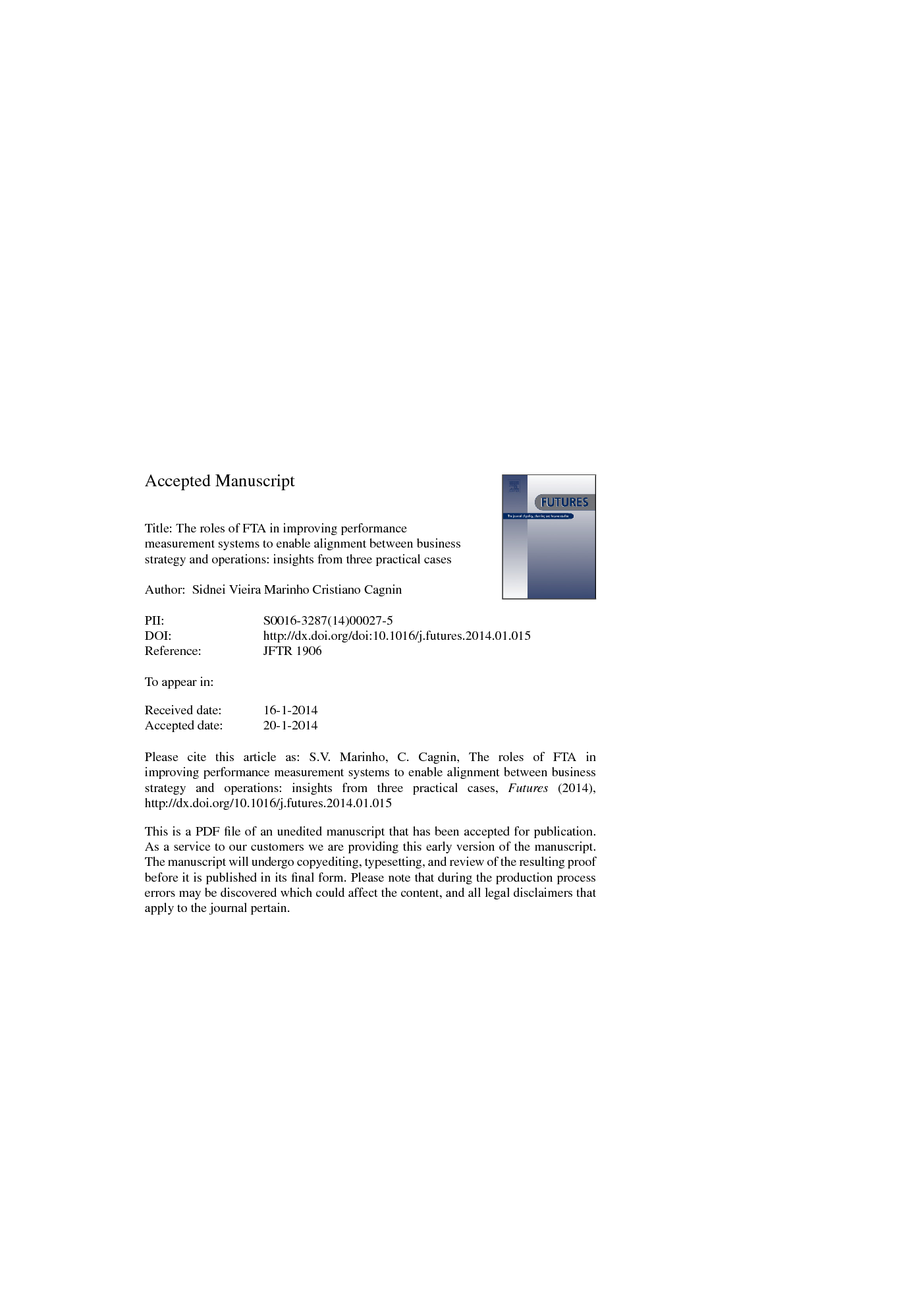 Despite the growing number of publications on firms’ performance measurement systems (PMS), consensus has not yet been achieved on the steps for their implementation within an organization. Against this background the authors report the lessons learnt in developing and testing a new PMS that they have devised advancing on the Balance Scorecard (BSC) approach. In reviewing three cases in which their system was applied, they highlight that the inclusion of Future-oriented Technology Analysis (FTA) would have prevented some of the failures experienced. FTA is seen as crucial in linking strategy and operations with a long-term vision of where a firm sees itself in the future. In this regard, FTA holds the promise to embed critical aspects for jointly shaping common directions to follow across a firm's value chain. These include the notion of stakeholder involvement in decision processes, of mutual appreciation and a shared understanding of stakeholders’ views as well as of joint experimentation and mutual learning. The authors conclude by highlighting specific ways in which FTA can be integrated in the PMS proposed.

One of the main challenges faced by organisations resides in executing planned strategies [1], [2] and [3]. The misalignment between strategy-design and implementation has been long identified [4] and there have been several attempts by scholars and practitioners to tackle this challenge. Several tools have been developed that foster alignment between strategy and actions, and across value or supply chains [5]. However, many of these models display important weaknesses. In particular, they fail to tackle efficiently the communication of the strategy across all organisational levels [6], [7], [8], [9] and [10], as well as to deploy the strategy in short term operational plans [8] and [10], involve mid-management in strategy formulation [6], execution is a component of strategy and must be the core element of the company's culture [9] and adjustment of organisational strategy elements [6] and [7]. Furthermore there is evidence that firms’ efforts are currently concentrated on activities targeted at strategy design, rather than its implementation [11], [12], [13], [14], [15] and [16]. According to [17], this happens despite the awareness that both researchers and executives have that organisational performance is directly linked to an alignment between endogenous variables (strategy, structure and processes) and exogenous ones (e.g. environmental uncertainty and technology). The truth is that, as stated by [18], the separation between strategy formulation and implementation constitutes a false dichotomy, since these are intrinsically connected through the integration of thought and action. In this context, systems which are able to measure the performance of a firm (performance measurement systems or PMS) have become a critical asset for an organisation aiming to successfully implement its defined strategy. Such systems aim at enhancing a firm’ advantages, both internal and external, with a focus on process improvements. Ultimately, PMS should enable businesses to build the necessary actions to reach its strategy and excel [19]. PMS are based on performance indicators. These systems have been developed to allow an organisation to focus on results and to allocate resources rapidly and efficiently. At the same time, PMS should amplify the controls a firm has over the implementation of strategy [20]. The implementation of a strategy via PMS should, therefore, allow an organisation to develop the necessary targets, actions and behaviours across its value chain in line with the defined strategy, in a sort of cause-effect relationship [10], [21], [22] and [23]. Finally, both the financial and non-financial indicators selected through the PMS should enable new targets or actions to be developed or adjustments in the strategy to take place. This happens through feedback instruments embedded in the PMS. The balanced scorecard (BSC) is the most common PMS [24]. The BSC is a management system that presents a firm's vision and strategies in four perspectives: financial, customer, internal business process, and learning and growth [10]. These perspectives have their objectives outlined in measures, targets, and initiatives through cause and effect relationships (hypotheses) [25]. The BSC is considered to be innovative since it includes some of the elements which are of greatest importance to enable a strategy to be implemented across business value chains [25]. These elements are: (1) transformation of a strategy into operational actions; (2) creation of hypotheses based on cause-effect relationships; (3) monitoring of both financial and non-financial measures; and (4) alignment and management of the scope of objectives facilitating feedback and strategic learning with the aim of transforming strategy into a continuous process. Despite its advantages the BSC is still not capable to align convincingly strategy design and implementation, partly because it is rooted in a static and linear view of management and does not take into account the ability to flexibly adapt and change over time (Annex 1). The authors thus developed a new PMS to tackle these limitations, which is presented in section 2. The main dimensions being tackled are: organisational learning, critical analysis of strategic processes, alignment between strategy and its implementation in the value chain, participation in decision making, and relationship between critical success factors. Section 3 outlines the empirical application of the proposed system in three case studies. Results show, however, that the link provided between strategy development and its implementation across a firm value chain does not allow the whole system to become flexible and adaptive over time. FTA is therefore suggested, in section 4, as a possible instrument to deal with such shortcomings and improve the operationalisation of the proposed system. In particular, we argue that embedding FTA in the system would enable firms to steer solutions to possible challenges through joint-up decision making and implementation processes. Finally, section 5 summarizes the main conclusions.

The system proposed was developed based on perceived gaps in the process of implementing the BSC. The guiding objective was to combine characteristics inherent to PMS, such as participation, dynamism and its direct relationship with organizational strategy. Therefore, contributions from a variety of tools were combined in such a manner as to allow these objectives to be embedded within a system based on the BSC. The application of the proposed system in practice shows that the notion of stakeholder involvement, mutual experimentation and learning, and of a common vision to be pursued across the system is however still neglected. The paper attempts to bridge such gap by bringing together management research and practice with FTA, which in itself is an original contribution to the former field. By doing so the authors’ claim that the use of the system proposed aligned with FTA helps overcoming overall PMS (and in particular BSC) limitations. It does so by supporting the shaping and monitoring of complex and dynamic systems. Hence, it should effectively enable the overall system under analysis (i.e. value chain) and individuals to become adaptive over time. Finally, embedding FTA within the system proposed shall enable firms to steer solutions to possible challenges through joint-up decision making and implementation processes. These include the coordination and mobilisation of resources across the value chain. Ultimately, the renewed system with embedded FTA supports the system under analysis (i.e. value chain) to undertake systemic transitions and to develop new configurations through a multi-level governance approach, as well as mutual experimentation and learning. However, in order to validate and refine such a renewed system the authors propose its application in practice as an avenue for future research.