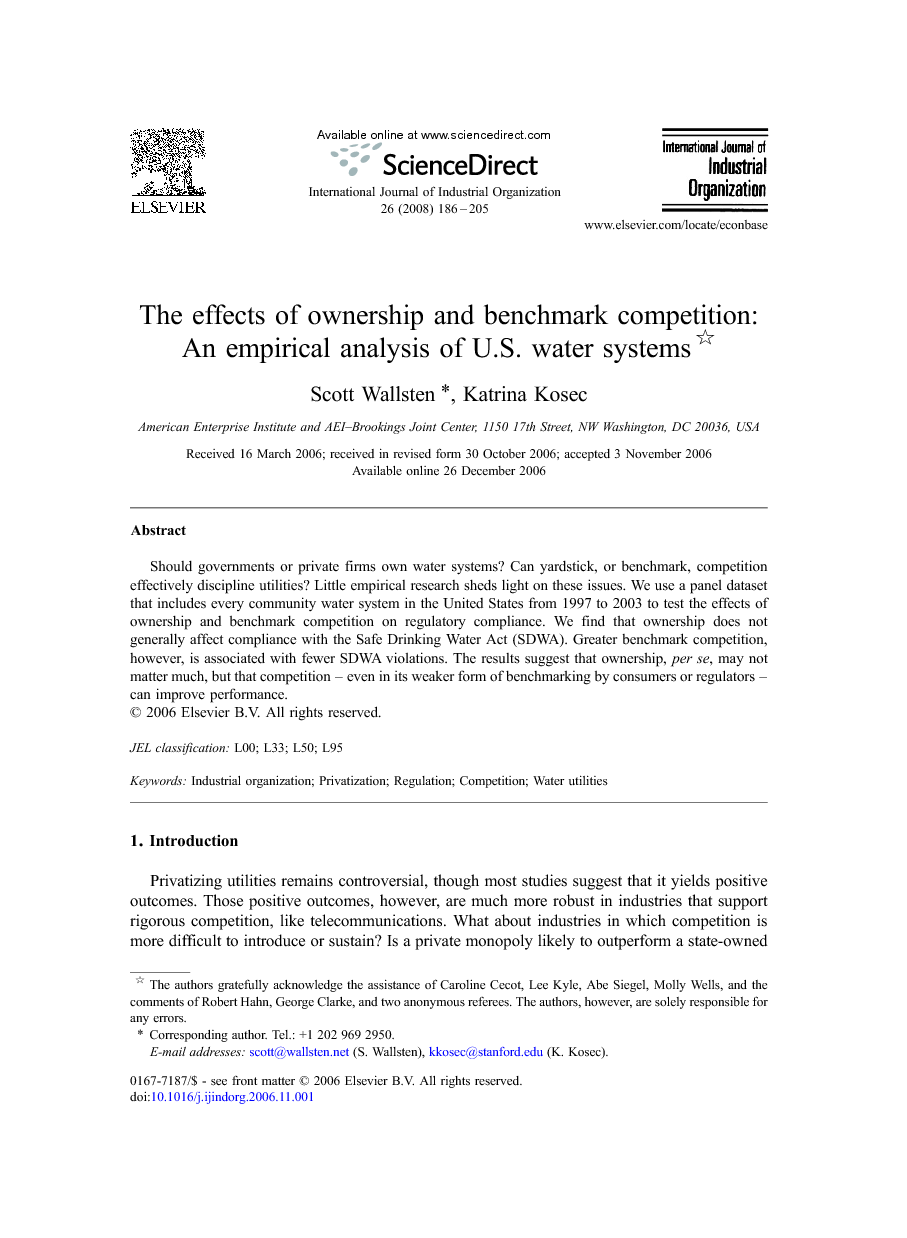 Should governments or private firms own water systems? Can yardstick, or benchmark, competition effectively discipline utilities? Little empirical research sheds light on these issues. We use a panel dataset that includes every community water system in the United States from 1997 to 2003 to test the effects of ownership and benchmark competition on regulatory compliance. We find that ownership does not generally affect compliance with the Safe Drinking Water Act (SDWA). Greater benchmark competition, however, is associated with fewer SDWA violations. The results suggest that ownership, per se, may not matter much, but that competition – even in its weaker form of benchmarking by consumers or regulators – can improve performance.

Privatizing utilities remains controversial, though most studies suggest that it yields positive outcomes. Those positive outcomes, however, are much more robust in industries that support rigorous competition, like telecommunications. What about industries in which competition is more difficult to introduce or sustain? Is a private monopoly likely to outperform a state-owned monopoly? Can yardstick, or benchmark, competition discipline private or public providers in the absence of head-to-head competition? This paper attempts to answer these questions in the context of drinking water systems in the United States. The ideal form of ownership in network industries remains heavily debated. Water privatization in the United Kingdom, for example, is still a hot issue nearly twenty years after Margaret Thatcher sold ten regional water authorities and established a new regulator. In the United States, where nearly all utilities are owned or operated by private firms, around 80% of the population receives water from publicly-owned systems. Proponents of private ownership argue that firms can deliver services more efficiently than can governments. Governments have diverse and often contradictory objectives that can lead to a misallocation of resources, and may face incompatible incentives when they act as both owner and regulator of a utility. In addition, politicians may feel pressure to provide jobs in the utility to constituents, for example, rather than investing in the water network. Opponents of private ownership counter that privatization is difficult and impractical given water and sewerage externalities and the limited scope for competition. Some object to the very idea of considering water an economic good or allowing a private company to run a water system. Public Citizen (2004), an outspoken critic of privatization, highlights the intense feelings regarding water privatization, claiming that “perhaps the greatest theft of common resources facing humanity and the planet is the corporate takeover of the world's water.” While direct competition among piped water systems is essentially nonexistent, benchmark, or yardstick, competition may be possible. Shleifer (1985) formalized a model of regulation via yardstick competition in which a regulated firm's prices depend on other firms' costs. Benchmarking may also apply to observable information other than prices. Even if consumers cannot choose who supplies their drinking water, utilities may face performance pressure if consumers or regulators can compare systems. Consumers dissatisfied with their utilities could express their displeasure through their elected representatives, while regulators could use the information from benchmark comparisons to demand price or quality changes with potentially dramatic effects on firms in the future. Despite the passions the issue raises, there is scant empirical evidence on whether public or private water systems tend to perform better and whether benchmark competition actually improves outcomes. To our knowledge, no systematic, empirical analysis compares public and private water systems in the United States and we are not aware of any empirical literature exploring the potential impact of benchmark competition in the water sector. We address these gaps by exploring U.S. water quality and household expenditures on water by system ownership type and the degree of benchmark competition faced. In particular, we use a panel dataset that includes every community water system in the country from 1997 to 2003 to test the effects of ownership and benchmark competition on violations of the Safe Drinking Water Act (SDWA). Controlling for location fixed effects, income, the share of the population that is urban, ownership concentration in the local water market, system size, water source, and year fixed effects, we find little difference between public and private ownership with regard to SDWA violations. Among smaller water systems, private ownership is associated with fewer violations of maximum contaminant levels but more monitoring and reporting violations than public systems. Among larger systems – especially those serving more than 100,000 people – private ownership is associated with more contaminant but fewer monitoring and reporting violations. The results neither support critics of private ownership nor suggest that private ownership is superior. Overall, compliance with SDWA regulations does not appear to depend much on system ownership. Benchmark competition, however, appears to have a more robust impact. Greater benchmark competition, as measured by the concentration of the share of connections held by water systems in each county, is associated with both fewer contaminant and fewer monitoring and reporting violations. This suggests that even a weak form of competition can have positive effects on regulatory compliance. Overall, our results are consistent with the hypothesis that public or private ownership may not make much of a difference when the operator is largely monopolistic, but that even then, benchmark competition can yield tangible benefits.

The results are intriguing, but data limitations prevent us from answering related, relevant questions and answering definitively whether one type of ownership is superior. First, the private sector can be involved in piped water provision in many ways besides outright ownership, including franchising, lease contracts and concessions, build-operate-transfer contracts, and maintenance contracts (e.g., Seidenstat, 2003). Different types of public–private interactions may create different incentives that could affect outcomes. Second, our data do not permit an analysis of efficiency. We have no information on operation costs, employment, or actual prices.33 Without such information, it is not possible to directly estimate net welfare effects. Third, we do not observe the severity of contaminant violations and therefore the expected health harms that might result from them. As a result, we are unable to incorporate the real health consequences of violations into our analysis. Even a single violation of some contaminants could cause substantial health problems, while multiple violations of other contaminants grouped into the “health-based” category may have little or no impact on public health. That public water systems differ so little from private water systems is sensible. Competition drives innovation and efficiency improvements, but in the water sector competition is not as robust as in other industries. Municipalities that contract out part or all of their water systems to private operators may create competition for the contracts, and the sheer number of water utilities suggests that there may be some benchmark competition. Even this limited form of competition appears to yield some benefits. The number of violations decreases as benchmark competition increases. The results suggest that privatization debates may be misplaced. Rather than focusing on ownership, per se, regulators and policymakers should focus on ways of increasing competitive pressure.