عنوان انگلیسی
A new benchmark for Internet use: A logistic modeling of factors influencing Internet use in Canada, 2005
دانلود فوری مقاله + سفارش ترجمه 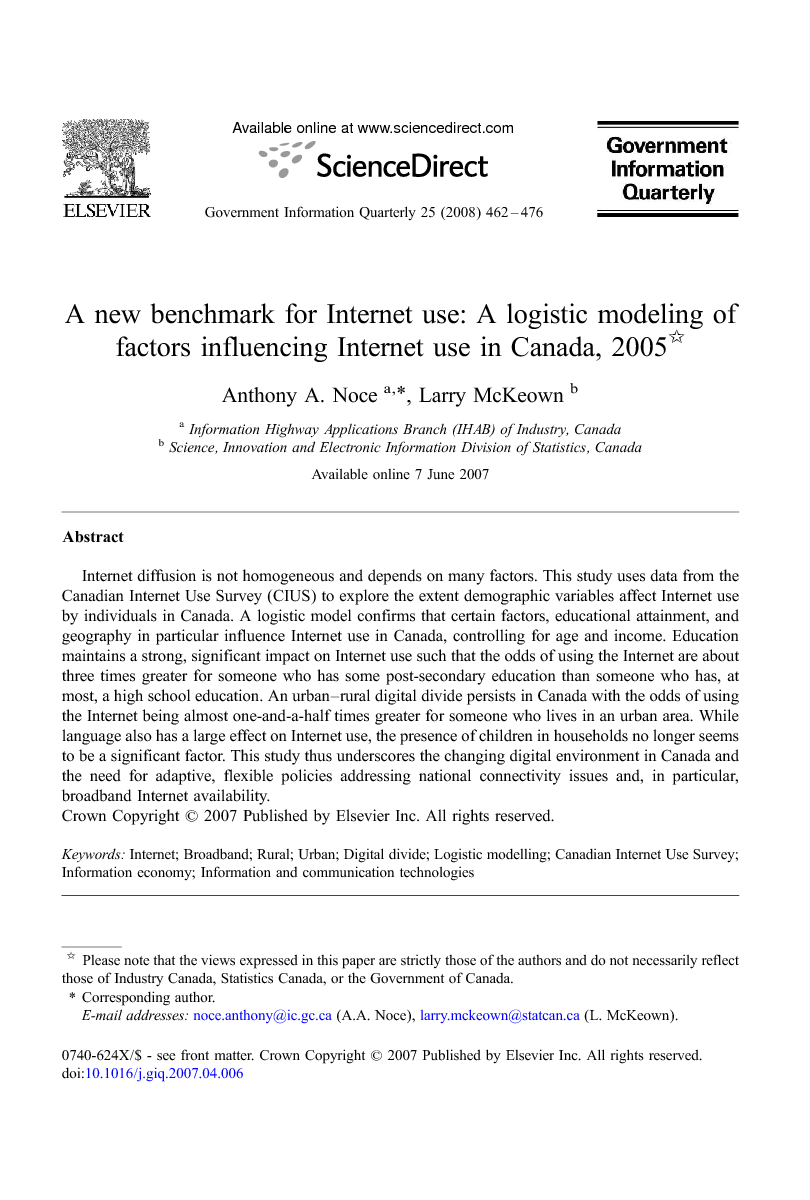 Internet diffusion is not homogeneous and depends on many factors. This study uses data from the Canadian Internet Use Survey (CIUS) to explore the extent demographic variables affect Internet use by individuals in Canada. A logistic model confirms that certain factors, educational attainment, and geography in particular influence Internet use in Canada, controlling for age and income. Education maintains a strong, significant impact on Internet use such that the odds of using the Internet are about three times greater for someone who has some post-secondary education than someone who has, at most, a high school education. An urban–rural digital divide persists in Canada with the odds of using the Internet being almost one-and-a-half times greater for someone who lives in an urban area. While language also has a large effect on Internet use, the presence of children in households no longer seems to be a significant factor. This study thus underscores the changing digital environment in Canada and the need for adaptive, flexible policies addressing national connectivity issues and, in particular, broadband Internet availability.

A community's ability and willingness to respond to technological innovation, be it exogenous or endogenous, will help to partly determine its success in the global information economy. For many years, there has been a public policy interest in Canada to promote the use of innovative technologies, especially in rural and remote areas. This included access to advanced telecommunication services in areas either not immediately served or not likely to be served by market forces because of economic unfeasibility. The sustained investments in Information and Communication Technologies (ICTs) have resulted in the common use of the Internet in Canada.1 ICTs can be improved and can compliment both existing technologies and potential new ones. However, the studies reviewed in this paper have shown that determinants of Internet use such as income, age, education, geographic location, and so forth have limited its uptake and effective utilization by some Canadians. In reference to broadband, the Canadian Radio-television and Telecommunications Commission (CRTC, 2006) reported that in 2005, virtually all Canadian households in urban centers had access to broadband services, versus 74 percent for rural centers. Thus, Internet ubiquity appears apparent only to the well connected. Internet infrastructure, like the electrical grid, induces major changes economically, socially, and politically. Therefore, the longer communities and individuals in Canada stall in their accessibility, adoption, and effective use of the Internet, the less competitive they may become relative to individuals in countries with more aggressive adoption and use rates. In this paper, we briefly review the Canadian government's policy on Internet adoption and the historical divide of its use among urbanites and rural residents. We follow with a discussion of a new Statistics Canada survey for gathering data on the use of the Internet by individuals. A logit model regression, which examines the determinants of Internet use by individuals in Canada, is then presented. The paper will conclude with a discussion of research and policy considerations reflecting the results of the logit model, with particular reference to rural access.

In summary, the authors opted for a parsimonious model to highlight the factors influencing Internet use. The model was not intended to be exhaustive in design variables nor did it include interaction effects. Educational attainment, location, and language of interview were found to be important factors that influenced Internet use during 2005. Further research is necessary to test interaction effects among these variables. Moreover, location can also be acting as a surrogate for other factors such as, for example, broadband availability. Finally, an important research avenue is the need to explore the potential nuances along the urban to rural gradient rather than using a dichotomy. The analysis also found that the presence of children in the household did not have the expected influence on Internet use. Further investigation into interaction effects of children with income and/or age can possibly explain why this no longer appears to be a significant factor. As for the gender divide, it has done more than vanish. Controlling for social and economic factors, the model found women have a higher propensity to use the Internet. While these results need to be corroborated by further research, the findings suggest that the relative importance of some factors on Internet use appear to be changing over time. This underscores the need for adaptive policy formulation.