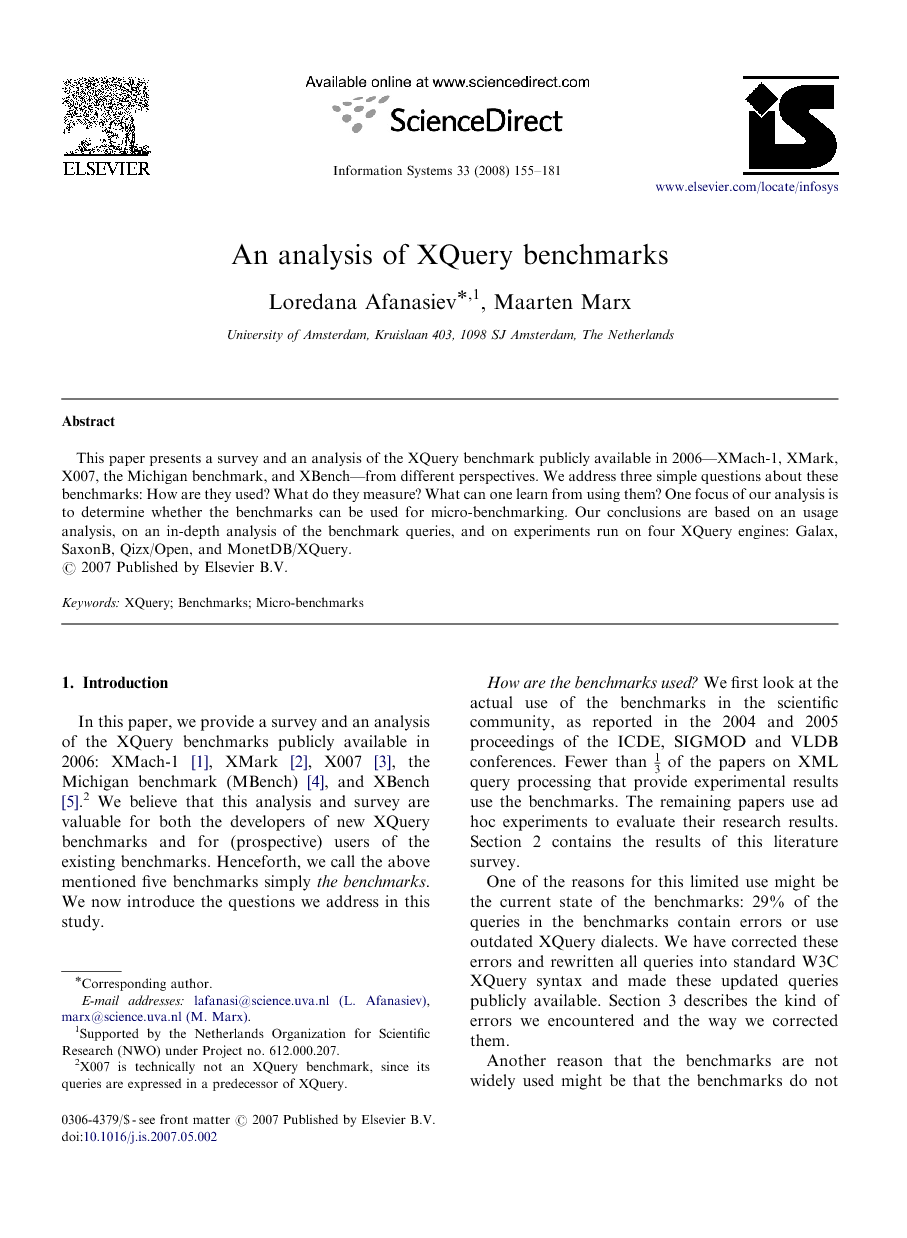 This paper presents a survey and an analysis of the XQuery benchmark publicly available in 2006—XMach-1, XMark, X007, the Michigan benchmark, and XBench—from different perspectives. We address three simple questions about these benchmarks: How are they used? What do they measure? What can one learn from using them? One focus of our analysis is to determine whether the benchmarks can be used for micro-benchmarking. Our conclusions are based on an usage analysis, on an in-depth analysis of the benchmark queries, and on experiments run on four XQuery engines: Galax, SaxonB, Qizx/Open, and MonetDB/XQuery.

In this paper, we provide a survey and an analysis of the XQuery benchmarks publicly available in 2006: XMach-1 [1], XMark [2], X007 [3], the Michigan benchmark (MBench) [4], and XBench [5].2 We believe that this analysis and survey are valuable for both the developers of new XQuery benchmarks and for (prospective) users of the existing benchmarks. Henceforth, we call the above mentioned five benchmarks simply the benchmarks. We now introduce the questions we address in this study. How are the benchmarks used? We first look at the actual use of the benchmarks in the scientific community, as reported in the 2004 and 2005 proceedings of the ICDE, SIGMOD and VLDB conferences. Fewer than View the MathML source13 of the papers on XML query processing that provide experimental results use the benchmarks. The remaining papers use ad hoc experiments to evaluate their research results. Section 2 contains the results of this literature survey. One of the reasons for this limited use might be the current state of the benchmarks: 29% of the queries in the benchmarks contain errors or use outdated XQuery dialects. We have corrected these errors and rewritten all queries into standard W3C XQuery syntax and made these updated queries publicly available. Section 3 describes the kind of errors we encountered and the way we corrected them. Another reason that the benchmarks are not widely used might be that the benchmarks do not provide suitable measures for the intended purpose of the surveyed experiments. Most of the experiments apply micro-benchmarking to test their research results. Micro-benchmarks, as opposed to application benchmarks, are benchmarks that focus on thoroughly testing a particular aspect of the query evaluation process, such as the performance of a query optimization technique on a particular language feature [6]. Out of the five benchmarks only the Michigan benchmark (MBench) was designed for micro-benchmarking [4]. The rest of the benchmarks are application benchmarks. We will investigate in detail the micro-benchmarking properties of the MBench queries in Section 5. What do the benchmarks measure? Our goal is to discover the rationale behind the collection of queries making up a benchmark. Having all queries in the same syntax makes it possible to analyze them systematically. We address this subject with three follow-up questions: (1) How representative of the XQuery language are the benchmark queries?, (2) How concise and focused is the set of queries making up a benchmark?, (3) Are the MBench queries adequate for micro-benchmarking? The first two questions are answered in Section 4; the third, in Section 5. To answer question (1), we look at functional coverage. The goal is to see how much of XQuery functionality is used in comparison to XPath functionality. If we consider only the retrieval capabilities of XQuery, only 16 of the 163 benchmark queries could not be expressed in XPath 2.0. This indicates that the benchmark queries are heavily biased toward testing XPath rather than XQuery. For question (2), we analyze each benchmark as a whole. Running and interpreting each query in a benchmark can be costly. So we analyzed the additional value of each query given the rest of the collection. Roughly, a query has no additional value if there is another query that yields the same execution times on all documents on all XQuery processing engines. Our preliminary results indicate that for most of the benchmarks, a well-chosen subset of its queries give the same information as the entire benchmark. We give a partial answer to question (3) by looking at the MBench queries that test the performance of value-based joins. Based on initial experiments, we identify two different sub-tasks with the evaluation of joins expressed in XQuery: one is to implement an efficient algorithm for value-based joins, and the other is to detect when a query contains a value-based join. XQuery is syntactically a rich language, and joins can be expressed in many different ways. Thus, the second task is not a trivial one. As a follow up work of our investigation and a slight deviation from the main goal of this paper, we extend the set of join queries of MBench to a micro-benchmark testing for the join detection of an engine. We present this micro-benchmark in detail and apply it on four different engines. What can we learn from using these benchmarks? We found that benchmarks are especially suitable for finding the limits of an engine. Though scientific papers rarely give error analyses, an analysis of the errors raised by an engine—syntax, and out-of-memory, and out-of-time—is very useful. Even on our rewritten queries, all the engines except SaxonB raised syntax errors, which indicates their non-compliance to the W3C XQuery standard. We found that the most informative manner of experimenting with and learning from benchmarks is by running them on several engines and comparing the results. Such comparisons are meaningful only if they are executed under the same conditions for each engine; for example, without modifying the syntax of the query when running them on different engines. Section 6 contains an analysis of the errors we found in the benchmark queries and a sample of comparison results. All the experiments in this paper are run with the help of a testing platform, XCheck3[7], on four XQuery engines: Galax [8], SaxonB [9], Qizx/Open [10], and MonetDB/XQuery [11]. To summarize, our main contributions are the following: • Survey of the use of XQuery benchmarks in the scientific literature (Section 2). • Standardization of the current XQuery benchmark queries (Section 3). • Analysis of the benchmark queries: What do they measure? (Section 4) • A micro-benchmark (extending the set of join queries of MBench) testing join detection (Section 5). • An example of a comparative benchmark study on four XQuery engines (Section 6). Our conclusions are in Section 7.

We analyzed the XQuery benchmarks publicly available in 2006 by asking three questions: How are they used? What do they measure? What can we learn from using them? The main conclusion that we draw is that the benchmarks are useful but not totally adequate for evaluating XQuery engines. Concerning the actual usage of the benchmarks, our literature survey shows that, with the exception of XMark, the benchmarks are not used for evaluating XQuery processors. One reason might be that the benchmarks do not comply with the W3C XQuery standard. We found that 29% of the benchmark queries cannot be run on current XQuery engines due to diverse errors, including syntax errors. We fixed these errors and rewrote the queries in a uniform format for all the benchmarks. A second reason might be that many of the papers contain an in-depth analysis of a particular XPath/XQuery processing technique and the benchmarks are not suitable for this. In such cases, specialized micro-benchmarks are more appropriate [6]. Concerning what the benchmarks measure, our analysis of the benchmark queries showed that they test mostly XPath functionality. Note that we were concerned only with retrieving information from the input document(s), and we ignored the XML construction functionality of XQuery. Only 10% of all queries use genuine XQuery properties, which are properties that cannot be expressed in XPath 1.0 or XPath 2.0, such as sorting and user-defined recursive functions. MBench was designed for micro-benchmarking, and we tested if it really can be used for this purpose. We conclude that the set of four queries designed for micro-benchmarking value-based joins is insufficient for drawing sound conclusions. As a result of our investigation, we identified a new subproblem of the XQuery join evaluation problem: detecting the joins expressed in XQuery. We extended the set of four MBench join queries to a micro-benchmark testing join detection. So, what can we learn from using the benchmarks? The benchmarks are an excellent starting point for analyzing an XQuery engine. They can give a general view of its performance and quickly spot bottlenecks. Our experiments show that they are useful for checking the maturity of an engine. However, we found that it is important to check an engine on all benchmarks, instead of only one. The relative performance of engines differs per benchmark. Perhaps this is because each engine is tuned toward a particular scenario captured in a particular benchmark. From this study we can draw the following conclusions and make the following recommendations: • The XQuery community will benefit from new benchmarks—both application benchmarks and micro-benchmarks—that are well-designed, stable, scalable, extensible. Both types of benchmarks should have a good coverage of XQuery functionality. • Application benchmarks could be extensions of XMark and thus benefit from its good properties. Among the good properties of XMark, we note especially the ease of running it on documents of increasing size and the fact that it is often used in the scientific papers and thus serves as a reference for comparison. • The micro-benchmarks should consist of clear, well-described categories of queries, in the spirit of MBench, as advocated in [6]. • Each of these categories should be as small as possible in the number of “information needs” it contains. • Each information need should be formalized as an XQuery query which focuses on the structure of the query and the desired output. When testing for a particular functionality, the use of other features of the language should be avoided. It is also desirable to program the information need in as many different natural ways as possible, using different (every possible) syntactic constructs of XQuery. • The use of standardized benchmarks (or standardized parts of them) is strongly encouraged. Experiments must be well documented and reproducible. A standardized testing platform like XCheck [7] can help in running the benchmarks and making experiments comparable. We hope that this study will facilitate the use of the benchmarks.