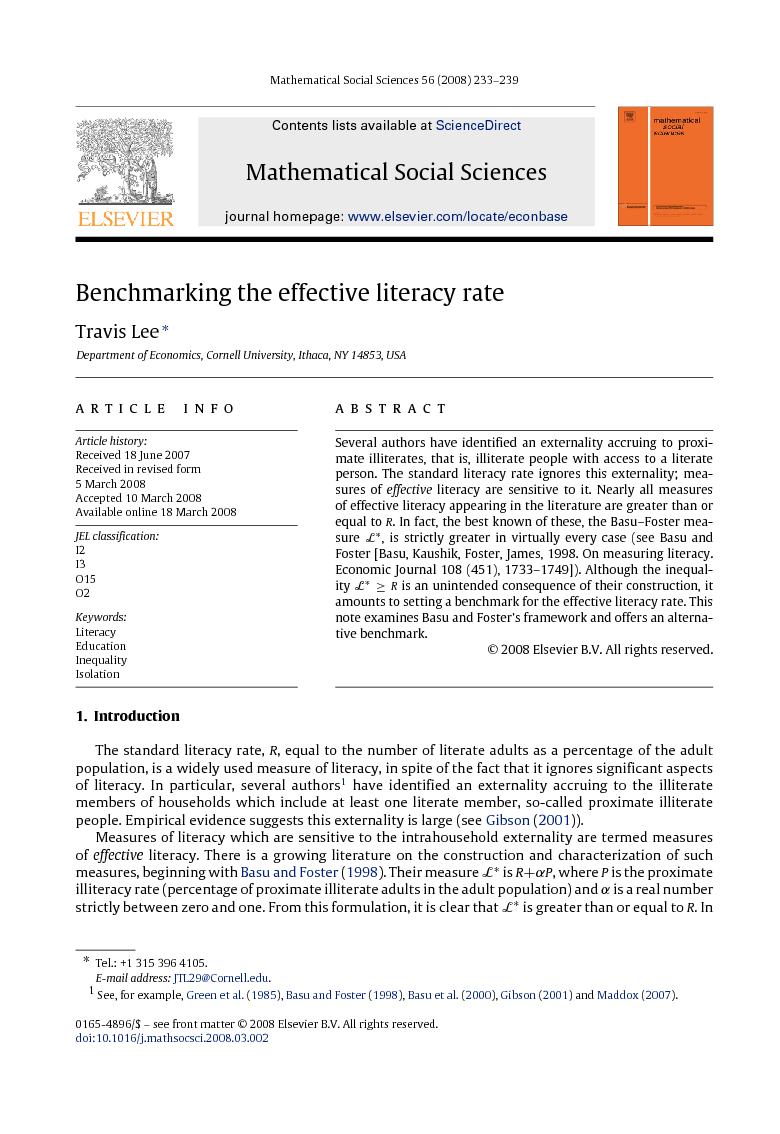 Several authors have identified an externality accruing to proximate illiterates, that is, illiterate people with access to a literate person. The standard literacy rate ignores this externality; measures of effective literacy are sensitive to it. Nearly all measures of effective literacy appearing in the literature are greater than or equal to R. In fact, the best known of these, the Basu–Foster measure L∗, is strictly greater in virtually every case (see Basu and Foster [Basu, Kaushik, Foster, James, 1998. On measuring literacy. Economic Journal 108 (451), 1733–1749]). Although the inequality L∗≥R is an unintended consequence of their construction, it amounts to setting a benchmark for the effective literacy rate. This note examines Basu and Foster’s framework and offers an alternative benchmark.

The standard literacy rate, RR, equal to the number of literate adults as a percentage of the adult population, is a widely used measure of literacy, in spite of the fact that it ignores significant aspects of literacy. In particular, several authors1 have identified an externality accruing to the illiterate members of households which include at least one literate member, so-called proximate illiterate people. Empirical evidence suggests this externality is large (see Gibson (2001)). Measures of literacy which are sensitive to the intrahousehold externality are termed measures of effective literacy. There is a growing literature on the construction and characterization of such measures, beginning with Basu and Foster (1998). Their measure L∗L∗ is R+αPR+αP, where PP is the proximate illiteracy rate (percentage of proximate illiterate adults in the adult population) and αα is a real number strictly between zero and one. From this formulation, it is clear that L∗L∗ is greater than or equal to RR. In fact L∗>RL∗>R for any society which includes a proximate illiterate person. This result is a consequence, not an assumption, of their axiomatic approach (more on this observation below), and yet adopting L∗L∗ to measure literacy amounts to setting a benchmark for the effective literacy rate, namely L∗≥RL∗≥R. Other authors have extended Basu and Foster’s ideas. Dutta (2004), Subramanian (2004), and Valenti (2002) have given measures for which the extent of the externality depends on the rate of literacy within each household. In almost every case, the proposed measure of literacy is bounded below by the standard literacy rate. Additional authors have offered further extensions (see Basu et al. (2001) and Mitra (2002)), but the problem of benchmarking remains unresolved. The inequality L∗≥RL∗≥R amounts to taking a particular view of illiteracy, namely that proximate illiteracy is better than illiteracy, as measured by RR. As detailed below, there are other possible points of view. In particular, one may view proximate illiteracy as the normal state of illiteracy; in other words, one expects an illiterate person to have some access to literacy skills through others. This perspective is best captured by a measure of literacy less than or equal to RR. In fact, the benchmark L∗≥RL∗≥R can lead to perplexing results, even when comparing two simple societies, when one has greater literacy and the other greater proximate illiteracy. These examples suggest L∗L∗ may not adequately measure the trade off between literacy and proximate illiteracy. Improvements can be obtained by considering other measures. Further there is some reason for practical concern, in that L∗L∗ inflates the standard literacy rate, which may lead to complacency on the part of policymakers or distortion of public policy. For these reasons, there has been some interest in obtaining new measures of effective literacy, LL, which are sensitive to the intrahousehold externality but which satisfy the opposite benchmark, that is L≤RL≤R. This note offers a new measure and a set of axioms characterizing it. This measure is L′=(1−αI)RL′=(1−αI)R for 0<α≤10<α≤1, where II is the percentage of isolated illiterate adults (illiterate adults who are not proximate). Subramanian has already derived the measure of literacy (1−I)R(1−I)R from different motivations. Although he does not provide a complete axiomatization, he does give an interesting characterization of (1−I)R(1−I)R as a function of RR and a measure of efficiency loss I/(1−R)I/(1−R) satisfying certain properties. An alternative approach is provided here, and the presence of αα in L′=(1−αI)RL′=(1−αI)R may permit empirical comparisons. Section 2 introduces the Basu–Foster axiomatic framework and their measure L∗L∗. This section serves as a starting point for exploring the consistency of their framework with other possible benchmarks. Section 3 concerns the new measure L′L′, and Theorem 1 characterizes L′L′ via a set of axioms.

This note offers a new measure of literacy which accounts for the positive externality arising from proximate illiteracy and is less than or equal to the standard literacy rate RR. It provides a full axiomatic characterization, making it easier to evaluate the measure’s strengths and weaknesses. The new benchmark L′≤RL′≤R is offered as an alternative to that of Basu and Foster, namely L∗≥RL∗≥R. The simple example of societies View the MathML sourcex and View the MathML sourcey in Section 2, for which View the MathML sourceL∗(x)>L∗(y) but L′(x)<L′(y)L′(x)<L′(y), gives some hint of the relationship between a given benchmark and the judgements made by a measure satisfying it. However this note does not explicate the relationship in terms of axioms. As such, the formal foundations of what leads to these ranking reversals remains an open question. It is hoped that the arguments presented here will contribute to further discussion of and progress in measuring effective literacy.