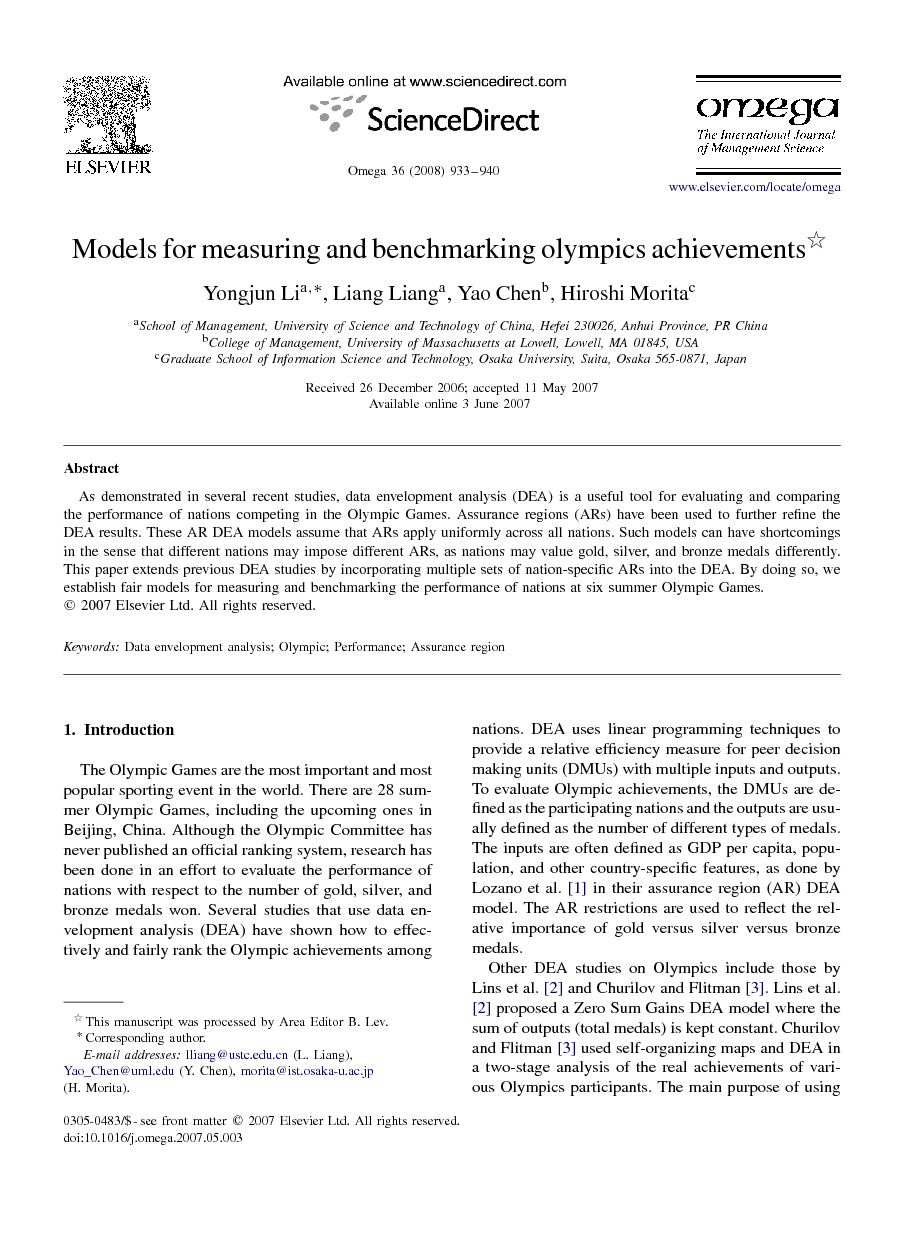 As demonstrated in several recent studies, data envelopment analysis (DEA) is a useful tool for evaluating and comparing the performance of nations competing in the Olympic Games. Assurance regions (ARs) have been used to further refine the DEA results. These AR DEA models assume that ARs apply uniformly across all nations. Such models can have shortcomings in the sense that different nations may impose different ARs, as nations may value gold, silver, and bronze medals differently. This paper extends previous DEA studies by incorporating multiple sets of nation-specific ARs into the DEA. By doing so, we establish fair models for measuring and benchmarking the performance of nations at six summer Olympic Games.

The Olympic Games are the most important and most popular sporting event in the world. There are 28 summer Olympic Games, including the upcoming ones in Beijing, China. Although the Olympic Committee has never published an official ranking system, research has been done in an effort to evaluate the performance of nations with respect to the number of gold, silver, and bronze medals won. Several studies that use data envelopment analysis (DEA) have shown how to effectively and fairly rank the Olympic achievements among nations. DEA uses linear programming techniques to provide a relative efficiency measure for peer decision making units (DMUs) with multiple inputs and outputs. To evaluate Olympic achievements, the DMUs are defined as the participating nations and the outputs are usually defined as the number of different types of medals. The inputs are often defined as GDP per capita, population, and other country-specific features, as done by Lozano et al. [1] in their assurance region (AR) DEA model. The AR restrictions are used to reflect the relative importance of gold versus silver versus bronze medals. Other DEA studies on Olympics include those by Lins et al. [2] and Churilov and Flitman [3]. Lins et al. [2] proposed a Zero Sum Gains DEA model where the sum of outputs (total medals) is kept constant. Churilov and Flitman [3] used self-organizing maps and DEA in a two-stage analysis of the real achievements of various Olympics participants. The main purpose of using self-organizing maps is to group countries into clusters that have similar profiles. A single set of AR constraints is used in the DEA. Existing DEA studies recognize the importance of incorporating AR constraints, to reflect the relative valuation of different medals. However, these studies all assume that the same set of AR constraints is universally applicable across all nations. This assumption may not be tenable, as different nations may impose different valuations of the medal types. Nigeria, for example, with a GDP of $593 per capita and a population of 129 million in 2004, is defined as a low income country by the World Bank, but still won two bronze medals in the 2004 Olympic Games held in Athens, Greece. In contrast, Japan, a well-developed country with a GDP of $36,500 per capita and a population of 127 million in 2004, won 16 gold, 9 silver, and 12 bronze medals. The huge gap between the medals won by the two countries may be due to their differing economic status, as reflected by the per capita GDP. In battling with starvation and poverty, it is hard for the Nigerians to allocate huge expenses to sporting infrastructure and equipment. Indeed, participating in the Athens Olympics was in itself a great success for the Nigerians. Nigeria might care only about the total number of medals won, while Japan may place more value on the number of gold medals. In this case, one would impose two different sets of AR restrictions on the relative importance of gold, silver, and bronze medals. For example, for Nigeria, a gold medal would be at least one time, but not more than two times as important as a silver medal, and for Japan, a gold medal would be at least three times and not more than five times as important as a silver medal. Cook and Zhu [4] point out that the situation described above may be related to the homogeneity of DMUs. They elaborate the AR DEA model, and develop a context-dependent AR DEA (CAR-DEA) model that allows multiple sets of AR restrictions to be incorporated into the DEA. This paper applies the CRA-DEA of Cook and Zhu [4] to six summer Olympic Games, held from 1984 to 2004. Using a system of classification defined by the World Bank, participating nations are grouped into four economic classes: low income, lower middle income, upper middle income, and high income. Low-income and middle-income economies are sometimes referred to as developing economies. This classification is used to reflect the argument that Olympic achievement correlates to the wealth of participating countries. As noted in Bernard and Busse [5], income per capita is a key indicator because wealthier countries are more likely to have organizations with the resources required to properly train and develop Olympic medal contenders. The rest of this study is organized as follows. Section 2 presents the CAR-DEA model. Section 3 reports the results and findings for the six Olympic Games from 1984 to 2004. Section 4 presents our conclusions.

Conventional DEA models of performance in the Olympic Games do not take into consideration the variability in the economic status of participating nations. In this paper, a context-dependent AR DEA model is used to analyze the achievements of nations during six summer Olympic Games. Multiple sets of AR restrictions can be incorporated into the DEA. As a result, a fair comparison of different nations is achieved. It is shown that by scaling up or down the outputs, multiple AR restrictions of different groups of nations can be transformed into a common set of AR restriction that is applicable to all nations. Further studies can use the recent approaches of Seiford and Zhu [9] and Cook, Seiford and Zhu [10] to benchmark the nations.