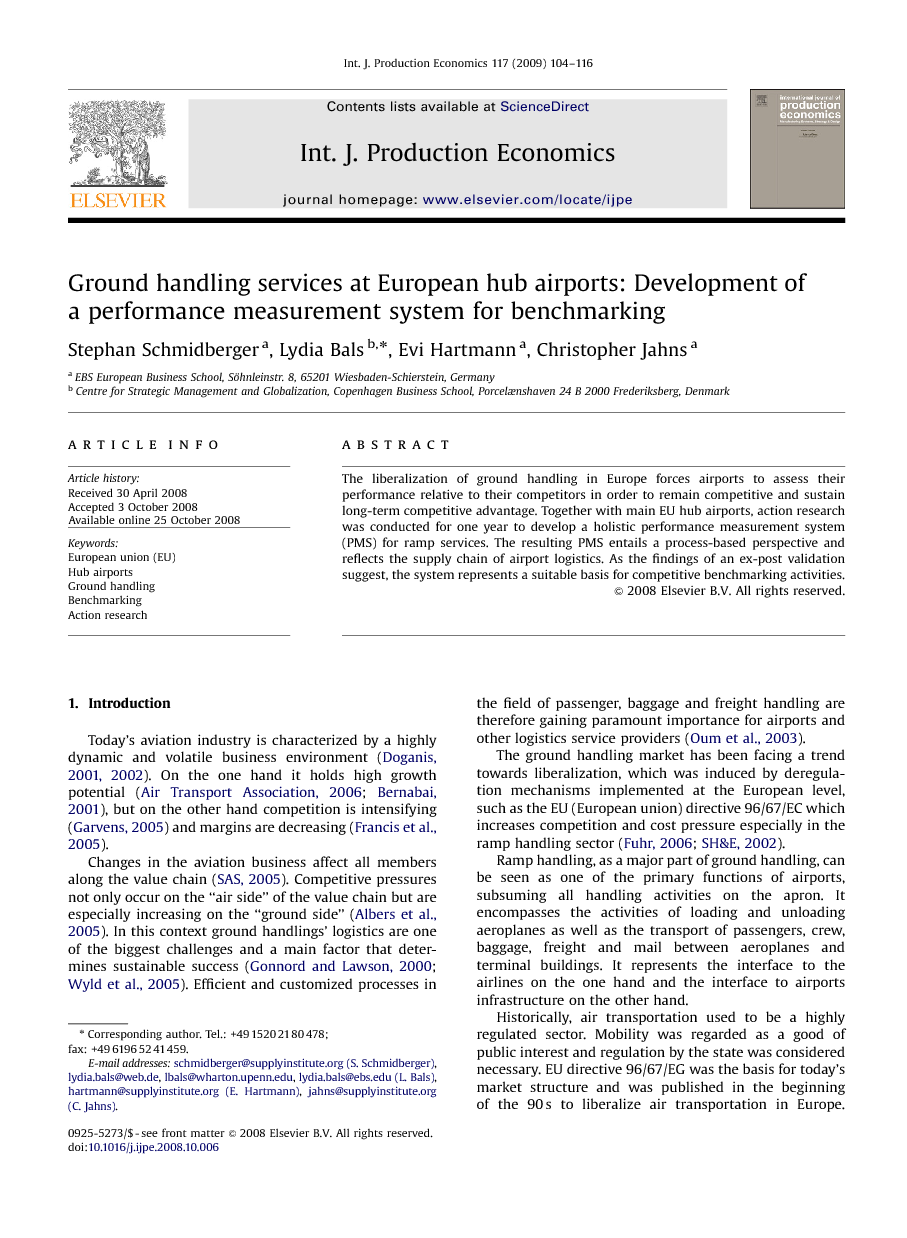 The liberalization of ground handling in Europe forces airports to assess their performance relative to their competitors in order to remain competitive and sustain long-term competitive advantage. Together with main EU hub airports, action research was conducted for one year to develop a holistic performance measurement system (PMS) for ramp services. The resulting PMS entails a process-based perspective and reflects the supply chain of airport logistics. As the findings of an ex-post validation suggest, the system represents a suitable basis for competitive benchmarking activities.

Today's aviation industry is characterized by a highly dynamic and volatile business environment (Doganis, 2001 and Doganis, 2002). On the one hand it holds high growth potential (Air Transport Association, 2006; Bernabai, 2001), but on the other hand competition is intensifying (Garvens, 2005) and margins are decreasing (Francis et al., 2005). Changes in the aviation business affect all members along the value chain (SAS, 2005). Competitive pressures not only occur on the “air side” of the value chain but are especially increasing on the “ground side” (Albers et al., 2005). In this context ground handlings’ logistics are one of the biggest challenges and a main factor that determines sustainable success (Gonnord and Lawson, 2000; Wyld et al., 2005). Efficient and customized processes in the field of passenger, baggage and freight handling are therefore gaining paramount importance for airports and other logistics service providers (Oum et al., 2003). The ground handling market has been facing a trend towards liberalization, which was induced by deregulation mechanisms implemented at the European level, such as the EU (European union) directive 96/67/EC which increases competition and cost pressure especially in the ramp handling sector (Fuhr, 2006; SH&E, 2002). Ramp handling, as a major part of ground handling, can be seen as one of the primary functions of airports, subsuming all handling activities on the apron. It encompasses the activities of loading and unloading aeroplanes as well as the transport of passengers, crew, baggage, freight and mail between aeroplanes and terminal buildings. It represents the interface to the airlines on the one hand and the interface to airports infrastructure on the other hand. Historically, air transportation used to be a highly regulated sector. Mobility was regarded as a good of public interest and regulation by the state was considered necessary. EU directive 96/67/EG was the basis for today's market structure and was published in the beginning of the 90 s to liberalize air transportation in Europe. The main goal was to induce a step-wise liberalization and to achieve a unified regulation of ground handling, particularly affecting the air side, so-called ramp handling. By opening the market a further aim was to reduce operating costs of air transportation and improving the quality of aircraft handling. Today the EU directive determines the number of ground handlers, which have to be enabled to enter the market (Soames, 1997). It makes limiting the number of providers only possible in exceptional cases. Moreover, changes in line with the latest discussion about a revision of the EU directive (European Commission, 2003) will further enforce liberalization of the ramp handling market. Due to this increased competitive pressure, ground handlers and in particular ramp handlers will also have to rethink their strategies and structures as well as their scope of work (Müller et al., 2005) in order to maintain or gain long-term competitive advantage. As seen in other liberalized markets, today's ramp handling organizations need to become more competitive, market-oriented and customer-driven (Chan et al., 2006). Therefore, it is particularly important for them to improve their ability to assess their own performance relative to that of their competitors (Oum et al., 2003). To achieve this, performance measurement can be seen as an adequate approach that permits a holistic analysis of their efficiency and effectiveness (Kennerley and Neely, 2002; Neely et al., 1995). As a sole usage of a performance measurement system (PMS) would not be “[…] able to answer one of the most fundamental questions of all—what are our competitors doing?” (Neely et al., 1995), benchmarking is considered as an appropriate tool that should be combined with performance measurement for the identification of best practice solutions among the industry (Francis et al., 2002). As such, the performance gaps provide an initial basis for targeting radical changes, as well as continuous improvement, both aimed at providing a long term competitive advantage. Although benchmarking has been criticized to be limited Gregory (1993) and mainly provides information that helps to get on a par with other companies, it is an important method to take the first step in strategically positioning the company, identify the relative competitive position of a company (McIvor, 2003) and lay the foundations for a sustainable competitive advantage. Within the scope of this article, performance measurement and benchmarking are seen as integrative approaches, whereby the PMS acts as the source of information for benchmarking activities. Nevertheless, such a system has not yet been developed for ramp handling businesses. Therefore, the research objectives of this article are twofold: The first objective is to develop an adequate PMS for analyzing the effectiveness and efficiency of ramp handling businesses. The second objective is to test its practical applicability for performing a benchmarking. The next two sections provide a background on performance measurement, considering also the context of airport logistics. Based on this background, a conceptual PMS is presented. Then the action research methodology followed here is explained. The conceptually developed PMS was applied in a benchmarking study with several ramp handling organizations of EU hub airports. The article closes with a summary of the main findings, suggestions for further research and managerial implications.

Noting the growing relevance of this topic in practice, and addressing a general research gap in airport logistics, we set out with the objectives of developing and applying a PMS for ramp handling businesses. Based on a conceptual model of a phase-based framework of performance measurement, action research was conducted together with EU hub airports in order to determine how a PMS should be designed to ensure a holistic basis for benchmarking ramp services (summarized in Fig. 1). This PMS combines BSC-derived perspectives with process-oriented dimensions, adapting it to the context of logistics services. One of the goals of the airports performing the benchmarking activities was to increase competitiveness. While it could be argued that participating in such a study potentially erodes their competitive advantages due to complete transparency of their individual strengths and weaknesses, this was actually not a major issue here. A reason for this is especially seen in the fact that all of them are facing increasing competition by new market entrants, which was perceived a much more major threat than sharing information with the other participants of the benchmarking. 7.1. Limitations and further research One weakness of the study is its generalizability. Nevertheless, since the three action cases were drawn from the full forward integrated EU hub airport sample of six, the generalizability to these may be relatively good, especially as they operate in a similar legal environment. With regard to the European context, the particular situation of recent liberalization of some of the airport processes has created a rather special environment. An interesting aspect for further research here is therefore to observe how the EU directive will be adapted in the future, because parts of the airport infrastructure still show monopolistic characteristics. For generalizing to hub airports beyond the EU, the legal context differences have to be analyzed carefully. The findings generated are specific for the context of hub airports and their special requirements, but the basic model of the PMS should be easily transferable to O&D (Origin & Destination) ground handling processes. Since O&D airports represent the main share of existing airports and competitive pressures for optimizing these processes are high for them either, we deem further empirical research valuable for getting more general insights, and extending the insights for other airport types. Further investigations would enrich the knowledge of the scientific community on airport logistics. Concerning methodology, related investigations with in-depth case studies in this field are advisable. Further validation of the PMS for ramp services could be achieved by implementing the system in other real-world settings. Apart from qualitative approaches, future studies could also quantitatively investigate the cause-and-effect relationships developed in the presented system. A regression analysis may be performed and stimulate findings based on a broader sample. Further, by regular replication of the benchmarking based on the developed PMS, findings of a more longitudinal nature could be generated. Another point is that although the scope of vertical integration has been treated from the perspective of airlines to some extend (Fuhr, 2006; Fuhr and Beckers, 2006), a detailed scientific analysis of vertical integration specifically concerning ramp handling from the airports’ perspective is still missing. Regarding the specific gaps identified in this study and the insights of the later validation of the system, it was observed that the cases started reconsidering the boundaries of their firms, and outsourcing became a topic of increased discussion at these airports. Nevertheless, this was just in its beginning and would be interesting for further research to follow up and see how this is further approached and eventually implemented. 7.2. Managerial implications The presented model has proven potential for structuring relevant logistic service providers’ performance dimensions and providing actionable results. During development of the system, its practical relevance was continuously ensured. Also, the ex post validation has shown that after using the PMS radical and continuous improvement processes have been induced. The insights gathered here are therefore considered potential input for all types of ramp handling process businesses—regardless of whether it is self-handling, airports services, or third party logistics providers who perform these activities. Concerning the specific results of the benchmarking, the performance analysis showed that the greatest disparities between the EU hub airports concerned the net availability of employees (mainly as a result of a high number of sick days), personnel structure, overhead structure, performance quality and process quality. Regarding the overall practical implications of these benchmarking results, outsourcing was discussed by the cases studied here. This is also in line with previous outsourcing research, which suggests that outsourcing can help increasing cost efficiency, gathering new knowledge for process optimization, reducing overheads, increasing flexibility of employee deployment as well as improving process quality (Fan, 2000; Kakabadse and Kakabadse, 2002; Quinn and Hilmer, 1994; Willcocks et al., 1995). However, to decide on the make-or-buy question, a more detailed focus on capabilities and the core competencies of the individual airport have to be considered in addition (McIvor, 2003; McIvor et al., 1997). Taking into account that these rather fundamental considerations were a result of performing the benchmarking, some concluding notions should be made. First, in order to achieve detailed results as a basis for further actions, a thorough picture of performance in the setting of logistics clearly involved a process-oriented perspective. Second, the cases here demonstrated that no company is an island, and that it appears wisely to form a benchmarking network, even with potential competitors, and identify weaknesses jointly, standing shoulder to shoulder against a common threat.