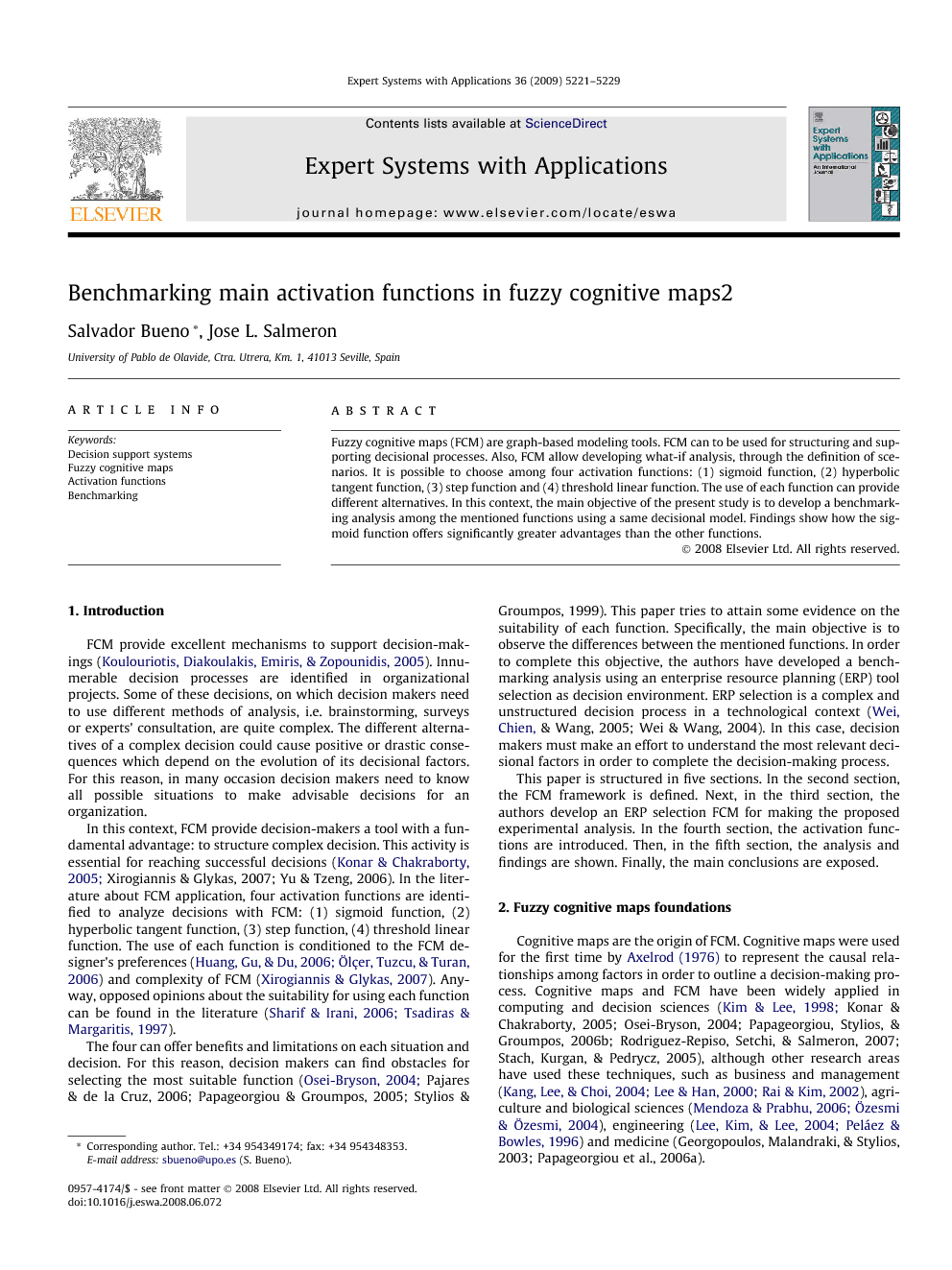 Fuzzy cognitive maps (FCM) are graph-based modeling tools. FCM can to be used for structuring and supporting decisional processes. Also, FCM allow developing what-if analysis, through the definition of scenarios. It is possible to choose among four activation functions: (1) sigmoid function, (2) hyperbolic tangent function, (3) step function and (4) threshold linear function. The use of each function can provide different alternatives. In this context, the main objective of the present study is to develop a benchmarking analysis among the mentioned functions using a same decisional model. Findings show how the sigmoid function offers significantly greater advantages than the other functions.

FCM provide excellent mechanisms to support decision-makings (Koulouriotis, Diakoulakis, Emiris, & Zopounidis, 2005). Innumerable decision processes are identified in organizational projects. Some of these decisions, on which decision makers need to use different methods of analysis, i.e. brainstorming, surveys or experts’ consultation, are quite complex. The different alternatives of a complex decision could cause positive or drastic consequences which depend on the evolution of its decisional factors. For this reason, in many occasion decision makers need to know all possible situations to make advisable decisions for an organization. In this context, FCM provide decision-makers a tool with a fundamental advantage: to structure complex decision. This activity is essential for reaching successful decisions (Konar and Chakraborty, 2005, Xirogiannis and Glykas, 2007 and Yu and Tzeng, 2006). In the literature about FCM application, four activation functions are identified to analyze decisions with FCM: (1) sigmoid function, (2) hyperbolic tangent function, (3) step function, (4) threshold linear function. The use of each function is conditioned to the FCM designer’s preferences (Huang et al., 2006 and Ölçer et al., 2006) and complexity of FCM (Xirogiannis & Glykas, 2007). Anyway, opposed opinions about the suitability for using each function can be found in the literature (Sharif and Irani, 2006 and Tsadiras and Margaritis, 1997). The four can offer benefits and limitations on each situation and decision. For this reason, decision makers can find obstacles for selecting the most suitable function (Osei-Bryson, 2004, Pajares and de la Cruz, 2006, Papageorgiou and Groumpos, 2005 and Stylios and Groumpos, 1999). This paper tries to attain some evidence on the suitability of each function. Specifically, the main objective is to observe the differences between the mentioned functions. In order to complete this objective, the authors have developed a benchmarking analysis using an enterprise resource planning (ERP) tool selection as decision environment. ERP selection is a complex and unstructured decision process in a technological context (Wei et al., 2005 and Wei and Wang, 2004). In this case, decision makers must make an effort to understand the most relevant decisional factors in order to complete the decision-making process. This paper is structured in five sections. In the second section, the FCM framework is defined. Next, in the third section, the authors develop an ERP selection FCM for making the proposed experimental analysis. In the fourth section, the activation functions are introduced. Then, in the fifth section, the analysis and findings are shown. Finally, the main conclusions are exposed.

The findings reached in this study have allowed the obtaining of some conclusions related to the FCM technique and its capacity to define suspicious events. On the other hand, although FCM can structure generic decision-making, we have observed how a FCM can be used to make what-if analysis. In this context, FCM, through the sigmoid function, a useful tool for decisional processes make available to decision-makers. Also, FCM are relevant techniques to make decisions about future implications, especially when what-if analysis is needed. Generally, the sigmoid function allows the obtaining of scenarios which tend to reach scenarios far from the extreme values (0 or 1). Normally, the stable vector is made up of components that define middle intensities and, on a few occasions, if takes extreme values. However, the hyperbolic tangent function, the step function and the threshold linear function reached the same scenario. The findings obtained show that these three functions tend to provide a similar scenario, but the way of reaching the stability and the number of interactions is different. In this context, the sigmoid function can be considered an excellent decision support tool within any scope. In a complex decisional environment the sigmoid function offers the possibility of attaining easily comparative analyses between scenarios that define decisional situations. These scenarios allow the obtaining of a future vision of the more suitable alternatives, and, therefore, the reaching of successful decisions. Therefore, the sigmoid function can define decisional scenarios for decision-makers of any decisional environment. Nevertheless, it has some disadvantages if it is compared with the other functions analyzed. First, decision-makers need an extensive number of interactions with the sigmoid function to reach the stable scenario, whereas with the other functions few interactions are needed. According to the obtained findings, the sigmoid function requires the making of the quadruple of hyperbolic tangent function interactions, and the triple of step and threshold linear function interactions. Second, the sigmoid function defines vectors (scenarios) with middle weights. The developed analysis shows how the hyperbolic tangent function, step function and threshold linear function tend to simplify the vectors reached in each interaction. This situation is observed with greater clearness when the step function and the threshold linear function are applied. In spite of these conclusions, we have observed the presence of an important randomness level in the application of the four analyzed functions. In the case of the sigmoid and hyperbolic tangent functions, decision makers must select the λ value in each decisional process. The λ value depends widely on the decision-makers’ preferences and the decision complexity. In this context, the number of interactions and the final scenario of a vector stability process will be conditioned by the λ value used. Also, we can extend these same conclusions to the step and threshold linear functions on which it is necessary to define a T value. Finally, some limitations have been identified based on the chosen activation method chosen by an FCM user. In this context, each organization can have different preferences about a certain decision. This aspect can be reflected in the activation function selection.