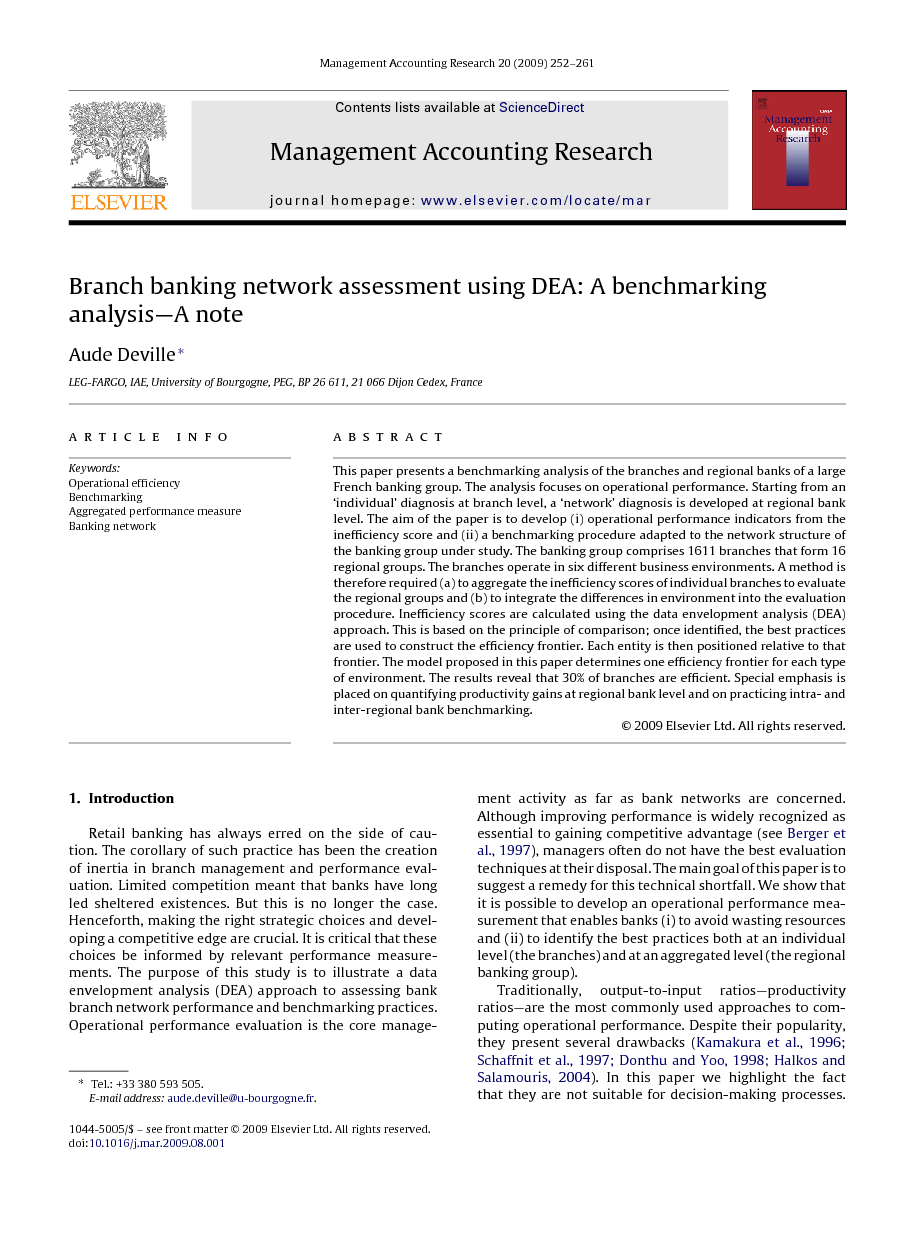 This paper presents a benchmarking analysis of the branches and regional banks of a large French banking group. The analysis focuses on operational performance. Starting from an ‘individual’ diagnosis at branch level, a ‘network’ diagnosis is developed at regional bank level. The aim of the paper is to develop (i) operational performance indicators from the inefficiency score and (ii) a benchmarking procedure adapted to the network structure of the banking group under study. The banking group comprises 1611 branches that form 16 regional groups. The branches operate in six different business environments. A method is therefore required (a) to aggregate the inefficiency scores of individual branches to evaluate the regional groups and (b) to integrate the differences in environment into the evaluation procedure. Inefficiency scores are calculated using the data envelopment analysis (DEA) approach. This is based on the principle of comparison; once identified, the best practices are used to construct the efficiency frontier. Each entity is then positioned relative to that frontier. The model proposed in this paper determines one efficiency frontier for each type of environment. The results reveal that 30% of branches are efficient. Special emphasis is placed on quantifying productivity gains at regional bank level and on practicing intra- and inter-regional bank benchmarking.

Retail banking has always erred on the side of caution. The corollary of such practice has been the creation of inertia in branch management and performance evaluation. Limited competition meant that banks have long led sheltered existences. But this is no longer the case. Henceforth, making the right strategic choices and developing a competitive edge are crucial. It is critical that these choices be informed by relevant performance measurements. The purpose of this study is to illustrate a data envelopment analysis (DEA) approach to assessing bank branch network performance and benchmarking practices. Operational performance evaluation is the core management activity as far as bank networks are concerned. Although improving performance is widely recognized as essential to gaining competitive advantage (see Berger et al., 1997), managers often do not have the best evaluation techniques at their disposal. The main goal of this paper is to suggest a remedy for this technical shortfall. We show that it is possible to develop an operational performance measurement that enables banks (i) to avoid wasting resources and (ii) to identify the best practices both at an individual level (the branches) and at an aggregated level (the regional banking group). Traditionally, output-to-input ratios—productivity ratios—are the most commonly used approaches to computing operational performance. Despite their popularity, they present several drawbacks (Kamakura et al., 1996, Schaffnit et al., 1997, Donthu and Yoo, 1998 and Halkos and Salamouris, 2004). In this paper we highlight the fact that they are not suitable for decision-making processes. How can managers rate branches by their productivity if productivity itself is evaluated by a multitude of partial productivity ratios?1 The production process of a given branch involves multiple inputs and outputs occurring simultaneously. The DEA approach allows us to evaluate the operational performance of this branch and provides a single all-round index encompassing all facets of branch activity. This approach is especially well adapted to benchmarking because it measures performance relative to the best practices observed. The operational performance indicator laid out in this paper is a technical inefficiency score. This study has two closely related objectives. The first is to compute the technical inefficiency of branches in terms of their ability to avoid wasting resources allocated by regional bank management. Here, a fair2 evaluation procedure is adopted; it allows us to neutralize the uncontrollable effects of location on branch activity ( Charnes et al., 1981, Banker and Morey, 1986, Athanassopoulos, 1998 and Zenios et al., 1999). The second objective is to calculate the productivity gains at regional bank level. This is achieved by aggregating the technical inefficiency score using a directional measure ( Chambers et al., 1996, Briec, 1997, Färe and Grosskopf, 2000 and Briec et al., 2003). More precisely, we develop an operational performance measure for individual branches. This is typical of many DEA studies carried out both inside and outside the financial services sector (Lovell and Pastor, 1997). However, we then use this measure to evaluate the operational performance of regional banking networks. This is a new development because we suggest a way of calculating an aggregate inefficiency score using an output directional measure of technical inefficiency rather than the radial measure most widely used today. Our contribution through this paper is to provide a means of measuring the performance of different levels of a banking network on the basis of operational criteria. The results of this research enable both individual and aggregate benchmarking analysis to be implemented. Specifically, two outcomes can be seen in anecdotal evidence of the managerial consequences of inefficiency scoring within the banking group. First, two of what were identified as the poorest-performing regional banking groups modified the way branch-level performance targets were determined: individual inefficiency scores enabled ‘realistic’ targets to be set (deemed realistic because other branches faced with similar trade environments had reached these same targets). These new performance measurements gave fresh motivation to branch managers and technical inefficiency scoring prompted new managerial initiatives because such scores were widely accepted and validated. Second, we can spot certain novel practices from among the best branch practices observed. Some branch managers innovated in their way of selling or using banking/financial products, but regional bank managers often remained unaware of such good practices. Thanks to efficiency diagnostics, best practices could be identified, developed and applied at all levels of the organization. The paper is organized as follows. Section 2 introduces the linear program developed to evaluate the technical inefficiency of the 1611 branches and 16 networks of one unnamed French bank. Section 3 discusses some already published DEA studies and describes the bank branch production process. Section 4 lays out our empirical findings and proposes both individual and aggregate benchmarking analyses. Finally, Section 5 presents our concluding remarks.

In this paper we apply DEA to a French banking group by using an inefficiency score. Our analysis generates two sets of findings. The first relates to the ability of branches to avoid wasting the resources allocated for a given environment; the second pertains to the managerial perspective of an intra- and inter-regional bank benchmarking analysis. We discuss the methodological and managerial interests of using a directional measure when assessing a distribution network rather than the radial measure traditionally employed. The ‘individual’ diagnosis makes it possible to assess the effort required by a given inefficient branch in terms of volume of sales of banking and non-banking products in light of its location and allocation of resources. The ‘network’ diagnosis makes it possible to compare the different regional banks in order to study the concentration of technical inefficiency within a given network and to assess its potential productivity gains. The latter elements are of major interest to management, providing them with a directional measure of technical inefficiency. Benchmarking remains a powerful decision-making tool. It is a complex practice to implement, particularly within a retail network, since it is based on the measurement of performance with a view to identifying best practices, assessing and comparing units fairly, and classifying them. We show that the DEA approach is helpful in developing an indicator for overall productivity and that it meets the requirements for implementing rigorous benchmarking. This indicator deserves its place within any balanced scorecard or benchmarking analysis. When properly used, management tools help to ensure the success of an organization and today, although often overlooked, management control occupies a key role as a vector of competitiveness. However, success in this role depends on how well the tools it develops are adapted to the organization, to its strategy and to the distribution of decision-making powers. Critical to this success is the fact that a firm's employees—those directly impacted by such control tools—will more readily give their support to a properly designed control system.