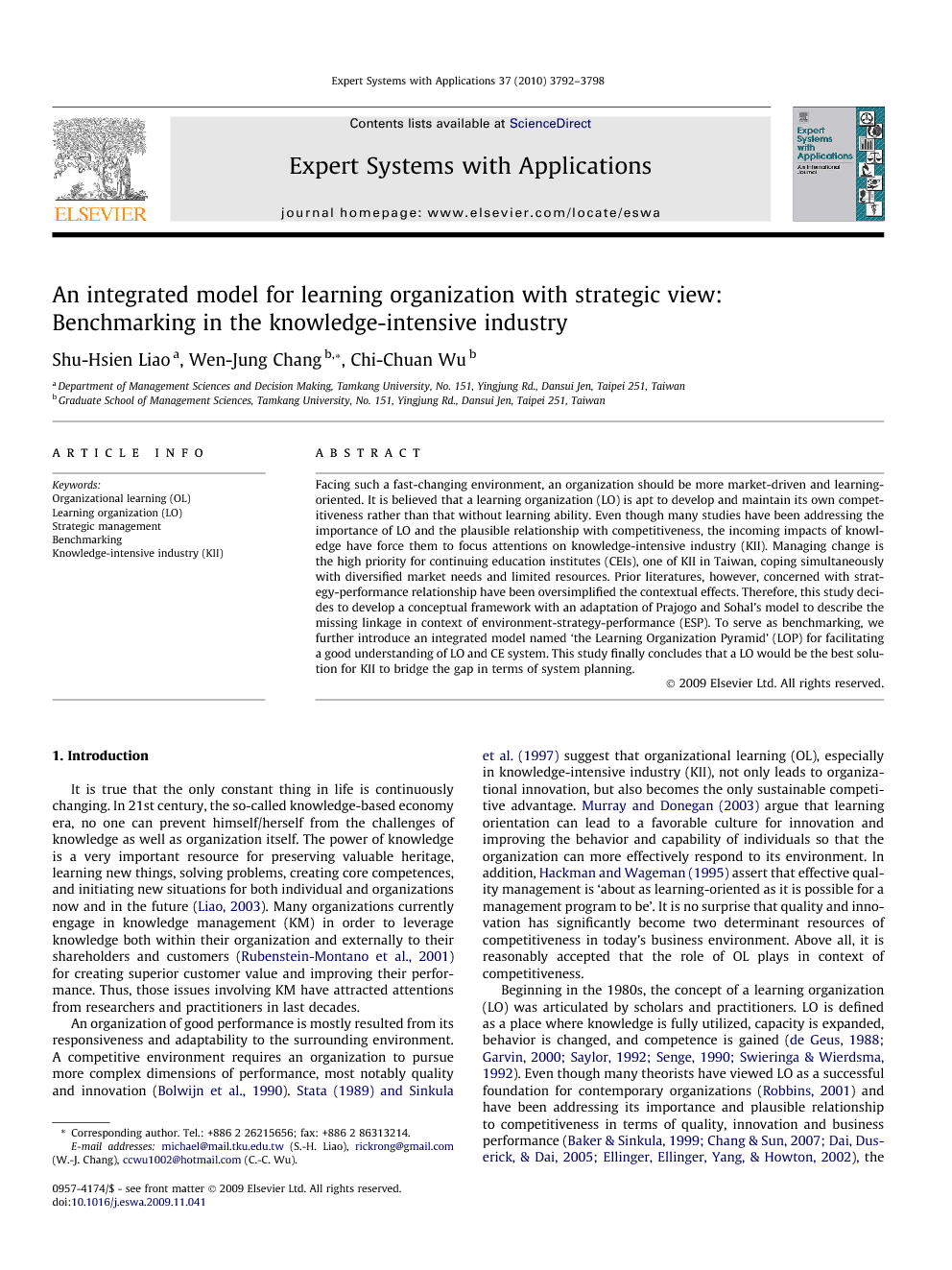 Facing such a fast-changing environment, an organization should be more market-driven and learning-oriented. It is believed that a learning organization (LO) is apt to develop and maintain its own competitiveness rather than that without learning ability. Even though many studies have been addressing the importance of LO and the plausible relationship with competitiveness, the incoming impacts of knowledge have force them to focus attentions on knowledge-intensive industry (KII). Managing change is the high priority for continuing education institutes (CEIs), one of KII in Taiwan, coping simultaneously with diversified market needs and limited resources. Prior literatures, however, concerned with strategy-performance relationship have been oversimplified the contextual effects. Therefore, this study decides to develop a conceptual framework with an adaptation of Prajogo and Sohal’s model to describe the missing linkage in context of environment-strategy-performance (ESP). To serve as benchmarking, we further introduce an integrated model named ‘the Learning Organization Pyramid’ (LOP) for facilitating a good understanding of LO and CE system. This study finally concludes that a LO would be the best solution for KII to bridge the gap in terms of system planning.

It is true that the only constant thing in life is continuously changing. In 21st century, the so-called knowledge-based economy era, no one can prevent himself/herself from the challenges of knowledge as well as organization itself. The power of knowledge is a very important resource for preserving valuable heritage, learning new things, solving problems, creating core competences, and initiating new situations for both individual and organizations now and in the future (Liao, 2003). Many organizations currently engage in knowledge management (KM) in order to leverage knowledge both within their organization and externally to their shareholders and customers (Rubenstein-Montano et al., 2001) for creating superior customer value and improving their performance. Thus, those issues involving KM have attracted attentions from researchers and practitioners in last decades. An organization of good performance is mostly resulted from its responsiveness and adaptability to the surrounding environment. A competitive environment requires an organization to pursue more complex dimensions of performance, most notably quality and innovation (Bolwijn et al., 1990). Stata, 1989 and Sinkula et al., 1997 suggest that organizational learning (OL), especially in knowledge-intensive industry (KII), not only leads to organizational innovation, but also becomes the only sustainable competitive advantage. Murray and Donegan (2003) argue that learning orientation can lead to a favorable culture for innovation and improving the behavior and capability of individuals so that the organization can more effectively respond to its environment. In addition, Hackman and Wageman (1995) assert that effective quality management is ‘about as learning-oriented as it is possible for a management program to be’. It is no surprise that quality and innovation has significantly become two determinant resources of competitiveness in today’s business environment. Above all, it is reasonably accepted that the role of OL plays in context of competitiveness. Beginning in the 1980s, the concept of a learning organization (LO) was articulated by scholars and practitioners. LO is defined as a place where knowledge is fully utilized, capacity is expanded, behavior is changed, and competence is gained (de Geus, 1988, Garvin, 2000, Saylor, 1992, Senge, 1990 and Swieringa and Wierdsma, 1992). Even though many theorists have viewed LO as a successful foundation for contemporary organizations (Robbins, 2001) and have been addressing its importance and plausible relationship to competitiveness in terms of quality, innovation and business performance (Baker and Sinkula, 1999, Chang and Sun, 2007, Dai et al., 2005 and Ellinger et al., 2002), the large knowledge input, short product life cycles, high demand for customized products, and great quantity of production value (Liao, Fei, & Chen, 2007) have forced these researchers and practitioners to focus attention on KII. Because of the popularization of life-long learning, the life-long education has dominated the world education systems for these decades. Continuing education (CE), the major force of life-long education, provides appropriate opportunities for those who cannot finish their professional or normal education in the past in contrast to the traditional higher education (e.g., universities/colleges). Since 1998, the Ministry of Education (MOE) has been promoting the ‘Recurrent Education’ and ‘Life-long Education’ in Taiwan; the number of continuing education institutes (CEIs) has been on the rise around the island. Thus, managing change is the high priority for CEIs coping simultaneously with diversified market needs and limited resources. These changes, as a result, force CEIs to make attempts to retarget their market and customers and to redesign their operating system. Just like any business, KII is subject to fast-changing environment too. Prior literatures, however, concerned with strategy-performance relationship rarely focus on CE and have been oversimplified the contextual effects. From strategic management perspective, we suggest that there probably exists a missing linkage somewhere in the so-called ‘environment-strategy-performance’ (ESP) chain. To explore the potential gap within the ESP context and further to search for the best solution to bridge this gap, this paper, therefore, proposes a new conceptual model named ‘ESCAPE’, which is based on the concept of Prajogo and Sohal (2001) with some modifications. To date, there are lots of CEIs in Taiwan, including universities and colleges, institutions of vactional training, community colleges, life-long education and adult education institutes and corporate consulting companies and so on. In terms of market concentration, universities and colleges are supposed to be the representative of CE for following analyses. Our case institute, the School of Continuing Education of Chinese Culture University (SCE), is the largest CEI in Taiwan and it would be a good example of paradigm transfer for its flexible strategies and innovative initiatives. This study makes three contributions to the extant literature. First, the survey on CEIs will help researchers and practitioners to broaden and refresh their views with this emerging industry in knowledge economy. Next, a graphical representation is used for clearly depicting the causality of ESP chain. Finally, we also suggest that the key role of OL plays in the missing linkage between organizational culture and organization’s capabilities or competences.

Facing such a turbulent and uncertain environment today, a CEI itself should develop its capabilities and core competences to outpace its rivals in order to create superior customer value and improve financial performance (e.g., profitability, market share and growth rate). In this respect, CEIs should be equipped with the capability of market-driven and learning-focused. This statement is similar with the findings of Slater and Narver, 1995 and Sinkula, 1994. This study suggests that a LO would be the best solution for KII (e.g., CEIs) to bridge the gap. Thus, if CEIs want to succeed in ever-changing marketplace today, they should learn how to satisfy various levels of customer’s needs and how to design a feasible operating system so as to embrace the innovation performance, the operating efficiency and effectiveness, and sustained competitive advantage.