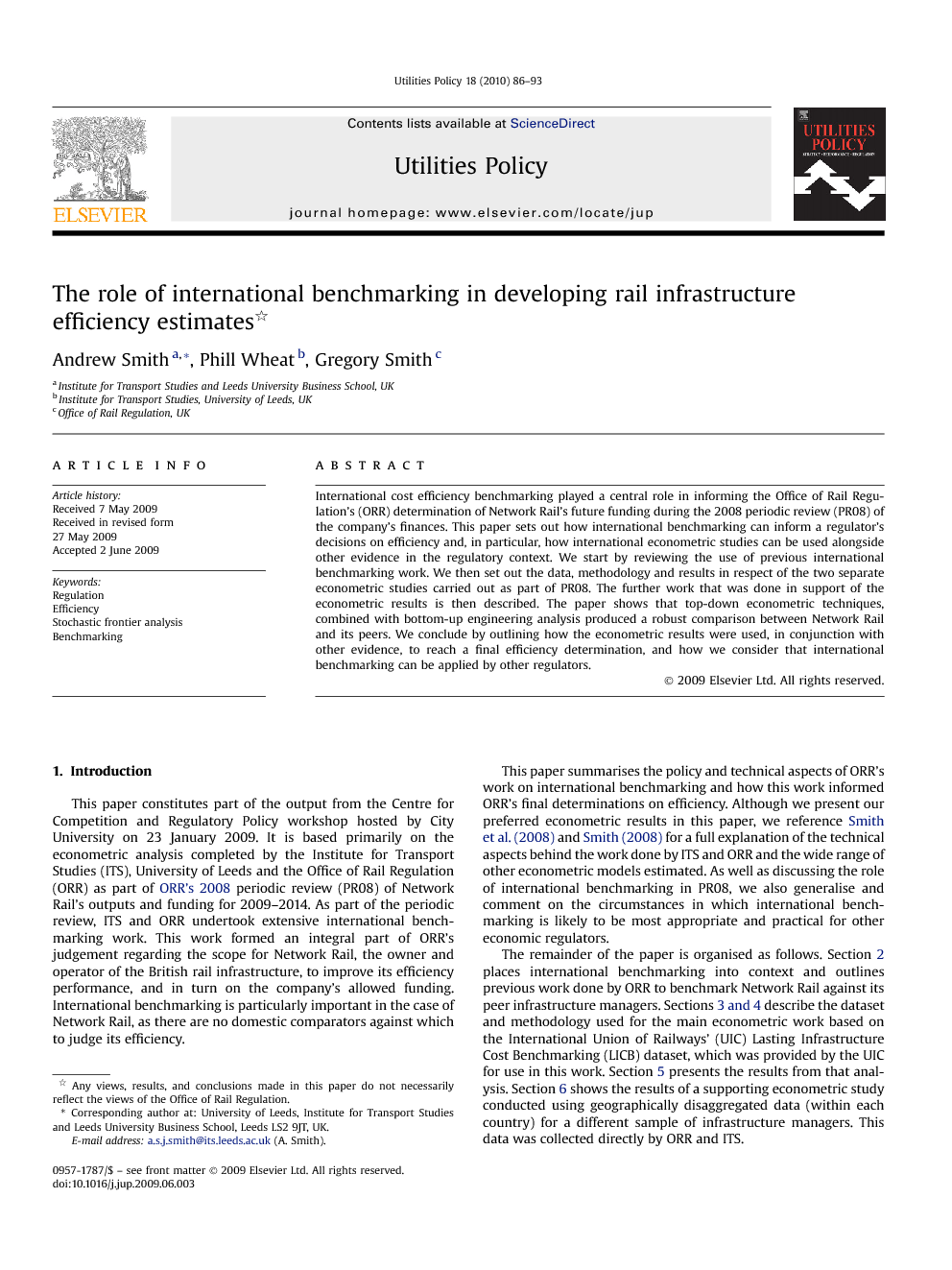 This paper constitutes part of the output from the Centre for Competition and Regulatory Policy workshop hosted by City University on 23 January 2009. It is based primarily on the econometric analysis completed by the Institute for Transport Studies (ITS), University of Leeds and the Office of Rail Regulation (ORR) as part of ORR's 2008 periodic review (PR08) of Network Rail's outputs and funding for 2009–2014. As part of the periodic review, ITS and ORR undertook extensive international benchmarking work. This work formed an integral part of ORR's judgement regarding the scope for Network Rail, the owner and operator of the British rail infrastructure, to improve its efficiency performance, and in turn on the company's allowed funding. International benchmarking is particularly important in the case of Network Rail, as there are no domestic comparators against which to judge its efficiency. This paper summarises the policy and technical aspects of ORR's work on international benchmarking and how this work informed ORR's final determinations on efficiency. Although we present our preferred econometric results in this paper, we reference Smith et al. (2008) and Smith (2008) for a full explanation of the technical aspects behind the work done by ITS and ORR and the wide range of other econometric models estimated. As well as discussing the role of international benchmarking in PR08, we also generalise and comment on the circumstances in which international benchmarking is likely to be most appropriate and practical for other economic regulators. The remainder of the paper is organised as follows. Section 2 places international benchmarking into context and outlines previous work done by ORR to benchmark Network Rail against its peer infrastructure managers. Sections 3 and 4 describe the dataset and methodology used for the main econometric work based on the International Union of Railways' (UIC) Lasting Infrastructure Cost Benchmarking (LICB) dataset, which was provided by the UIC for use in this work. Section 5 presents the results from that analysis. Section 6 shows the results of a supporting econometric study conducted using geographically disaggregated data (within each country) for a different sample of infrastructure managers. This data was collected directly by ORR and ITS. Section 7 provides examples of additional, supporting studies conducted or commissioned by ORR and discusses how ORR combined the results of the different studies to form its overall judgement on the scope for Network Rail to improve its efficiency over the five year control period starting on 1 April 2009. Section 8 offers our conclusions.

International benchmarking has proved to be a useful and important tool in informing ORR's judgements on the scope for efficiency improvement. The econometric work based on the UIC data proved to be robust in respect of different methodologies and various sensitivities. The supplementary, regional international benchmarking econometric study also provided additional support for the main econometric work. Furthermore, ORR interpreted the results conservatively, and also drew on a wide range of other analyses, including engineering-based bottom-up studies. To what extent, however, can this type of approach be generalised and applied by other economic regulators? A key success factor in this case was the fact that a high quality dataset already existed (the UIC's LICB dataset). Furthermore, the UIC was interested in considering new approaches to analysing this data for its own purposes, separate from the objectives of ORR in respect of PR08. UIC thus agreed to provide the data for our study. It is worth noting that the international benchmarking workstream of PR08 started three years before the determination was published, emphasising the fact that the development of an international benchmarking framework can take many years to develop, even under the relatively favourable conditions in this case, with the existence of a “ready-to-go” dataset. Having access to an existing, good quality dataset from UIC therefore clearly impacted on the ability of ORR to place international benchmarking at the forefront of its efficiency analysis. That said, the use of the regional international dataset, which ITS and ORR collected from scratch, demonstrates that good progress can be made if regulators and companies aim to develop a benchmarking framework over a number of years, working between periodic reviews, rather than having to rely on studies commissioned at each review within a constrained timeframe. The preliminary results from the international regional benchmarking work confirmed the results from the LICB study. Economic regulators should therefore not necessarily be deterred by the challenges and work involved in international benchmarking; but the lesson from our study is that work needs to start early, and that some of the benefits will not be felt until future price reviews. ORR is currently considering how the current approach can be retained, and developed, for use in CP5 and beyond. Of course, regulators need to recognise the inherent uncertainties involved in undertaking international comparisons. It is therefore important that the econometric results are shown to be robust, and that the results are not overly sensitive to the methodology or particular model adopted (except where there are strong reasons to prefer one model or approach over another). The fact that the preferred model in this case was robust on its own terms, and also with respect to changes in the method and other sensitivities further increased confidence in the findings. Furthermore, as was the case in PR08, given the special challenges posed by international benchmarking, it is prudent for regulators interpret the econometric results conservatively, and combine them with a wide range of other evidence, and in particular bottom-up engineering-based studies. Finally, we note that, for the case of rail infrastructure in Britain, the very large cost rises experienced since Hatfield meant that external benchmarks, based on hard data, were crucial to ORR's analysis. The lack of domestic comparators for obtaining comparisons of productivity levels thus increased the importance of international benchmarking in this case. The availability of domestic comparators in other sectors means that the benefits of international benchmarking may not necessarily justify the investment in all cases, at least in the short term. However, obtaining an international perspective is important in any industry, and particularly where the ability to make domestic comparisons is being reduced by common (group) ownership of previously independent infrastructure companies. Whilst international benchmarking requires greater commitment by the regulator, we consider that the benefits can be significant. ORR intends to take forward and further develop its approach to international benchmarking for use in future regulatory price reviews.