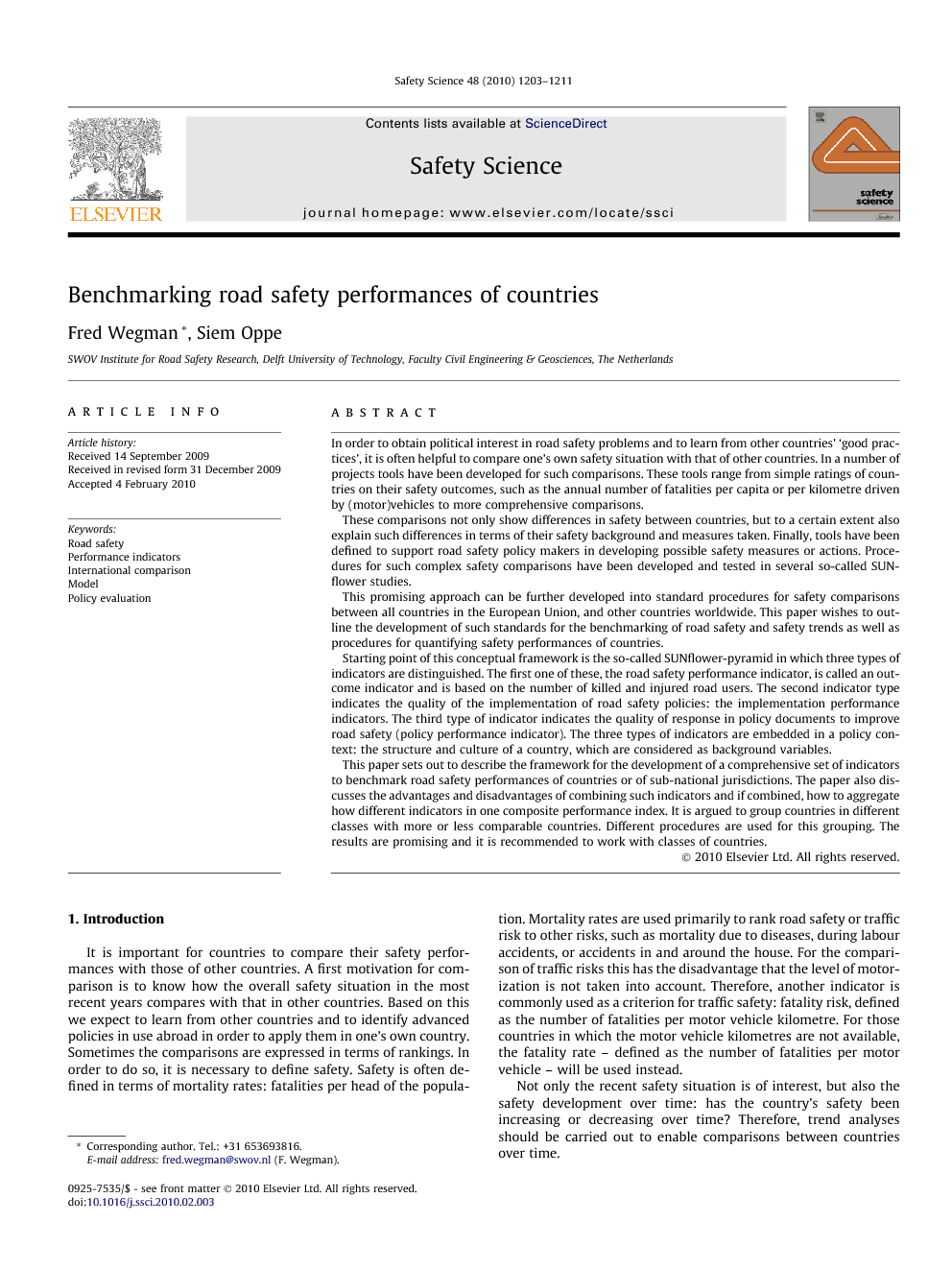 In order to obtain political interest in road safety problems and to learn from other countries’ ‘good practices’, it is often helpful to compare one’s own safety situation with that of other countries. In a number of projects tools have been developed for such comparisons. These tools range from simple ratings of countries on their safety outcomes, such as the annual number of fatalities per capita or per kilometre driven by (motor)vehicles to more comprehensive comparisons. These comparisons not only show differences in safety between countries, but to a certain extent also explain such differences in terms of their safety background and measures taken. Finally, tools have been defined to support road safety policy makers in developing possible safety measures or actions. Procedures for such complex safety comparisons have been developed and tested in several so-called SUNflower studies. This promising approach can be further developed into standard procedures for safety comparisons between all countries in the European Union, and other countries worldwide. This paper wishes to outline the development of such standards for the benchmarking of road safety and safety trends as well as procedures for quantifying safety performances of countries. Starting point of this conceptual framework is the so-called SUNflower-pyramid in which three types of indicators are distinguished. The first one of these, the road safety performance indicator, is called an outcome indicator and is based on the number of killed and injured road users. The second indicator type indicates the quality of the implementation of road safety policies: the implementation performance indicators. The third type of indicator indicates the quality of response in policy documents to improve road safety (policy performance indicator). The three types of indicators are embedded in a policy context: the structure and culture of a country, which are considered as background variables. This paper sets out to describe the framework for the development of a comprehensive set of indicators to benchmark road safety performances of countries or of sub-national jurisdictions. The paper also discusses the advantages and disadvantages of combining such indicators and if combined, how to aggregate how different indicators in one composite performance index. It is argued to group countries in different classes with more or less comparable countries. Different procedures are used for this grouping. The results are promising and it is recommended to work with classes of countries.

It is important for countries to compare their safety performances with those of other countries. A first motivation for comparison is to know how the overall safety situation in the most recent years compares with that in other countries. Based on this we expect to learn from other countries and to identify advanced policies in use abroad in order to apply them in one’s own country. Sometimes the comparisons are expressed in terms of rankings. In order to do so, it is necessary to define safety. Safety is often defined in terms of mortality rates: fatalities per head of the population. Mortality rates are used primarily to rank road safety or traffic risk to other risks, such as mortality due to diseases, during labour accidents, or accidents in and around the house. For the comparison of traffic risks this has the disadvantage that the level of motorization is not taken into account. Therefore, another indicator is commonly used as a criterion for traffic safety: fatality risk, defined as the number of fatalities per motor vehicle kilometre. For those countries in which the motor vehicle kilometres are not available, the fatality rate – defined as the number of fatalities per motor vehicle – will be used instead. Not only the recent safety situation is of interest, but also the safety development over time: has the country’s safety been increasing or decreasing over time? Therefore, trend analyses should be carried out to enable comparisons between countries over time. For all types of comparison the most important question is: which country do we want to compare ourselves with? This question is not easily answered. The answer depends on the purpose of the comparison. If only a simple ranking of countries in a certain year is required, then the fatality risk indicator seems to provide sufficient information. However, even then it is not fair to carry out a direct comparison between all countries. Some countries have a more difficult task to fulfil than others and a correction for such a handicap should be applied. However, it is not easy to define and measure such a handicap. Basically this statement on ‘handicaps’ goes back to two observations. First of all, weaknesses and opportunities of different countries should be identified in the structure and culture layer. To mention two examples only: a strong leadership in a country to implement effective road safety measures, or a willingness in a society to accept freedom-restricting legislation and enforcement to improve road safety such as lowering speed limits and drinking at driving limits. Another observation is that if a country has taken all well-known, easy to implement road safety measures, new approaches have to develop to make further progress. This may result in a stage of diminishing marginal return of investments, and consequently, in less support from society and politics. If a comparison over time needs to be carried out, then the situation is even more complicated. In that case there is not a single indicator that unambiguously ranks countries. It is not easy to define ‘the-best-in-class’ this way. Nor is a comparison of a large number of trends easy to make. Comparisons between a smaller range of countries with similar traffic systems or safety levels, or with a more general common background seem to be more promising. Of course countries can learn from measures taken in all other countries. But to formulate targets or plans it is more realistic to compare with countries in the same situation, and/or with the same economical, historical and geographical background, and/or the same level of motorization and safety development as resulted from the SUNflower+6 study (Wegman et al., 2005). To address this problem of meaningful comparisons in the field of road safety, the SUNflower approach was developed. SUNflower is the acronym of a series of projects. These studies started with a comparison of road safety developments in Sweden, the United Kingdom and the Netherlands (Koornstra et al., 2002). Later this approach was extended to include six other European countries: SUNflower+6 in which three groups of three countries compared themselves using the same methodology (Wegman et al., 2005). These countries include the traditional SUN countries, three countries in the South of Europe: Greece, Portugal, Spain (with special emphasis on Catalonia) and three in Central Europe: the Czech Republic, Hungary and Slovenia. The third and most recent study, SUNflowerNext (Wegman et al., 2008), developed a framework for benchmarking the safety performance of countries and made first attempts to capture this process in a safety performance index. This paper introduces the SUNflowerNext approach. This approach aims to develop a knowledge-based framework for comprehensive benchmarking of road safety performances and developments of a country or of sub-national jurisdictions. Benchmarking is the search and implementation of best practices. For this benchmarking we introduce different indicators for road safety performances (Section 3). These different indicators will be combined in a composite index and the pros and cons of this approach are discussed (Section 4). Three different types of performance indicators are discussed (Section 5). Benchmarking compares the performance of a country with other so-called ‘best-in-class’ practices (in other countries). How to form ‘classes’ is subject of Section 6. The paper concludes with a section on conclusions (Section 7).

Benchmarking the road safety performance of countries as a basis for learning and speeding up positive developments can be considered a promising step in improving road safety. Mainly because of the simplicity of the approach and its appeal to a wider audience, among whom politicians and policymakers, benchmarking is already applied in many fields. However, it has not really made its entrance into the world of road safety yet. A simple ranking, but even better, a well-accepted benchmarking could result in inviting experts to explain positions and to explain changes in positions to a wider audience. Without any doubt, such benchmark results will attract attention from the media and this can be used to make further steps. However, if we consider benchmarking mainly as a basis for learning from one another, we are not only interested in the final score/rate/ranking, but also in the backgrounds of those scores, in the components that contribute to the scores, and in the potential for improvements. Benchmark results need to be accepted by policy makers and scientists; this report has been written to obtain support in the field of road safety. Benchmarking is a process in which countries or sub-national jurisdictions (regions and states), evaluate various aspects of their performance in relation to other practices, among which the so-called ‘best-in-class’. The benchmark results enable countries or jurisdictions to learn from others as a basis for developing measures and programmes which are aimed at increasing their own performance. To be able to carry out meaningful benchmarking, performance indicators need to be designed. The advantages of working with these indicators are imminent: simplification, quantification and communication. Wegman et al. (2008) distinguish three types of indicators covering all elements of the SUNflower-pyramid: road safety performance indicators, policy performance indicators and implementation performance indicators. The three types of indicators are embedded in a policy context, ‘the structure and culture of a country’, which are considered as background variables. The three indicators should be combined into a composite index. A comparison of the pros and cons leads to the conclusion that it is attractive to develop a composite index for road safety. By developing a composite index for road safety (the SUNflower road safety performance index?) it has become apparent that we still lack the knowledge to include all relevant aspects and, in addition, we lack data. Nevertheless, it is considered feasible to study performance indicators based on information from all EU Member States. It is recommended to develop valid and reliable indicators, both for policy performance and for implementation performance. In order to evaluate effects of safety programmes it is important to compare not just the most recent situation but also safety developments over time between countries. To analyse these developments trend-analysis techniques are required and indicators proposed. Finally it is recommended to make comparisons and benchmarks not only between countries but also for regions within countries. A few subjects for further research are identified throughout this paper. Detailing the different performance indicators is a key area for research. Furthermore, it is anticipated to collect compatible national data sets in a European research project and use these data to design a composite performance index.