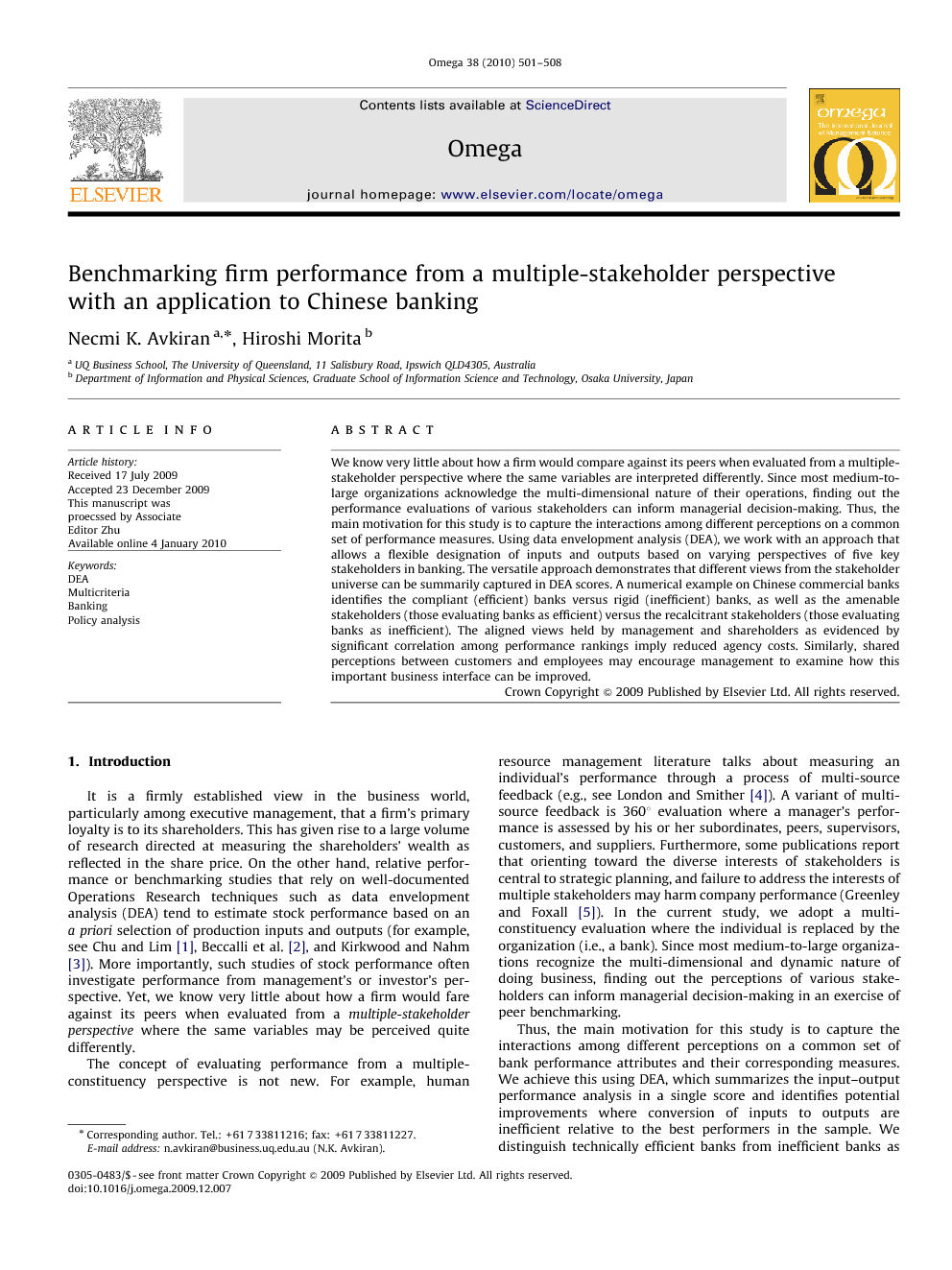 We know very little about how a firm would compare against its peers when evaluated from a multiple-stakeholder perspective where the same variables are interpreted differently. Since most medium-to-large organizations acknowledge the multi-dimensional nature of their operations, finding out the performance evaluations of various stakeholders can inform managerial decision-making. Thus, the main motivation for this study is to capture the interactions among different perceptions on a common set of performance measures. Using data envelopment analysis (DEA), we work with an approach that allows a flexible designation of inputs and outputs based on varying perspectives of five key stakeholders in banking. The versatile approach demonstrates that different views from the stakeholder universe can be summarily captured in DEA scores. A numerical example on Chinese commercial banks identifies the compliant (efficient) banks versus rigid (inefficient) banks, as well as the amenable stakeholders (those evaluating banks as efficient) versus the recalcitrant stakeholders (those evaluating banks as inefficient). The aligned views held by management and shareholders as evidenced by significant correlation among performance rankings imply reduced agency costs. Similarly, shared perceptions between customers and employees may encourage management to examine how this important business interface can be improved.

It is a firmly established view in the business world, particularly among executive management, that a firm's primary loyalty is to its shareholders. This has given rise to a large volume of research directed at measuring the shareholders’ wealth as reflected in the share price. On the other hand, relative performance or benchmarking studies that rely on well-documented Operations Research techniques such as data envelopment analysis (DEA) tend to estimate stock performance based on an a priori selection of production inputs and outputs (for example, see Chu and Lim [1], Beccalli et al. [2], and Kirkwood and Nahm [3]). More importantly, such studies of stock performance often investigate performance from management's or investor's perspective. Yet, we know very little about how a firm would fare against its peers when evaluated from a multiple-stakeholder perspective where the same variables may be perceived quite differently. The concept of evaluating performance from a multiple-constituency perspective is not new. For example, human resource management literature talks about measuring an individual's performance through a process of multi-source feedback (e.g., see London and Smither [4]). A variant of multi-source feedback is 360° evaluation where a manager's performance is assessed by his or her subordinates, peers, supervisors, customers, and suppliers. Furthermore, some publications report that orienting toward the diverse interests of stakeholders is central to strategic planning, and failure to address the interests of multiple stakeholders may harm company performance (Greenley and Foxall [5]). In the current study, we adopt a multi-constituency evaluation where the individual is replaced by the organization (i.e., a bank). Since most medium-to-large organizations recognize the multi-dimensional and dynamic nature of doing business, finding out the perceptions of various stakeholders can inform managerial decision-making in an exercise of peer benchmarking. Thus, the main motivation for this study is to capture the interactions among different perceptions on a common set of bank performance attributes and their corresponding measures. We achieve this using DEA, which summarizes the input–output performance analysis in a single score and identifies potential improvements where conversion of inputs to outputs are inefficient relative to the best performers in the sample. We distinguish technically efficient banks from inefficient banks as evaluated by a selection of key attributes and stakeholders. In addition to shareholders, other key stakeholders would normally include customers, management, bank employees, and regulators. In the first application of multiple-stakeholder perspective to evaluating relative bank performance, we illustrate how to answer the following key research questions: (a) Which banks are considered efficient by the stakeholders? We call this group the compliant banks. For example, regulators may reward such banks by relaxing additional reporting requirements or inspections because of their success in pleasing a wide section of the population that includes consumers. The argument in this example is that the other stakeholders are doing part of the regulator's job and sending favorable signals. (b) Which banks are considered inefficient by the stakeholders? We call this group the rigid banks and provide them with benchmarking advice. For example, regulators may exercise tighter monitoring over this group. (c) Which stakeholders are evaluating the banks as efficient? We call this group the amenable stakeholders. For example, banks could collaborate with such stakeholders for public relations and promotional purposes, particularly aimed at winning over the recalcitrant stakeholders (identified next). (d) Which stakeholders are evaluating the banks as inefficient? We call this group the recalcitrant stakeholders. For example, bank management could spend more effort in satisfying such stakeholders as suggested in the previous question. This kind of information can be channeled into promotional activities or marketing. Rest of the paper unfolds as follows. Section 2 offers an overview of DEA and its use with multiple stakeholders, followed by an explanation of the current paper's approach to selecting inputs and outputs. Section 3 begins with a description of the study setting and data, before outlining the formulations for the range-adjusted measure of efficiency. Results and analysis are detailed in 4 and 5, offers concluding remarks.

We set out to explore how a firm would compare against its peers when evaluated from a multiple-stakeholder perspective. In the process, we capture the interactions among different perceptions on a common set of performance measures. That is, we work with an approach that allows a flexible designation of inputs and outputs in DEA based on varying perspectives of five key stakeholders. The paper's approach applied to the data set on Chinese commercial banks helps identify the compliant (efficient) banks versus rigid (inefficient) banks, as well as the amenable stakeholders (those evaluating banks as efficient) versus the recalcitrant stakeholders (those evaluating banks as inefficient). The two compliant banks thus identified can be used by the regulators to set an example for the five rigid banks. One of the implications of the findings from the numerical example is that management ought to collaborate with the amenable shareholders to shape the perceptions held by the recalcitrant regulators. The measure of credit quality (i.e., equity/impaired loans) can benefit from substantial improvement across the majority of stakeholders. On the other hand, the measure of soundness (i.e., capital adequacy ratio) as evaluated by the regulators suggests no improvement, which we attribute to the regulators close monitoring of this key bank performance variable. Rank correlations indicate that management and shareholders are in reasonable agreement—suggesting aligned views between these stakeholders and thus, reduced agency costs. Another significant correlation is between customers and employees, once again, suggesting shared perceptions. The latter observation may encourage management to explore the reasons for the customer-employee agreement on performance evaluation with a view to improving this important business interface. We hope that the first extension of this paper would include an application of the method illustrated with real-world testing of the hypothesized relationships shown in Table 1. It would be of further interest to see how different Table 1 would look for different countries. Our efforts to collect survey data from China during the writing of this paper were not fruitful. One could also enrich the selection of attributes by shifting the focus to triple bottom line benchmarking. That is, banks’ relative performance can be rated on key environmental, ethical and financial outputs. This approach would reflect a core tenet of socially responsible investments, which aims to account for performance from the perspective of other key outputs in addition to financial returns to shareholders. Another direction for future research is to select the various attributes along the lines of the well-established balanced scorecard approach (see [26] for a study that combines DEA and BSC). Here, we also briefly discuss how differences in stakeholder perspectives can arise via alternative approaches that initially lead to Table 1. For example, executive management is likely to have a mainly formative approach to performance measurement. That is, they would evaluate their bank's performance with the intention of benchmarking it against other banks in the sector and ultimately raising their performance. On the other hand, shareholders and customers would primarily have a summative approach, where the former is interested in the investment decision (risk-return trade-off) and the latter is interested in finding the answer to the question “Which bank provides the services best suited to my needs?” We maintain that employees and regulators would have a mix of summative and formative approaches to performance evaluation. For example, employees would be summative in asking the question “Do I want to work here?” and formative at the same time because of their part in the benchmarking exercise instigated by the executive management. Similarly, a regulator's routine monitoring activities would be considered summative, whereas prescribed actions to rectify areas of concern (e.g., improving credit quality or reducing non-performing loans) would be formative. In addition to varying perceived desirability of attributes, this approach could yield a different set of performance attributes serving different evaluation foci. Finally, we acknowledge a potential limitation of using super-efficiency scores in ranking exercises. According to simulation experiments conducted by Banker and Chang [27], super-efficiency based on the radial method outlined in the seminal paper by Andersen and Petersen [28] does not work satisfactorily in ranking efficient DMUs. While we are not aware of any reports in DEA literature confirming the simulated findings of Banker and Chang in studies based on real world data, we would welcome similar testing of SRAM introduced in the current study and other non-radial models in future studies. Also see [29] for a discussion of infeasibility in super-efficiency and how it may affect ranking.