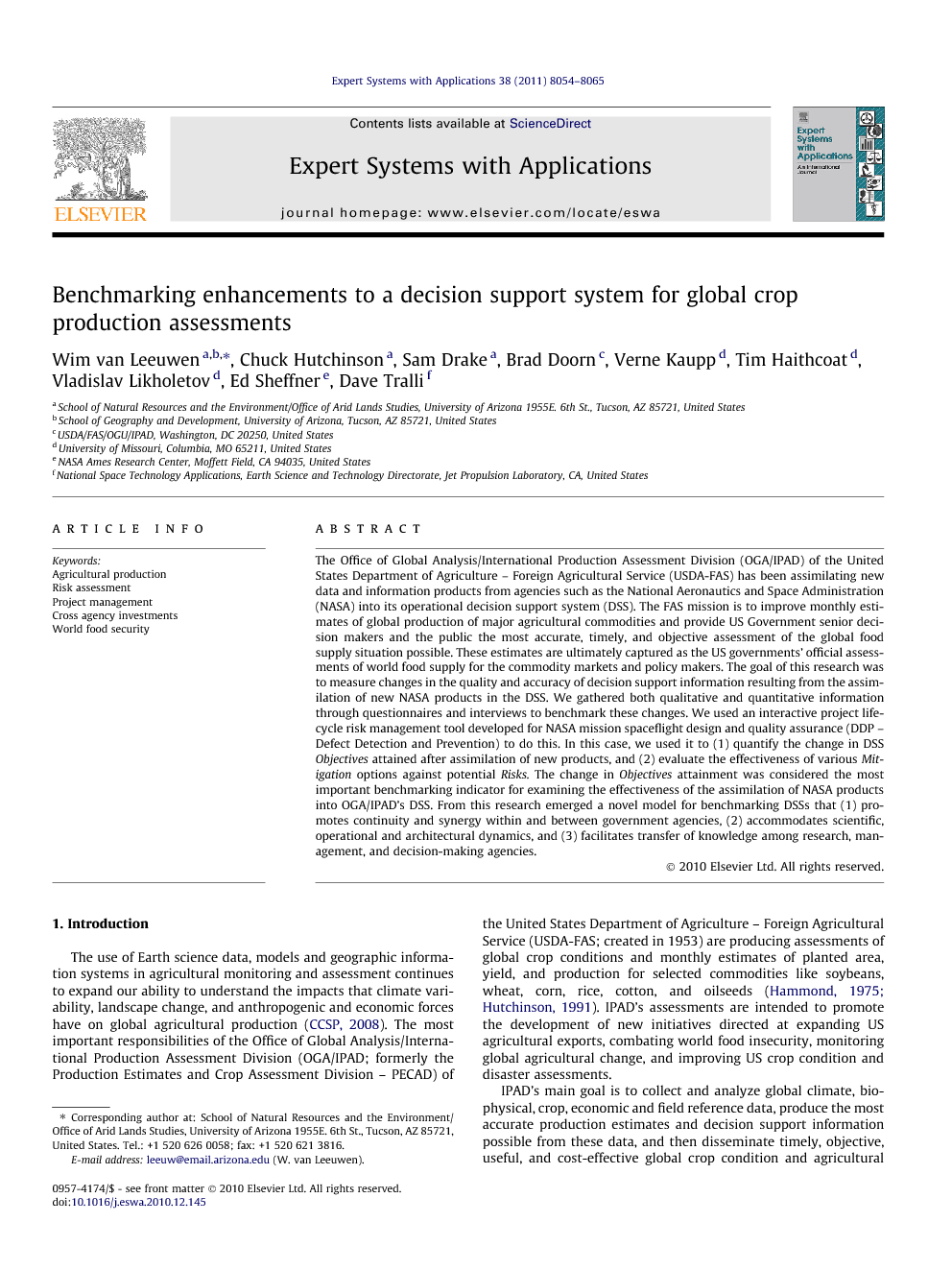 The Office of Global Analysis/International Production Assessment Division (OGA/IPAD) of the United States Department of Agriculture – Foreign Agricultural Service (USDA-FAS) has been assimilating new data and information products from agencies such as the National Aeronautics and Space Administration (NASA) into its operational decision support system (DSS). The FAS mission is to improve monthly estimates of global production of major agricultural commodities and provide US Government senior decision makers and the public the most accurate, timely, and objective assessment of the global food supply situation possible. These estimates are ultimately captured as the US governments’ official assessments of world food supply for the commodity markets and policy makers. The goal of this research was to measure changes in the quality and accuracy of decision support information resulting from the assimilation of new NASA products in the DSS. We gathered both qualitative and quantitative information through questionnaires and interviews to benchmark these changes. We used an interactive project lifecycle risk management tool developed for NASA mission spaceflight design and quality assurance (DDP – Defect Detection and Prevention) to do this. In this case, we used it to (1) quantify the change in DSS Objectives attained after assimilation of new products, and (2) evaluate the effectiveness of various Mitigation options against potential Risks. The change in Objectives attainment was considered the most important benchmarking indicator for examining the effectiveness of the assimilation of NASA products into OGA/IPAD’s DSS. From this research emerged a novel model for benchmarking DSSs that (1) promotes continuity and synergy within and between government agencies, (2) accommodates scientific, operational and architectural dynamics, and (3) facilitates transfer of knowledge among research, management, and decision-making agencies.

The use of Earth science data, models and geographic information systems in agricultural monitoring and assessment continues to expand our ability to understand the impacts that climate variability, landscape change, and anthropogenic and economic forces have on global agricultural production (CCSP, 2008). The most important responsibilities of the Office of Global Analysis/International Production Assessment Division (OGA/IPAD; formerly the Production Estimates and Crop Assessment Division – PECAD) of the United States Department of Agriculture – Foreign Agricultural Service (USDA-FAS; created in 1953) are producing assessments of global crop conditions and monthly estimates of planted area, yield, and production for selected commodities like soybeans, wheat, corn, rice, cotton, and oilseeds (Hammond, 1975 and Hutchinson, 1991). IPAD’s assessments are intended to promote the development of new initiatives directed at expanding US agricultural exports, combating world food insecurity, monitoring global agricultural change, and improving US crop condition and disaster assessments. IPAD’s main goal is to collect and analyze global climate, biophysical, crop, economic and field reference data, produce the most accurate production estimates and decision support information possible from these data, and then disseminate timely, objective, useful, and cost-effective global crop condition and agricultural market intelligence information with a high level of confidence in the production estimates. Low confidence forecasts can translate into more volatile markets where food shortages and over-stocks are more likely to occur. Stability of food prices requires a delicate balance between food supply and demand. Accurate assessments and forecasts of the global food supply help achieve this balance. These food supply estimates are arguably the most scrutinized and comprehensive in the world. The collaboration between USDA and the National Aeronautics and Space Administration (NASA) to improve the accuracy and timeliness of global crop production forecasts is an important component in helping to achieve market stability. This collaboration continues to introduce new NASA Earth science and measurements, model predictions, and information technology to enhance decision support for the IPAD. IPAD has developed a complex data- and model-driven decision support system that increasingly provides structure to the decision-making process and leads to more consistent and reliable crop production estimates for all countries potentially influencing US agricultural industries and policies. Enhanced decision-support derived from Earth science and the satellite perspective and based on its comprehensive view provides the objective, global, and farm-level information necessary to assess world-wide production throughout the growing season and improves the USDA’s capability to serve its management and policy responsibilities to society. As US and global socio-economic pressures increase due to globalization, population pressure, resource depletion and global climate change, IPAD analysts are facing rapidly increasing information demands. As a result, IPAD is gradually incorporating more advanced data, model, and technology systems to enhance the efficiency and accuracy of global commodity estimates. Since 1974, NASA and the USDA have collaborated intermittently on research in remote sensing of agriculture (Hammond, 1975 and Macdonald and Hall, 1980). More recently NASA and academic research partners have been collaborating with the USDA through a series of projects that have worked to assimilate NASA products to improve IPAD’s decision support system (DSS). Operational use of new products (data, information, models) within an organization is not purely a technical issue. A decision support tool operates within a broader decision making system that is based on data and technology but is driven by the experience, preferences and perceptions of individuals and groups inside the organization who operate it. It is within this conceptual structure that any integration effort must be benchmarked to assess adverse effects, probability of success, and operational hurdles that must be overcome – technical or organizational. In this study, systematic benchmarking techniques (Lucertini et al., 1995 and Spendolini, 1992) were used to evaluate the effectiveness of risk-reducing mitigations like the assimilation and utilization of NASA Earth Observation System (EOS) (Justice et al., 1998) data. The Defect Detection and Prevention (DDP) risk management software tool developed by NASA’s Jet Propulsion Laboratory (JPL) (Cornford, 1998, Feather, 2001, Feather et al., 2000 and Gindorf and Cornford, 1999) was employed to quantify the effectiveness of the enhancements, using risk balance and attainment of objectives as performance indicators. The focus of this research was the application of a novel benchmarking approach to assess the impact of enhancements on a complex operational decision support system used by IPAD. The benchmarking process measures the change – or delta – between pre and post-enhancement states of the DSS by using metrics that quantify changes in the DSS after infusion of NASA science, data and technology. The outcome of this benchmarking is intended to quantify how investments from USDA and NASA have enhanced the performance of IPAD’s DSS. It is increasingly important for NASA’s Earth Sciences Division to integrate NASA solutions into DSSs (McCuistion & Birk, 2005). Although other agencies have also contributed to the enhancements of IPAD’s DSS, benchmarked in this study, NASA products are the focus to illustrate how environmental remote sensing science and data assist IPAD to attain its mission objectives and requirements.