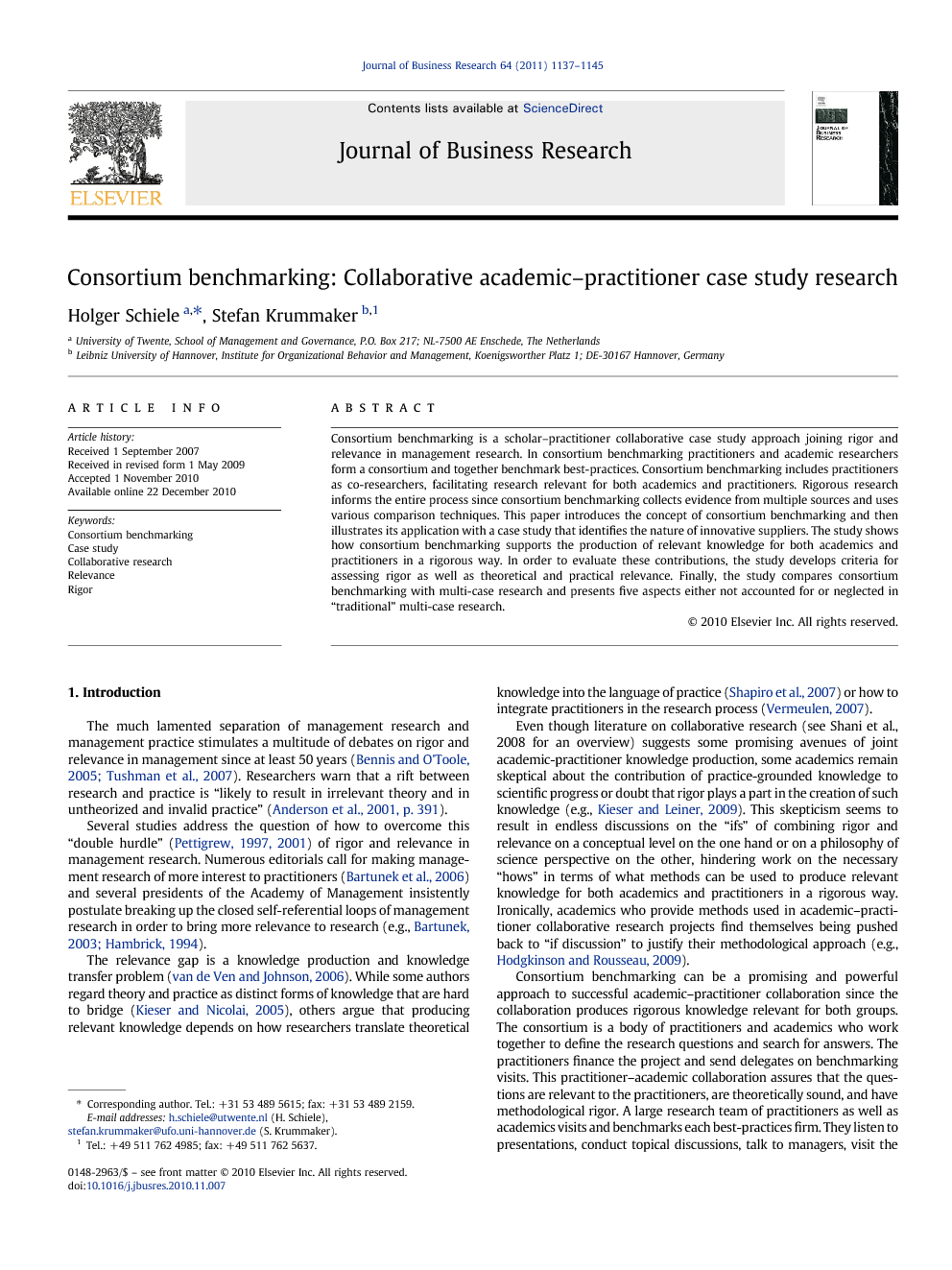 The much lamented separation of management research and management practice stimulates a multitude of debates on rigor and relevance in management since at least 50 years (Bennis and O'Toole, 2005 and Tushman et al., 2007). Researchers warn that a rift between research and practice is “likely to result in irrelevant theory and in untheorized and invalid practice” (Anderson et al., 2001, p. 391). Several studies address the question of how to overcome this “double hurdle” (Pettigrew, 1997 and Pettigrew, 2001) of rigor and relevance in management research. Numerous editorials call for making management research of more interest to practitioners (Bartunek et al., 2006) and several presidents of the Academy of Management insistently postulate breaking up the closed self-referential loops of management research in order to bring more relevance to research (e.g., Bartunek, 2003 and Hambrick, 1994). The relevance gap is a knowledge production and knowledge transfer problem (van de Ven and Johnson, 2006). While some authors regard theory and practice as distinct forms of knowledge that are hard to bridge (Kieser and Nicolai, 2005), others argue that producing relevant knowledge depends on how researchers translate theoretical knowledge into the language of practice (Shapiro et al., 2007) or how to integrate practitioners in the research process (Vermeulen, 2007). Even though literature on collaborative research (see Shani et al., 2008 for an overview) suggests some promising avenues of joint academic-practitioner knowledge production, some academics remain skeptical about the contribution of practice-grounded knowledge to scientific progress or doubt that rigor plays a part in the creation of such knowledge (e.g., Kieser and Leiner, 2009). This skepticism seems to result in endless discussions on the “ifs” of combining rigor and relevance on a conceptual level on the one hand or on a philosophy of science perspective on the other, hindering work on the necessary “hows” in terms of what methods can be used to produce relevant knowledge for both academics and practitioners in a rigorous way. Ironically, academics who provide methods used in academic–practitioner collaborative research projects find themselves being pushed back to “if discussion” to justify their methodological approach (e.g., Hodgkinson and Rousseau, 2009). Consortium benchmarking can be a promising and powerful approach to successful academic–practitioner collaboration since the collaboration produces rigorous knowledge relevant for both groups. The consortium is a body of practitioners and academics who work together to define the research questions and search for answers. The practitioners finance the project and send delegates on benchmarking visits. This practitioner–academic collaboration assures that the questions are relevant to the practitioners, are theoretically sound, and have methodological rigor. A large research team of practitioners as well as academics visits and benchmarks each best-practices firm. They listen to presentations, conduct topical discussions, talk to managers, visit the firms' installations and review internal documents. After each visit, the consortium jointly analyzes the data, discusses emerging concepts and examines relationships between diverse concepts and/or variables. Consortium benchmarking advances traditional multi-case approaches by including practitioners, not only as key informants but as co-researchers. Furthermore, since consortium benchmarking is a team-based approach focusing on best-practices cases, relevant discussions between academics and practitioners, or “meta discourses”, are likely to emerge and flourish. This study contributes to management research in four ways. The study introduces consortium benchmarking, a collective benchmarking approach originally developed by practitioners which has gained most attention in German-speaking countries (this paper offers the first comprehensive introduction to consortium benchmarking in an English language journal); it suggests enhancing this approach by explicitly and systematically including academics in the consortium, turning consortium benchmarking into a method of joint academic–practitioner knowledge creation; demonstrates how consortium benchmarking can enhance traditional multi-case study research and narrow the “practitioner–academic divide” (Brennan and Ankers, 2004); and contributes to the discussion of how to conduct rigorous and relevant research in academic–practitioner collaborations. An example illustrates how a consortium benchmarking project works and can produce, in a rigorous way, findings that are relevant for both academics and practitioners. The first section of the paper describes how management research defines rigor and relevance and discusses the benefits of case study research for producing relevant knowledge, the second section presents four steps in conducting a consortium benchmarking project, and concludes with an illustration and discussion of the application and its contributions to the field.