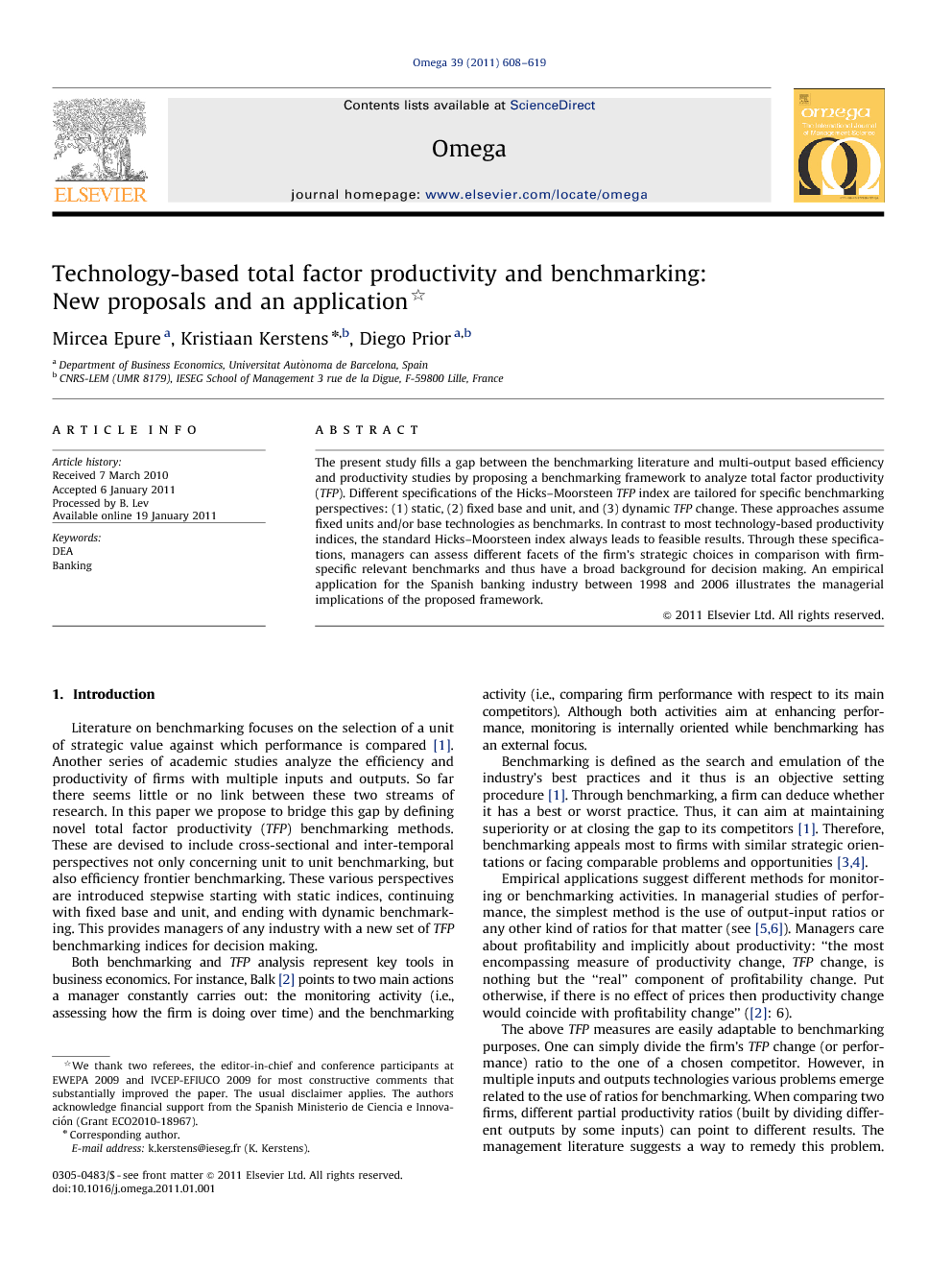 The present study fills a gap between the benchmarking literature and multi-output based efficiency and productivity studies by proposing a benchmarking framework to analyze total factor productivity (TFP). Different specifications of the Hicks–Moorsteen TFP index are tailored for specific benchmarking perspectives: (1) static, (2) fixed base and unit, and (3) dynamic TFP change. These approaches assume fixed units and/or base technologies as benchmarks. In contrast to most technology-based productivity indices, the standard Hicks–Moorsteen index always leads to feasible results. Through these specifications, managers can assess different facets of the firm's strategic choices in comparison with firm-specific relevant benchmarks and thus have a broad background for decision making. An empirical application for the Spanish banking industry between 1998 and 2006 illustrates the managerial implications of the proposed framework.

This research is founded in the traditional view of benchmarking as the search and emulation of best practices. By applying the HMTFP index [19], this study aims at closing the gap between benchmarking and multi inputs and outputs TFP frontier analysis. In this way, TFP benchmarking can be a new way to set strategic objectives for managers and to analyze firm performance for regulators and researchers. The advantages of the proposed tool for benchmarking are various. First, this Hicks–Moorsteen type index, which is currently rather scarcely used, solves known problems of TFP measurement in the presence of variable returns to scale. Indeed, under weak assumptions of strong disposability and VRS, this index is always feasible. This property is crucial for benchmarking analysis as firm-specific results have to be provided. Thus, one implication is that the HMTFP index deserves greater attention. Second, through straightforward manipulations of the HMTFP index, versatile tools for benchmarking analysis are obtained. Pursuing a global image of TFP benchmarking, three measures result from diverse assumptions: (1) static benchmark analysis, (2) fixed base and unit benchmark analysis, and (3) dynamic benchmarking analysis using a new decomposition. These benchmarking viewpoints assume fixing a particular DMU as a benchmark (very little used in previous analyses) and/or base technologies (a classical benchmark approach) together with the pros of the standard HMTFP index. Each of these settings enables managers to see a certain facet of the firm's activity. These benchmarking indices are stand alone tools, but can also be potentially combined to offer a broad perspective for decision making. For the empirical analysis, this paper used benchmarking criteria based on current interests of banking institutions: technical efficiency and good stress tests results. While technical efficiency has always been considered an important aspect, stress tests attracted a lot of interest in the aftermath of the recent financial crisis. Results confirm the growth phase of the Spanish banking industry and illustrate how TFP scores evolve in the sector. This consistent growth phase originated at the end of the deregulation of the savings banks sector. For instance, for these banks Grifell-Tatjé and Lovell [30] found that productivity declined at the end of the 1980s, beginning of the 1990s. For the following period, recent studies find significant productivity increases due to either deregulations [33], or technological change (e.g., [45] and [30]). Furthermore, the fluctuations encountered in banks' TFP may be due to expansion or consolidation strategies, such as mergers. For example, Cuesta and Orea [41] find immediate efficiency decreases for savings banks involved in mergers, followed by significant increases. In our empirical application these fluctuations are revealed through significant catching-up effects. Moreover, this sudden decrease which follows expansion strategies can explain the TFP evolution of Bancaja, the benchmark. Also, Bancaja's significant TFP growth at the end of the analyzed period is in line with the results of Illueca et al. [36], who state that savings banks that expand outside their original markets achieve greater productivity gains. Throughout the paper, findings are first scrutinized by comparing the sample level results with the established benchmark under the various benchmarking scenarios. While key results are stable between the different approaches, differences may appear mostly due to the chosen treatment of the fixed or changing technology. Next, the same scenarios are analyzed in a unit to unit analysis revealing dissimilar behaviors of banking units. This study makes headway for future research since the proposed methodological tools can employ benchmarking criteria adapted to any scenario or industry. For instance, in the standard benchmarking approach comparisons against efficient units reveal the firm's position in the market and the distance separating it from the efficient units. This is a method to discover, understand and implement new organizational practices. In this line it could be interesting to define analyses by benchmarking against strategic groups' leaders. However, in some cases managers may want to compare performance against their local competitor, even if this may be an inefficient firm. For savings banks, this local competitor may be a unit that is developing its branch network in the same region. All these benchmarking options contribute to organizational learning and strategic planning and reveal how decision making can contribute to the performance of firms over time. Finally a limitation of this study – an avenue of future research – is the absence of risk variables in TFP indices. The importance of including risk measures has become acute following the recent financial crisis. One option could be to obtain risk-adjusted estimations of TFP (e.g., the work done by Hughes and Mester [50] in a cost function approach could be adapted to TFP indices). For instance, future studies could introduce the risk variables through outputs such as the credit-risk expressed as the amount of off-balance-sheet items. Alternatively one could use banking ratios defining the risk environment (e.g., percentage of insolvency provisions or simply the risk of assets).