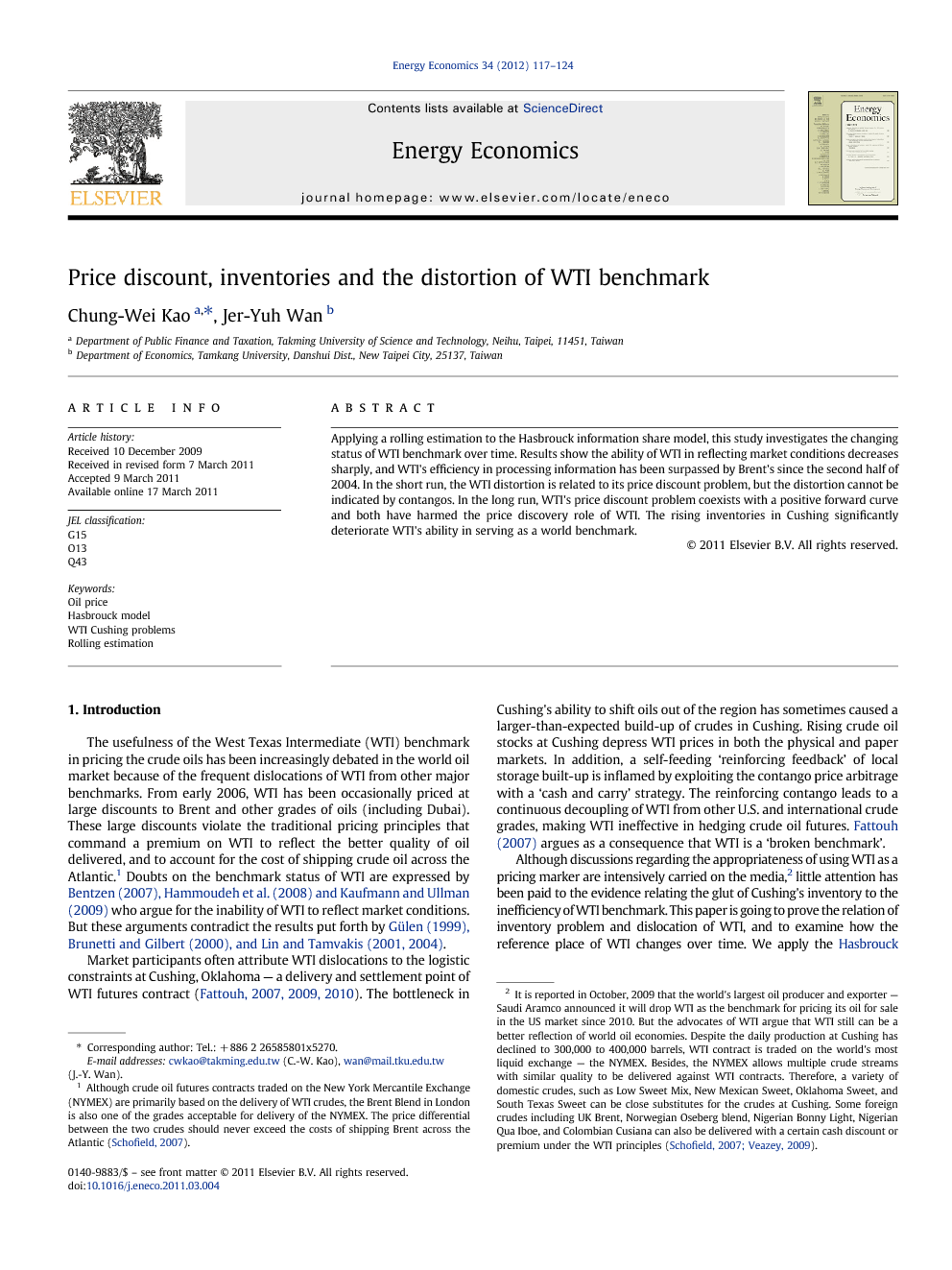 Applying a rolling estimation to the Hasbrouck information share model, this study investigates the changing status of WTI benchmark over time. Results show the ability of WTI in reflecting market conditions decreases sharply, and WTI's efficiency in processing information has been surpassed by Brent's since the second half of 2004. In the short run, the WTI distortion is related to its price discount problem, but the distortion cannot be indicated by contangos. In the long run, WTI's price discount problem coexists with a positive forward curve and both have harmed the price discovery role of WTI. The rising inventories in Cushing significantly deteriorate WTI's ability in serving as a world benchmark.

This paper applies the Hasbrouck (1995) information share model to a rolling estimation process to trace the changing status of WTI benchmark. The dynamics of WTI information share demonstrate the fact that WTI has lost its place as a pricing center for years. This result supports the opinion prevailing in markets that WTI benchmark has broken down. Signals indicating WTI dislocations are tied up with some eccentric price structures. The first one is the unusual discount on WTI price. The appearance of WTI discounts may significantly indicate the breakdowns in WTI benchmark in the short run. Another clue alerting to the malfunction in WTI benchmark is the shape of a forward curve. The frequency of contango, along with the forward spread, may signal the distortion problem in the medium/and long terms. But the shape of a forward curve is not a useful sign for WTI dislocation in the short run. Moreover, WTI discount problem is highly collinear with an upward-sloped forward curve in the medium-to-long terms, illustrating there are common factors contributing to the appearance of discount and contango problems in the long run. Since the slope of a forward curve is a proxy for inventories, the rising stocks at Cushing generated by the logistic bottlenecks may explain the declining efficiency of WTI benchmark. Results from regressing on Cushing's actual inventory data strongly indicate the inventory-accumulation has negative effect on the benchmark role of WTI. The WTI-Brent decoupling, starting at the beginning of 2006, has existed for years. Up to May, 2010 we could still see the WTI contract was sometimes sold at a large discount to Brent. To replace WTI, a new benchmark — the Argus Sour Crude Index (ASCI) was introduced in May 2009. As of 2010, Saudi Arabia abandoned WTI and priced its oil exporting to the US on ASCI. The ASCI index tracks the price in the physical market of US Gulf Coast crude oils, and is published as a differential to WTI crude oil and as a flat price. The ICE and the NYMEX respectively announced to launch futures contracts on ASCI index. One of the contracts is an ASCI outright contract. The other is a differential contract priced at the differential between the ASCI and WTI prices. From the perspective of NYMEX, launching the ASCI contract is to strengthen the benchmark status of the existing WTI contract, helping their customers to hedge price exposure to the global crude market with greater precision. Yet from the viewpoint of ICE, ICE hopes the outright ASCI index price may become more independent of its WTI base, especially when the differentials to WTI continue to be less stable than the differentials to Brent. With the growing global production and trading of the sour grades, quite a few of the traders support the launch of ASCI contracts. Since many refineries located in the US Gulf Coast region have upgraded their processing capacity for refining sour crude oils, traders believe it is better to use a sour crude grade as the benchmark for pricing the crude oils into the US. The future development of the ASCI contract could be one of the issues deserving concerns. Will the ASCI contract successfully replace the WTI benchmark? Without the supports of trading volumes, it is immature at present to discuss this question. However, it is worth to keep an eye on the developments of the ASCI contract and study the price discovery function of ASCI among several alternative markers, such as the WTI, Brent, and Dubai. Another possible direction of future study is re-examining the price discovery role of WTI with a structural model where the sources of shocks are indentified by Yan and Zivot, 2007, Yan and Zivot, 2010 and Wang and Yang, 2011. As commented in Lehmann (2002), the information share in the Hasbrouck model is based on the residuals of a vector error correction model in the reduced form, which does not make the interpretations of information share measure always clear. Yan and Zivot, 2007 and Yan and Zivot, 2010 propose to use the cumulative impulse response from the structural conitegrated VAR to gain new insights to the price discovery dynamics of information share measure. In this regard, a structural VAR model developed by Wang and Yang (2011) for examining price discovery in sequential markets can be used in further studies.