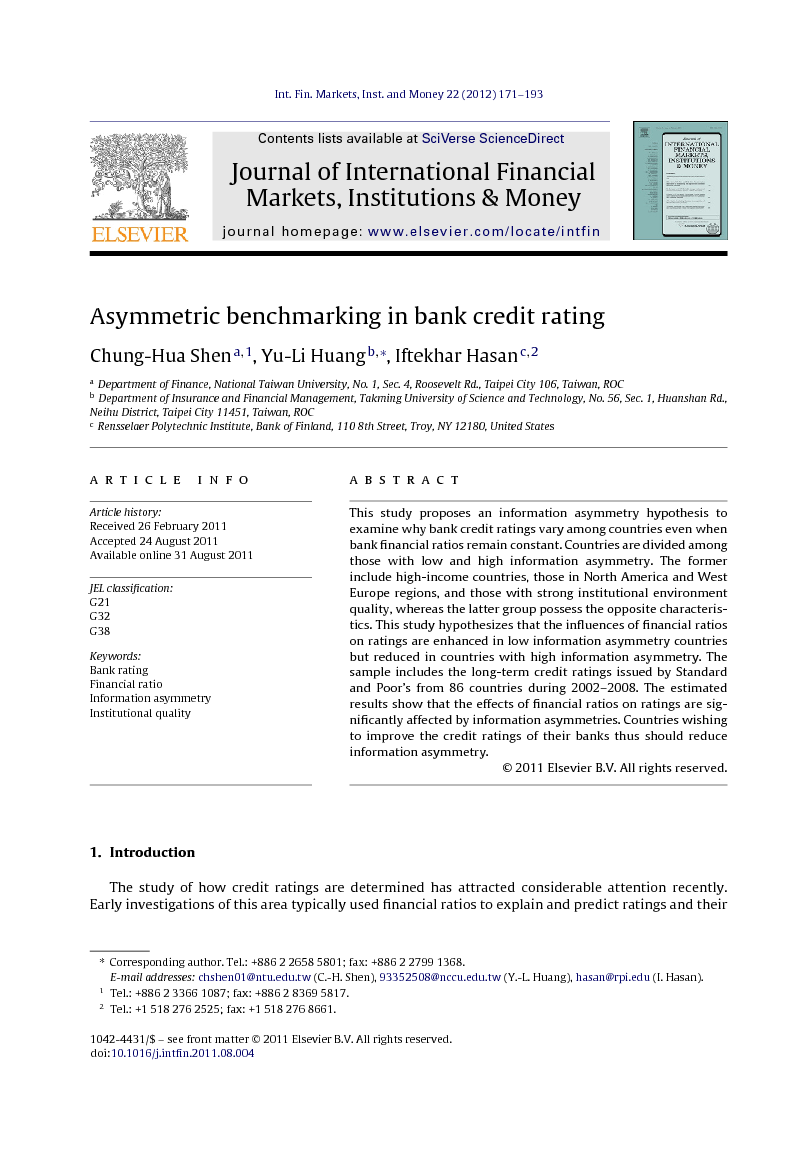 The study of how credit ratings are determined has attracted considerable attention recently. Early investigations of this area typically used financial ratios to explain and predict ratings and their changes.3 Recent works have identified two plausible “credit rating inconsistencies”. First, the same firm sometimes receives different ratings when rated by different rating agencies (Ederington, 1985, Beattie and Searle, 1992, Moon and Stotsky, 1993 and Cantor and Packer, 1994). This is considered an inconsistency because given full information disclosure the same firm should receive roughly equivalent ratings regardless of rating agency.4 The second inconsistency is that rating agencies issue different ratings for firms that have the same financial ratios but are located in different countries. That is, two firms with identical financial performance will not necessarily receive identical ratings. This study attempts to identify the causes of the second inconsistency. As identified in previous works, both asset opaqueness and information asymmetry cause split ratings (Jewell and Livingston, 1998, Livingston et al., 2006 and Livingston et al., 2007). However, a direct test of the latter is unavailable. This study examines a rich data of commercial banks from 86 countries during 2002–2008. Analyzing rating inconsistency is also of particular interest for banks and their supervisors because reliable assessment of the creditworthiness of obligors is an important precondition for the stability of a financial system as an inadequately high exposure to credit risk has been one of the leading sources for problems in financial institutions worldwide for many decades (Basel Committee on Banking Supervision 2000 and 2005). As a consequence, the analysis of the inconsistency of banks’ ratings across different obligor groups has also gained importance in academic research (Carey, 2001 and Jacobson et al., 2006). This paper proposes an information asymmetry hypothesis to investigate why ratings differ among banks with similar financial ratios in different countries. We posit that when a bank is located in an industrialized country, or in a country with strong institutional environment quality, the financial ratios are more likely to reflect bank intrinsic value. Accordingly, little asymmetric information exists between rating agencies and banks in these countries. In contrast, these asymmetric information problems are more acute in developing economies and countries with weak institutional environment quality, making banks’ financial ratios more susceptible than those in developed countries (Vives, 2006). The poor financial quality of such banks leads rating agencies to doubt the credibility of financial statements and thus issue lower ratings despite identical financial ratios. Accordingly, different ratings may be issued to two banks with similar financial ratios where one is located in a country with low information asymmetry while the other is in a country with high information asymmetry. The study makes three main contributions to the literature. First, this study demonstrates how information asymmetry influences the relationship between individual financial ratio and bank credit rating in a systematical way. Past studies, though mentioned the information asymmetry, do not examine it empirically. For example, Rojas-Suarez (2001) discussed the asymmetric information but did not proceed empirical studies. Ferri and Liu (2004) found non-financial firm ratings are explained by institutional quality but did not directly explore the information asymmetry, nor did they use banking sample. Next, our bank rating model uses the most comprehensive data set from 86 countries during 2002–2008. By contrast, previous studies use less number of sample countries and the focus is on non-financial firms (Ferri et al., 2001, Ferri and Liu, 2004, Purda, 2003 and Poon, 2003). While Poon and Firth (2005) and Poon et al. (2009) investigate banks ratings, their focus is on whether unsolicited ratings are downward bias. Third, we consider the possible influence of local and international accounting standards used by different banks. Recently, the increasing studies have investigated the influence of different accounting standards on accounting quality. Our model takes them into account to avoid the missing third variable problem. The remainder of this paper is organized as follows. Section 2 is literature review. Section 3 outlines and discusses the methodology. Section 4 describes data sources and descriptive statistical analysis. The results are reported in Section 5 and Section 6 is the robust testing. Section 7 summarizes the conclusions.