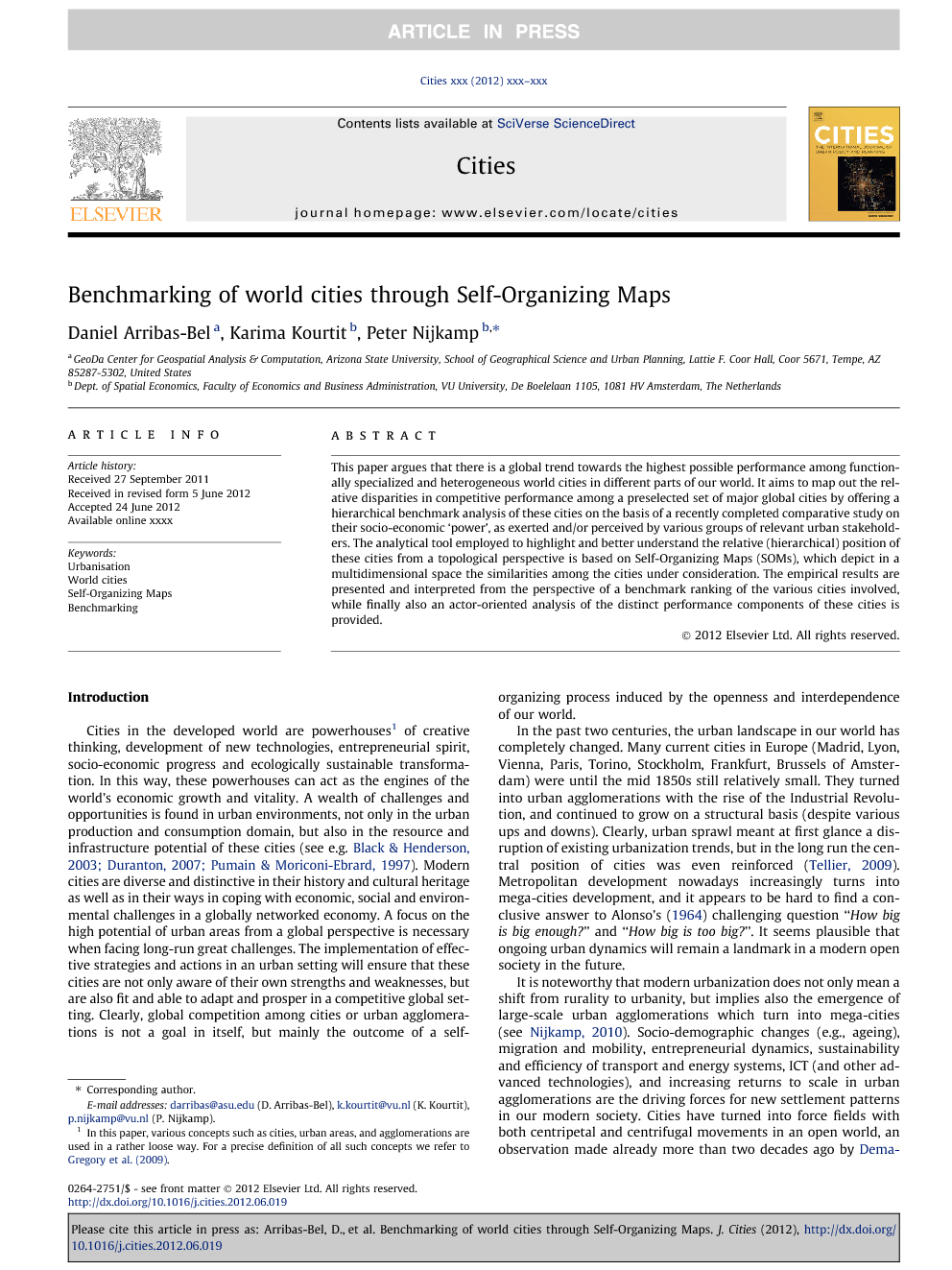 This paper argues that there is a global trend towards the highest possible performance among functionally specialized and heterogeneous world cities in different parts of our world. It aims to map out the relative disparities in competitive performance among a preselected set of major global cities by offering a hierarchical benchmark analysis of these cities on the basis of a recently completed comparative study on their socio-economic ‘power’, as exerted and/or perceived by various groups of relevant urban stakeholders. The analytical tool employed to highlight and better understand the relative (hierarchical) position of these cities from a topological perspective is based on Self-Organizing Maps (SOMs), which depict in a multidimensional space the similarities among the cities under consideration. The empirical results are presented and interpreted from the perspective of a benchmark ranking of the various cities involved, while finally also an actor-oriented analysis of the distinct performance components of these cities is provided.

Cities in the developed world are powerhouses1 of creative thinking, development of new technologies, entrepreneurial spirit, socio-economic progress and ecologically sustainable transformation. In this way, these powerhouses can act as the engines of the world’s economic growth and vitality. A wealth of challenges and opportunities is found in urban environments, not only in the urban production and consumption domain, but also in the resource and infrastructure potential of these cities (see e.g. Black and Henderson, 2003, Duranton, 2007 and Pumain and Moriconi-Ebrard, 1997). Modern cities are diverse and distinctive in their history and cultural heritage as well as in their ways in coping with economic, social and environmental challenges in a globally networked economy. A focus on the high potential of urban areas from a global perspective is necessary when facing long-run great challenges. The implementation of effective strategies and actions in an urban setting will ensure that these cities are not only aware of their own strengths and weaknesses, but are also fit and able to adapt and prosper in a competitive global setting. Clearly, global competition among cities or urban agglomerations is not a goal in itself, but mainly the outcome of a self-organizing process induced by the openness and interdependence of our world. In the past two centuries, the urban landscape in our world has completely changed. Many current cities in Europe (Madrid, Lyon, Vienna, Paris, Torino, Stockholm, Frankfurt, Brussels of Amsterdam) were until the mid 1850s still relatively small. They turned into urban agglomerations with the rise of the Industrial Revolution, and continued to grow on a structural basis (despite various ups and downs). Clearly, urban sprawl meant at first glance a disruption of existing urbanization trends, but in the long run the central position of cities was even reinforced (Tellier, 2009). Metropolitan development nowadays increasingly turns into mega-cities development, and it appears to be hard to find a conclusive answer to Alonso’s (1964) challenging question “How big is big enough?” and “How big is too big?”. It seems plausible that ongoing urban dynamics will remain a landmark in a modern open society in the future. It is noteworthy that modern urbanization does not only mean a shift from rurality to urbanity, but implies also the emergence of large-scale urban agglomerations which turn into mega-cities (see Nijkamp, 2010). Socio-demographic changes (e.g., ageing), migration and mobility, entrepreneurial dynamics, sustainability and efficiency of transport and energy systems, ICT (and other advanced technologies), and increasing returns to scale in urban agglomerations are the driving forces for new settlement patterns in our modern society. Cities have turned into force fields with both centripetal and centrifugal movements in an open world, an observation made already more than two decades ago by Dematteis (1988). Especially the seminal work of Friedman (1986) on world city developments – leading to an urban system as an inter-connected global system with a specific hierarchical functional structure – has inspired much research on globalization and urban development (see also Beaverstock et al., 1999, Knox and McCarthy, 2005, Kourtit et al., 2011, McCann, 2008 and Sassen, 2006). It is noteworthy that there is an increasing interest in the performance of cities from a global perspective. Cities – and increasingly, metropolitan areas – operate indeed more and more on a world scale, in which monopolistic competition and product variety play a central role (see e.g. Abdel-Rahman and Fujita, 1990, Becker & Henderson, 2000, Duranton and Puga, 2000, Glaeser et al., 1992 and Quigley, 1998). These agglomerations act often as economic growth engines and mirror the fact that in an open global space-economy scale advantages are essential, an observation also made in the New Economic Geography.2 A prominent question is now: which agglomeration has the highest socio-economic performance? It has become fashionable to design rankings of cities, often from different angles (e.g., accessibility, wealth, business climate, etc.). There are nowadays numerous attempts to rank the relative performance of cities in our world. The present study aims to test the relevance of a recently developed tool in computational neural network analysis, viz. Self-organizing Maps (SOMs), for ordering and ranking the relative positions of different world cities so as to better understand their performance in a global perspective. The paper is organized as follows. The next section will exemplify some attempts to arrive at a relative comparative ranking of various cities world-wide. Then, the following section will be based on a concise description of the database used in the present study, which originates from the Japanese Institute for Urban Strategies (2010). In a subsequent section, we will concisely outline the mechanism and analytical power of SOMs, while the next sections, will offer the empirical findings followed by an interpretation. The concluding section will offer some retrospective and prospective remarks.

In our modern knowledge society and competitive economy, creative strategies, governance and management are increasingly required for enhancing the global cities’ attractiveness in order to become really competitive in an open world with so many world cities in different parts of our planet. Their attractiveness – in terms of the socio-economic power performance of major global cities – is increasingly regarded as a key factor in maintaining and strengthening their developmental potential in the global competition and in knowledge-based economies. Many major global cities and regions host a wealth of socio-economic attractions and new and innovative activities and facilities and have to compete for the favours of various stakeholders (e.g., talent, business, tourists, investment), both domestically and internationally. To obtain an idea where these metropolitan areas stand and whether various stakeholders should continue to invest in these major global cities, specific marketing tools – e.g., benchmarking analysis and supporting vehicles and tools – have to be used which could help to provide and enhance the attractiveness of these cities. In the context of comparing the attractiveness of major global cities, our empirical study has mapped out the relative disparities among a preselected set of major global cities by developing a benchmark analysis of these cities, on the basis of a recently completed comparative study (GPCI-2010) on 69 individual indicators of a city’s socio-economic ‘power’ performance across six main dimensions in terms of their ‘pluriformity’ characteristics, viz. ‘Economy’, ‘Research & Development’, ‘Cultural Interaction’, ‘Livability’, ‘Ecology & Natural Environment’, and ‘Accessibility’. Furthermore, our study has also identified future challenges and opportunities for global city sustainability policy in an urbanizing world. And finally, an actor-oriented analysis of the various performance items of these cities is given as well. The analytical tool employed to highlight the features of global cities and to encourage various stakeholders to reconsider the attractiveness of these major cities is based on Self-Organizing Maps (SOMs). This facilitates a better understanding of the relative position of 35 major cities in our world and the design of urban strategies – or scenarios – in order to improve the weaknesses identified. We propose the SOM algorithm as a helpful method to study socio-economic multi-dimensional data as well as a useful tool to present complex relationships and patterns to policy makers in a visual way that enhances understanding and knowledge creation. The GPCI dataset is analyzed from three main perspectives: dynamic, function-specific and actor-based. In the first place, we visualize results from both 2009 and 2010 in order to map out the evolution over the statistical space created by the SOM results. We find that, over this period, there has been an isolation of the top four cities, while the vast majority of cities in the middle part of the ranking have maintained similar distances among themselves. In our function-specific analysis, we consider the results for 2010 in more depth; we overlay the original index on top of the visualization to compare both methodologies and carry out a detailed analysis of the map created, translating the location of the cities in the SOM into different profiles, and identifying the main strengths and weaknesses of the cities. In the last part, we use the 2010 results to compare them to the actor-based rankings; this exercise allows us to identify what are the aspects that different actors value most and to see how these views compare to the main function-specific ranking. The main contribution of this paper lies in the enhanced visualization offered by the SOM of the original GPCI results. Although the input data employed in this study are virtually the same, the properties of the new method used allow for a much more appealing presentation that in turn facilitates the analysis and detection of patterns. This leads not only to a confirmation of the main original conclusions from the GPCI study presented in a much more intuitive way, but also to new insights into the dataset such as, for instance, the regional patterns that appear in the grouping of the cities, or the different values put on each dimension depending on the class of actors. In light of these characteristics of the SOM technique, we conclude by hoping that, in the future, more studies in the social sciences will include this kind of approach when analyzing multi-dimensional datasets, particularly when they are geared towards future issues that are of concern to policy-makers and need decision support.