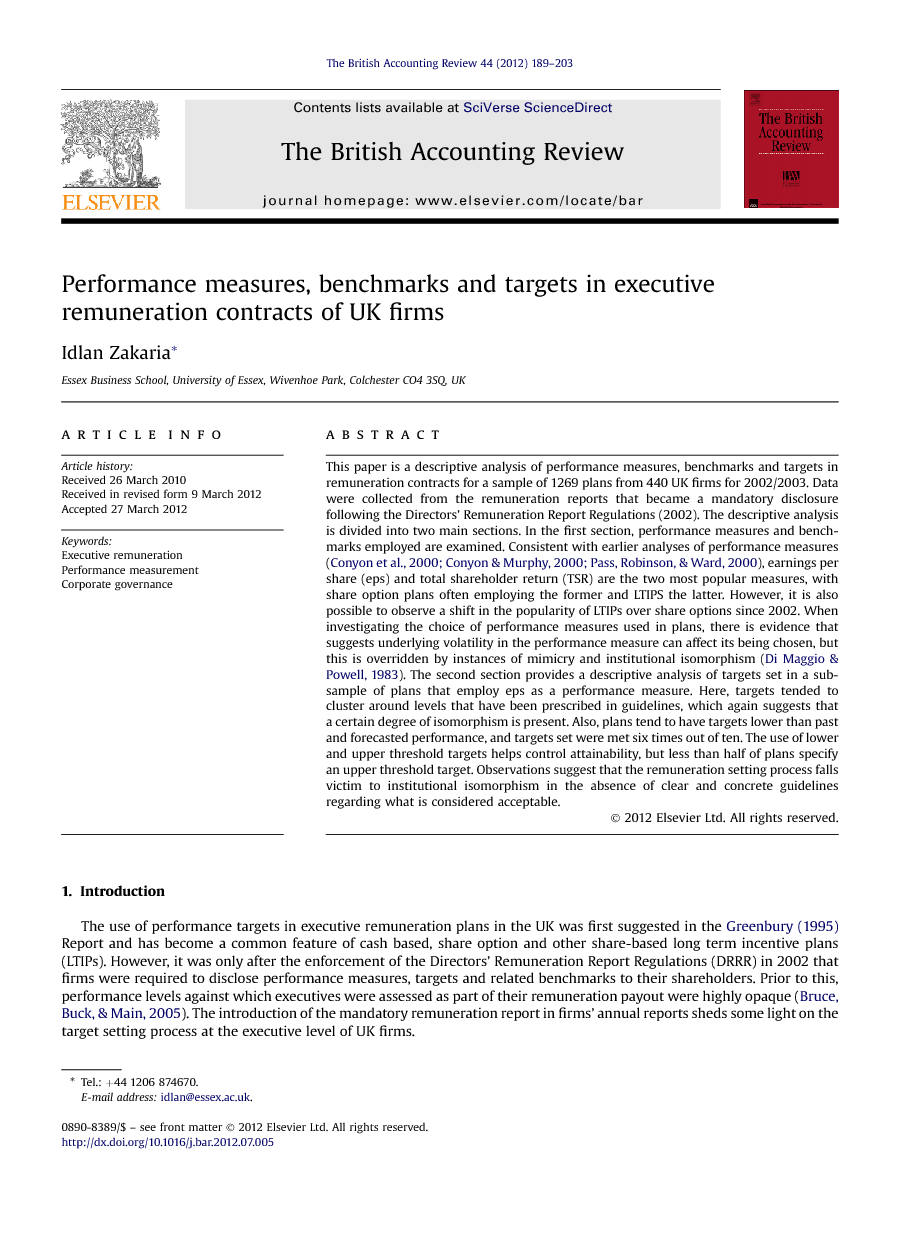 This paper is a descriptive analysis of performance measures, benchmarks and targets in remuneration contracts for a sample of 1269 plans from 440 UK firms for 2002/2003. Data were collected from the remuneration reports that became a mandatory disclosure following the Directors’ Remuneration Report Regulations (2002). The descriptive analysis is divided into two main sections. In the first section, performance measures and benchmarks employed are examined. Consistent with earlier analyses of performance measures (Conyon et al., 2000, Conyon and Murphy, 2000 and Pass et al., 2000), earnings per share (eps) and total shareholder return (TSR) are the two most popular measures, with share option plans often employing the former and LTIPS the latter. However, it is also possible to observe a shift in the popularity of LTIPs over share options since 2002. When investigating the choice of performance measures used in plans, there is evidence that suggests underlying volatility in the performance measure can affect its being chosen, but this is overridden by instances of mimicry and institutional isomorphism (Di Maggio & Powell, 1983). The second section provides a descriptive analysis of targets set in a sub-sample of plans that employ eps as a performance measure. Here, targets tended to cluster around levels that have been prescribed in guidelines, which again suggests that a certain degree of isomorphism is present. Also, plans tend to have targets lower than past and forecasted performance, and targets set were met six times out of ten. The use of lower and upper threshold targets helps control attainability, but less than half of plans specify an upper threshold target. Observations suggest that the remuneration setting process falls victim to institutional isomorphism in the absence of clear and concrete guidelines regarding what is considered acceptable.

The aim of this study was primarily to provide a descriptive analysis of performance measures and target levels in executive remuneration plans of UK firms. Existing descriptive evidence is available in the academic literature for plans up to 1998. This study updates the observation for plans up to 2002. Key findings of this study are as follows: firstly, executive remuneration structures have not changed over the previous twenty years, but the weightings between the use of share option plans and long term incentive plans have changed quite dramatically, with the former being popular in the 1990s and the latter increasingly popular in the 2000s as the use of share options declined. Conyon, Fernandes, et al. (2011) and Conyon, Core, et al. (2011) and Main (2011) both attribute this to changes in the political economy, where changes in tax regulations, corporate governance guidelines and accounting standards influence firms’ preference for restricted shares over share options. Secondly, specific patterns emerge in the use of performance measures in the plans. Consistent with earlier evidence, EPS and TSR are the most popular performance measures used by firms in executive remuneration plans. EPS growth targets are commonly benchmarked against growth in RPI, while TSR are commonly measured relative to the performance of a chosen peer group. This is attributed to the phenomenon of mimetic isomorphism, where the absence of clear guidelines results in firms mimicking the practice of others. The possibility that firms choose performance measures based on a preference for the performance measure with less underlying volatility, as argued by Lambert and Larcker (1987) and Sloan (1993), is also tested. While firms opt not to use TSR measures in performance contracts when there are higher levels of volatility in TSR returns prior to plan inception, this relationship disappears when the model is controlled for plan type. This lack of variation within plan types suggests that mimicry overrides economic motivations in choosing performance measures. Thirdly, when studying earnings per share growth targets, clustering around target levels of RPI + 2% p.a. to RPI + 3.99% p. a. is observed, with three-quarters of targets being set within this range. Again, this can be attributed to mimetic isomorphism, in particular coercive isomorphism, as guidelines set by the ABI specify a minimum target of RPI + 2% p.a. Furthermore, only 22% have targets set greater than RPI + 4% per annum and 6% of plans have targets set greater than RPI + 5% p.a. Finally, with regards to target attainment, on average firms set lower threshold targets that were achieved during all years reporting positive growth, with actual performance outperforming lower threshold targets by at least 20%. This is tempered by the use of upper threshold targets in a selection of plans, whereby these targets are surpassed in three of the ten years analysed. The actual remuneration setting process remains opaque and exclusive. However, as more disclosures are being made, more analysis can be performed to allow us to shed light on the matter. Observations from disclosures reveal certain patterns, which suggest that there is a high degree of mimetic isomorphism when it comes to setting targets. This does not necessarily imply gaming on behalf of the firm, but rather an outcome of a process that lacks structure and guidelines in determining appropriate standards.