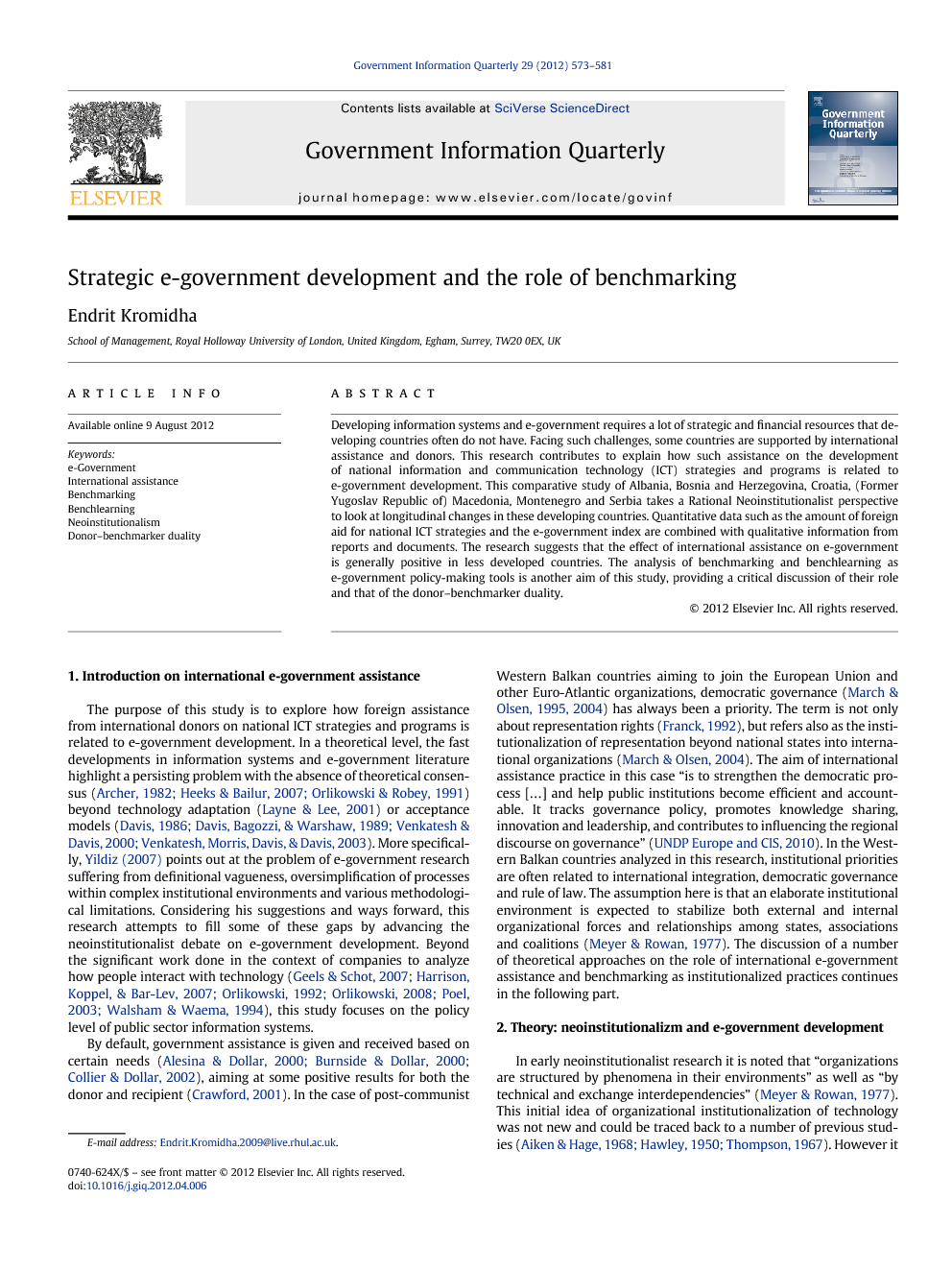 Developing information systems and e-government requires a lot of strategic and financial resources that developing countries often do not have. Facing such challenges, some countries are supported by international assistance and donors. This research contributes to explain how such assistance on the development of national information and communication technology (ICT) strategies and programs is related to e-government development. This comparative study of Albania, Bosnia and Herzegovina, Croatia, (Former Yugoslav Republic of) Macedonia, Montenegro and Serbia takes a Rational Neoinstitutionalist perspective to look at longitudinal changes in these developing countries. Quantitative data such as the amount of foreign aid for national ICT strategies and the e-government index are combined with qualitative information from reports and documents. The research suggests that the effect of international assistance on e-government is generally positive in less developed countries. The analysis of benchmarking and benchlearning as e-government policy-making tools is another aim of this study, providing a critical discussion of their role and that of the donor–benchmarker duality.

The purpose of this study is to explore how foreign assistance from international donors on national ICT strategies and programs is related to e-government development. In a theoretical level, the fast developments in information systems and e-government literature highlight a persisting problem with the absence of theoretical consensus (Archer, 1982, Heeks and Bailur, 2007 and Orlikowski and Robey, 1991) beyond technology adaptation (Layne & Lee, 2001) or acceptance models (Davis, 1986, Davis et al., 1989, Venkatesh and Davis, 2000 and Venkatesh et al., 2003). More specifically, Yildiz (2007) points out at the problem of e-government research suffering from definitional vagueness, oversimplification of processes within complex institutional environments and various methodological limitations. Considering his suggestions and ways forward, this research attempts to fill some of these gaps by advancing the neoinstitutionalist debate on e-government development. Beyond the significant work done in the context of companies to analyze how people interact with technology (Geels and Schot, 2007, Harrison et al., 2007, Orlikowski, 1992, Orlikowski, 2008, Poel, 2003 and Walsham and Waema, 1994), this study focuses on the policy level of public sector information systems. By default, government assistance is given and received based on certain needs (Alesina and Dollar, 2000, Burnside and Dollar, 2000 and Collier and Dollar, 2002), aiming at some positive results for both the donor and recipient (Crawford, 2001). In the case of post-communist Western Balkan countries aiming to join the European Union and other Euro-Atlantic organizations, democratic governance (March and Olsen, 1995 and March and Olsen, 2004) has always been a priority. The term is not only about representation rights (Franck, 1992), but refers also as the institutionalization of representation beyond national states into international organizations (March & Olsen, 2004). The aim of international assistance practice in this case “is to strengthen the democratic process […] and help public institutions become efficient and accountable. It tracks governance policy, promotes knowledge sharing, innovation and leadership, and contributes to influencing the regional discourse on governance” (UNDP Europe and CIS, 2010). In the Western Balkan countries analyzed in this research, institutional priorities are often related to international integration, democratic governance and rule of law. The assumption here is that an elaborate institutional environment is expected to stabilize both external and internal organizational forces and relationships among states, associations and coalitions (Meyer & Rowan, 1977). The discussion of a number of theoretical approaches on the role of international e-government assistance and benchmarking as institutionalized practices continues in the following part.

International assistance on ICT strategic development could have a limited but positive impact on overall e-government levels. As this research suggests, this could be especially true in less developed countries, similar to those in the Western Balkans studied here. More developed countries show a decreasing marginal progress as they have passed the early stages of e-government reforms. In this context, the starting inequality between countries compared, is an important issue identified in this research that need to be addressed carefully before driving any conclusion on the efficiency of international e-government assistance. From a neoinstitutionalist perspective, international e-government assistance on strategic initiatives and benchmarking are strongly related to long-term joint interests between donor organizations and developing countries. The RNI discourse and focus of research move from the international to the national level and back. Governments in this process have to take important strategic decisions, being in between the international and national actors and forces with predetermined goals and interests. It is at this stage where conflicting institutional forces that shape policy-making processes are identified by looking at the application of strategic e-initiatives. A major role in this case is played by international organizations with multifaceted involvement in the strategy–implementation–evaluation cycle of e-government development. This study addresses this type of involvement as the donor–benchmarker duality, critically suggesting the need to separate from benchmarking indexes external influences from international organizations that do the benchmarking, but are also involved with projects in the countries they rate. Long term progress and benchlearning remains one of the biggest challenges, both for donors and recipients. It is generally implied that countries receiving international assistance will have at a certain point to develop their own capabilities based on the lessons learned. The challenge remains in putting the benchmarking lessons into practice by adapting a more holistic local approach to e-government policy-making and evaluation, considering also the regional context. ICT and e-government national strategies are the first step towards long lasting reforms where international involvement could have an important influence, but more important is the ability of countries to learn how to evaluate their own progress. Setting up local structures of e-government evaluation is not an unnecessary duplication of donors' reports for the projects they finance, but an important strategic step towards sustainability and independence from international aid that still needs to be institutionalized.