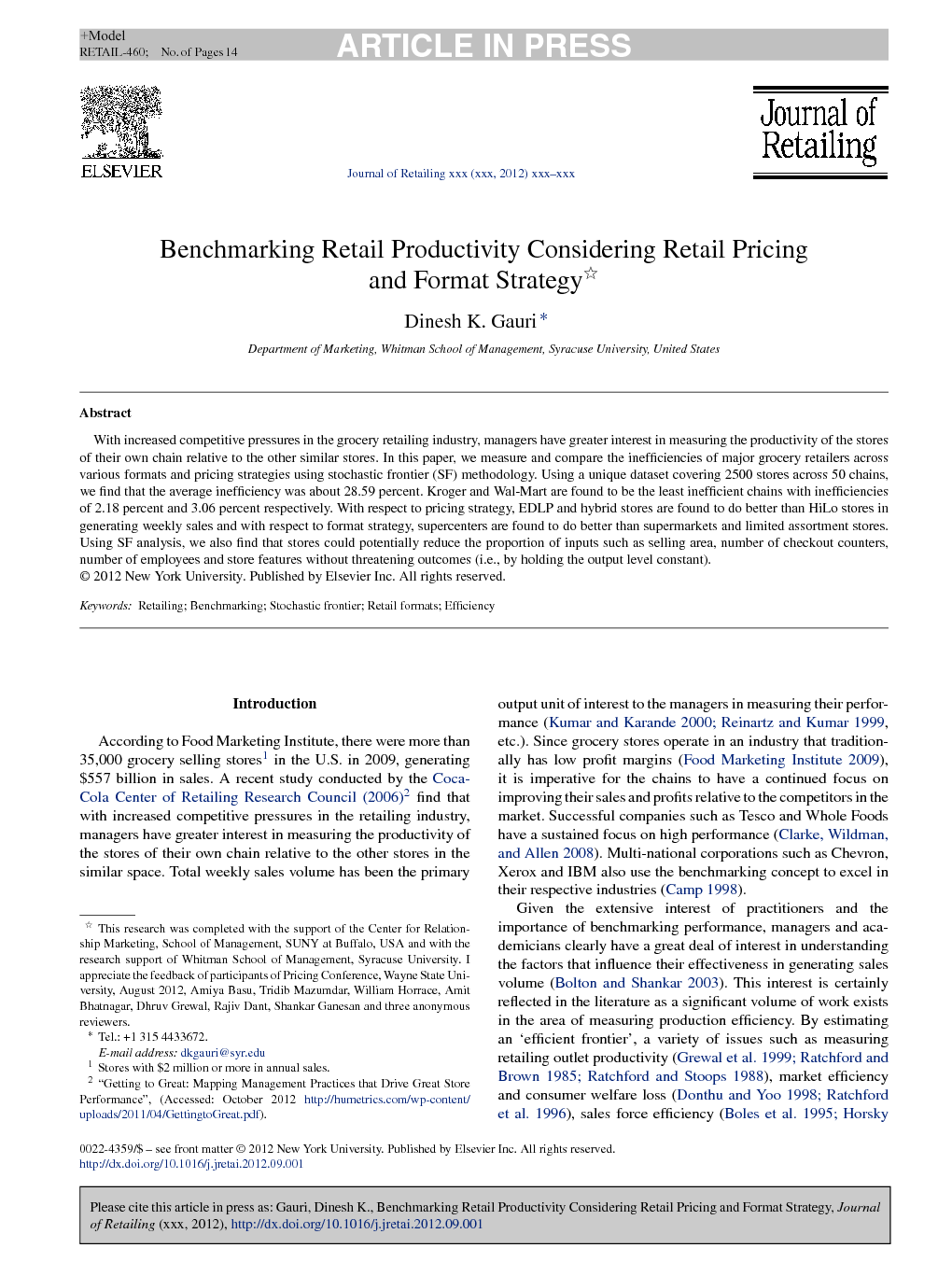 With increased competitive pressures in the grocery retailing industry, managers have greater interest in measuring the productivity of the stores of their own chain relative to the other similar stores. In this paper, we measure and compare the inefficiencies of major grocery retailers across various formats and pricing strategies using stochastic frontier (SF) methodology. Using a unique dataset covering 2500 stores across 50 chains, we find that the average inefficiency was about 28.59 percent. Kroger and Wal-Mart are found to be the least inefficient chains with inefficiencies of 2.18 percent and 3.06 percent respectively. With respect to pricing strategy, EDLP and hybrid stores are found to do better than HiLo stores in generating weekly sales and with respect to format strategy, supercenters are found to do better than supermarkets and limited assortment stores. Using SF analysis, we also find that stores could potentially reduce the proportion of inputs such as selling area, number of checkout counters, number of employees and store features without threatening outcomes (i.e., by holding the output level constant).

According to Food Marketing Institute, there were more than 35,000 grocery selling stores1 in the U.S. in 2009, generating $557 billion in sales. A recent study conducted by the Coca-Cola Center of Retailing Research Council (2006)2 find that with increased competitive pressures in the retailing industry, managers have greater interest in measuring the productivity of the stores of their own chain relative to the other stores in the similar space. Total weekly sales volume has been the primary output unit of interest to the managers in measuring their performance (Kumar and Karande, 2000 and Reinartz and Kumar, 1999, etc.). Since grocery stores operate in an industry that traditionally has low profit margins (Food Marketing Institute 2009), it is imperative for the chains to have a continued focus on improving their sales and profits relative to the competitors in the market. Successful companies such as Tesco and Whole Foods have a sustained focus on high performance (Clarke, Wildman, and Allen 2008). Multi-national corporations such as Chevron, Xerox and IBM also use the benchmarking concept to excel in their respective industries (Camp 1998). Given the extensive interest of practitioners and the importance of benchmarking performance, managers and academicians clearly have a great deal of interest in understanding the factors that influence their effectiveness in generating sales volume (Bolton and Shankar 2003). This interest is certainly reflected in the literature as a significant volume of work exists in the area of measuring production efficiency. By estimating an ‘efficient frontier’, a variety of issues such as measuring retailing outlet productivity (Grewal et al., 1999, Ratchford and Brown, 1985 and Ratchford and Stoops, 1988), market efficiency and consumer welfare loss (Donthu and Yoo, 1998 and Ratchford et al., 1996), sales force efficiency (Boles et al., 1995 and Horsky and Nelson, 1996), channel productivity (Bultez and Parsons 1998), and resource allocation (Chebat et al., 1994, Donthu et al., 2005 and Luo and Donthu, 2005) can be studied. While there exist a considerable literature on retail productivity, most of this is concerned with macro issues such as productivity changes in the sector, comparing ownership types and isolating contextual (external, environmental) variables that affect productivity (Ratchford 2011). In a recent survey of literature, Ratchford (2011) also notes that “Relatively few studies have been aimed at comparing the productivity of individual stores as a means of benchmarking performance and developing marketing strategies.” Only a few studies ( Gauri et al., 2009 and Grewal et al., 1999, etc.) are concerned with exploring the productivity impact of strategic (“internal”) variables for which retail managers’ are responsible. While many retail chains maximize their distribution coverage across regions, individual stores vary tremendously in terms of their physical characteristics such as the selling area, number of employees, in-store services provided, products offered (Gauri, Pauler, and Trivedi 2009). In addition, the external environment in which the stores operate can vary significantly and could influence the performance of individual stores depending on the market and trade area characteristics. Research dealing with such store-specific performance issues is somewhat scarce (Gauri et al., 2009, Grewal et al., 1999 and Ratchford, 2011). Using the frequent shopper data at a more disaggregate (block group) level, Gauri, Pauler, and Trivedi (2009) perform a detailed analysis of factors affecting demand at the block group level and develop benchmark measures of expected demand at each store. Even though they compare their model estimates with a stochastic frontier model, they use data of stores from a single chain and hence are not able to comment on anything related to differences in performance of stores across multiple chains. Our study attempts to fill this gap in the literature by using data from multiple chains. It has also been well known that grocery selling stores follow a combination of format and pricing strategies to serve the needs of various consumer segments. The predominant formats are supermarkets, supercenters, and limited assortment stores, and the main pricing strategies observed are EDLP, Hi-Lo and hybrid3 (Bhatnagar and Ratchford, 2004, Gauri et al., 2008 and Hoch et al., 1994). Most major retailers use a variety of combinations of pricing and format strategy combinations to occupy several niche markets in various geographical regions. For example, Food Lion, Supervalu and Wal-Mart all adopt a multi-banner strategy4 in different markets (Gauri, Trivedi, and Grewal 2008). In our study, we consider both the pricing and format strategies of the store. The contributions of this study are as follows. First, we develop a benchmarking model that includes the impact of both internal (discretionary) and exogenous (non-discretionary) inputs on influencing sales volume as the output. We consider the impact of pricing and format strategy (separately as well as jointly) followed by stores belonging to multiple chains. Second, using a panel level stochastic frontier method, our research identifies the impact of each input on enhancing the sales volume and offers an effective way to compare the best performers, thus presenting a way to benchmark performance. The scope of our data covering a wide range of retailers (about 2500 stores belonging to 50 different chains) located in the north-eastern part of United States also lends credence to the generalizability of our results to a greater geographic area. In the next section, we discuss the relevant frontier model based on research work that we draw upon for our empirical model. Subsequent sections deal with the empirical illustration with a description of data and variables and empirical results. Finally, we conclude with managerial implications and a general discussion of the model, its contributions and limitations.

Benchmarking performance across stores and chains is difficult but important task for managers. Sales and sales per square foot are the traditional measures used to accomplish this comparison. Such a simple comparison of these measures does not provide the true picture as it does not take into consideration the internal inputs and exogenous environment that the stores operate in. This makes the benchmarking based on these measures fundamentally flawed, thus making the benchmarking issue even more challenging. In this paper, we measure and compare the inefficiencies of major grocery retailers across various formats and pricing strategies using stochastic frontier methodology. Using this method, we are able to estimate the overall inefficiency of each store by decomposing the error term into random error and managerial inefficiency. Doing so may help in removing much of the bias due to measurement error and help in improving the accuracy of all parameter estimates (Luo and Donthu 2005). The inefficiency computed by estimation can be used to benchmark the performance of each store given the internal store specific and other exogenous inputs. Our findings have various implications for chain managers. By developing a model that recognizes the importance of various internal store features and exogenous inputs from the environment in which the stores operate in, we offer the retailer a productivity model that can be used to benchmark sales performance of chain stores. Managers can reduce or increase their expenditure on those features that affect the output and can make optimum use of the resources. Across the 50 chains covering 2500 stores, we find that the average inefficiency was about 28.59 percent. The lowest value of inefficiency is obtained for the model that includes both pricing and format strategy variables, emphasizing the importance of these variables in an integrated manner as suggested by previous work also (Gauri, Trivedi, and Grewal 2008). With respect to pricing strategy, EDLP and hybrid stores are found to do better than HiLo stores in generating weekly sales and with respect to format strategy, supercenters are found to do better than supermarkets and limited assortment stores. Using the results of our stochastic frontier model, we also find that stores could benefit by considering reducing their investment in various internal input factors, without threatening outcomes (i.e., by holding the output level constant), if they wish to improve their productivity relative to the other stores. We find that stores with larger selling area, more check-out counters and the one located closer to competition had the best efficiency. Store managers should find this information useful while making store location decisions.