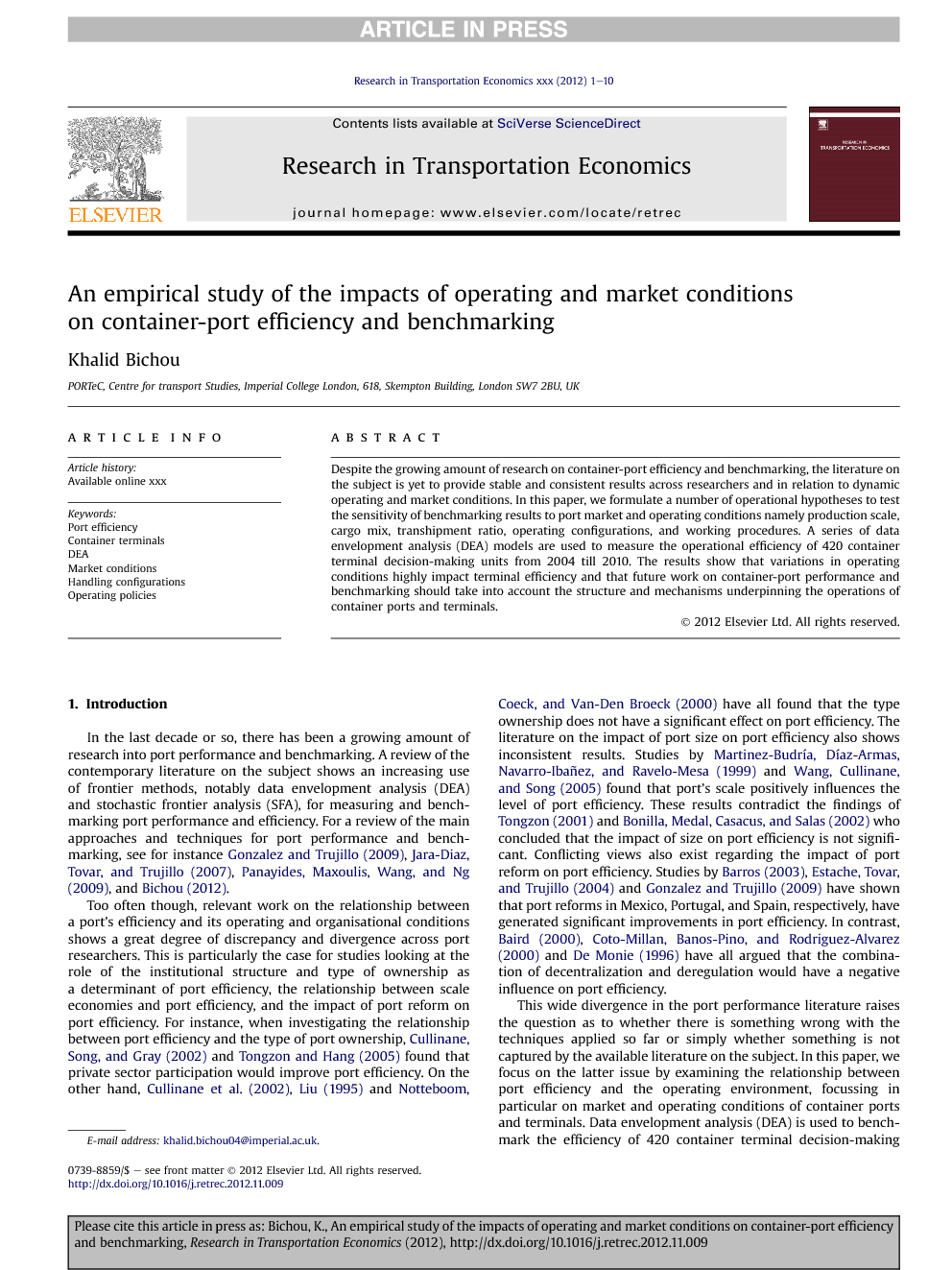 Despite the growing amount of research on container-port efficiency and benchmarking, the literature on the subject is yet to provide stable and consistent results across researchers and in relation to dynamic operating and market conditions. In this paper, we formulate a number of operational hypotheses to test the sensitivity of benchmarking results to port market and operating conditions namely production scale, cargo mix, transhipment ratio, operating configurations, and working procedures. A series of data envelopment analysis (DEA) models are used to measure the operational efficiency of 420 container terminal decision-making units from 2004 till 2010. The results show that variations in operating conditions highly impact terminal efficiency and that future work on container-port performance and benchmarking should take into account the structure and mechanisms underpinning the operations of container ports and terminals.

In the last decade or so, there has been a growing amount of research into port performance and benchmarking. A review of the contemporary literature on the subject shows an increasing use of frontier methods, notably data envelopment analysis (DEA) and stochastic frontier analysis (SFA), for measuring and benchmarking port performance and efficiency. For a review of the main approaches and techniques for port performance and benchmarking, see for instance Gonzalez and Trujillo (2009), Jara-Diaz, Tovar, and Trujillo (2007), Panayides, Maxoulis, Wang, and Ng (2009), and Bichou (2012). Too often though, relevant work on the relationship between a port's efficiency and its operating and organisational conditions shows a great degree of discrepancy and divergence across port researchers. This is particularly the case for studies looking at the role of the institutional structure and type of ownership as a determinant of port efficiency, the relationship between scale economies and port efficiency, and the impact of port reform on port efficiency. For instance, when investigating the relationship between port efficiency and the type of port ownership, Cullinane, Song, and Gray (2002) and Tongzon and Hang (2005) found that private sector participation would improve port efficiency. On the other hand, Cullinane et al. (2002), Liu (1995) and Notteboom, Coeck, and Van-Den Broeck (2000) have all found that the type ownership does not have a significant effect on port efficiency. The literature on the impact of port size on port efficiency also shows inconsistent results. Studies by Martinez-Budría, Díaz-Armas, Navarro-Ibañez, and Ravelo-Mesa (1999) and Wang, Cullinane, and Song (2005) found that port's scale positively influences the level of port efficiency. These results contradict the findings of Tongzon (2001) and Bonilla, Medal, Casacus, and Salas (2002) who concluded that the impact of size on port efficiency is not significant. Conflicting views also exist regarding the impact of port reform on port efficiency. Studies by Barros (2003), Estache, Tovar, and Trujillo (2004) and Gonzalez and Trujillo (2009) have shown that port reforms in Mexico, Portugal, and Spain, respectively, have generated significant improvements in port efficiency. In contrast, Baird (2000), Coto-Millan, Banos-Pino, and Rodriguez-Alvarez (2000) and De Monie (1996) have all argued that the combination of decentralization and deregulation would have a negative influence on port efficiency. This wide divergence in the port performance literature raises the question as to whether there is something wrong with the techniques applied so far or simply whether something is not captured by the available literature on the subject. In this paper, we focus on the latter issue by examining the relationship between port efficiency and the operating environment, focussing in particular on market and operating conditions of container ports and terminals. Data envelopment analysis (DEA) is used to benchmark the efficiency of 420 container terminal decision-making units (DMUs), and test whether changes in certain operating conditions have an impact on port efficiency. The remainder of the paper is structured as follows. Section 2 highlights the importance of market and operating conditions in shaping port efficiency, focussing in particular on the limitations of the container-port literature for overlooking the variations in market conditions and operating configurations. In Section 3, we present research hypotheses, formalise DEA models, and specify the sampling frame variables' selection. Section 4 presents the empirical results for testing and analysis, while Section 5 concludes with a summary and suggestions for future research.

Although extensive literature has addressed container-port performance and benchmarking, few studies have attempted to incorporate the variations in operating and market conditions. In this study, various DEA models were used to benchmark the efficiency of 420 container terminal DMUs and test the sensitivity of the benchmarking results to various market and operating conditions namely production scale, cargo mix, transhipment ratio, operating configurations, and working procedures. The analysis of the relationship between scale of production and operational efficiency reveals that a large proportion of terminals exhibit increasing returns to scale properties, which asserts that the container terminal industry clearly depicts a VRS production technology. The analysis also shows that the larger terminals and those investing in new facilities tend to depict decreasing returns to scale. The relationships between productive efficiency and the proportion of cargo mix show that market differences have a direct effect on terminal efficiency. Terminals with high proportion of transhipment, FEU, and/or empty containers tend to yield higher efficiency scores than their other counterparts. This suggests that both exogenous factors and the nature of the market served can have a significant effect on terminal's efficiency ranking, even for terminals with similar levels of operational efficiency. Operating configurations also have a direct impact on terminal efficiency with terminals operating on automated systems tend to depict the highest efficiency scores. In a similar vein, operating policies and work procedures were also found to have an influence on productive efficiency. In particular, the yard storage policy and the gate operating procedure seem to have, each, a direct impact on terminal's efficiency. This paper provides an empirical account of the impact of operating and market conditions on container-port efficiency. The framework and methods developed in this paper could also serve as a guideline to researchers for capturing and incorporating the differences in market conditions and operating configurations when attempting to benchmark and analyse container-port efficiency. In a similar vein, the results of this study may serve both operational and policy decision-making on improving operating and working procedures across container ports and terminals.