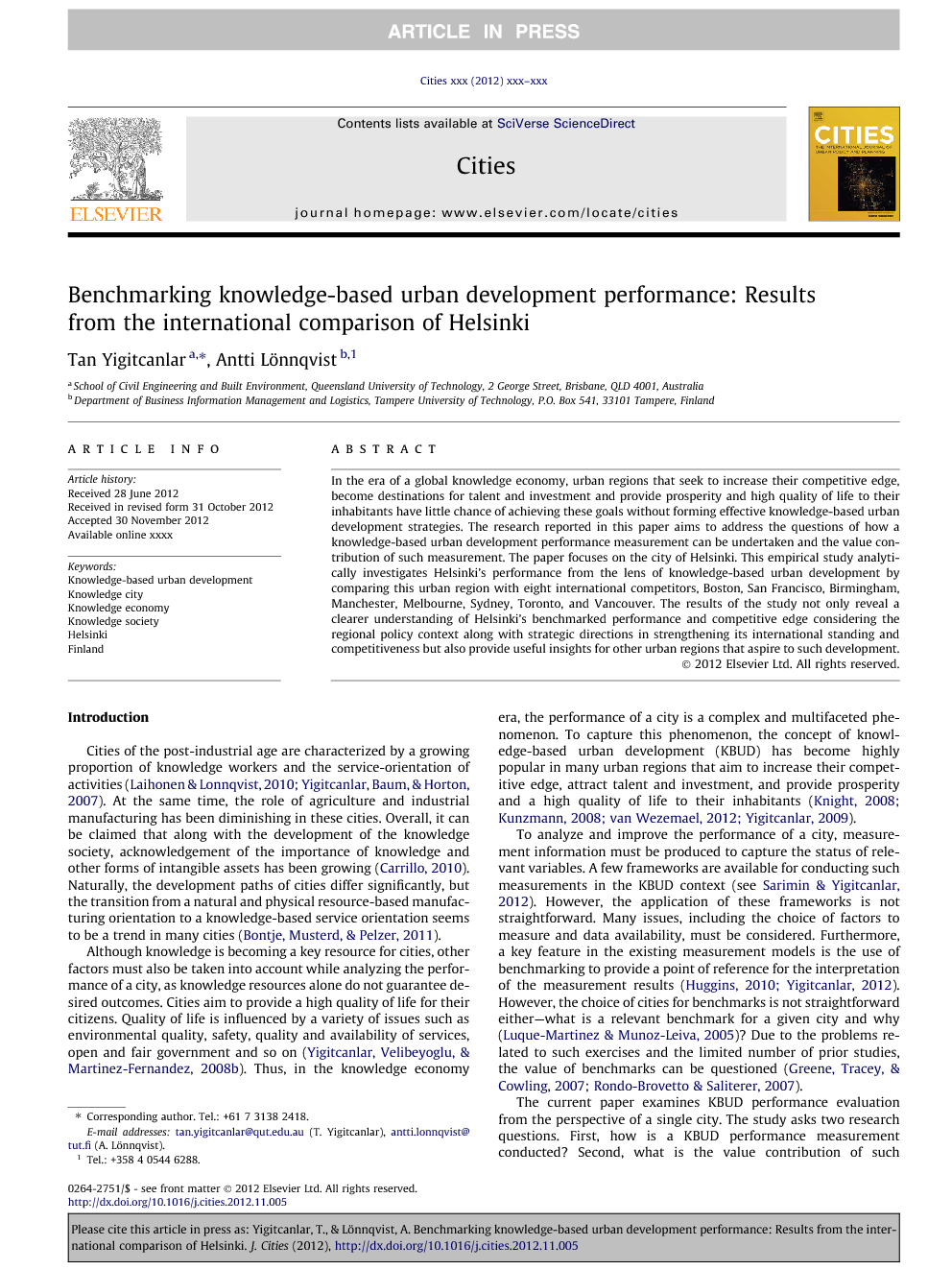 In the era of a global knowledge economy, urban regions that seek to increase their competitive edge, become destinations for talent and investment and provide prosperity and high quality of life to their inhabitants have little chance of achieving these goals without forming effective knowledge-based urban development strategies. The research reported in this paper aims to address the questions of how a knowledge-based urban development performance measurement can be undertaken and the value contribution of such measurement. The paper focuses on the city of Helsinki. This empirical study analytically investigates Helsinki’s performance from the lens of knowledge-based urban development by comparing this urban region with eight international competitors, Boston, San Francisco, Birmingham, Manchester, Melbourne, Sydney, Toronto, and Vancouver. The results of the study not only reveal a clearer understanding of Helsinki’s benchmarked performance and competitive edge considering the regional policy context along with strategic directions in strengthening its international standing and competitiveness but also provide useful insights for other urban regions that aspire to such development.

Cities of the post-industrial age are characterized by a growing proportion of knowledge workers and the service-orientation of activities (Laihonen and Lonnqvist, 2010 and Yigitcanlar et al., 2007). At the same time, the role of agriculture and industrial manufacturing has been diminishing in these cities. Overall, it can be claimed that along with the development of the knowledge society, acknowledgement of the importance of knowledge and other forms of intangible assets has been growing (Carrillo, 2010). Naturally, the development paths of cities differ significantly, but the transition from a natural and physical resource-based manufacturing orientation to a knowledge-based service orientation seems to be a trend in many cities (Bontje, Musterd, & Pelzer, 2011). Although knowledge is becoming a key resource for cities, other factors must also be taken into account while analyzing the performance of a city, as knowledge resources alone do not guarantee desired outcomes. Cities aim to provide a high quality of life for their citizens. Quality of life is influenced by a variety of issues such as environmental quality, safety, quality and availability of services, open and fair government and so on (Yigitcanlar, Velibeyoglu, & Martinez-Fernandez, 2008b). Thus, in the knowledge economy era, the performance of a city is a complex and multifaceted phenomenon. To capture this phenomenon, the concept of knowledge-based urban development (KBUD) has become highly popular in many urban regions that aim to increase their competitive edge, attract talent and investment, and provide prosperity and a high quality of life to their inhabitants (Knight, 2008, Kunzmann, 2008, van Wezemael, 2012 and Yigitcanlar, 2009). To analyze and improve the performance of a city, measurement information must be produced to capture the status of relevant variables. A few frameworks are available for conducting such measurements in the KBUD context (see Sarimin & Yigitcanlar, 2012). However, the application of these frameworks is not straightforward. Many issues, including the choice of factors to measure and data availability, must be considered. Furthermore, a key feature in the existing measurement models is the use of benchmarking to provide a point of reference for the interpretation of the measurement results (Huggins, 2010 and Yigitcanlar, 2012). However, the choice of cities for benchmarks is not straightforward either—what is a relevant benchmark for a given city and why (Luque-Martinez & Munoz-Leiva, 2005)? Due to the problems related to such exercises and the limited number of prior studies, the value of benchmarks can be questioned (Greene et al., 2007 and Rondo-Brovetto and Saliterer, 2007). The current paper examines KBUD performance evaluation from the perspective of a single city. The study asks two research questions. First, how is a KBUD performance measurement conducted? Second, what is the value contribution of such measurement? We aim to contribute to the prior literature on KBUD analysis by providing a detailed description of the measurement process and findings and critically evaluating the value of the new information. In this study, the focal city is Helsinki, Finland, i.e., Helsinki metropolitan area. Helsinki is an interesting example of a knowledge city because it has accomplished many KBUD achievements and currently stands out as a thriving urban region in many international comparisons concerning knowledge economy adoption, knowledge city formation, competitiveness, R&D, education investment, knowledge generation, and quality of life and place (Vaattovaara, 2009). The principal factor in Helsinki’s accomplishments has been the development of an innovative capacity through the creation of agglomerations of knowledge-intensive industries (Abetti, 2004). This innovative capacity originated from the strategic actions taken in the early 1990s at the national level (i.e., Finland as a knowledge economy) and explicit KBUD policies that were developed and persistently implemented in Helsinki (i.e., technopoles as urban strategies to build high-tech cities) (Pelkonen, 2005 and van den Berg et al., 2005). Helsinki became a frontrunner in knowledge-based activities due to its early involvement with such activities. Across the globe, KBUD strategies have only recently been formulated under this rubric. Previously, strategies such as innovation milieus were developed; however, they were not comprehensive or citywide (van Winden, van den Berg, & Pol, 2007). Although Helsinki’s KBUD achievements are notable, the urban region is not immune to the impacts of global pressures and crises (Bontje et al., 2011). Helsinki encounters several serious challenges. Firstly, as mentioned in the OECD Report (OECD, 2002), Finland in general and Helsinki in particular lack a focused strategy of economic diversification (such as developing ICT activities beyond the mobile phone technology cluster scope) for securing long-term competitiveness. Today, a decade after this report, the diversification of knowledge economy activities is critical to Helsinki. This is primarily because Nokia, which houses its headquarters and main facilities in Helsinki, recently lost its leadership in the world mobile technology solutions. Another major challenge that Helsinki faces is the impacts of the global financial crisis, with the rapid spread of various economic and social problems across the Euro zone (Claessens, Dell’Ariccia, Igan, & Laeven, 2010). The impact of both of these challenges resulted in large employee redundancies and an increased risk of losing the competitive edge, including Nokia. The present paper is structured as follows. After reviewing the literature on KBUD, a background on the development context and conditions of Helsinki is presented. This is followed by a report of the empirical analysis undertaken to scrutinize Helsinki’s KBUD in comparison to eight international competitor urban regions and the results of the analyses. Then, the paper presents and discusses the key lessons learned. The paper concludes by stressing the value contribution of this benchmarking exercise and highlighting the insights on how to apply KBUD performance measurement.

Based on a review of the literature, in the era of knowledge economy, urban regions must not only adjust their local economies (business climate) but also invest in their society (people climate), environment (spatial climate) and institutions (governance climate) (i.e., the prominent pillars of KBUD) to become competitive in the global arena. In this study, a KBUD analysis was carried out to evaluate the performance of Helsinki in contrast to eight prosperous cities. The purpose of the study was not only to learn about the KBUD status of Helsinki but also to focus on the performance measurement and benchmarking process. In particular, we examined the following two aspects: how to carry out KBUD performance measurement given the well-known difficulties and limitations and the value contribution of such measurements. First, the empirical measurement results were in line with previous studies and presented new findings. The results of this empirical research, however, should not be regarded as the ‘absolute truth’ of Helsinki’s KBUD. Rather, it should be considered as an indication of the status of key KBUD variables and as a trigger for debate, further analysis and learning. Second, the carefully described performance measurement process shows how such measurements can be undertaken and which of the key phases should be included in the process. This can be used as a basis for the design of similar studies or more pragmatic analyses and for the further development of the measurement methodology. Third, the value of KBUD performance measurement was evaluated from two perspectives. At a general level, the key strength is that the indicator system makes it possible to present and analyze complex phenomena, such as KBUD of an urban region in a compact manner, and provide the big picture view. Benchmarking also provides a point of reference to the results. Furthermore, as discussed above, the analysis proved valuable in understanding Helsinki’s KBUD performance. Thus, we conclude that the KBUD/AM process is applicable and provides value for analysis. The measurement process requires continued development for further improvement. This point is not only related to the KBUD/AM approach, but more generally to the ongoing debate on the usefulness of regional benchmarking. Although there are significant challenges in operationalizing some of the key concepts and interpreting the measurement results, there is a lack of an alternative approach. Thus, there is a need for further applications and experiments with regional benchmarking, and the related critical discussion about learning experiences, with the aim of developing more applicable models and tools in the near future.