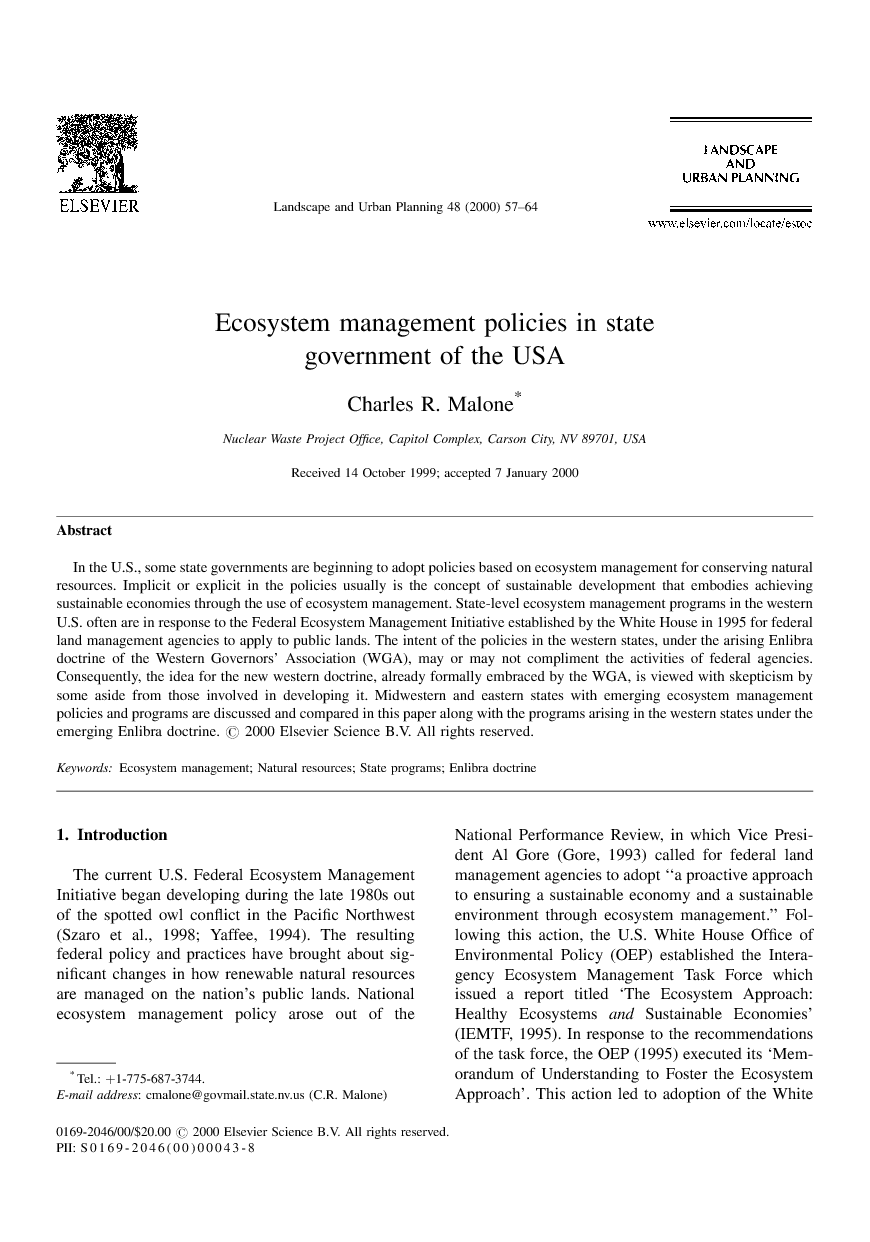 In the U.S., some state governments are beginning to adopt policies based on ecosystem management for conserving natural resources. Implicit or explicit in the policies usually is the concept of sustainable development that embodies achieving sustainable economies through the use of ecosystem management. State-level ecosystem management programs in the western U.S. often are in response to the Federal Ecosystem Management Initiative established by the White House in 1995 for federal land management agencies to apply to public lands. The intent of the policies in the western states, under the arising Enlibra doctrine of the Western Governors’ Association (WGA), may or may not compliment the activities of federal agencies. Consequently, the idea for the new western doctrine, already formally embraced by the WGA, is viewed with skepticism by some aside from those involved in developing it. Midwestern and eastern states with emerging ecosystem management policies and programs are discussed and compared in this paper along with the programs arising in the western states under the emerging Enlibra doctrine.

The current U.S. Federal Ecosystem Management Initiative began developing during the late 1980s out of the spotted owl conflict in the Pacific Northwest (Szaro et al., 1998 and Yaffee, 1994). The resulting federal policy and practices have brought about significant changes in how renewable natural resources are managed on the nation’s public lands. National ecosystem management policy arose out of the National Performance Review, in which Vice President Al Gore (Gore, 1993) called for federal land management agencies to adopt “a proactive approach to ensuring a sustainable economy and a sustainable environment through ecosystem management.” Following this action, the U.S. White House Office of Environmental Policy (OEP) established the Interagency Ecosystem Management Task Force which issued a report titled ‘The Ecosystem Approach: Healthy Ecosystems and Sustainable Economies’ ( IEMTF, 1995). In response to the recommendations of the task force, the OEP (1995) executed its ‘Memorandum of Understanding to Foster the Ecosystem Approach’. This action led to adoption of the White House’s ecosystem management policy throughout the federal government. By the time that ecosystem management had become U.S. policy, agencies such as the U.S. Forest Service (FS) and those of the U.S. Department of the Interior (DOI) had already adopted such policies (Szaro et al., 1998). Other agencies soon followed suit and enacted their own ecosystem management policies (Malone, 1998a and Malone, 1998b). The significance of the Federal Ecosystem Management Initiative is reflected in the fact that together, the FS and the DOI manage about 700 million acres of public land, more than one-fourth of the U.S. This is especially important in the western U.S. where the majority of public lands are located. A consequence of the federal initiative has been that some economic interests in the west, e.g. timber, livestock, and fishery industries, have been curtailed on public lands. Under these pressures, western states have acted through the Western Governors’ Association to adopt the Enlibra doctrine (Malone, 1999 and WGA, 1999). Enlibra is an emerging effort at the state level to give various interests within states greater influence in federal ecosystem management activities. Oregon and Washington, in particular, have ecosystem management programs underway that involve timber, fishery, economic and environmental interests. These activities come from compromises reached through collaboration between state and federal agencies and other stakeholders. California also is involved in ecosystem management activities, perhaps even to a greater extent than are Oregon and Washington. However, the policies and programs involved in California are less conspicuous and politically purposeful than in the other two coastal states. Several states in the eastern half of the U.S. are also adopting policies and practices based on ecosystem management. Notable among them are Florida, Illinois, New York, North Carolina, Minnesota, and Wisconsin. As ecosystem-based management of renewable natural resources takes hold, other states are likely to adopt similar stewardship policies to foster sustainable development. Thus, ecosystem management is replacing traditional commodity-oriented management of renewable resources, such as forests, grazing lands, fish, and water. With ecosystem management policies having infused the federal government, it is natural that attention is turning to state government. Discussed here are the highlights of the ecosystem management concept and the emerging nature of state policies and programs based on the concept. This perspective is important because of the controversies associated with ecosystem management in much of the western U.S. and in some other regions as well. These have been discussed elsewhere (Malone, 1998a and TKC, 1996). Ecosystem management also involves the relative roles and rights of federal and state governments in managing public natural resources.