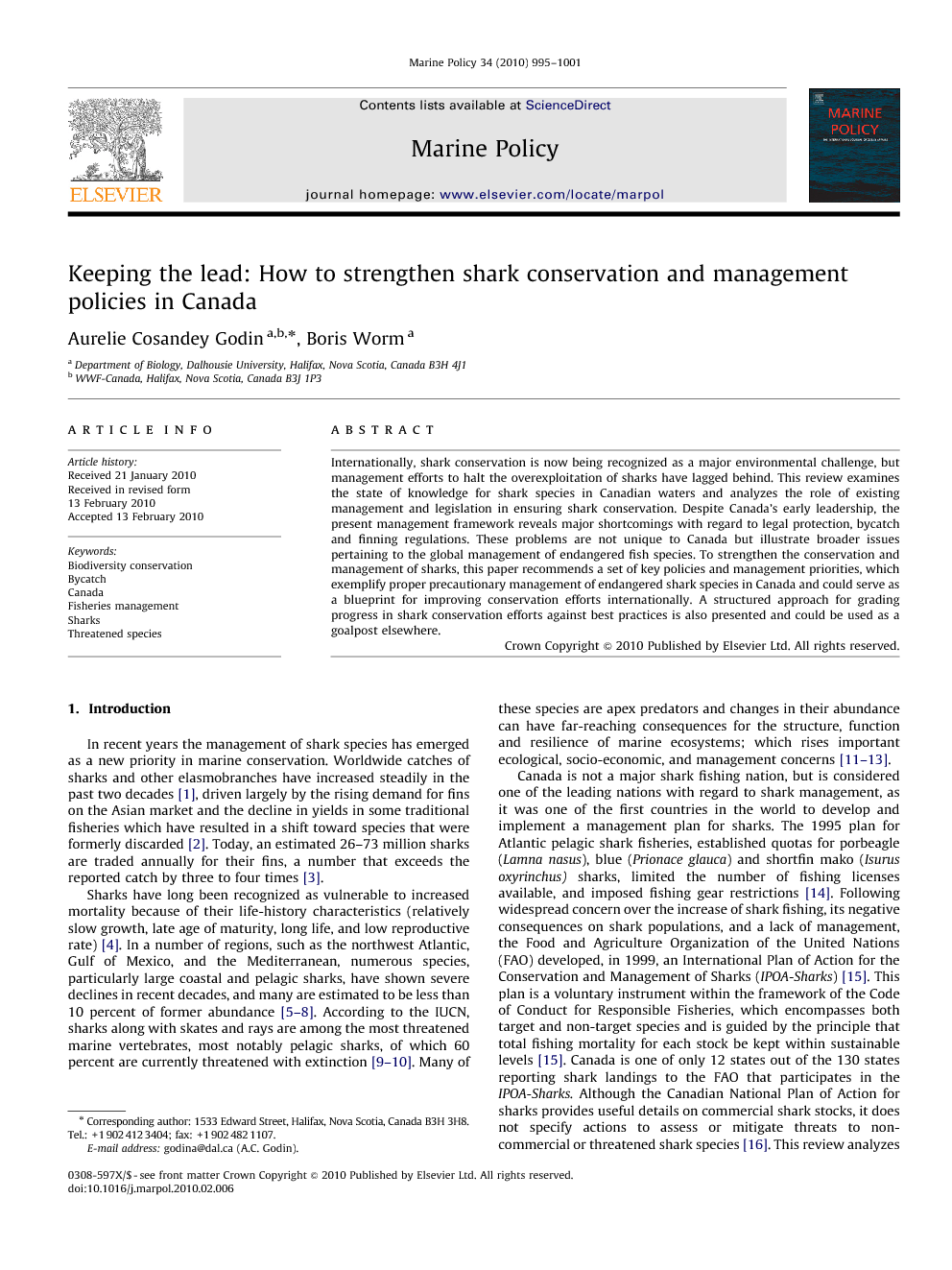 Internationally, shark conservation is now being recognized as a major environmental challenge, but management efforts to halt the overexploitation of sharks have lagged behind. This review examines the state of knowledge for shark species in Canadian waters and analyzes the role of existing management and legislation in ensuring shark conservation. Despite Canada's early leadership, the present management framework reveals major shortcomings with regard to legal protection, bycatch and finning regulations. These problems are not unique to Canada but illustrate broader issues pertaining to the global management of endangered fish species. To strengthen the conservation and management of sharks, this paper recommends a set of key policies and management priorities, which exemplify proper precautionary management of endangered shark species in Canada and could serve as a blueprint for improving conservation efforts internationally. A structured approach for grading progress in shark conservation efforts against best practices is also presented and could be used as a goalpost elsewhere.

In recent years the management of shark species has emerged as a new priority in marine conservation. Worldwide catches of sharks and other elasmobranches have increased steadily in the past two decades [1], driven largely by the rising demand for fins on the Asian market and the decline in yields in some traditional fisheries which have resulted in a shift toward species that were formerly discarded [2]. Today, an estimated 26–73 million sharks are traded annually for their fins, a number that exceeds the reported catch by three to four times [3]. Sharks have long been recognized as vulnerable to increased mortality because of their life-history characteristics (relatively slow growth, late age of maturity, long life, and low reproductive rate) [4]. In a number of regions, such as the northwest Atlantic, Gulf of Mexico, and the Mediterranean, numerous species, particularly large coastal and pelagic sharks, have shown severe declines in recent decades, and many are estimated to be less than 10 percent of former abundance [5], [6], [7] and [8]. According to the IUCN, sharks along with skates and rays are among the most threatened marine vertebrates, most notably pelagic sharks, of which 60 percent are currently threatened with extinction [9] and [10]. Many of these species are apex predators and changes in their abundance can have far-reaching consequences for the structure, function and resilience of marine ecosystems; which rises important ecological, socio-economic, and management concerns [11], [12] and [13]. Canada is not a major shark fishing nation, but is considered one of the leading nations with regard to shark management, as it was one of the first countries in the world to develop and implement a management plan for sharks. The 1995 plan for Atlantic pelagic shark fisheries, established quotas for porbeagle (Lamna nasus), blue (Prionace glauca) and shortfin mako (Isurus oxyrinchus) sharks, limited the number of fishing licenses available, and imposed fishing gear restrictions [14]. Following widespread concern over the increase of shark fishing, its negative consequences on shark populations, and a lack of management, the Food and Agriculture Organization of the United Nations (FAO) developed, in 1999, an International Plan of Action for the Conservation and Management of Sharks (IPOA-Sharks) [15]. This plan is a voluntary instrument within the framework of the Code of Conduct for Responsible Fisheries, which encompasses both target and non-target species and is guided by the principle that total fishing mortality for each stock be kept within sustainable levels [15]. Canada is one of only 12 states out of the 130 states reporting shark landings to the FAO that participates in the IPOA-Sharks. Although the Canadian National Plan of Action for sharks provides useful details on commercial shark stocks, it does not specify actions to assess or mitigate threats to non-commercial or threatened shark species [16]. This review analyzes to what extent the existing management framework protects shark species (Superorder Selachimorpha) in Canada. Our goals in this study were to evaluate the current state of knowledge, the role of existing legislation for sharks in Canada, discuss success and limitations, and highlight priorities for the management of sharks in Canada, and internationally.

The current Canadian management framework for shark populations is fairly well developed, but still presents major shortcomings when gauged again best practices (Fig. 1). Currently, the SARA listing process has not yet yielded any meaningful protection measures for sharks, the state of knowledge is low for non-commercial species, and regulations governing shark bycatch in Canada do not limit total mortality. In addition, lethal shark derbies in the Maritimes, the growing interest for these events, and the message conveyed to the public, raise serious concerns, despite the fact that shark mortality associated with these tournaments is low compared to commercial fishing activities. These regional problems may illustrate broader issues pertaining to the global management of shark species. Shark conservation is challenging, as many species are highly migratory and several countries share the management of single stocks. Although many species of oceanic sharks are defined as highly migratory species under the United Nations Convention on the Law of the Sea (UNCLOS) and fall under the mandate of RFMOs and Conventions, to date, very few actions to conserve sharks have been undertaken by these organizations. Measures are primarily related to the control of shark finning (5 percent ratio rule) and encouraging the reporting of shark catches, yet there are still no limitations for the harvesting of sharks or direct measures to protect vulnerable species in international waters (reviewed in [50]). In order to achieve effective international cooperation, strong national commitment and leadership are needed. Through appropriate management actions, exploitation rates can be reduced in order to allow sensitive species to recover from overexploitation [43]. We acknowledge that any success in management relies heavily on the regional context, and the dynamic of the fisheries, ecosystem, and governance regimes. Nonetheless, in order to strengthen established shark conservation goals, this paper identifies new policies for Canada, which apply broadly to the management of sharks by other shark fishing nations, and potentially the high seas. Many shark populations have been dramatically reduced, and stringent management measures are required to ensure their persistence and recovery. 1. Proactive protection: Even prior to listing species under endangered species law and developing species recovery plans, species of known conservation concern could be readily protected by mandating that all live individuals should be released unharmed under current fisheries management rules. This precautionary measure would reduce total mortality immediately, considering that compliance, monitoring and enforcement are adequate. 2. Strengthening monitoring, increasing knowledge: Scientific knowledge is greatly dependant on monitoring efforts. Achieving 100 percent observer coverage in fisheries with high incidental catch of sharks (possibly augmented by electronic monitoring), would decisively improve estimates of shark bycatch, abundance, and distribution. Likewise independent-fishery shark surveys are important in the assessment of shark populations, and the monitoring of their recovery. These measures will result in substantial and more accurate data, which could be used to develop initial population status reports for all common shark species, including those that are not commercially fished. 3. Innovations: reducing unnecessary mortality: Further measures are needed to mitigate incidental mortality. Implementation of specific gear modifications or spatial management should be investigated further to either reduce the likelihood of shark interactions or discard mortality. Examples of such practices include the Australian and South African tuna and billfish fisheries, which have prohibited the use of wire trace; known to be associated with higher shark, catch rates [51] and [52]. The use of circle hooks has been shown to reduce the likelihood of blue shark mortality by decreasing chances of deep-hooking in Canadian waters [42]. In addition, on pelagic longlines, blue shark mortality varies significantly between individual vessels, reflecting different practices [42]. Ripping the hook out of the fish, which sometimes removes the jaw, and body-gaffing are two common practices on Canadian vessels, and probably elsewhere [42]. These practices produce severe trauma in sharks and decrease significantly their chance of post-hooking survival [42]. The development and enforcement of handling and release practices in cooperation with fishermen could substantially minimize such injuries. Other factors such as the use of fish instead of squid bait, or reducing the soak time of pelagic longline gear, tend to result in lower shark catch rates while maintaining high yield, yet their effect may vary among species and regions [51]. Improved gear technology could potentially reduce incidental catches and discard mortality of sharks, but further investigation and testing of such practices are required. Ultimately, total allowable catches need to fully account for all sources of discard mortality, and incentives could be developed to minimize these sources of mortality [53]. 4. Adopt ‘fins-attached’ policy: Finning regulations, although effective in the Canadian context could easily be changed to adopt a more precautionary policy and reaffirming Canada's engagement in support of shark conservation. Advantages of a fins-attached policy go beyond catch reduction; fins can be cut carefully once landed, in order to get the highest fin quality and market price as well as facilitating species identification and reducing enforcement burden, as fins do not need to be weighed separately [46] and [50]. 5. Recreational shark fisheries: catch and release only: Across Canada, recreational fisheries regulations should adopt catch-and-release policies for all sharks, without exception. Prohibiting lethal shark derbies and replacing them with tag and release programmes that promote shark education, conservation, and scientific research would demonstrate a precautionary approach to shark management and support other efforts for the conservation of shark species in Canada, and elsewhere.