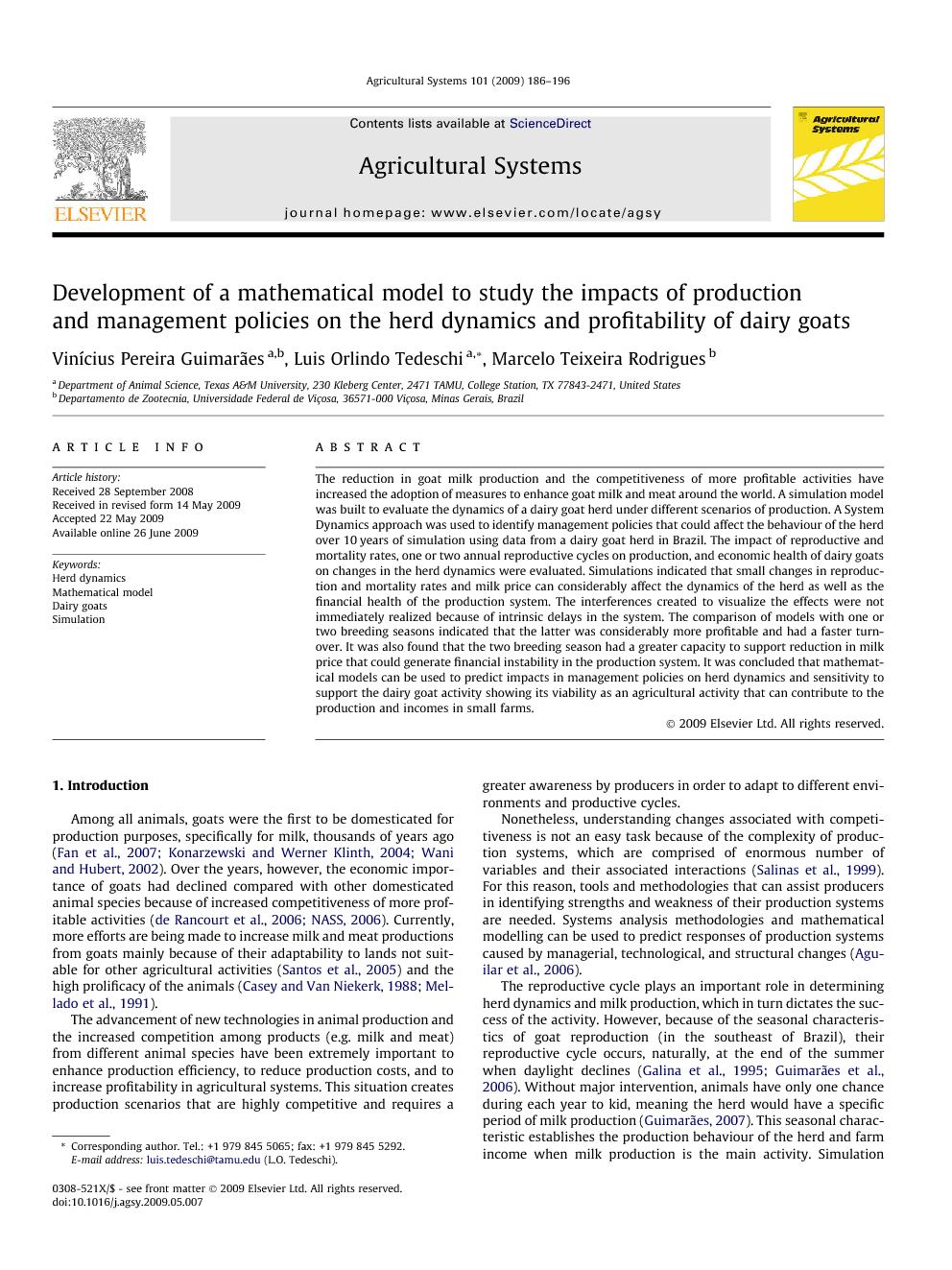 The reduction in goat milk production and the competitiveness of more profitable activities have increased the adoption of measures to enhance goat milk and meat around the world. A simulation model was built to evaluate the dynamics of a dairy goat herd under different scenarios of production. A System Dynamics approach was used to identify management policies that could affect the behaviour of the herd over 10 years of simulation using data from a dairy goat herd in Brazil. The impact of reproductive and mortality rates, one or two annual reproductive cycles on production, and economic health of dairy goats on changes in the herd dynamics were evaluated. Simulations indicated that small changes in reproduction and mortality rates and milk price can considerably affect the dynamics of the herd as well as the financial health of the production system. The interferences created to visualize the effects were not immediately realized because of intrinsic delays in the system. The comparison of models with one or two breeding seasons indicated that the latter was considerably more profitable and had a faster turnover. It was also found that the two breeding season had a greater capacity to support reduction in milk price that could generate financial instability in the production system. It was concluded that mathematical models can be used to predict impacts in management policies on herd dynamics and sensitivity to support the dairy goat activity showing its viability as an agricultural activity that can contribute to the production and incomes in small farms.

Among all animals, goats were the first to be domesticated for production purposes, specifically for milk, thousands of years ago (Fan et al., 2007, Konarzewski and Werner Klinth, 2004 and Wani and Hubert, 2002). Over the years, however, the economic importance of goats had declined compared with other domesticated animal species because of increased competitiveness of more profitable activities (de Rancourt et al., 2006 and NASS, 2006). Currently, more efforts are being made to increase milk and meat productions from goats mainly because of their adaptability to lands not suitable for other agricultural activities (Santos et al., 2005) and the high prolificacy of the animals (Casey and Van Niekerk, 1988 and Mellado et al., 1991). The advancement of new technologies in animal production and the increased competition among products (e.g. milk and meat) from different animal species have been extremely important to enhance production efficiency, to reduce production costs, and to increase profitability in agricultural systems. This situation creates production scenarios that are highly competitive and requires a greater awareness by producers in order to adapt to different environments and productive cycles. Nonetheless, understanding changes associated with competitiveness is not an easy task because of the complexity of production systems, which are comprised of enormous number of variables and their associated interactions (Salinas et al., 1999). For this reason, tools and methodologies that can assist producers in identifying strengths and weakness of their production systems are needed. Systems analysis methodologies and mathematical modelling can be used to predict responses of production systems caused by managerial, technological, and structural changes (Aguilar et al., 2006). The reproductive cycle plays an important role in determining herd dynamics and milk production, which in turn dictates the success of the activity. However, because of the seasonal characteristics of goat reproduction (in the southeast of Brazil), their reproductive cycle occurs, naturally, at the end of the summer when daylight declines (Galina et al., 1995 and Guimarães et al., 2006). Without major intervention, animals have only one chance during each year to kid, meaning the herd would have a specific period of milk production (Guimarães, 2007). This seasonal characteristic establishes the production behaviour of the herd and farm income when milk production is the main activity. Simulation models can be used to quickly analyze behavioural changes in a dairy goat farm (Roberts et al., 1983) that otherwise would take years to be observed in practice. Therefore, the main objective of this study was to use the System Dynamics methodology to develop a dynamic model to analyze key biological aspects that interfere in management practices that may affect the dynamics of a herd in a dairy goat farm. Other objectives included the evaluation of the impact of one or two annual reproductive cycles on the production and economic health of dairy goats and the identification of differences of production costs and revenues associated with changes in the herd dynamics.

This paper described and discussed the structure of a model using the System Dynamics approach to provide the framework necessary and sufficient to understand herd dynamics of dairy goats. Key variables that may affect the overall system performance were identified. The key point in the success was the management of the activity regarding reproductive and sanitary aspects. Our simulations demonstrated the two breeding season scenario was considerably more profitable and had a higher turnover than the model with one breeding season, indicating that number of breeding seasons can be used to enhance profitability and capacity to support market price oscillations. The study of the population dynamics is fundamental to understand decision making and feedback responses in agricultural systems. Mathematical models can be used as decision tools to predict the impacts of management policies on herd dynamics and sensitivity analysis to assist the dairy goat activity. Future work is needed to include exogenous variables into the current model and challenge the model for different production scenarios.