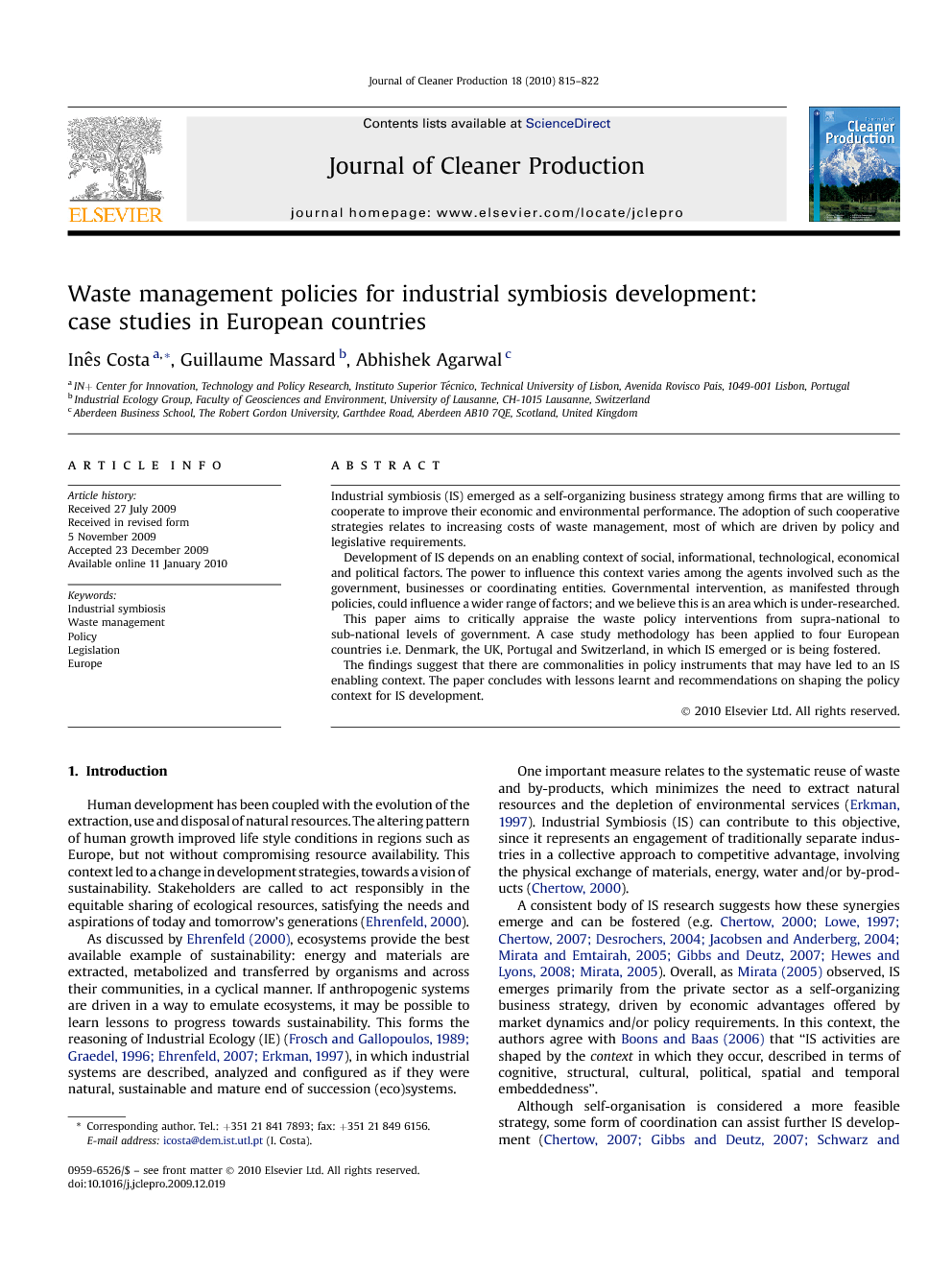 Industrial symbiosis (IS) emerged as a self-organizing business strategy among firms that are willing to cooperate to improve their economic and environmental performance. The adoption of such cooperative strategies relates to increasing costs of waste management, most of which are driven by policy and legislative requirements. Development of IS depends on an enabling context of social, informational, technological, economical and political factors. The power to influence this context varies among the agents involved such as the government, businesses or coordinating entities. Governmental intervention, as manifested through policies, could influence a wider range of factors; and we believe this is an area which is under-researched. This paper aims to critically appraise the waste policy interventions from supra-national to sub-national levels of government. A case study methodology has been applied to four European countries i.e. Denmark, the UK, Portugal and Switzerland, in which IS emerged or is being fostered. The findings suggest that there are commonalities in policy instruments that may have led to an IS enabling context. The paper concludes with lessons learnt and recommendations on shaping the policy context for IS development.

Human development has been coupled with the evolution of the extraction, use and disposal of natural resources. The altering pattern of human growth improved life style conditions in regions such as Europe, but not without compromising resource availability. This context led to a change in development strategies, towards a vision of sustainability. Stakeholders are called to act responsibly in the equitable sharing of ecological resources, satisfying the needs and aspirations of today and tomorrow's generations (Ehrenfeld, 2000). As discussed by Ehrenfeld (2000), ecosystems provide the best available example of sustainability: energy and materials are extracted, metabolized and transferred by organisms and across their communities, in a cyclical manner. If anthropogenic systems are driven in a way to emulate ecosystems, it may be possible to learn lessons to progress towards sustainability. This forms the reasoning of Industrial Ecology (IE) (Frosch and Gallopoulos,, Graedel,, Ehrenfeld, and Erkman, 1997), in which industrial systems are described, analyzed and configured as if they were natural, sustainable and mature end of succession (eco)systems. One important measure relates to the systematic reuse of waste and by-products, which minimizes the need to extract natural resources and the depletion of environmental services (Erkman, 1997). Industrial Symbiosis (IS) can contribute to this objective, since it represents an engagement of traditionally separate industries in a collective approach to competitive advantage, involving the physical exchange of materials, energy, water and/or by-products (Chertow, 2000). A consistent body of IS research suggests how these synergies emerge and can be fostered (e.g. Chertow, 2000, Lowe,, Chertow, 2007, Desrochers, 2004, Jacobsen and Anderberg, 2004, Mirata and Emtairah,, Gibbs and Deutz, 2007, Hewes and Lyons, and Mirata, 2005). Overall, as Mirata (2005) observed, IS emerges primarily from the private sector as a self-organizing business strategy, driven by economic advantages offered by market dynamics and/or policy requirements. In this context, the authors agree with Boons and Baas (2006) that “IS activities are shaped by the context in which they occur, described in terms of cognitive, structural, cultural, political, spatial and temporal embeddedness”. Although self-organisation is considered a more feasible strategy, some form of coordination can assist further IS development (Chertow, 2007, Gibbs and Deutz, 2007, Schwarz and Steininger, and Mirata,). For example, Gibbs and Deutz (2007) mention the catalytic role of the Centre for Alternative Technology in Wales in enabling relationships between businesses, leading to potential eco-industrial developments. However, coordinating bodies are only able to influence some factors within the context, namely informational, organisational and human related, in a fairly localized manner. As Baas (2008) stated, “actors are not equally able to influence each other's actions and system outcomes, which needs to be taken into account much more fully within IS development”. Governmental policies are also regarded as being able to influence a wider range of factors (Gibbs and Deutz, 2007, Mirata, 2005 and Baas, 2008). For example, in the Rotterdam region, after a period of strong environmental regulations, the national and sub-national governments facilitated programmes to strengthen economic and environmental performance in industry, including the partial funding of IS projects (Baas, 2008 and Baas and Boons, 2004). However, policies can also pose barriers to IS (e.g. (Chertow, 2007, Desrochers, 2004 and Desrochers, 2000)). For example, Desrochers (2000) mentioned if Danish regulation were to be similar to U.S. regulation IS development at Kalundborg “would be a very difficult if not impossible task”. In the Rotterdam case, Baas (2008) observed that although the regulator engaged with the companies to adjust rules, the policy environment still perceived synergies as handling waste rather than reusing resources. Since “the role of power is hardly discussed systematically in the IS field” (Baas, 2008), our contribution to this discussion resides on the analysis of governmental influences in the IS development contexts of four European-based case studies. Using a common set of descriptors, cases are analyzed and contrasted in order to identify characteristics of particular governmental jurisdictions that are conducive to IS. The paper is structured as follows. This section establishes the theoretical reasoning of the paper. Section 2 outlines the structures that support policy development for the European context, and Section 3 introduces the research framework. The case studies are presented in Section 4, followed by the discussion of the results (Section 5). The paper ends with the conclusions, in Section 6.

This research sought to better understand legislative and policy contexts in cases where IS networks are developing and the potential contribution that IS can make to the implementation of the EU Waste Directive. As a general conclusion, it appears evident that governmental institutions could greatly contribute to shape the context underlying IS development. The case studies analyzed provide some insights on potentially influential factors: flexible regulation in waste management (mainly associated to sub-national levels) together with strong economic/regulatory instruments, deployed nationally, that penalizes lower hierarchy waste management options. Voluntary instruments, in the form of coordination programmes, could provide information and facilitation assistance for companies to identify economically viable alternatives for their wastes. In this context, policy and legislation can positively influence IS development by setting clear objectives and supporting business eco efficiency activities. This sends important signals to the market that guides businesses to IS related actions, without direct governmental intervention in that process. However, some difficulty persists in coordinating policies and actions across the supra-national, national and sub-national levels of government. If there is enough flexibility to implement innovative, locally adaptable solutions and transfer their associated knowledge across levels, it is possible to contribute to more effective waste policies and shape the context for industrial symbiosis.